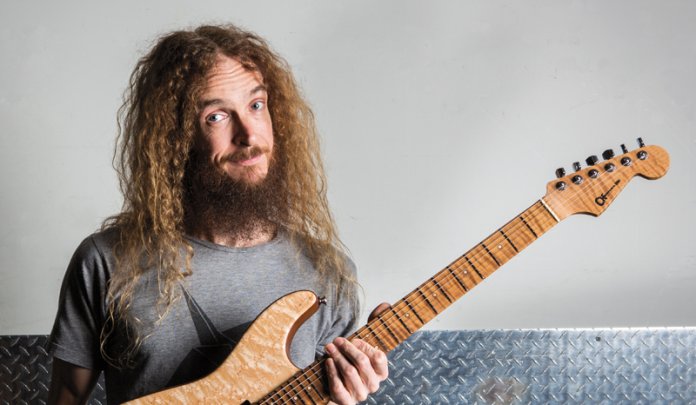 1) Think in phrases
One specific way to apply the ‘speech’ analogy is to think in phrases when you play. Melodic ideas work generally on the basis of grouping several notes together and then leaving a gap – a pause for breath, if you will – and listeners will instinctively respond well to hearing ideas spaced out in this way. This is loosely equivalent to thinking one word (or small group of words) at a time, rather than one letter at a time it’s often easier to make sense when you’re dealing with a smaller quantity of bigger ideas, rather than thinking on a purely note-by-note basis.

2) Develop your ear
Your ultimate improvisational goal should surely be this: the freedom to imagine any melody that you would like to hear coming out of your amplifier, coupled with the ability to translate that same sound instantly from your imagination directly onto your fingerboard. Therein lies total freedom… but, of course, developing this does require one fundamental asset: a good ear.

It’s enormously beneficial to work on interval recognition and transcription skills, so do try to work out as much music as possible using just your ear. This admittedly takes some willpower, in a day and age when transcriptions and video tutorials are abundantly available for pretty much anything you could want to learn, but it’s really worth making the effort to become a more self-sufficient player. If you’re able to replicate what you hear someone else playing, that skill will help you immeasurably when you’re trying to replicate the music you hear in your own head.

Do bear in mind that you’ll end up with more well-rounded transcription chops if you aim to transcribe ideas culled from as many different genres as possible: also, it doesn’t hurt to work out some of what you hear being played by instruments other than guitar!

3) Mean what you play
I think it’s important to establish a real connection with your instrument: your guitar should feel like part of you, rather than like some machine that you use to generate scale patterns. 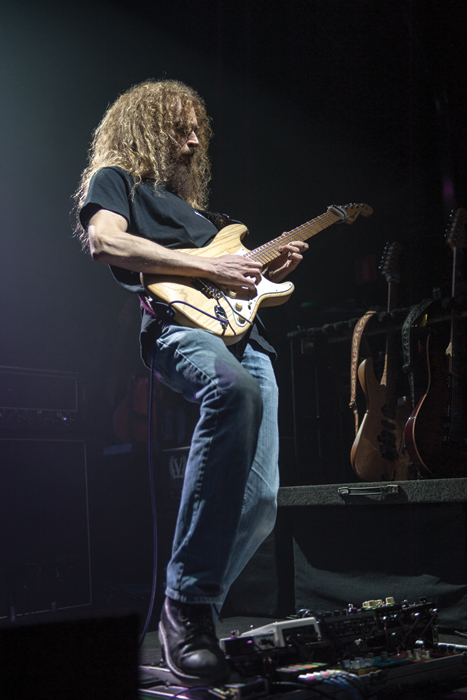 To develop this kind of connection, it’s really helpful to adopt the habit of singing what you play (think George Benson!). This eventually makes you feel as if you’re actually responsible for the notes you play, rather than just relying on your fingers to execute a series of memorised patterns: if you can ‘hear’ the note you’re about to play a split second before it comes through your amp, this will enhance the feeling that you caused that note to happen.

This approach, incidentally, is applicable not only to your improvisational moments but also, in a broader sense, to everything you play, including any new exercise or morsel of theory. If you can internalise what that kind of knowledge sounds like, in addition to what it looks and feels like, you’ll eventually absorb it in a much more musically useful way!

4) Explore rhythm
You can get a lot more mileage out of the licks you already know by experimenting with rhythmic variations. Having some degree of familiarity with concepts such as rhythmic displacement and polyrhythms can give you a lot more freedom in terms of how much you can draw from your existing bag of licks before you start to repeat yourself!

5) Listen
We all find ourselves feeling devoid of inspiration from time to time: even if you have the most finely honed ear imaginable, there might be times when you just can’t think of anything worth playing. This dilemma can be addressed simply by expanding your listening diet: by constantly seeking out fresh music and trying to listen to it actively and intelligently, you’ll absorb all kinds of new phrasing ideas on a subconscious level, and aspects of this will start to emerge in your playing, keeping things sounding reassuringly fresh. This is essentially a musical version of the old adage: “you are what you eat”!

6) Listen some more
The previous tips have applied mostly to things you can do when you’re practising – things that help you to prepare for those improvisational moments. Here’s one that applies to ‘The Moment’ itself…

If you’re on stage somewhere and your inspiration suddenly dries up, try to become more aware of what everyone else in the band is doing. Striving to have a musical conversation with your fellow musicians will generate an atmosphere that’s much more conducive to creativity… if you keep yourself confined within your own little guitarist bubble, it can be much harder to conjure a meaningful musical statement out of thin air, because you’ll be oblivious to all kinds of external stimuli, which could otherwise be serving as inspirational triggers.

Odd though it may sound, having a similar kind of musical conversation with yourself can sometimes help you to make more musical sense: if you’re having difficulty working out what to play next, it can often be helpful to try to think back to the last phrase you played and then try somehow to expand on that… taking a kind of question and answer approach.

7) Communicate naturally
I’ve encountered a lot of players who are intimidated by the idea of improvisation. Perhaps not surprisingly, the players who find it the hardest to ‘let themselves go’ are typically the ones who devote the bulk of their practice time to working on technical exercises and learning transcriptions of other people’s music – after all, your strengths and weaknesses as a player are invariably a product of how you choose to spend your time with the instrument… 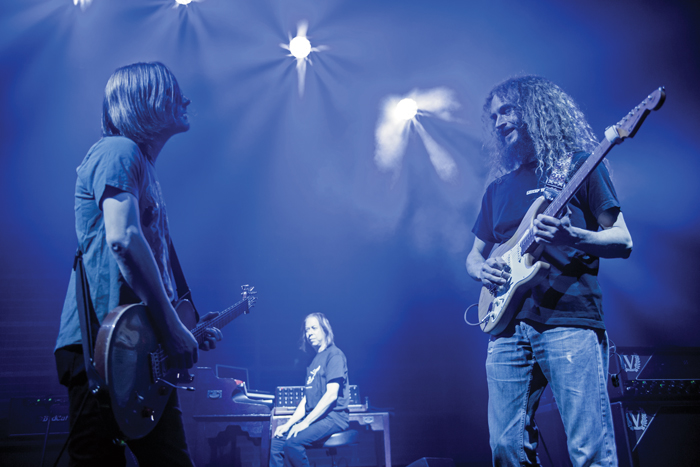 One way to overcome such fear is to remember that music is essentially just a language, and then to consider this: as soon as we put the instrument down and revert to using the more ‘familiar’ language in which we speak to each other on a daily basis, every one of us becomes a fluent improviser. When talking, we can effortlessly and spontaneously express a wide range of feelings and thoughts, frequently applying complex rules of grammar and syntax in the process, without even being consciously aware of what we’re doing (when did you ever catch yourself wondering, mid-conversation, whether the verb you were about to use was transitive or intransitive? When have you ever made a conscious decision to use the subjunctive mood?).

So… the fundamental trick to becoming a more fluid and natural improviser surely lies simply in trying to make playing feel more like talking. Like so many skills, this becomes a little easier every time you do it; in basic terms, the best way to improve your improvisation skills is simply to improvise a lot!

8) Beware of over-thinking
Thinking about scales, theory, phrasing, etc can be very helpful when you’re practising at home, but there’s also a time for simply ‘using The Force’ and trusting your instincts. In my experience, a lot of your most musical and effective improvisational moments will almost certainly occur when you’re not thinking about anything at all.

To borrow some wise words from the mighty Charlie Parker: “You’ve got to learn your instrument. Then you practise, practise, practise. And then, when you finally get up there on the bandstand, forget all that and just wail.” 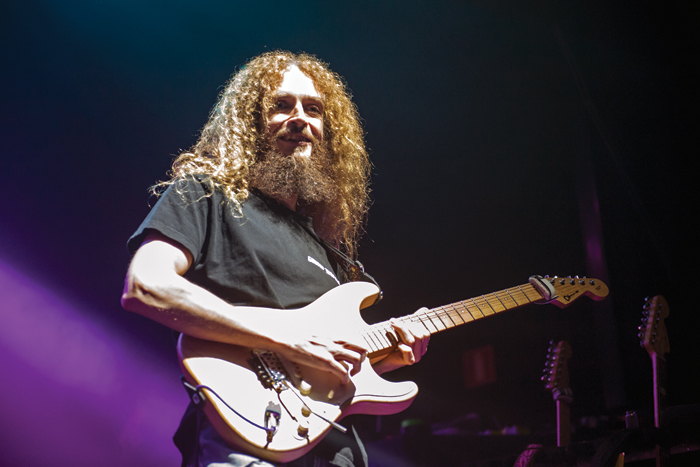 9) Be reckless if necessary and enjoy yourself
It’s good to take risks every now and then. Obsessive perfectionism can hamper your flow: sometimes, it’s better to try an idea without knowing for sure whether it will work or not, as opposed to playing it safe all the time. When you’re improvising, you have the freedom to do whatever you want to, so… why not embrace that freedom and enjoy it?!

10) Apply theory with musicality
There’s no harm in learning as many scales and arpeggios as possible – quite the opposite, in fact – but some players seem to expect scales to solve problems that in fact they were never designed to solve. You use scales when you improvise in much the same way that you would use the alphabet when writing a poem – an essential part of the process though it may be, the alphabet alone is obviously not enough!
As soon as you’ve learned the shape (and sound) of any given scale, try jumbling the notes up in as many ways as possible – and be wary of traps such as always starting from the lowest note! It can be helpful to fire up an appropriate backing track and play the scale at an excruciatingly slow speed, counter-intuitive though this may feel, as doing so will help you to develop some sense of the different ‘colour’ and mood evoked by each component note. You can use the component notes of a scale much more musically if you’re aware of the unique character that each one possesses, relative to the harmonic context.

As a related ‘rut-buster’, one interesting approach is to spend some time improvising whole phrases on just one string: this forces you to think more ‘vocally’ and prevents your fingers from merely relying on a series of rehearsed patterns.

Guthrie Govan is currently on tour with The Aristocrats. Find out more by visiting the official Aristocrats website.