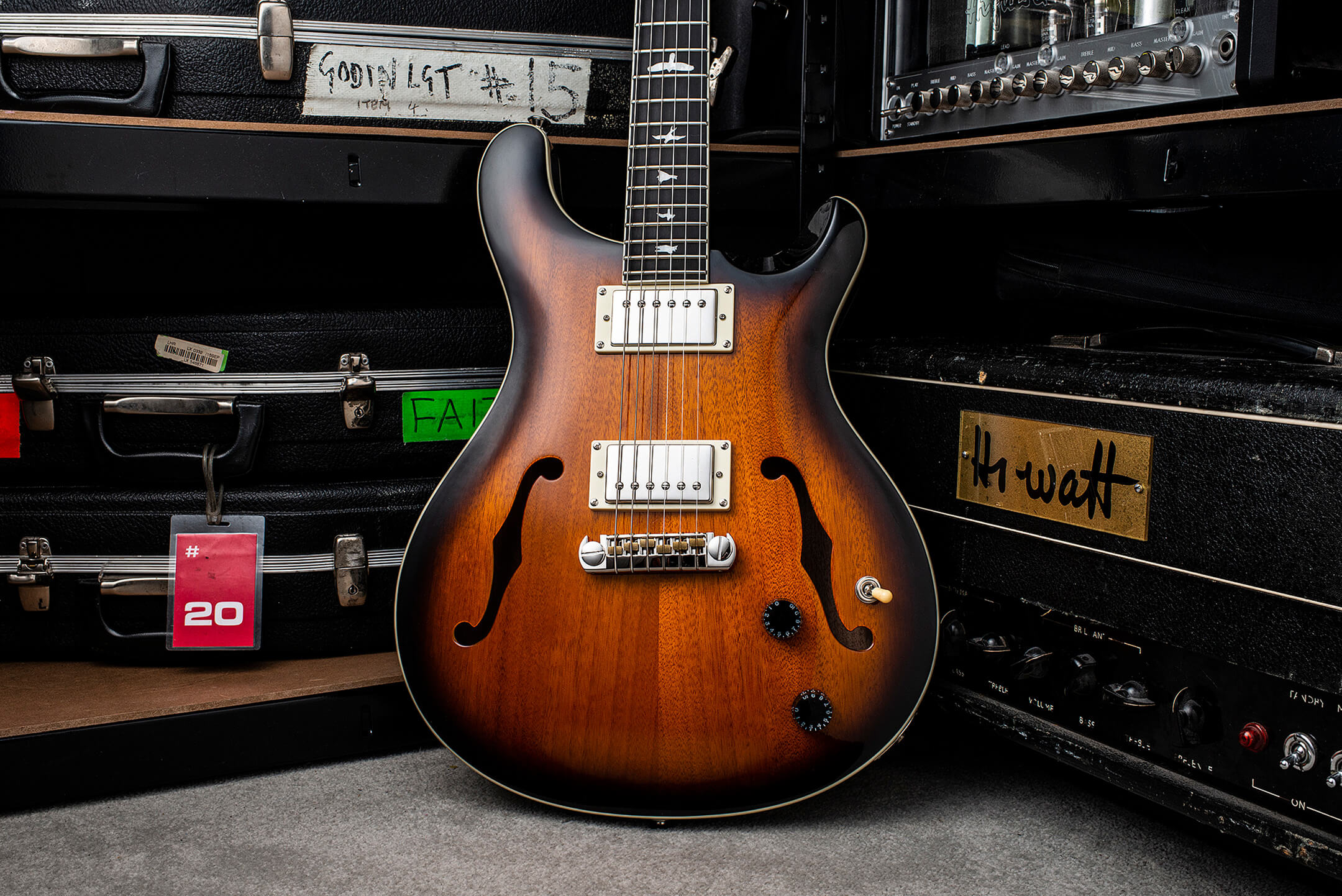 A brief history of PRS Guitars

From a college project guitar build to endorsements by the likes of John Mayer, Carlos Santana and Mark Tremonti, the history of PRS helps us better understand the guitar giant today.

A relative newcomer to the game, PRS has managed to join the likes of Fender and Gibson in the upper echelons of electric guitar legacy. Known for their superb playability, crisp and detailed sound, impeccable build quality and eye-catching finishes, Paul Reed Smith guitars are used all over the world by a wide range of players and are deserved of every bit of praise they get. But how did this one-man operation become one of the biggest names in modern guitar? Well, it started with one man and three names

Paul Reed Smith was always a hands on kinda guy when it came to music, and built his first guitar for a college study in 1975. Before then, he’d worked in a guitar repair workshop (including working on guitars for Aerosmith) so had built up a wealth of knowledge. This first guitar build helped ignite the spark, and over the next 10 years, Paul experimented with different wood combinations, building processes, body shapes and hardware designs to hone in on his style of guitar building.

Averaging around one guitar a month, Smith would then test them himself at gigs, as well as hang around at concerts to try and get them in the hands of touring artists. Even early on, before branding them with his own name, the first ever guitar to feature the now famous bird inlays was built specially for Peter Frampton. In these early days, he managed to amass a few big names endorsing his instruments, including Al Di Meola, Ted Nugent and Carlos Santana.

The aim was to make something roughly in between Gibson and Fender, with the original PRS Custom body shape sharing some similar curves with a Strat and a Les Paul. He wanted to make it look, feel and sound as good as possible, and because PRS weren’t necessarily tied to traditions of the past like some older guitar companies, they were able to utilise whatever method led to the greatest results.

Things were looking up, with a good few orders for Paul’s new guitars from artists, and, following a successful first trip to the NAMM show, he packed up his truck and drove to various dealers on the east coast of America. They were impressed and Smith returned with enough pre-orders to open his own factory in Annapolis, Maryland in 1985. This is also the year that PRS start making its own pickups in-house, allowing the brand to have total control over the tone of the instruments – something that would become a hallmark of Smith’s relentless quest for tone in the ensuing decades.

Less than a year later, production had ramped up at a remarkable rate, and PRS produced its 1,000th guitar on 27 June 1986. A few years later, the brand diversified its offering by introducing the CE range, which featured a bolt-on neck lending a slightly different sound and a more affordable price tag.

Continued innovation in the 90s

In the ensuing decade PRS carried on trying new and wonderful things, including the introduction of the collectable Dragon series, starting with Dragon I in 1992. These were super high-end, garishly eye-catching guitars that featured highly figured woods, an ornate dragon motif inlaid all the way down the fretboard, and very limited numbers. The Dragon’s 22-fret construction was a departure from the usual 24 frets PRS had used inits early days, and eventually led to the birth of the Custom 22 in 1993 – a model that is still widely popular today.

The Dragon was a hugely successful guitar for PRS, and the high-end excess of the design helped to boost the brands fame and visibility. As a result, in 1996 PRS launched its Private Stock range. Effectively PRS’s equivalent of a custom shop, the Private Stock guitars were built by a small and highly skilled set of luthiers, including Paul himself, who set about building world-class guitars, utilising some of the best materials on the planet. For many, the Private Stock instruments represent the very pinnacle of what PRS can do, and by extension, what a great instrument can be. 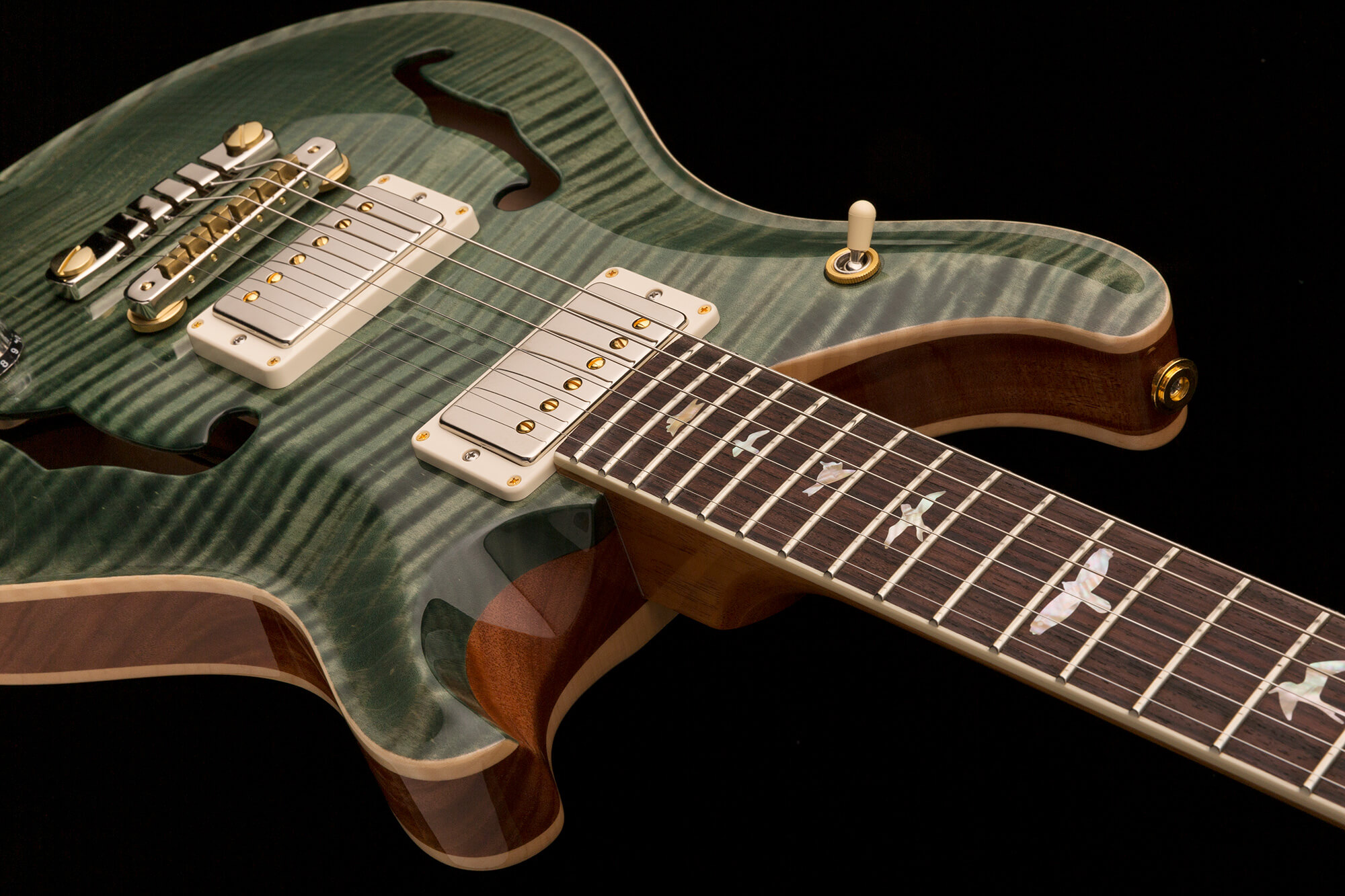 Paul Reed Smith has and will always be a details man, and throughout his career he’s devoted huge amounts of time to reasearching the history of the various components of Goblden Age electric guitar innovation in the hope of unlocking the secrets of great tone. As part of this never-ending quest, one name kept popping up in the list of guitar-related patents – Ted McCarty. McCarty was Gibson’s president in the Golden Era and despite not being much of a guitarist himself, he’s the man behind such game-changing innovations as the humbucker, the Tune-O-Matic tailpiece, as well as iconic designs such as the Explorer, Flying V and SG.

Smith tracked down McCarty, who was well retired by that point and began to pick the legends brains – over the course of these conversations, McCarty and Smith became close, and soon Ted became a consultant for PRS. McCarty acted as a mentor to Paul, who was hungry to learn all about Ted’s previous methods of making guitars and pickups. Paul utilised the advice and guidance from Ted and in 1994 came out with the McCarty model – a twin-humbucker guitar not too dissimilar to a Les Paul and one that laid the groundwork for models that are still available, like the McCarty 594. 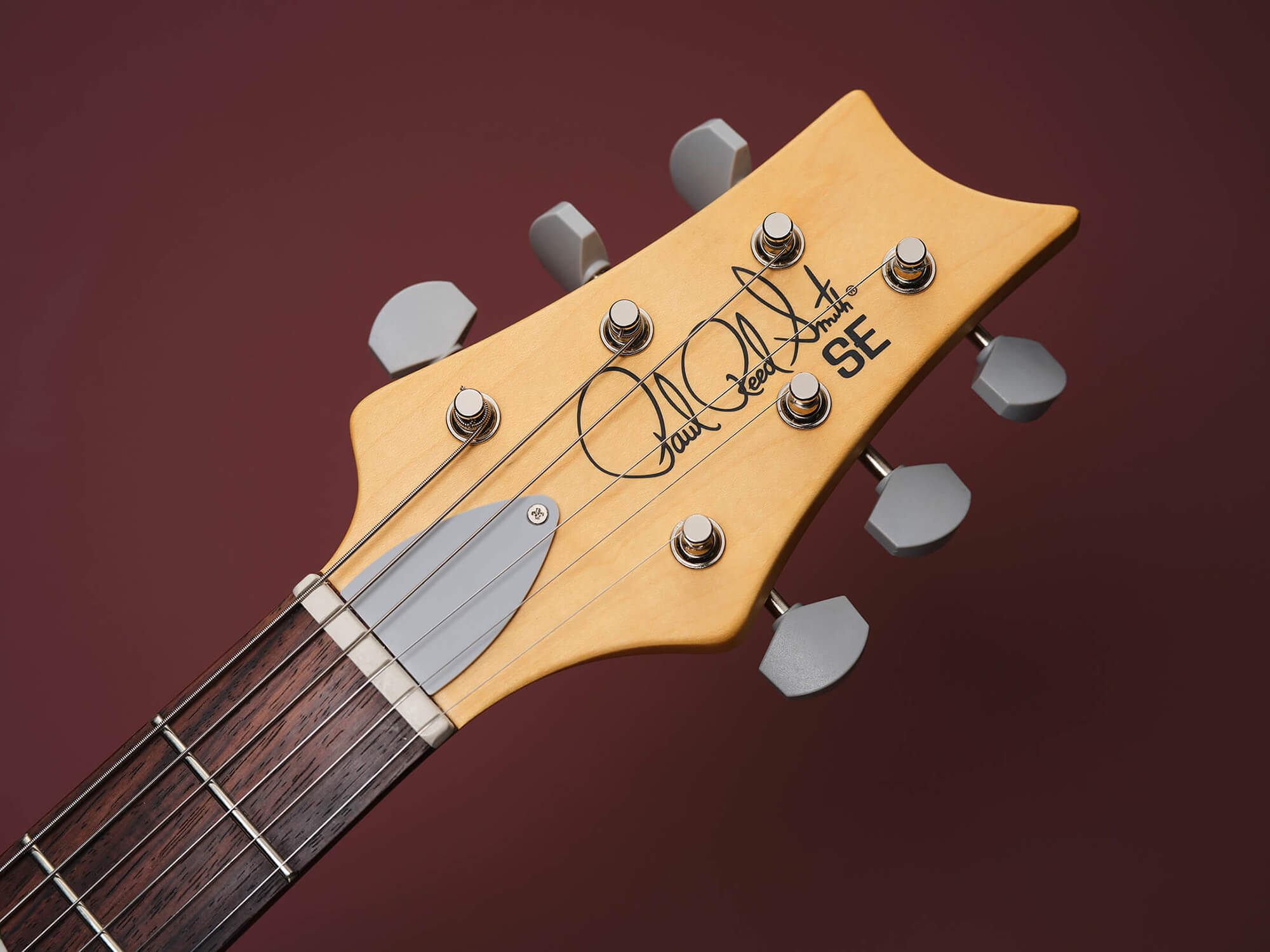 Up until 2001, PRS was a fairly high end guitar brand. The SE range was introduced as a way of bringing the now world-famous guitars to players with a stricter budget. Carlos Santana was actually partly responsible for the SE range as he used to get many requests for a cheaper version of his signature guitar – as such, the first SE guitar was a Santana model.

For the first time, these guitars were made overseas in Korea, though it was a long process. Paul and his team were meticulous about the quality of guitars coming out of the factory and spent years sharing their knowledge on how to build guitars the PRS way. The results were fantastic, and to this day, the SE range represents some of the best bang-for-buck you can find in the world of electric guitars.

One of the most divisive and controversial moments in PRS history is the launch of the Singlecut, and the huge industry-changing legal drama that followed. Launched in 2000 at the first Winter NAMM show of the new millennium, the PRS Singlecut was the company’s first single-cutaway electric. Clearly an evolution of the Gibson Les Paul design, it also saw PRS adopt the twin volume, twin tone and three-way toggle control configuration that featured on the first Goldtops back in 1952.

Although it was far from unique in being inspired by the Les Paul, PRS’s position in the market and reputation for quality meant that the Singlecut was a threat. On 27 March 2000, PRS received a cease and desist letter from Gibson in relation to the manufacture and production of the model.

Later that year, Gibson sued PRS for trademark infringement. PRS filed a counterclaim stating that it hadn’t infringed any valid Gibson trademark and the guitar industry sat mesmerised as two heavyweights prepared to slug it out. What was to follow would, of course, have serious implications for any company that manufactured a single-cutaway solidbody, and there were more than a few anxious faces at ringside.

The ensuing court battle would last for six years and would see Gibson initially claim victory only for PRS to overturn the verdict and win the right to continue making the Singlecut on appeal. Gibson took its fight all the way to the US Supreme Court but in the end PRS prevailed and makers of single-cut guitars across the world breathed a sigh of relief. The Singlecut remains part of PRS’s line-up to this day.

Fewer releases have caused a stir in the guitar community more than the PRS Silver Sky. Whilst it wasn’t PRS’s first foray into the world of single coils, it was a departure from their usual style. It was also very clearly their modern take on a pre-CBS Strat, especially seeing as it was made for, and in conjunction with a well known Fender player – John Mayer. This wasn’t their first collaboration with Mayer, having recently made the incredibly premium Super Eagle guitar for his work with Dead & Company, and the J-MOD signature amp.

Internet forums were ablaze with naysayers – that was until people got their hands on them. The Silver Sky and the more recent SE version, released at the start of 2022, are now some of the most popular guitars that PRS make.

PRS are never a company  that stands still for long. They’re undeniably influenced by the past, though innovation is never shied away from and there’s no doubt that something else new and cutting edge is only around the corner. With their recent foray into the world of effects pedals, we can only wonder at what’s next for PRS.