With everyone from Billy Bragg and Jason Isbell to Ida Mae and Larkin Poe on the bill, this virtual event brought some Nashville live music magic to a lockdown winter. 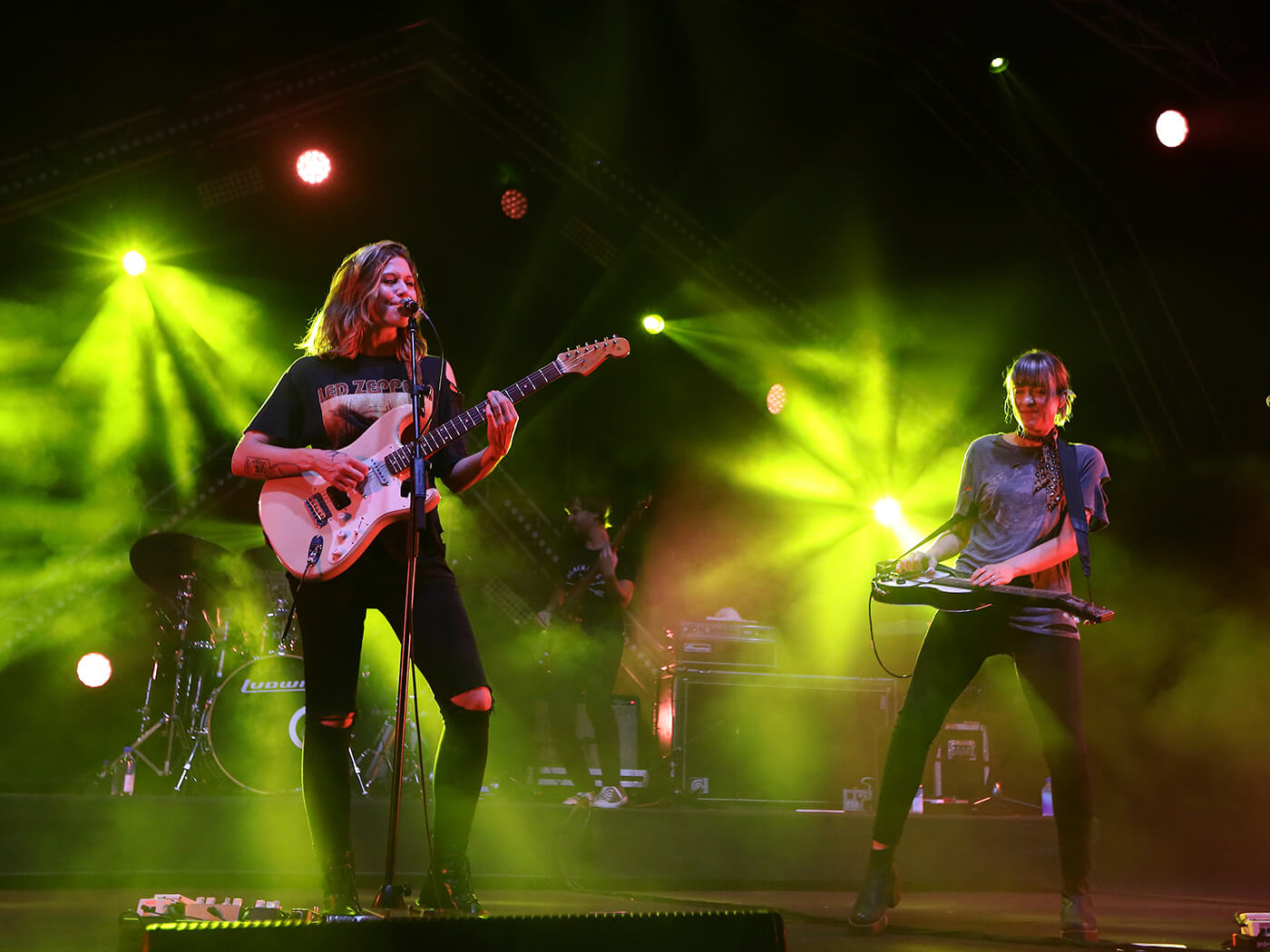 With Glastonbury 2021’s cancellation likely spelling the death of another festival season in the UK, fans of live music got a (purely metaphorical) shot in the arm last week as popular roots UK rhythm and roots celebration AmericanaFest went virtual for the first time, with a bill that for the fourth year in a row had a 50/50 split between male and female artists on the bill.

Late January in lockdown doesn’t offer much in the way of entertainment for anyone, and so the three-day jamboree provided a welcome midweek salve for those of us in attendance, taking advantage of the virtual setting to pull together some of the biggest names in the business alongside some exciting new talent destined for big things, and plenty of wonderful guitar playing to boot.

Even if it’s in your own home, there’s something welcoming and familiar about looking at a festival line-up and virtually circling the performances and acts you want to catch over the course of the weekend, and the first day offered up a heady blend of stripped-down acoustic sets to full-on electrified barnstormers – all from various remote locations, of course.

Another real highlight of day one was, Atlanta born singer-songwriter Katie Pruitt who brought a violin, cello and keys to accompany her fingerpicked SJ-200, creating a mellow, delicate, multi-textured performance that provided the perfect foil to her syrupy sweet vocals. Set closer It’s Always Been You, an ode to Pruitt’s girlfriend, brought matters to a wonderfully emotive and sincere conclusion.

To round out the evening we had Seattle band Massy Ferguson, who certainly dressed the part for an Americana act, and furthered the vibe by performing their set from the midst of a remote woodland. Driving proceedings was guitarist Adam Monda, Guild Starfire IV in hand, pulling out the full country rock trick bag on the likes of Momma’s In The Backseat, pushing out into more esoteric rock territory with the reverb-drenched Powder Blue and blending Americana guitar with 80s keyboards on They Want That Sound – it shouldn’t have worked, but it did.

Vocalist and bassist Ethan Anderson performed with zest and energy, bringing the day to a satisfying close – finale Don’t Give Up On Your Friends saw Anderson toppling into a nearby bush, briefly reminding us of the chaotic brilliance of live music that we all miss so much.

Even before the pandemic made bedroom performances the norm for live music, Larkin Poe’s at-home covers were hugely popular, and so it’s no surprise that the Nashville duo’s living room rendition of songs, primarily from recent LP Self Made Man, is a wonderful blend of polished and powerful.

The pair kick off with a rendition of Holy Ghost Fire that sets the tone for the rest of the set. Rebecca Lovell, sunburst Deco acoustic in hand, takes the lead on vocals and blues Bluegrass guitar as usual, with sister Megan’s trademark Rickenbacker lap-steel adding fiery slide energy on one hand, and beautiful harmonies on the other.

While there’s no guest spot for Rebecca’s husband Tyler Bryant this time, the sisters offer more than enough entertainment, with their wonderful understanding and feisty energy bringing genuine Southern charm to a set that culminates in Back Down South and, with an obligatory quip about surviving the current pandemic, Keep Digging.

Elsewhere, Declan O’Rourke brought soulful, folk ballads, with a trio of violins and a cello that intertwined with his delicate acoustics. He opened with a nod to mass political change in what he called Americana Land, quoting Martin Luther King: “The moral arc of the universe is long, but it bends towards the light.”

Fittingly, O’Rourke performed from a white, stark studio space in Ireland, with the sun beaming optimistically through. He started with emotional track Have You Not Heard The War Is Over from his forthcoming album Arrivals (coming 9 April 2021), and delivered ballads on his Maton electro-acoustic before switching over to his handsome 12-string Guild F512 to add intricately-picked jangle to The Harbour.

It wasn’t all acoustic troubadours on Day 2, however – Southern Avenue brought vibrant funk, soul and blues to proceedings, courtesy of a full-band set-up. Guitarist Ori Naftaly offered some authentic Tennessee-vibed slides and crystalline clean chords one minute, drifting into searing bends and classic rock soloing the next. It was a fitting bedrock for star of the show Tierinii Jackson, whose voice alternated between punchy, powerful highs and smooth seductive lows with style.

Another highlight was a breakneck tour through the Thirty Tigers label roster, including Jason Isbell and the 400 Unit coming together for a Zoom-enabled showcase of Overseas – Isbell rocking his 1960 Strat and a Magnatone amp, his sideman Sadler Vaden giving it guns on a J-200.

As you’d expect from an Americana festival, the plentiful ballads were offset by a goodly helping of rock and country, with bands from all over the globe bringing a huge palette of influences to bear. This was epitomised by the daily ‘Grassroots Hour’ showcases, which gave new talent a chance to show off their skills, while there was even an attempt to recapture some of the social aspects of a real festival. Each evening the ‘doors’ opened half an hour before the event, encouraging attendees to mingle in the online chat, while a daily virtual Zoom bar rounded off the evenings in suitable social fashion.

The show’s final day brought with it one of the most interesting and worthwhile ventures of the whole thing – the NHS songwriting workshop. This unique event paired Americana artists with frontline healthcare workers to work together to tell stories of the pandemic through music. The likes of Alex Ellis, Simon James, Sam Coe, Dean Owens, Hollie Rogers and Joey Clarkson teams up with GPs, pharmacists, mental health carers and other NHS heroes. The results were varied but suitably of the now – Coe’s ballad singing about vaccines with a “Needle in every arm” lyric, while Rogers turned the heat on politicians and anti-maskers with the song Mercy Me.

The climax of the festival was the AMA UK Award show, hosted by legendary DJ Bob Harris. Before the awards, we were treated to a tribute to the late great John Prine courtesy of Billy Bragg, Ferris & Sylvester and Ida Mae, while the man himself would be honoured with the new Songwriter Legacy Award, created in his honour. The awards itself featured further performances from Charlie Crockett, American Aquarium, Katie Pruitt and Jason Isbell, and AMA CEO Stevie Smith also stepped in to pay a heartfelt thanks to those keeping Americana going in these tough times.

Finally, the all-important International Lifetime Achievement Award went to the iconic Mavis Staples. Rounding off an enjoyable three days, a tribute to Gerry Marsden saw the AMA community pull together for a collective virtual performance of the You’ll Never Walk Alone – a spine-tingling way to bring a great three days to an end.

It might not be the same, but AmericanaFest UK demonstrated that it’s still possible to have some of that live music magic at home, and in these tough times, that’ll do.

You can relive all of the AmericanaFest UK performances on-demand until 11 February at www.americanafestuk.com.