“Honey, I shrunk the rack”: Costel Burlan of BecosFX on the magic behind his Stella compressor

We meet Costel Burlan, the Romanian pedal guru behind BecosFX to find out how he got into the pedal-building game, how he came up with the Stella and what makes his compressor so special. 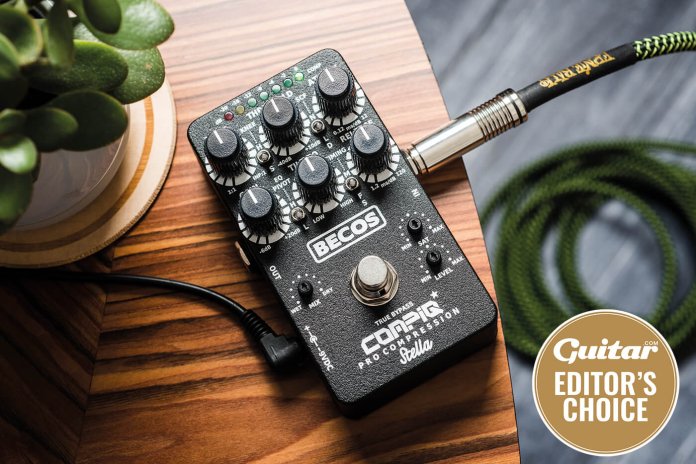 How did you first get into building pedals?

Since I was a child, I’ve been tinkering with electric circuits, doing things by hand and learning electronics as a hobby. It wasn’t until I was around 15 that I developed a passion for music and then I started to dive into the world of music gear.

It all came naturally, I think. Playing music and chasing the tone were related – and so six or seven years ago, I started designing my own things, out of necessity. The BecosFX product we debuted with was the Micro Booster onboard guitar preamp and soon after, I created my first pedal, the TS8-MS MIDI Overdrive/Switcher.

What made you want to create the Stella?

Most of the compression pedals on the market today are based on fairly simple (yet effective) circuits, but have too little control over the audio processing. The higher-class compressor pedals are either optical or FET-based circuits and they usually add colour to the sound which is not always desirable. Although they are sometimes preferred for exactly that…

I wanted to come up with something completely different in terms of control and using a Blackmer VCA as the active element was the only way to achieve that, while having the sound quality necessary to match a studio-like compressor.

Then I realised that I might have a competitive edge if I managed to pack more features in a smaller footprint, give full control over compression dynamics and make it as transparent-sounding as possible. Adding the tape saturation was the last-minute idea – a nice-to-have complementary feature, which gives the option of adding a sensitive colour-touch to the pristine, high-performance processing of the THAT Corp’s Analog Engine used in this pedal. I believe the CompIQ Stella has its own place in the higher-end class of compressor pedals.

The Stella packs a great deal of functionality into a small stompbox – what are the challenges in designing a circuit such as that?

It was really difficult to jam this many functions into a little enclosure, but that was the thing: I wanted to have a professional, rack-like compressor, packed into the smallest enclosure possible; and still have room for a nine-volt battery inside. I don’t think it can be shrunk any more than that!

I also wanted the audio path to pass through bigger audio-grade Wima and Kemet capacitors. A lot of tech requirements! The circuit is pretty hefty and the board could only be done in multi-layers – something uncommon in most pedals, which aim for simplicity instead. Finding the high-quality mechanical parts that are tiny enough to fit all in a regular pedal size was an even bigger challenge. Sourcing parts from multiple countries is rather inconvenient, but necessary for a complex product. However, that was not all.

Fabrication is a thing in itself and since the pedal is hand-built, it takes a lot of effort. It is the only way to be done, because big components have to be assembled into a specific order, some parts need to be trimmed and adjusted by hand and the final assembly is time-and-energy consuming. Without using SMD [service-mount device] technology, this would have been impossible to make.

What’s next for Becos?

In terms of product development, I have a road map for diversification. The MINI ONE which was just launched a couple of months ago, was the third in the CompIQ series of VCA-based compressors. A dual-band compressor is in the making and is planned to be released by the end of this year.

Two other pedals are in the final design stage, one of which is a full-analogue tape-saturation effect. As for the other, I think it will be a nice surprise for many, so I won’t disclose what it is, yet. In terms of business, I need to make the products be more visible and put them on music shop’s shelves!

Read our review of the Becos CompIQ Pro Stella Compressor here.
Find out more about BecosFX at becosfx.com