“There’s a lot of nice nostalgia there”: Brian May celebrates 50 years of Queen by taking us through his personal photo album… in 3D!

The Queen guitarist has been taking photos with a stereoscopic 3D camera for decades, here he takes us through some choice moments he’s captured to celebrate the band’s Golden Jubilee…

This year marks the 50th Anniversary of Queen as a proper band – when Freddie Mercury, Roger Taylor and Brian May were joined by John Deacon, cementing the line-up that would become one of the biggest rock bands of all time.

Throughout the band’s long lifespan, guitarist Brian May has been taking photos with his stereoscopic 3D camera, preserving intimate on and off-stage moments in a truly unique fashion, presented in the book, Queen In 3-D by Brian May.

For the band’s 50th Anniversary, Brian May has not only kindly shared some of these rare photos with Guitar.com, but has also provided exclusive commentary on the memories and circumstances of each one. Let’s hand it over to Brian… 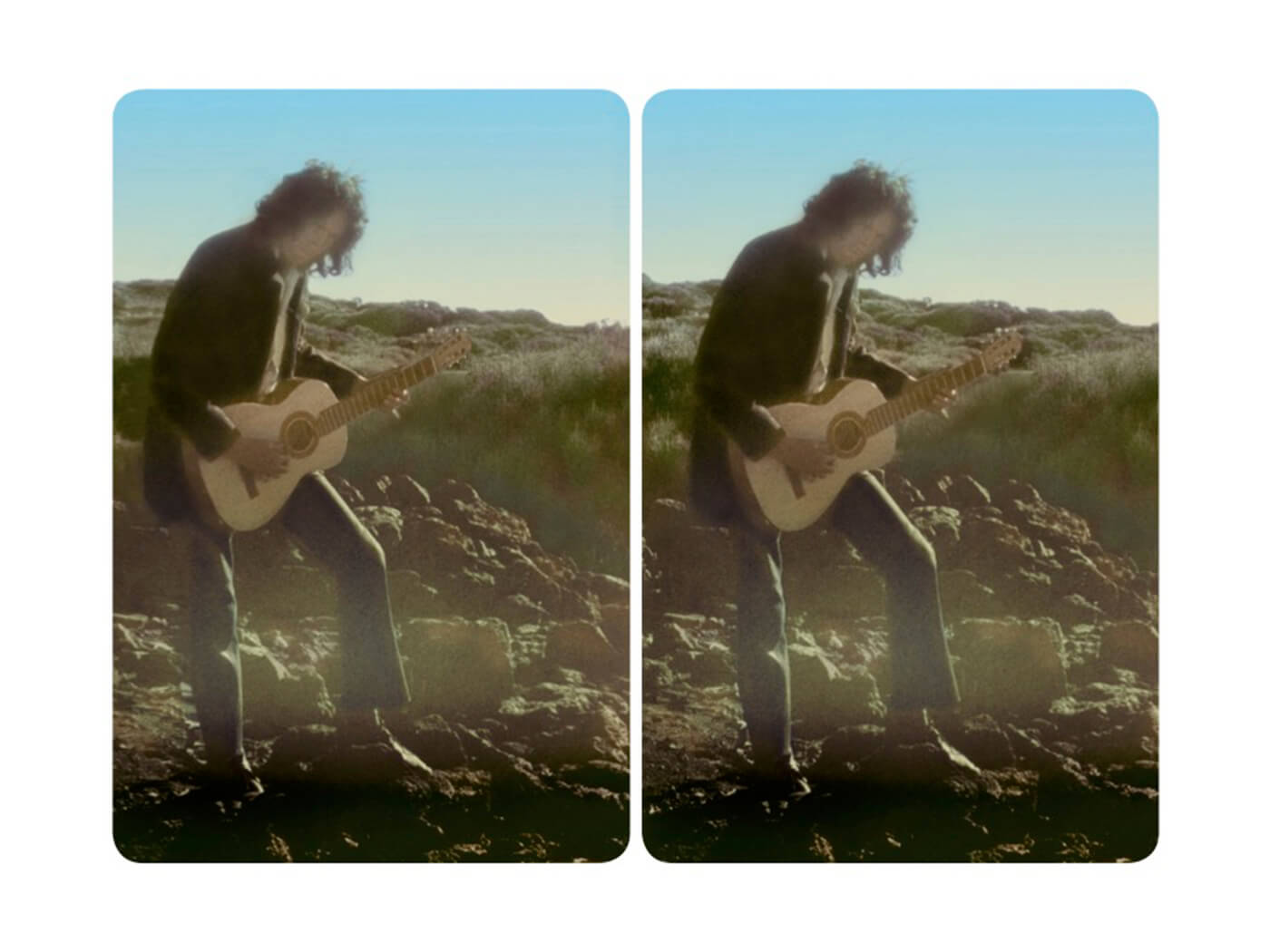 “Twixt science and art! Here I am at the fledgeling Observatorio del Teide in Tenerife on an observing trip for my PhD – but in leisure time strumming as the sun sets in a sea of clouds. This was the birth of the Tie Your Mother Down riff.” 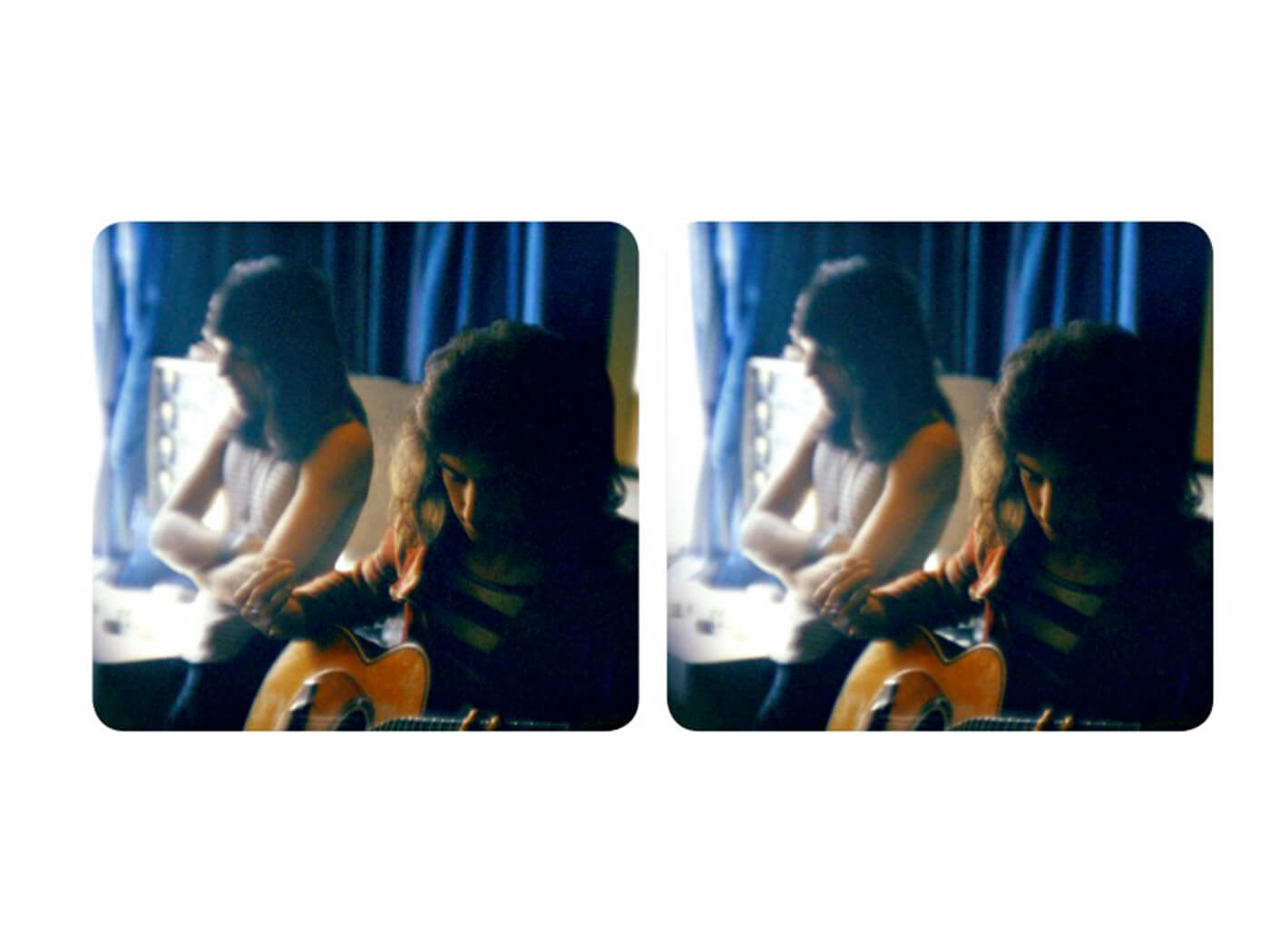 “A rare photo taken during the making of our first Queen album. Freddie and John are leaning against the back wall of the small mixing room at Trident Studios, St Anne’s Court in Soho, London. John is playing my ‘Dilloway’ acoustic guitar, the one with the buzzy sound that I used on The Night Comes Down on that first album, and many years later on Jealousy. That’s a Studer multi-track analogue tape recorder behind Freddie. You don’t see many of those these days.” 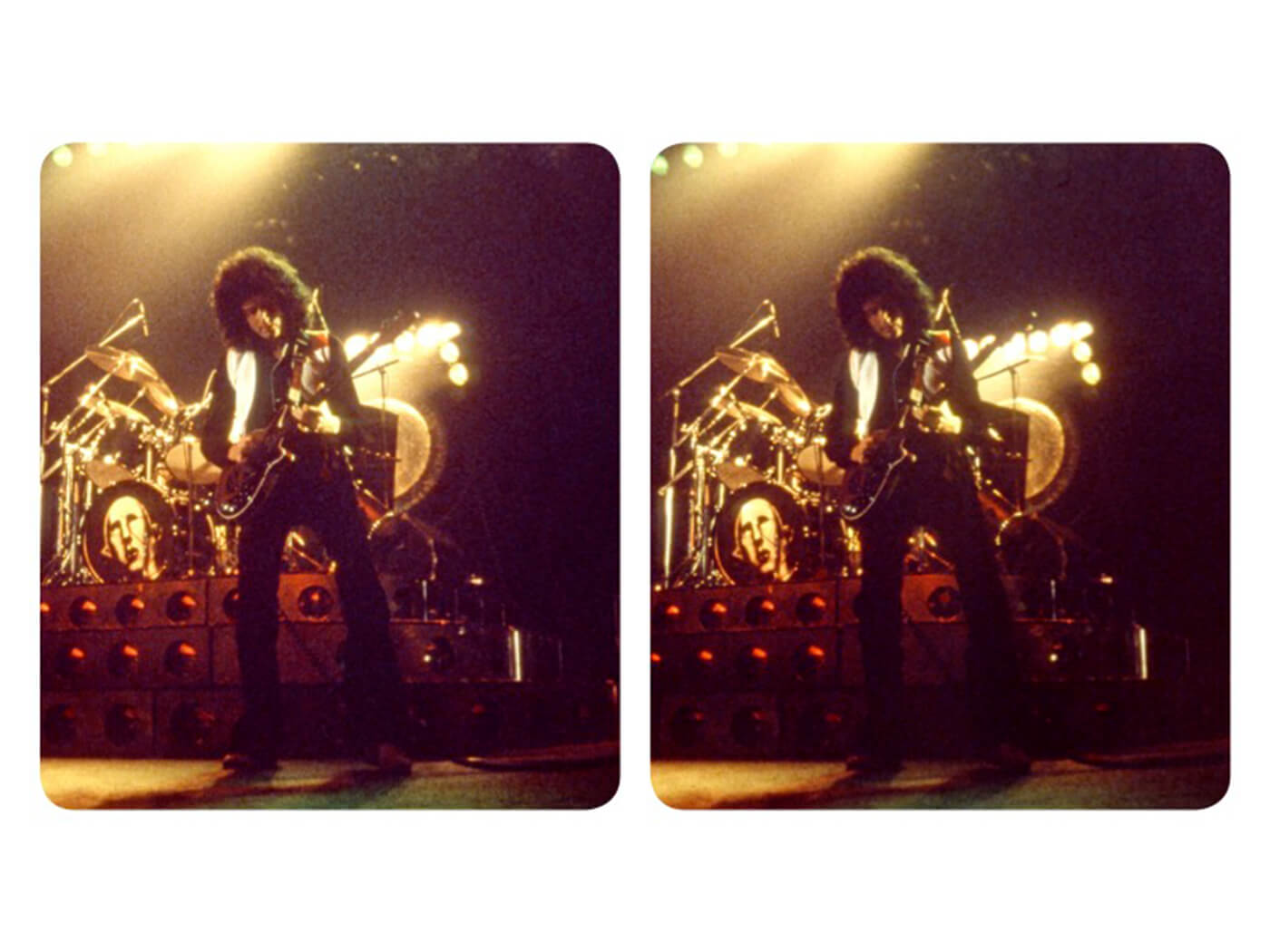 “This picture is from the Jazz tour of the USA in 1978. Note the News Of The World robot face on Roger’s bass drum, never used in Europe.” 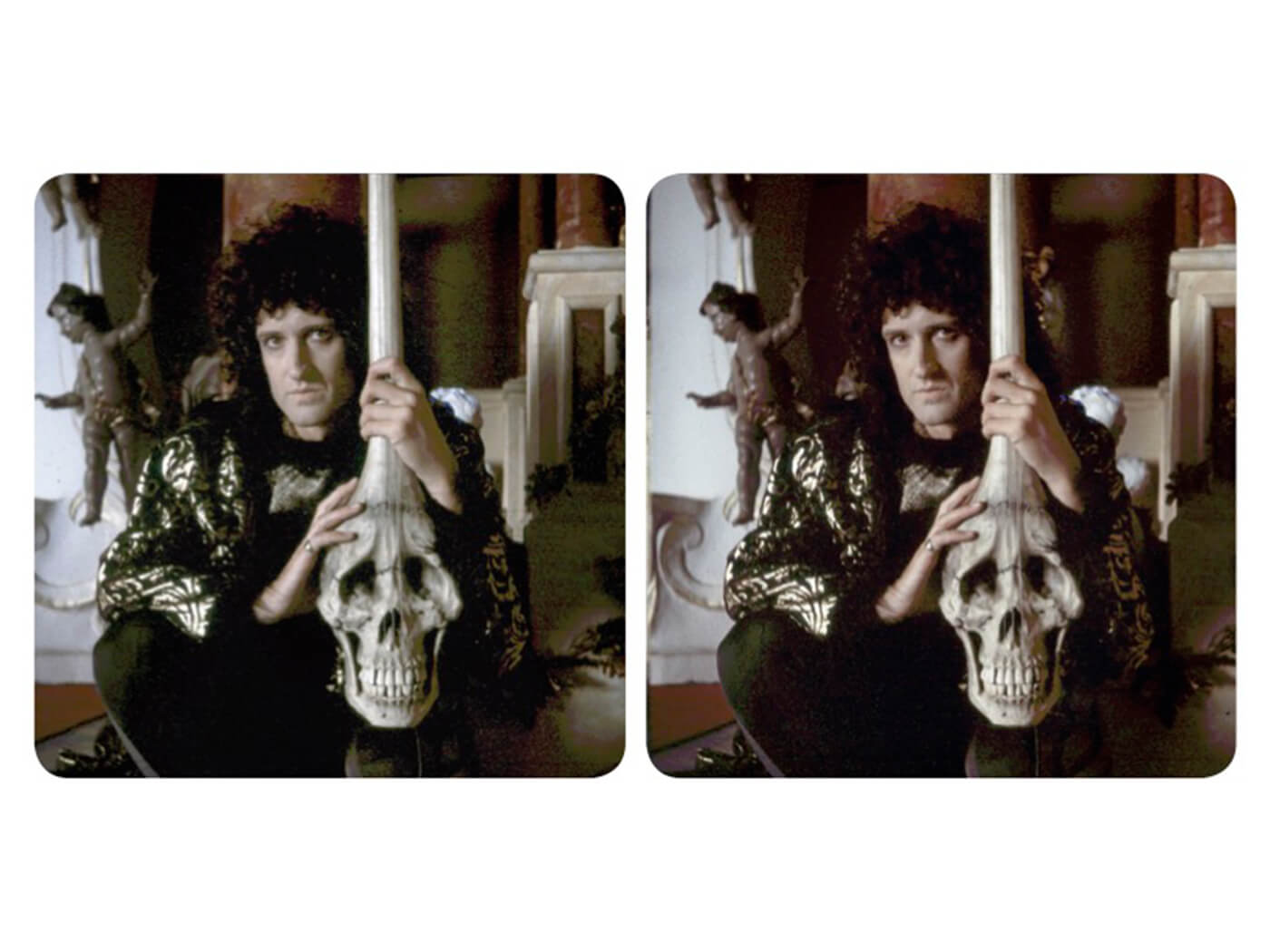 “Bri in a strong supporting role! So I remember the genesis of the song [It’s A Hard Life, this was taken during the shooting of the video – Ed] as a precious moment in the studio, and I do think the track has a wonderful, transparent yet warm sound, and some of Freddie’s most genuinely emotive singing. This wasn’t just a song plucked out of the air for the sake of writing; this was something that gave voice to Freddie’s intense emotional pain at the time. I certainly related to it because I was going through something very similar, and I think the whole band – each one of the four of us – related in some way to what the song was about.

Now having said this, here we appear to be making a video that has nothing to do with any profound inner meaning of the song! In our band, it was traditional that the writer of the song had the choice of how the video for it was put together, and in this case it was Freddie who was the writer. So he developed this idea with a director called Tim Pope, famous for his song I Want To Be A Tree. The two of them came up with this idea that was a kind of extravagant, opulent scene of debauchery through which Freddie wanders, singing It’s a Hard Life. 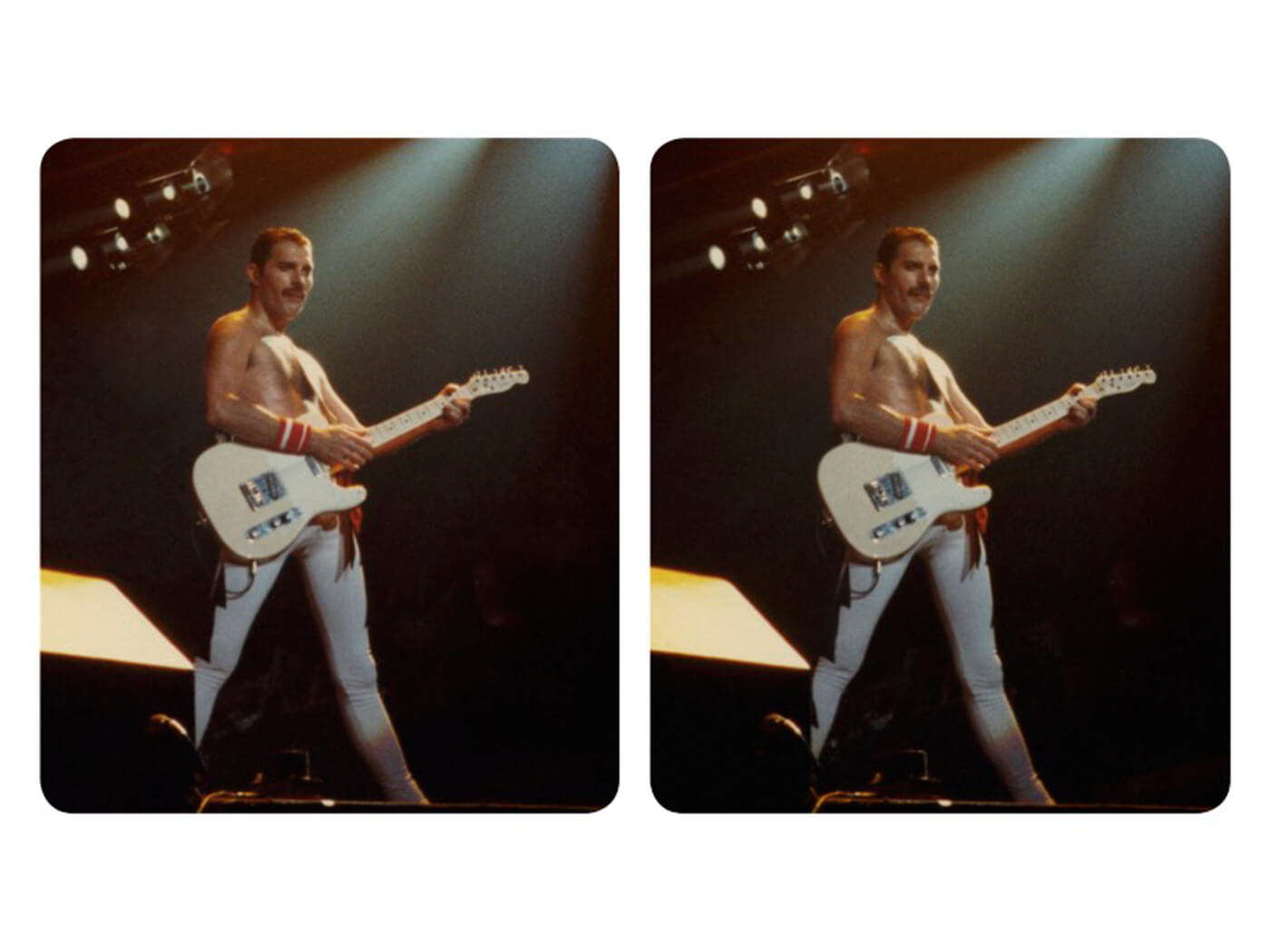 “Freddie in action at his peak, giving it the works [in support of 1984’s The Works – Ed]. Ah! That guitar. It’s a creamy white Fender Telecaster. Freddie wasn’t often pictured playing guitar on stage. Well, here he is, strutting his stuff, with guitar slung on hips, a little in the Elvis style, and, since it’s hard to make an acoustic guitar work with a loud band in a live situation (that’s still not easy, even these days) Freddie chose the Tele. Probably the look of it had something to do with it, too.

“That guitar disappeared from a storeroom in London 30 years ago, and has never been seen since. Not by us, anyway. Somebody has it squirrelled away, I guess, a piece of easily identifiable stolen property. Maybe someone with a decent conscience will return it someday. I still have its sister, a black Telecaster of the same vintage.” 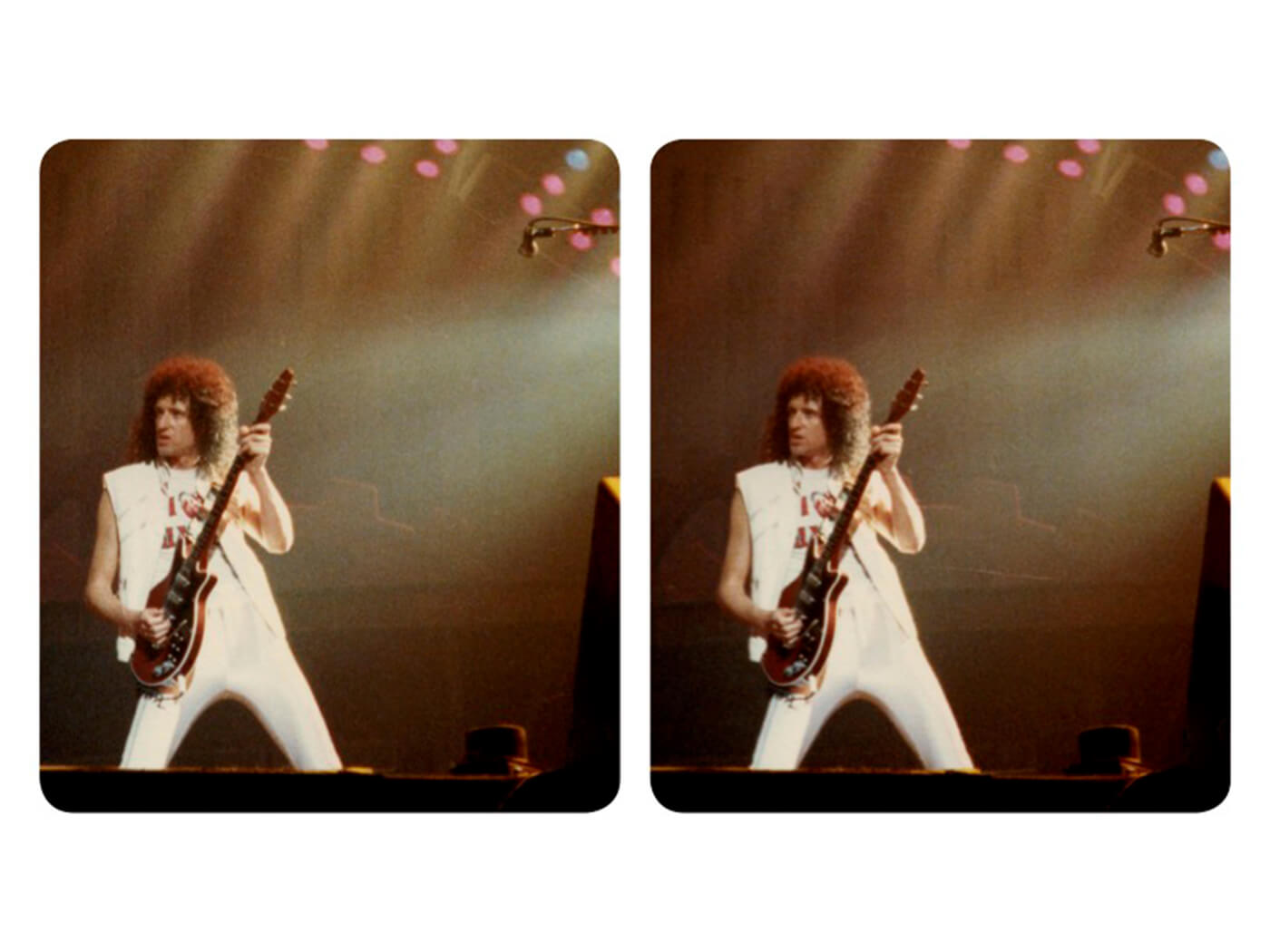 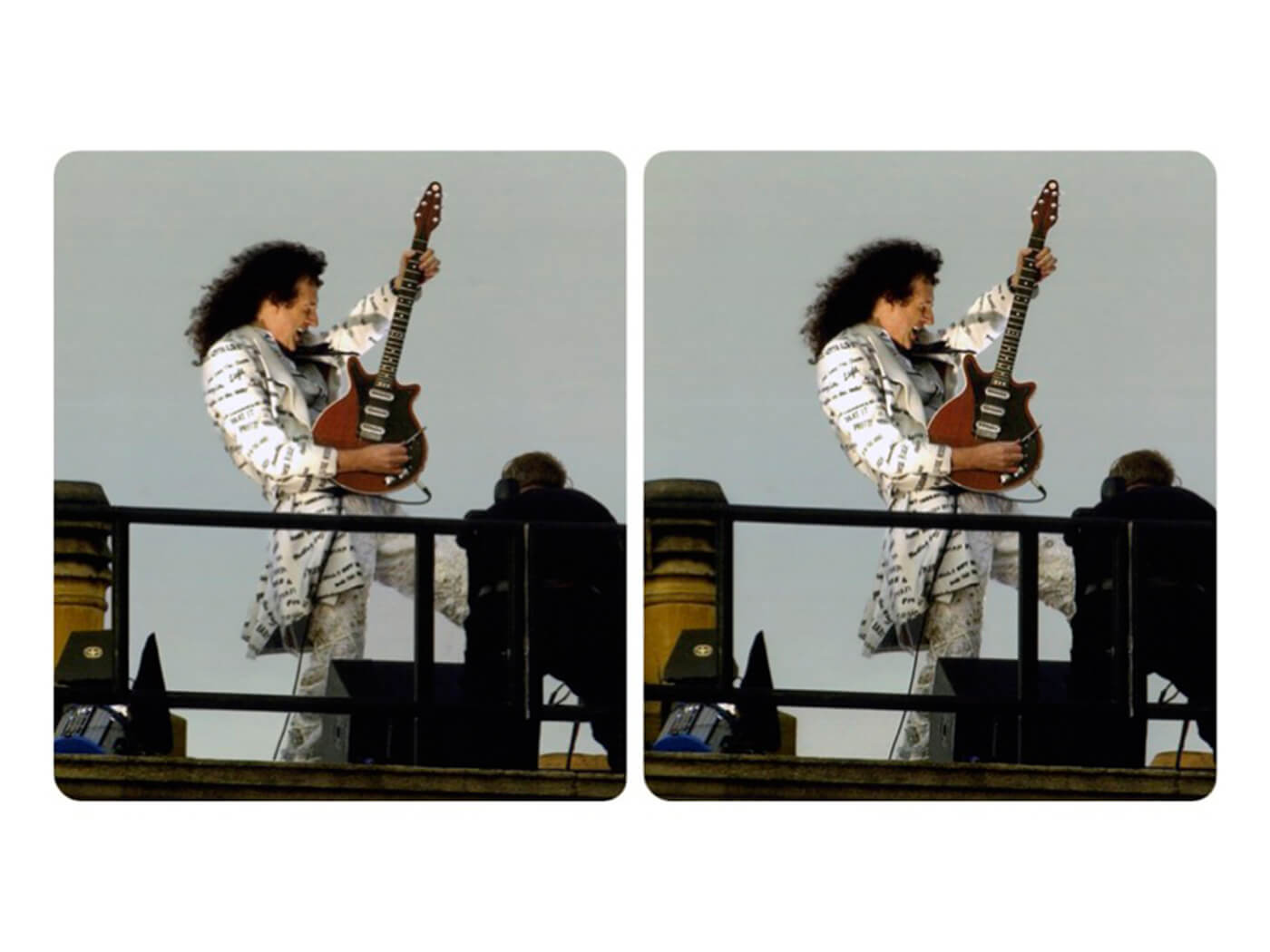 “For one night only the entire cast of We Will Rock You appeared at the Queen’s Golden Jubilee concert, and I had a life-changing moment on the roof of Buckingham Palace…” 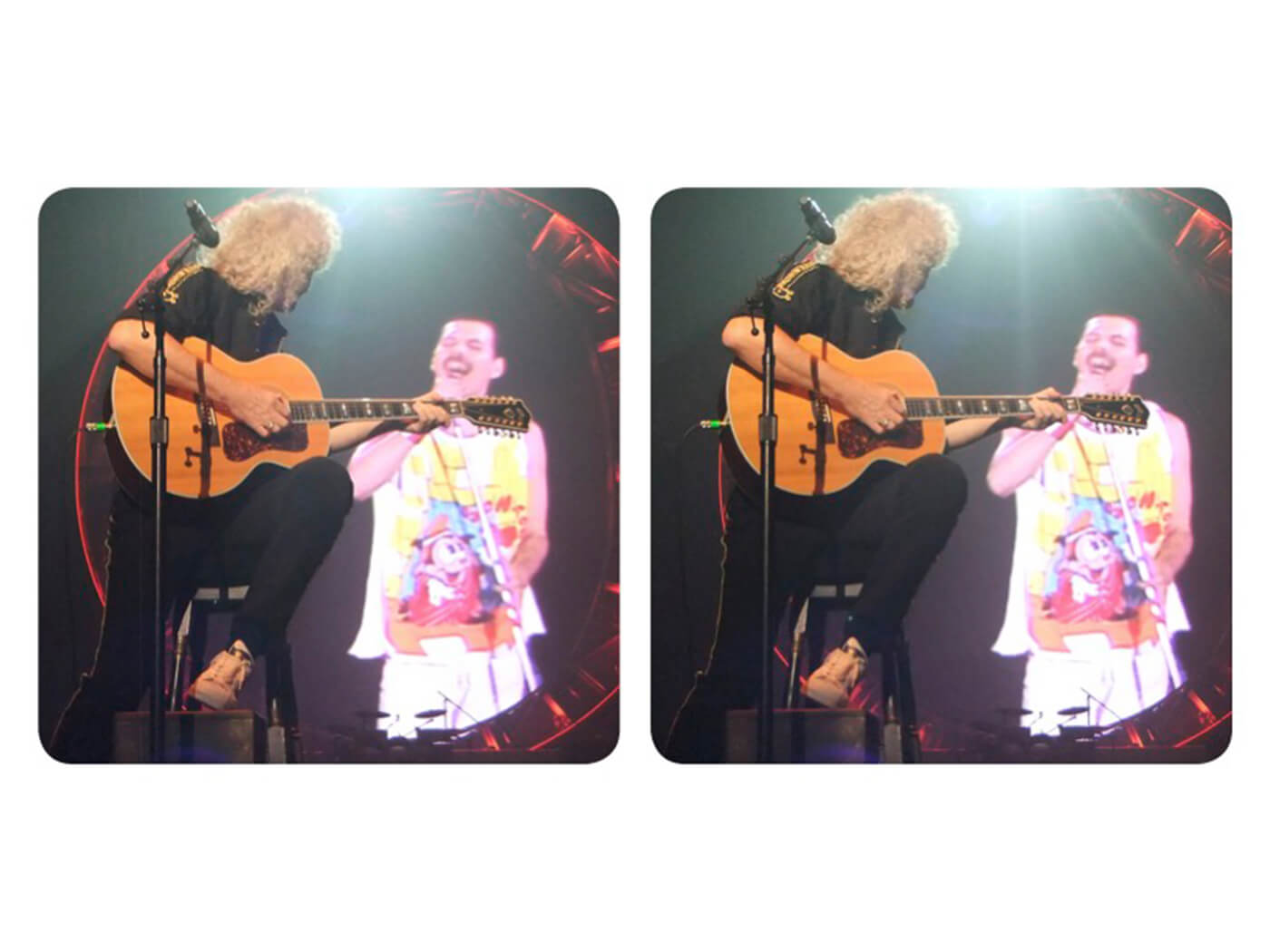 “There’s a lot of nice nostalgia there. It would be completely inappropriate if nostalgia dominated the whole show, but for that moment it works really nicely. We have a little set piece where Freddie appears and sings the last stanza of Love Of My Life, when I’m at the front alone with my acoustic guitar. That’s a great feeling for me to be able to hand over to Freddie; for those few seconds, he is tangibly in the room – he is part of the show, as he should be.”

The latest edition of Queen in 3-D, capturing the legacy of the band through Brian May’s stereoscopic photography and narrative is available from The London Stereoscopic Company for £30, to find out more, visit their website.