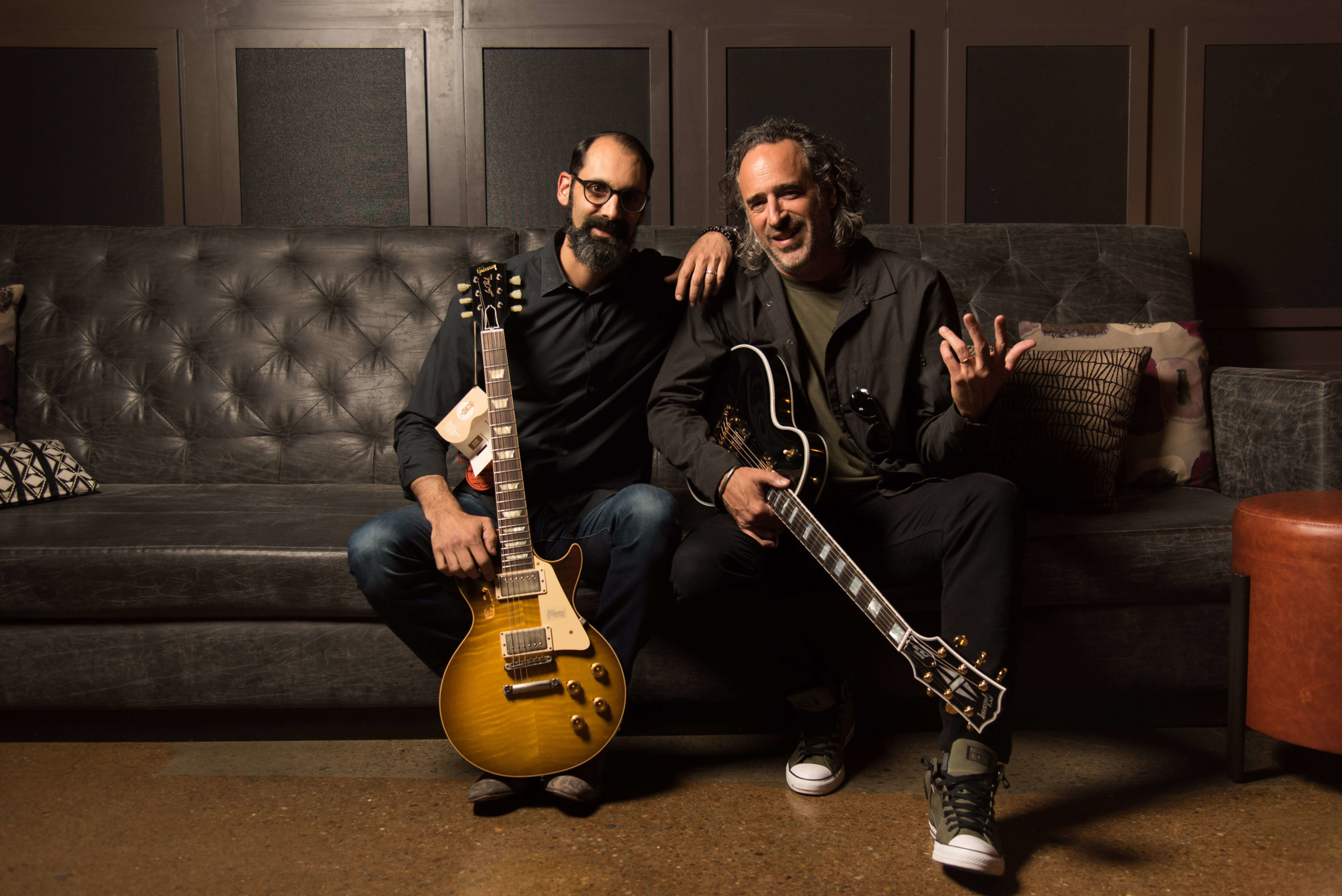 Gibson CMO Cesar Gueikian and CEO JC Curleigh at the Nashville preview event for the company’s 2019 electrics. All images: Mitch Conrad for Gibson

Gibson has been listening. That was the key takeaway from the company’s launch event at the Analog in Nashville’s Hutton Hotel on 23 April at which its rebooted 2019 electric line – teased at NAMM and officially released today – was revealed to a select audience of media and industry personnel.

CEO JC Curleigh and Chief Merchant Officer Cesar Gueikian were on hand to talk through the rationale behind Gibson’s new-for-2019 Original, Modern and Custom Shop Collections. For many long-standing fans of the brand, the highlights will likely be found in the Original Collection, where a back-to-vintage approach sees PCB-mounted controls, Richlite fingerboards, weight relief and robot tuners consigned to the scrapheap in favour of fan-pleasing features such as old-school hand-wired harnesses and thinner fingerboard binding. And best of all, the majority of the new models are cheaper than their predecessors.

We asked JC Curleigh whether, following all the positive press that followed Gibson’s appearance at NAMM, this feels like crunch time. “You’d call it crunch time, I’d call it the moment of truth, but backed with energy and validation that we’re moving in the right direction,” said the former Levi’s chief.

“NAMM was a little bit of a high-risk event for us. We’d just emerged out of that obstacle course on 1 November – we were only going to NAMM if we could show up with truly compelling, relevant guitars that would prove to people that we’d listened. From artists, right through to dealers and Gibson fans that said, ‘Why can’t you just go back to some original specs and do what made you famous?’

“We literally worked overtime, and the team did, to show up at NAMM. It wasn’t just, ‘Oh, Gibson’s back at NAMM.’ When they saw what we brought there, they were like, ‘Wow, they listened.’ But the question right after NAMM, which was I think a genuine question – it wasn’t an insult, it was more of an instigating action – was, ‘Okay JC, a lot of people can show up at NAMM with prototype guitars but they often don’t make them all, they often make them much later than you say, and by the way the pricing goes right up.’”

Gibson’s response was rapid, with Curleigh painting a picture of a company with a renewed sense of agility and enthusiasm: “So we came back on the Monday and said, we’re flipping production, we’re making every single guitar, we’re gonna deliver them early and we’re gonna optimise our pricing to the features and benefits that make sense for people. I’m super proud right now that we’re launching two months early – we told people June – we’re making every single guitar we showed and the pricing is at the right level.

“So it’s the moment of truth but I think it’s backed with the confidence that the industry has given us a massive check mark on listening, pivoting and bringing real solutions to both original needs and modern needs.”

Prior to our conversation with JC, Gibson CMO Cesar Gueikian walked us through the Original Collection. “This is where we look back and pay tribute to our iconic past and bring those classic models back,” Cesar explained. “It’s our way of celebrating our past, our legacy and our heritage. None of these guitars are chambered, they are all solid, just like we did them back in the 50s.”

We notice a few nods to the nerds, such as skinnier fingerboard binding on the Les Paul Standard ’50s and ’60s. “We went for thinner binding generally in everything we’re doing in the Original Collection, including the SGs,” reveals the CMO. “It’s closer to what the classic models were, it’s more authentic, it’s what we did back then. There was no science to what we were doing in the 50s, you see variations on original models – the thin binding is definitely more consistent in terms of what we did in the late 50s, and so we’ve gone there.”

Specification changes aren’t just aesthetic: “Everything we’re doing in the Original Collection is hand-wired with Orange Drop capacitors. We particularly focused on the audio taper, to not bring output down when it cleans up the sound.”

With weight relief off the table for the Original Collection instruments, we wonder if sourcing lightweight mahogany for the range has been a challenge. Cesar says no: “We have a long-term, steady source of mahogany. A couple of years ago we did a deal with the government of Fiji, so we’re in a really good position today as we have several years of what I would consider to be lightweight mahogany.”

Reimagining its electric guitars for 2019 also involved some changes at the factory: “This is what we make, but we paid a lot of attention to how we make it,” says Cesar, pointing at one of the new Les Pauls. “Investing a lot of capital in our factories, rearranging flow – it’s going towards modern-day manufacturing practices that at the same time celebrate craftsmanship and the hand-made element, because that’s who we are, that’s in our DNA. Our people in our factories are artists, that’s how I think about them.”

A $2,499/£1,999 Les Paul Standard (down from $3,399/£2,799 for the 2019 Les Paul Standard that was introduced back in September 2018) with a much more classic appearance and feature set is something which should make Gibson’s competitors feel very nervous indeed. Watch this space for reviews soon.

Find out more about the new Gibson Original and Modern Collections.