Although it has been open only since June 2013, Carter Vintage Guitars in Nashville has quickly become an essential port of call for guitarists passing through Music City. 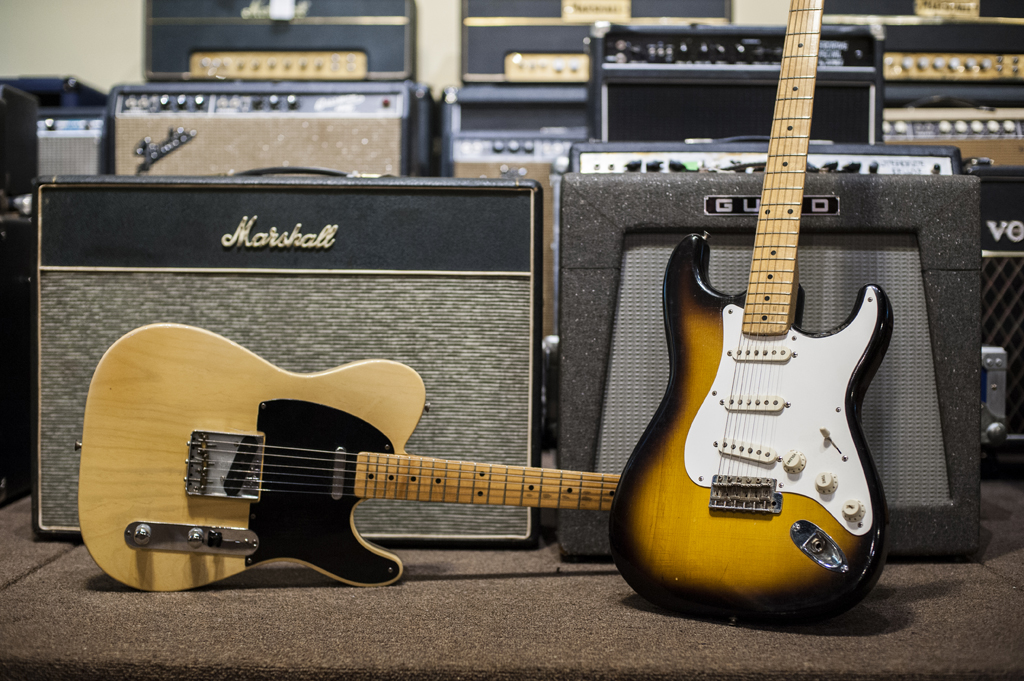 Just under a mile’s stumble south from the likeable tourist trap bars on Broadway and a mere two minutes around the corner from Jack White’s Third Man Records stands Carter Vintage. The store’s 8th Avenue location marks the western boundary of a triangular slice of neighbourhood recently rebranded as Pie Town by its artsier inhabitants in an effort to shake off a somewhat unsavoury reputation. Huge exterior murals of Maybelle Carter and a sunburst Les Paul mean that you can’t miss it, and there’s much to savour when you grasp one half of the bisected Gibson SG body that functions as a pair of door handles and step into nearly 8,000 square feet of fretted instrument heaven.

Proprietors Christie and Walter Carter certainly know a thing or two about vintage guitars, mandolins and banjos. Christie worked at Gruhn Guitars for 25 years as both store manager and salesperson par excellence, while Walter’s career has included stints as a country songwriter and Gibson’s in-house historian and archivist. He also co-authored the indispensible reference title, Gruhn’s Guide To Vintage Guitars. Christie and Walter went out on their own in late 2012 and worked from their home for a short time before buying 625 8th Avenue South and renovating it in a contemporary urban style before opening their doors to the public in June 2013.

“We started with 75 instruments spread out over all of the walls and virtually nothing sitting on the floor,” remembers Walter. “Now it looks almost like hoarders live here! We’ve got over 1,300 instruments. We started out with just us and one other employee and now we have 17, full- and part-time. We expected some growth but it’s really taken us by surprise how quickly we’ve been accepted.” 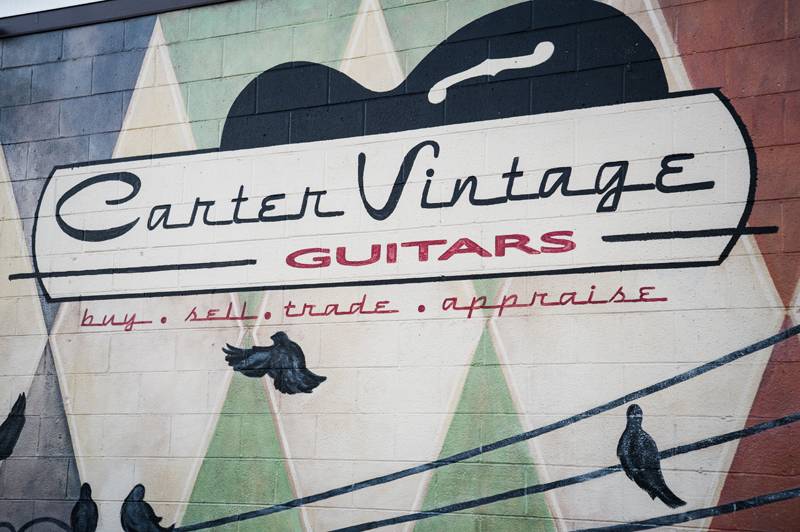 Because it’s Nashville, some of that acceptance has come from celebrity clients, as evidenced by a pair of Dumble amplifiers owned by Keith Urban and a whole collection of Steve Earle’s instruments currently available in store.

“Some we knew, some heard about us,” says Walter of the Carters’ famous customers. “Carlos Santana was driving by and saw Maybelle Carter on the outside wall. Other people have come from the other direction, seen a giant Gibson Les Paul and thought, ‘That must be a guitar store!’ But we knew people from previous dealings and others just heard about us.

“And we’re fairly close to Downtown. If you’re playing here in any of the Downtown venues it’s an easy jump to take a break from soundcheck; we’re the closest store now to Downtown. There used to be several stores Downtown but not anymore. We’re probably a mile walk from all the honky-tonks, which gives the drunks a chance to walk it off by the time they get here. Most Americans won’t walk it, they’ll take a cab. Europeans and Australians will walk it!”

When asked how they deal with the temptation of being surrounded by hundreds of beautiful vintage guitars and whether there have been instruments that they have found impossible to let go, Walter laughs and points the finger at his other half: “She has an office full of instruments like that!”

“I grab a few things here and there,” Christie admits. “Some neat stuff. I’ve picked up a few old, rare amps. A couple of Grammers [vintage Nashville-made acoustics manufactured in small numbers in the second half of the 1960s – Ed] came through recently that I really like, some tenors… I tend to hang on to stuff and he’ll just sell ’em!”

On the subject of high dollars, we wonder how the Carters feel about the state of the vintage guitar market and whether they think that its recovery from the global economic crisis of 2008 is now complete. “It was really 2009 that was the horrible year for vintage instruments,” says Walter. “Then it hit a bottom, finally, and I think it’s risen some since. It’s not back to the crazy prices of 2007 and 2008, but everything seems to have recovered now.

“Whenever that happens, the better pieces prove to be the stronger performers. The ES-335 is the strong model of that group. To some degree, the ES-345 and ES-355 tag along with it. When times are good, people pay crazy money for the ES-345 and ES-355 also. When times are tough, they want only the 335s. In the Les Paul family, the 1958-60 sunbursts remain stronger – maybe they didn’t get hurt as much as prices for Customs, Specials and Juniors. Most things have come back.”

Ironically, one of the only areas in which Walter feels the market is a little flat is the demand for archtop instruments, because “they never really recovered from the boom that they experienced in the late 1990s, when there were two collectors that were buying against each other and pushing prices up. One of them died and one of them almost went to jail and had his collection liquidated. The market fell some when they were removed, then it fell with everything else and has never recovered. There’s not as great a demand, it seems, for archtops.”

Perhaps surprisingly, Walter also cites National resonators and 1930s Dobros as another segment of the market that is no longer buoyant: “In the case of Dobros, they used to be coveted but most people want a more modern design. And as for the steel-bodied Nationals, it’s partly that the new National company makes guitars that intonate a little better, and just in general that market is about the same as it was in the mid-nineties.

“Everything else seems to have rebounded. The market is not soaring again the way it was. Things are strong. After having lost money, people want to make sure they’re investing more wisely and that their investment is a solid investment and not a speculative one.”

We wonder if the current climate makes it a good time for those who are looking to acquire a player’s guitar rather than invest in a collector’s piece to dip their toe into the vintage market. “It’s hard to make a blanket statement,” says Walter when we ask if there are any bargains out there. “Maybe a later version of something, if you’ve played it and it’s good. Not all of the seventies Les Pauls are bad.

“If you really want a bargain, find something with a broken neck. The price should be as low as half of what it normally would be. If the neck’s been repaired properly it’s stronger than it ever was.

“If you’re just looking for something to play, that’s where the bargain is. Or repaired cracks, especially in acoustics. The refret doesn’t hurt the value as much as it used to; you’ve gotta refret it if you’re gonna play it. Look for something with issues that doesn’t affect the playability. You can get it for even less than half price if somebody has really messed up the finish on it!”

Finally, given Carter Vintage’s close proximity to Jack White’s Third Man Records store and recording studio, we have to ask about the resurgence in catalogue brands such as Airline and Harmony in recent years, thanks in no small part to the likes of White and Dan Auerbach getting edgy garage blues fuzztones from old electrics that once might have been found in a pawnshop rather than a vintage guitar boutique.

“There’s certainly a market,” says Walter. “The cool, kitschy factor from the fifties and sixties makes a $300 guitar a $1,200 guitar if it looks neat. They still have to play, and sometimes that’s a challenge because the neck is probably loose or, worse, not fixable. And the more gaudy and the more switches and knobs, the better it is!”