Owning a vintage Gibson – let alone a collection of them – may seem like an impossibility. Yet Rob Sampson disagrees, because he’s actually done it. 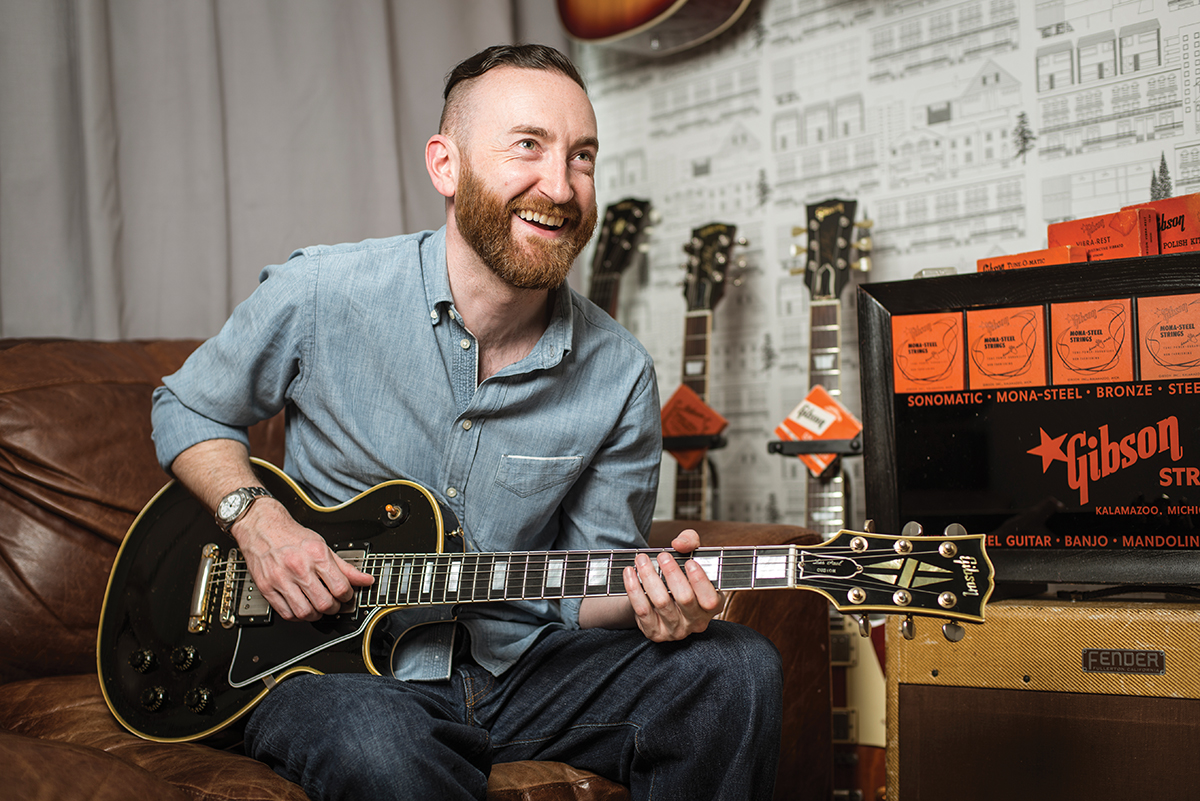 Rob Sampson’s collection is as impressive as they come – but refreshingly, his approach is quite different from that of most collectors. He’s unafraid of refinishes, headstock breaks, missing parts and modifications. By and large, he avoids top dollar items, instead focusing on less-coveted models and picking up 50s and 60s guitars for less than the cost of current production reissues.

But why did he choose to focus on Gibson? “The beauty of the Gibson brand, from a collecting point of view, is that there are far more midrange models that are affordable,” he explains.

“With Fenders, there are fewer models, and Strats and Teles from the 50s and 60s are an awful lot of money. I realised I’d never own a 50s Les Paul Standard, so I got into ES-330s instead. I went through several of those until I got a ’62 ES-335. It was a refin with a headstock break, but it was ridiculously cool, and I got an early-60s ES-335 for £2,000! Later, I got a ’66 ES-345 that was also cheap, because the ’board had been replaced. As a result, I slowly realised that player-grade stuff with repairs and some changes can be relatively affordable. If there are hardware issues, you can just find replacements online and put things back to original.”

Chasing down vintage parts and guitar-related ephemera has added to Rob’s enjoyment, so how does he do it? “Basically, I just scour the internet”, he admits. “Etsy has lots of interesting stuff on it, which you would never think; eBay of course, but I haven’t figured out yet whether Reverb is a really good or bad thing for me! My Reverb Watch List is ridiculous: tuners, pickups, hardware and even stuff like original keys for Lifton cases.”
Rob’s love of rock music began when a schoolmate brought a cassette tape of Appetite For Destruction to class. Pictures of Slash and various other rockstars of the era often featured Les Pauls and, when Rob decided to learn guitar, that’s the model he wanted to play. 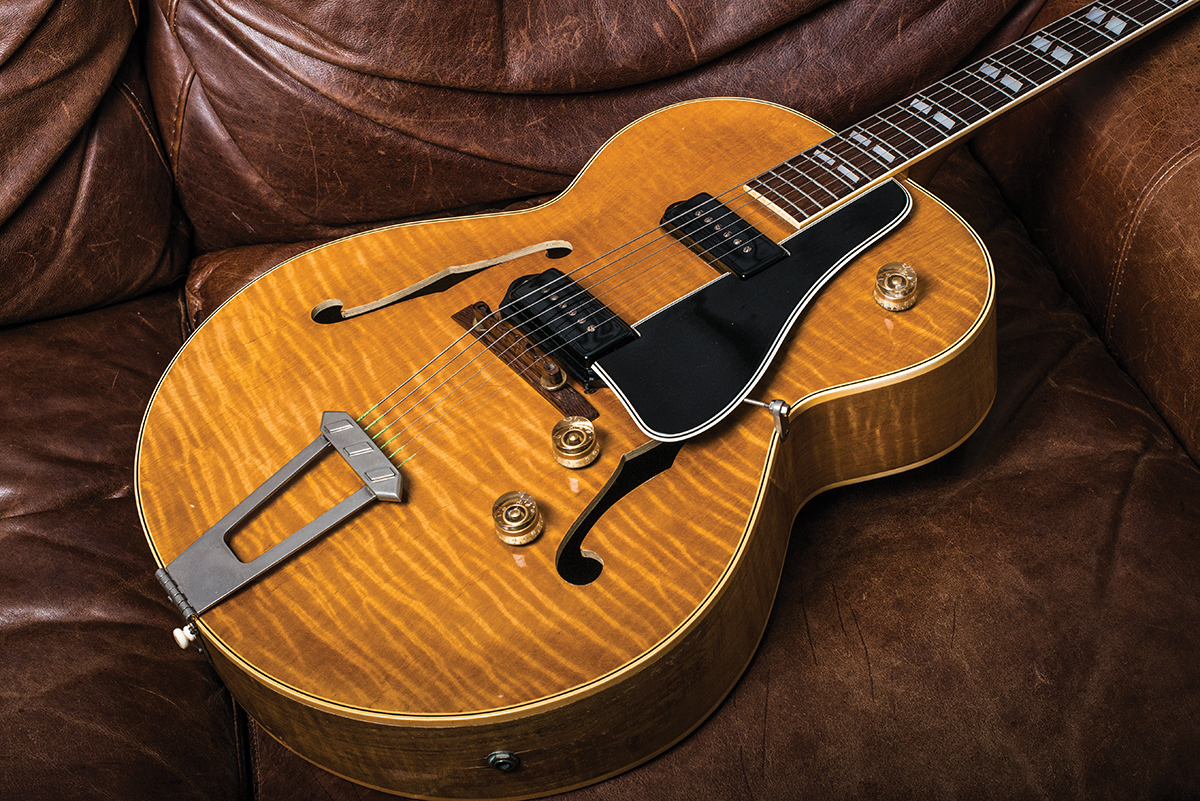 A succession of copies followed, before Rob started buying vintage Japanese guitars because they were that bit closer to the vintage Les Pauls he saw in guitar books. But his tastes were broadening, too. “I went to art school in Lancaster and there was a shop called Hobbs Music,” he recalls. “The guy had modern Gibsons, but in the back of the shop, there were a load of jazz guitars up on the wall. There were L-5s, L-7s, really top-of-the-line stuff, and none of them were for sale. Even though I don’t play jazz, I fell in love with those because they are so beautiful and the craftsmanship is incredible.” 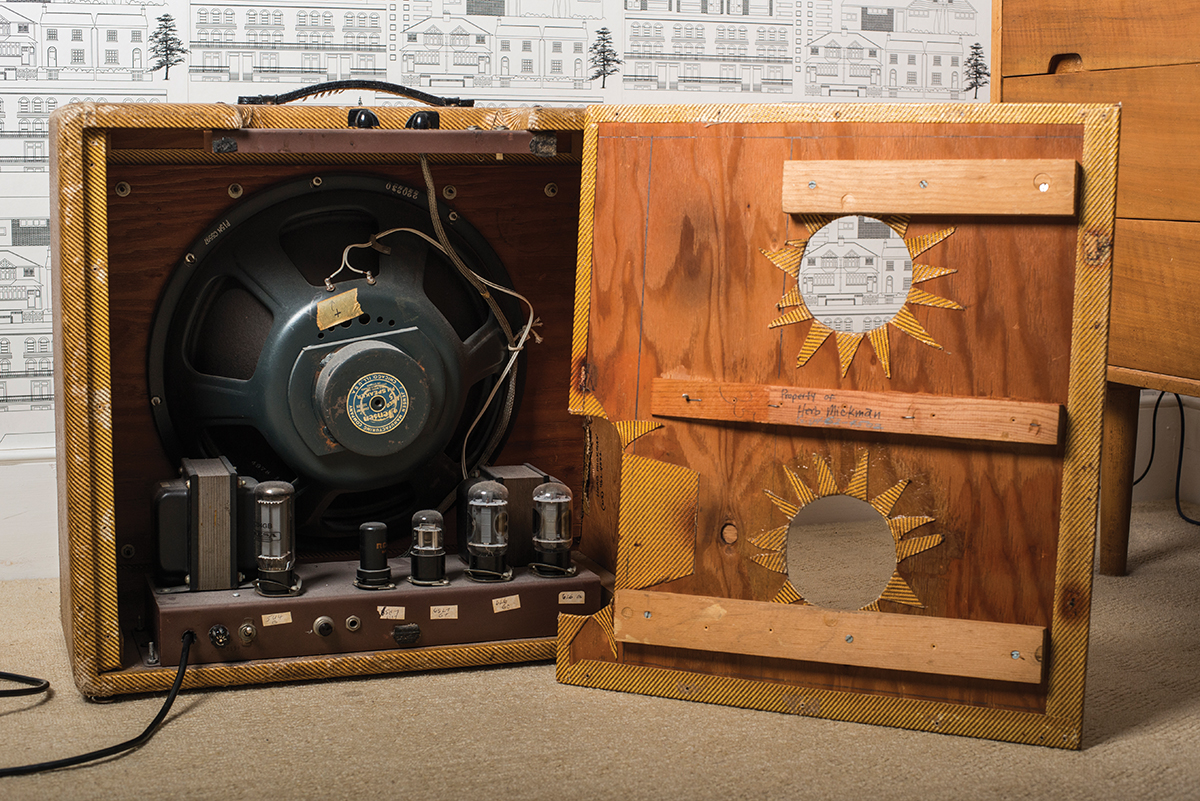 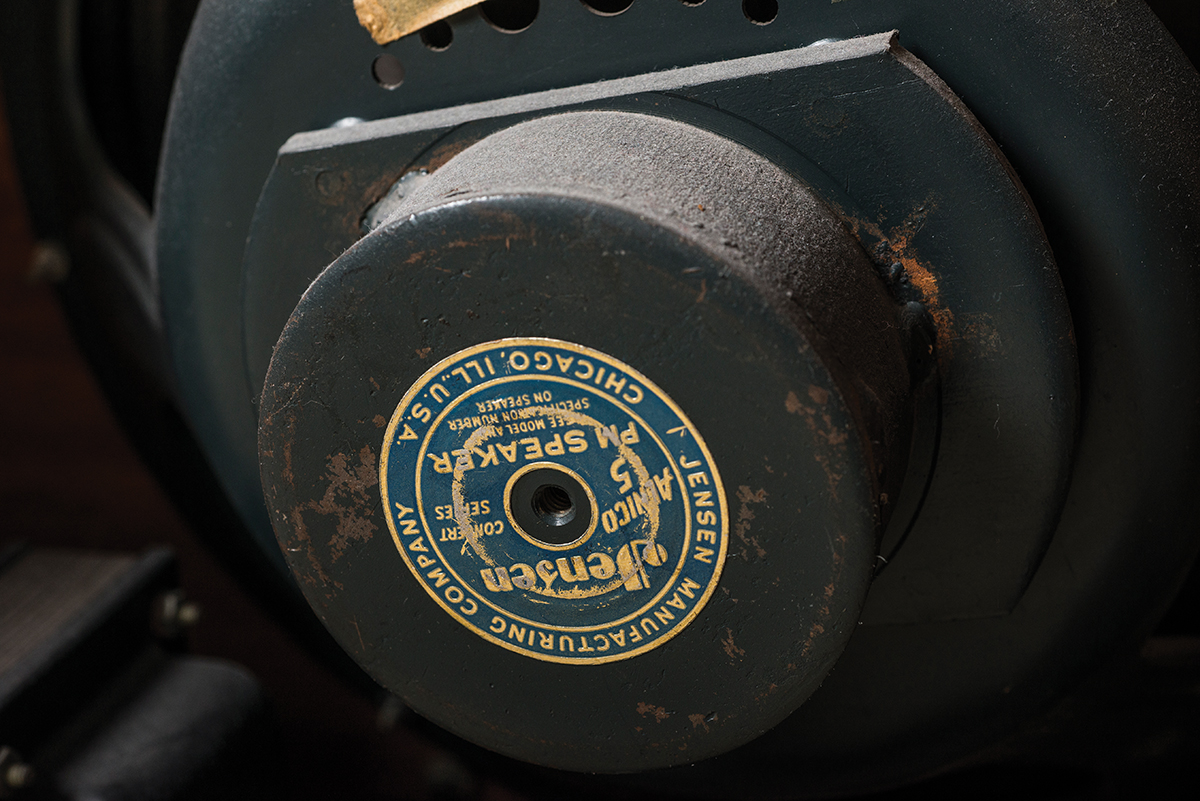 Rob’s first vintage Gibson was acquired soon he graduated and moved to London. “I’d saved up about £1,500, so I managed to pay six weeks’ rent in advance. My dad drove me down on the Sunday, and on the Monday, I went to Denmark Street and spent £500 on a ’62 Melody Maker. It had been Grovered, so it was £150 cheaper, but I had no job and I’d just blown half of my remaining money. I still do that sort of thing. If there’s a guitar that I can’t let get away, but I haven’t really got the money, I’ll buy it anyway and then figure something out.”

The Melody Maker is long gone, but Rob managed to replace it with some fantastic solidbody Gibsons, including a TV Model.

“I’ve had it for about four years. It came from Angel Music. Somebody in the past moved one of the studs, presumably to improve intonation, and it has a DMC repro tailpiece. It’s had a headstock break, too, and the new frets are too big, so I might get it refretted.” We ask if the ’board will get refurbished in the process, but Rob has strong views about that. “I’m quite particular about fingerboards, because I think that’s where a lot of the feeling and soul of a vintage guitar comes from. That played-in waxiness you get from Brazilian rosewood.” 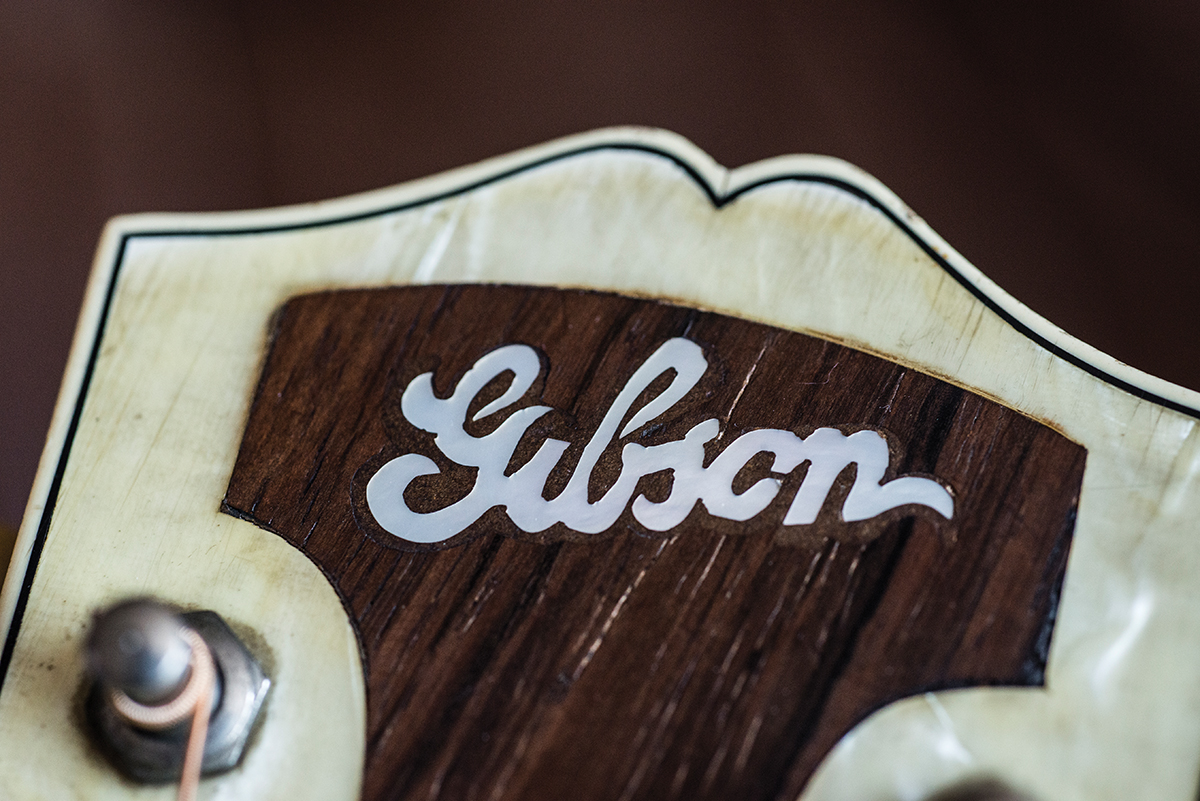 Despite putting his 1950s Les Paul dream on hold, Rob stumbled upon a Les Paul Custom. “I’ve known Steve from Lucky Fret Music for a while, so I popped in for a chat and saw it downstairs,” Rob recalls. “You can’t miss a chance to play a 1950s Les Paul, so Steve took it off the wall, plugged it into a Tweed Deluxe and after playing one chord, I said: ‘I don’t care what it takes, I’ve got to have this’. I ended up trading a few guitars for it, but hey, I have a real 1950s Les Paul and I never thought I’d own one. I’m not entirely sure of the year, because the back of the neck was refinished, but I think it’s a ’55 or ’56.”

The Les Paul Custom’s original staple and P-90 pickups had been changed to a short-spaced, long-magnet PAF in the neck position and a PAF-spec Patent Number humbucker in the bridge. The pots and Bumblebee caps have never been changed, and it’s an all-mahogany body with the drilled wire channel straight from the output jack socket to the switch. The neck sounds really woody and flutey and beautiful, and then the bridge pickup is really spiky and Tele-like. Think of the Sympathy For The Devil solo and it does that. It’s a phenomenal guitar. You can play anything on vintage Les Pauls, but you can’t on modern ones.” 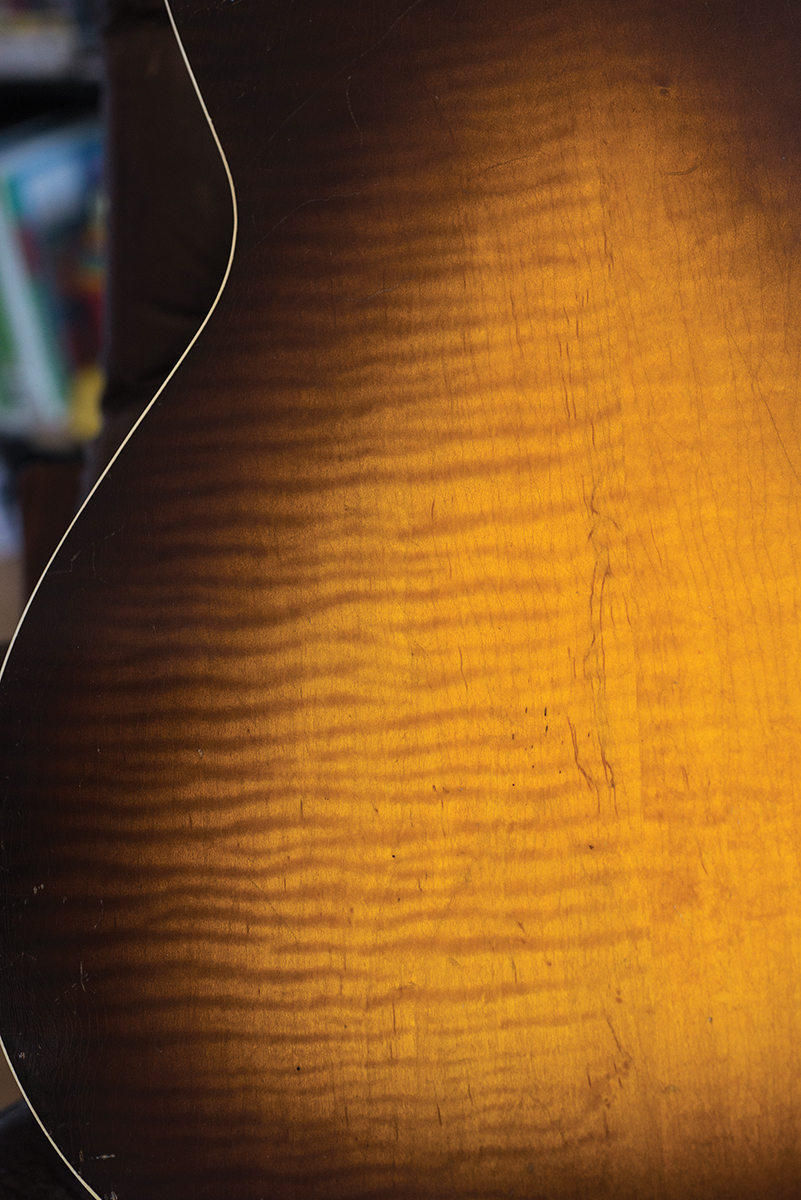 Having gone through a variety of Les Pauls, ES and jazz models, Rob became stricken with “a bad case of flattop sickness” and quickly acquired six vintage acoustics. The highlight is probably a 1930 Gibson L-2 in Argentine Grey with gold-sparkle binding.

“It was second-in-line to the Nick Lucas model,” Rob says. “Nobody knows how many they made, but probably about 200, so it’s really rare and unique in terms of its finish.
“It had been on the wall in No.Tom Vintage & Classic Guitars in Denmark Street for quite a while. I’d noticed it and knew what it was, but I didn’t know much about it. I always like to research something before I buy it and delving in, I discovered the regard this model is held in.

“It was one of the most expensive guitars Gibson made during the Great Depression, and it’s probably the most Martin-sounding, because it doesn’t have that ‘dry’ sound. It’s a lot more articulate than that and it even has a Martin look, with 12 frets and the bridge sitting lower on the body. My ’46 L-00 was on Denmark Street labelled as a ’49, but it had the script logo, which they only did from 1946 to mid-1947. So it was priced lower than it should have been. I’m into the history of these things, and this would have been one of the first guitars built by the Gibson guys when they got back from the war. That feels special to me.

“All my acoustics have mahogany backs and sides except my 1936 Gibson L-Century ‘Century Of Progress’, which has flamed maple. That thing’s a cannon, it’s incredibly loud. It started out as the Hawaiian Model with a whopping V neck and the action is fairly chunky. I bought it with the tall nut for slide playing and I didn’t want to convert it fully for regular playing.

“It’s a bit odd, because it has the pearloid fretboard, but it’s Brazilian rosewood underneath. I find the character so compelling and although it’s indulgent, I bought it for playing slide. Although I’m no expert, I like to use guitars for what their original intention was and be as rounded as possible in terms of what I play. I keep it in open D and sometimes take it up to open E, but those old Grover tuners don’t really like going above standard tuning.” 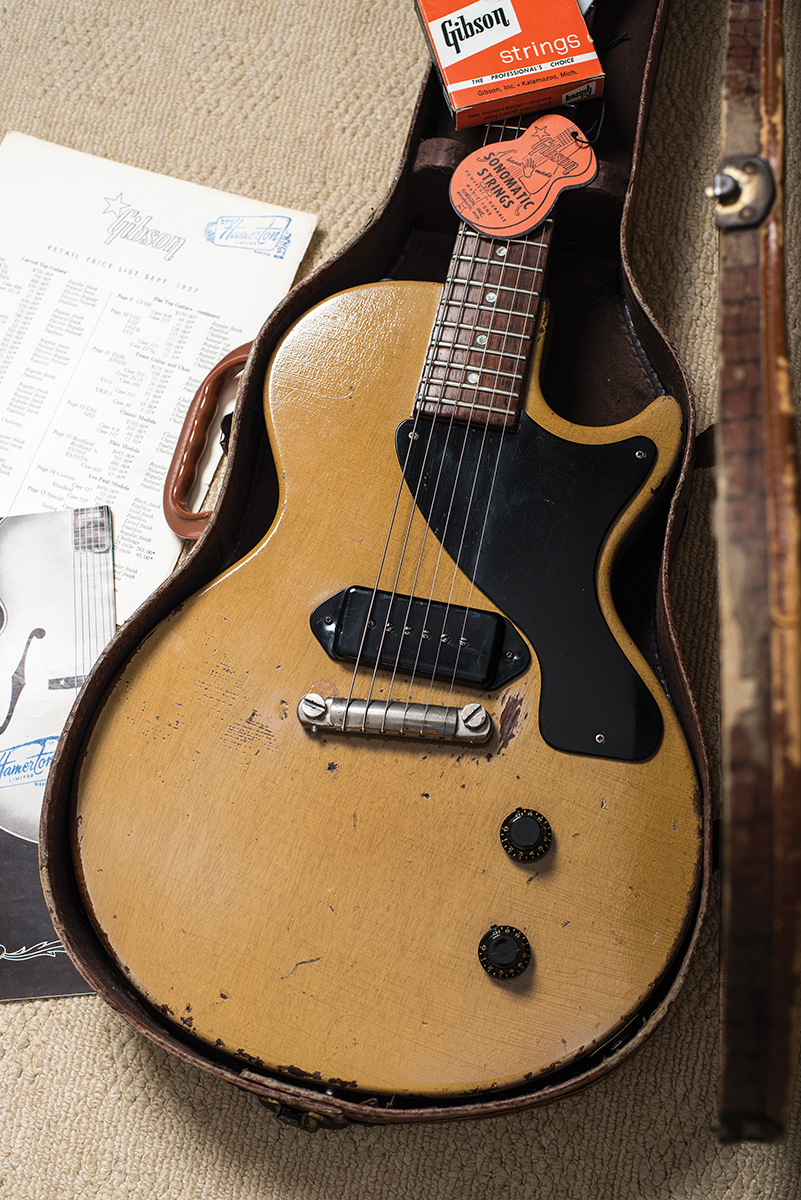 Acceptable in the 80s

Despite his love of vintage Gibsons, Rob is a man after our own hearts when it comes to reissues. “A lot of people who follow me on Instagram assume my blonde ES-335 is vintage, but it’s an 80s one,” he admits. “Owning a vintage blonde dot neck is an impossibility for most of us, so I wondered how close could I get. Vintage parts and pickups do make a massive difference, so I installed Patent Number pickups, real M69 rings and an ABR-1 bridge. The Bigsby and ‘Custom Made’ plaque are 1960s and the knobs, pickguard and switch tip are vintage, too.

“It’s the same story with my Les Paul Standard and, to an extent, both guitars are just borrowing these parts. If I find a vintage husk that’s missing parts, everything can be transferred across. I see it as having two full sets of parts ready for a Les Paul conversion, or a stripped ES-335 if something comes up. That’s another great thing about Gibsons. 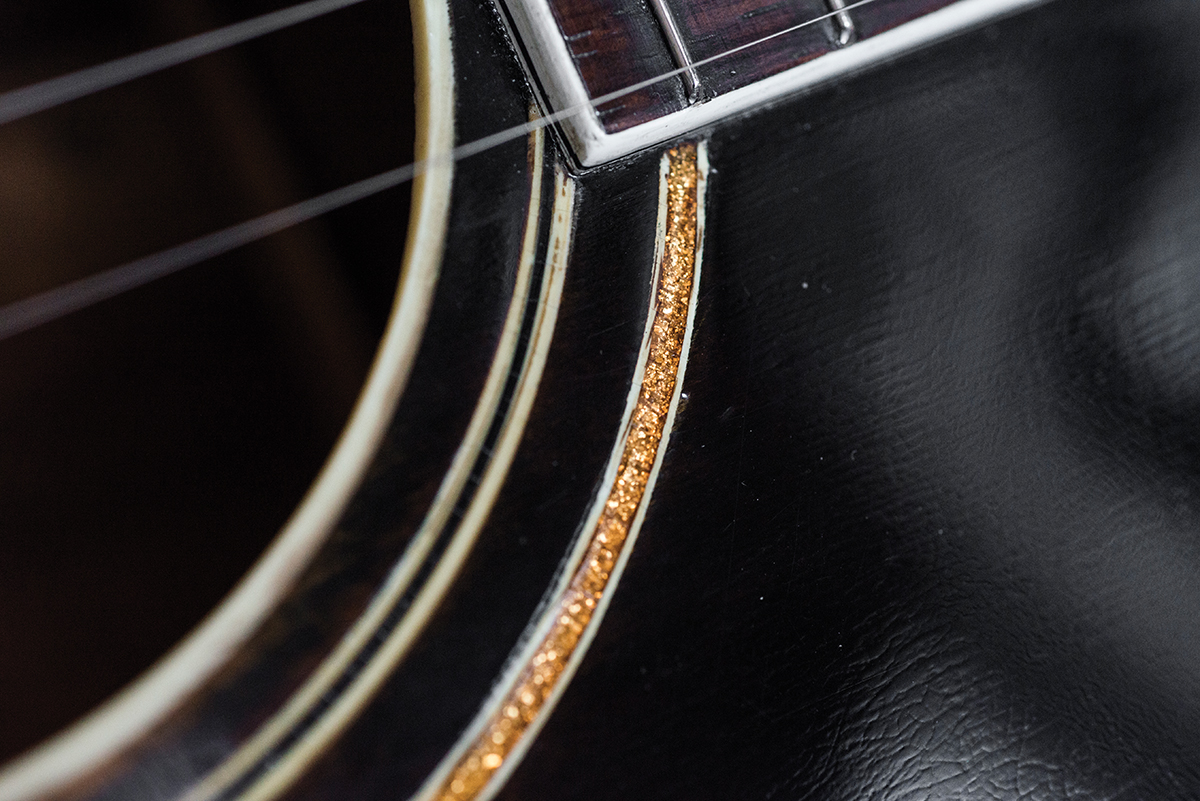 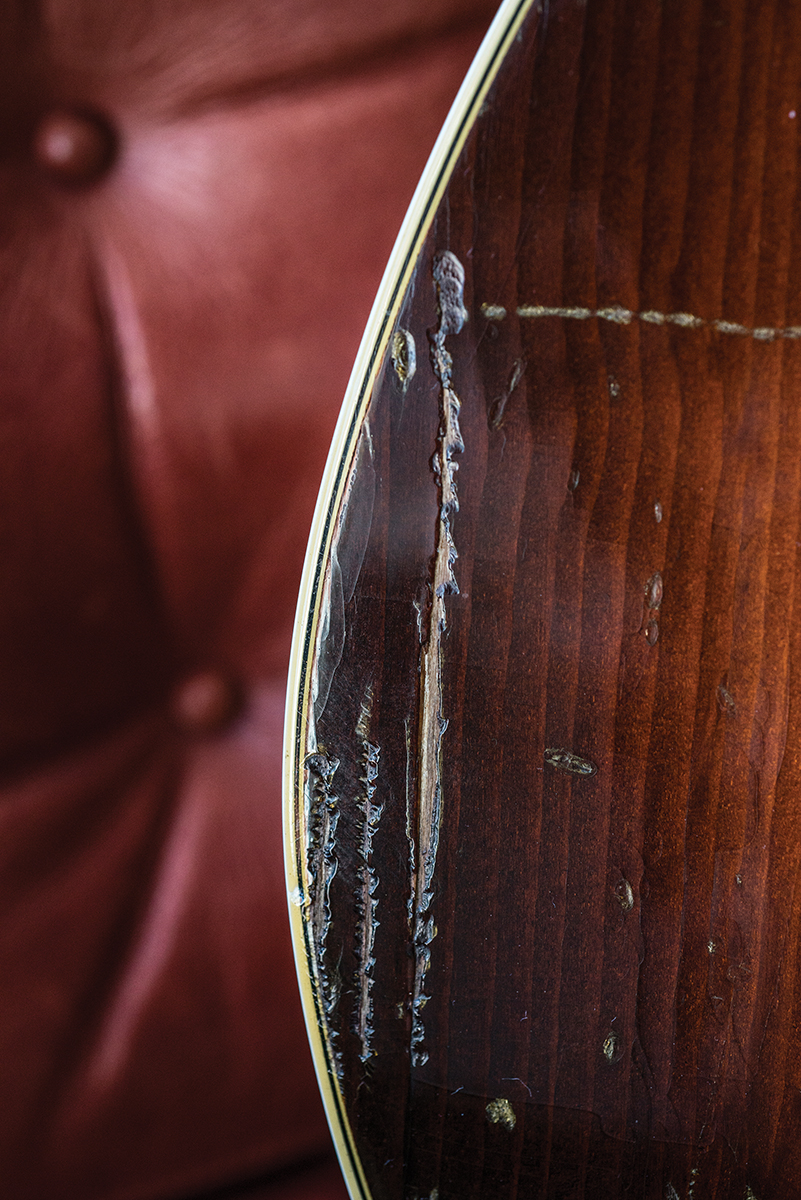 “The parts tended to span most of those models. With Fenders, you can’t put a Strat pickup into a Tele or vice versa. A Dog Ear P-90 is a Dog Ear P-90 and you can put one in an ES-300 or a Junior and all models in between. There’s something inherently different about the old ones, and while I don’t buy into the ‘vintage is always best’ thing, I think that it’s true of all the Les Paul models. If I had six grand to spend, I’d rather a beaten-up old Special than a modern True Historic Standard.

“For the price of some Collector’s Choice Les Pauls, you could get a vintage ES-330 and a 50s ES-225, and still have change. I don’t think people realise that it doesn’t matter if a guitar has had a headstock break, so long as it has been repaired well. Even if the guitar has been refinished, you still have Brazilian rosewood, Honduras mahogany and original parts and pickups, and they do sound different.” 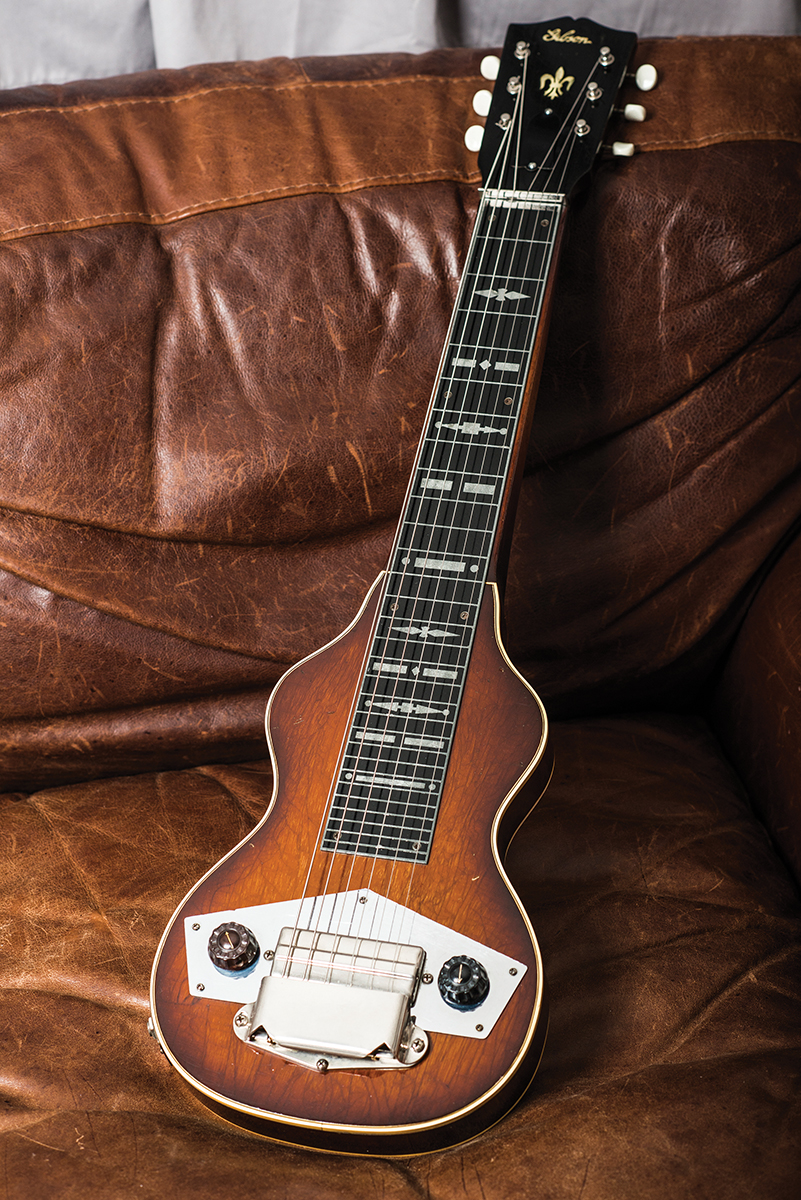 Before we leave, Rob imparts some more sage advice. “People think that collecting vintage guitars is a rich-man’s game, and to an extent that’s true. But there were so many midrange Gibson models, you can buy cheaper guitars that are every bit as good as the really valuable ones. The only way I can buy a lot of this stuff is by getting player’s-grade guitars.

“If I’d bought all these things in original condition, the collection would have cost me three times what I’ve actually spent. Sometimes, the value of a guitar with replaced vintage parts exceeds what I spent on it, but even if the increase in value just means I’ll just get my investment back, it makes the guitar far easier to sell.

“In the meantime, the guitars will get used because I play them at home and I’m happy to lend them out to friends for recording. That’s really important to me. They’re always good-to-go, in tune with fresh strings and they are all played regularly.”