Jay Edema and David McArthur have amassed a collection of guitars – numbering in the hundreds – that will make your eyes water. But their infatuation with all things strung goes way beyond simple hoarding or speculation.

What happens when your guitar collection gets out of hand? When your compulsion to buy erupts into an irresistible urge that never seems to ease? When one vintage instrument isn’t enough, so you buy three – just to make sure?

Fear not, help is at hand. There are support groups you could join, or you could seek professional advice. Failing that, you could unintentionally meet a like-minded soul with the same fixation and take your guitar collection beyond the realms of reasonable to the outer limits of indulgence, just as Jay Edema and David McArthur have done.

“The idea was hatched when we started working offshore in 2006,” says Jay, who is originally from the Netherlands, but now lives in Scotland. “We shared a cabin, but were on different rotas that coincided for a week at a time. That’s when we started talking about guitars.”

Jay is an offshore safety professional and David is a senior instrument technician in the oil industry. They work in the middle of the North Sea; both men have mission-critical jobs and share a robust and unstoppable obsession with guitars. Over the course of many animated conversations about guitars, a plan was hatched to join forces to create a monstrous collection that would eventually top more than 770 instruments. Just let that sink in.

“Our obsession got out of hand,” David explains, calmly. “If I wanted to stay married, I had to find somewhere for my guitars to go, and this place came up. It seemed logical. It was somewhere I could play my guitars without disturbing my neighbours. And it saved my marriage, because my wife had lost the plot about the amount of space in our house that was being eaten up with guitars.” 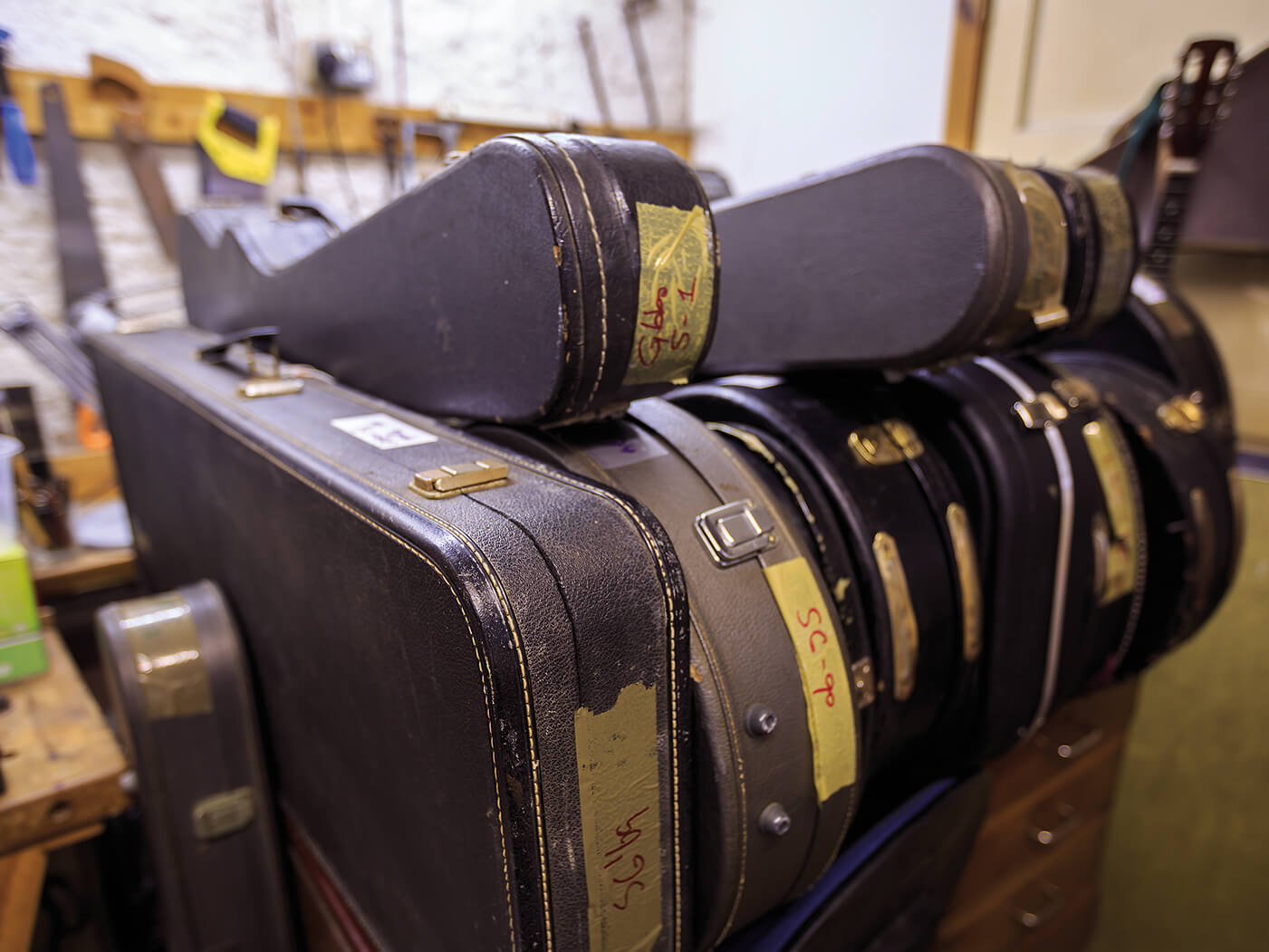 David’s refuge was a former jewellery shop found in the corner of a Fife steading that had been transformed into a craft centre. Behind a blue door and up a flight of stairs, you’ll find Unique Guitars – a truly surprising find and a rarity these days, in that it promises little from outside and over-delivers when you enter.

“When I was younger and couldn’t afford anything new, I developed a habit of never even looking at new guitars,” says David, who shares his bolthole with his dog, Haggis. “I would waltz past all the new stuff at the front of guitar shops and go straight to the second-hand stuff at the back. I wanted my shop to be full of the stuff that you got at the back of guitar shops. All the good stuff.” 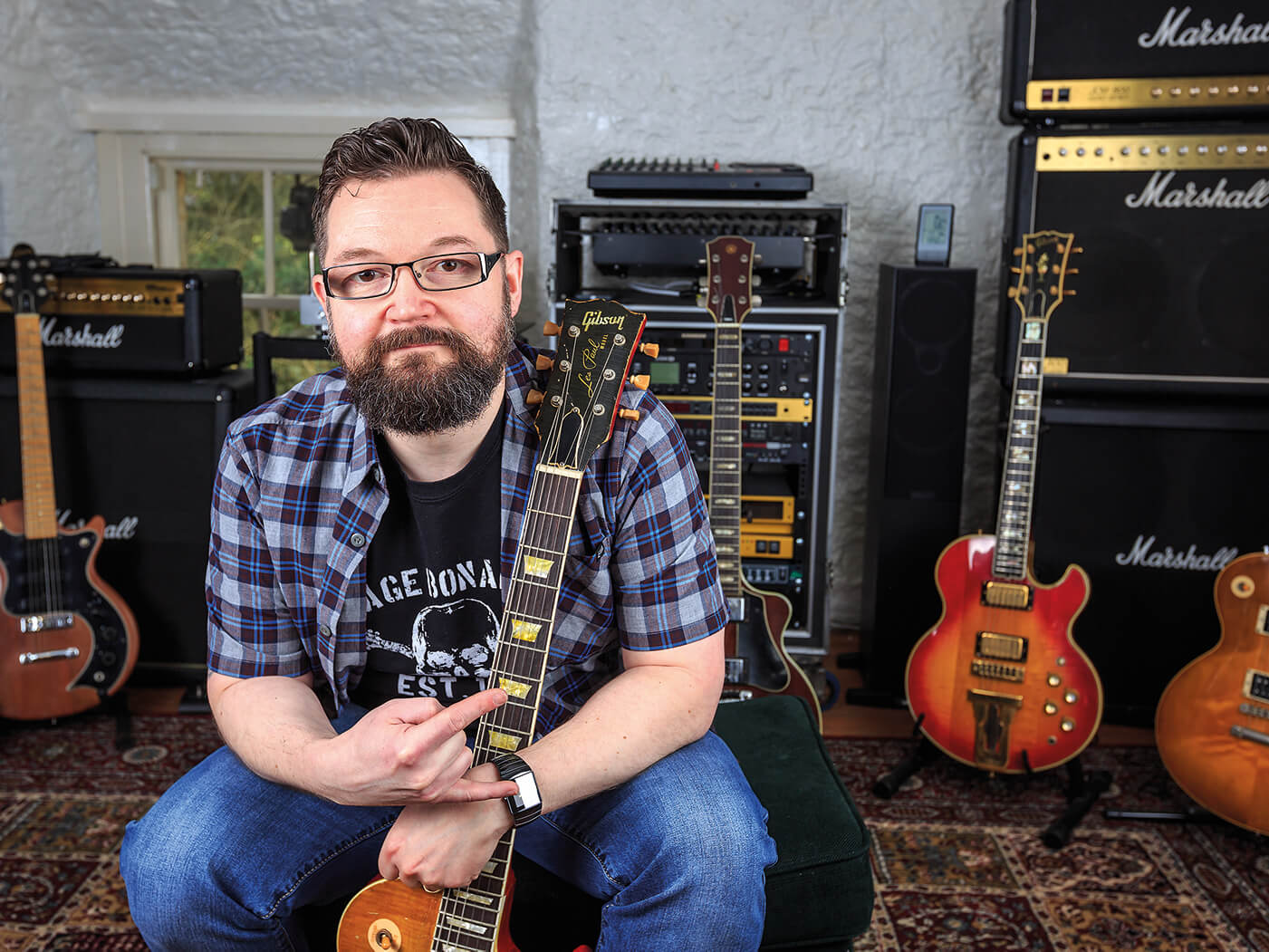 David turned his marriage-saving repository into a guitar shop nearly two years ago. And like any good guitar outlet, it impresses as soon as you walk in. There’s an immediate rush of possibilities when your eyes pan around the walls stacked with rare and familiar instruments. With wall space for over 20 guitars and a further selection on floor stands, an acoustic room and a large storeroom packed with guitar cases, there’s a lot to take in. The scene is completed by a range of amps including Mesa/Boogies, Fenders, Marshalls and Voxes. Were it not a shop, it would be a man-cave to be proud of.

Unique Guitars is unconventional and gorgeously independent. More importantly, it’s all about buying used. “The mojo and feeling you get from an old guitar – it’s a connection that you just don’t get with a new guitar,” says David. “That’s the whole ethos of this place. This isn’t really a shop run for financial gain. It’s been run because we’re two stupidly obsessed guys that can’t get enough guitars.”

Jay grew up listening to Radio Luxembourg, prog rock, metal and rock ’n’ roll. It would seem reasonable to assume his preference for guitars would be equally diverse. But while his collection – Elite Vintage Guitars – has grown to incorporate Gibsons, Fenders, Guilds and Peaveys, one particular guitar has dominated his musical anthology.

“My first guitar was a copy of an SG. Then I bought my first Yamaha SG-500 and then an SG-700,” he says. “I’d never seen anything like the Yamaha SG. I got it second-hand. It was heavy. It felt like something substantial. I bought it from a shop in Holland in 1977. Even back then, it was a significant outlay – it was quite a few weeks of newspaper rounds and pocket money. So before I bought one, I made sure I had played quite a few.”

Since then, he has continued to save his pennies and has amassed 123 SG models – he has 189 Yamahas in total. “You can never have too many guitars,” he says seriously, “but there is a maximum you can fit in your car!”

While the numbers might be staggering, there is a more pertinent question – why fixate on the SG? “The upper models, like the SG-1000, could sound like a Strat or Les Paul because of the option of coil-tapping. I thought it was a very versatile guitar,” he says. “And I’ve always been a fan of Carlos Santana, so when I saw him playing one, I thought; if it’s good enough for him, it’s good enough for me.”

David also had a moment of clarity in his early years of collecting. “There were two guitars that really changed things for me. When I was 16, I was obsessed with metal and grunge music and I picked up a Charvel 650, which I still have. I was playing in bands so I needed a back-up guitar and managed to pick up a Tobacco 1981 Les Paul Standard. It was beaten to death and it hardly had any frets on it, but, by god, it was one of the sweetest-sounding Les Pauls I’ve ever had. It had a played-in feel that you can’t get from new guitars. That rewired my brain. I wished I’d kept it.”

More than a shop

“Apart for buying and selling, we also meet incredibly interesting people,” says David. With an astonishing sense of community and philanthropy, Jay and David open up their collection to musicians, inviting the likes of Big Country, Tank and The Sin Dogs to tour with their guitars in return for little more than tales from the road. It’s trusting and refreshingly generous.

“My collection of guitars is not just for my benefit,” says Jay. “I let musicians use them and they come back with signatures on them, so that adds to the collection. And they pay absolutely nothing for it. It’s just something we want to do.”

David agrees: “A lot of it is for the craic. I haven’t played in a band for 10 years. We love meeting these guys and it has rekindled my interest in playing and to get back into the scene.” 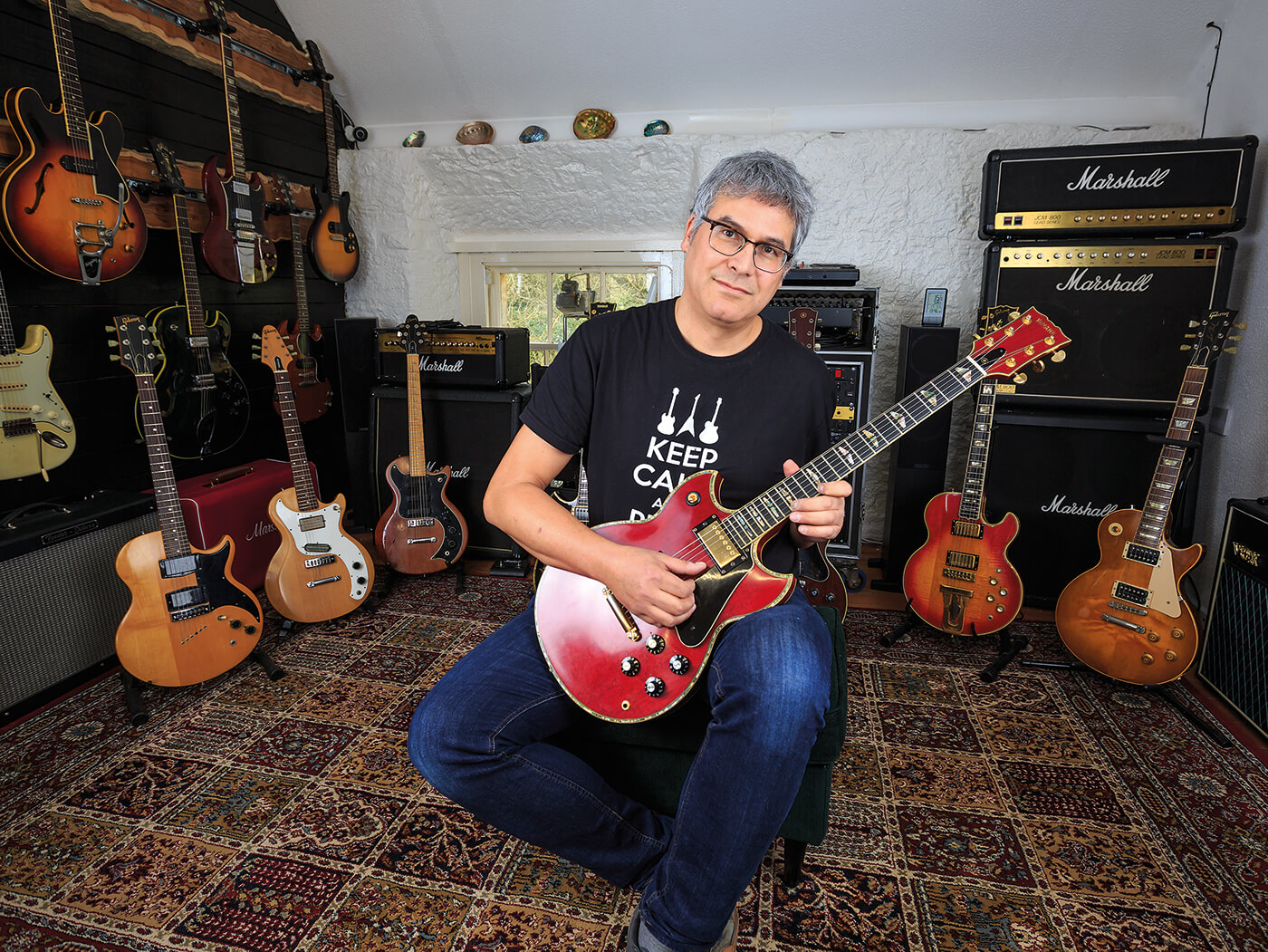 Unique Guitars and Elite Vintage Guitars are more than just shops or collections of guitars. It provides passage for an incurable addiction. It is therapy and indulgence in one, and it has taken the duo into another sphere of influence with Ghost Guitar Pickups.

“I bought a guitar from a guy in Hartlepool,” Jay recalls. “I sent him the cash, but he never sent me the guitar. One of the administrators for the Facebook selling page was Wilf Vissenga, who runs Ghost Guitar Pickups. He helped me sort it out. A lot of good came from that and we started to work with him, putting his pickups into our vintage guitars. Bruce and Jamie Watson from Big Country took the guitars with the Ghost pickups out on the road, and they’ve been using them ever since.”

The pickups are designed and hand-wound specifically to the needs of the guitarist in a workshop in the North East of England. It’s a concept the pair has introduced to Zal Cleminson, former guitarist with the Sensational Alex Harvey Band and Nazareth, and the rock quintet Tank.

Jay and David are kindred spirits who share an unquenchable obsession. Their triumph is not the number of guitars they have assembled, but how they’re using them to indulge their love of music.

If ever a story supports the idea the more you put in, the more you get out, this is it. Jay and David could have shied away from sharing their incredible collection, but instead created a process by which they could indulge their fascination, reacquaint themselves with the music industry and ensure vintage guitars are played where they belong; on stage.

Carlos Santana thanks and reassures fans after onstage collapse: “We are good just taking it easy”