Mississippi native Kris Blakely has one of the most breathtaking guitar collections we’ve ever encountered, ranging from instruments that saw action in World War II, to Paul Kossoff’s 1959 Les Paul Standard. 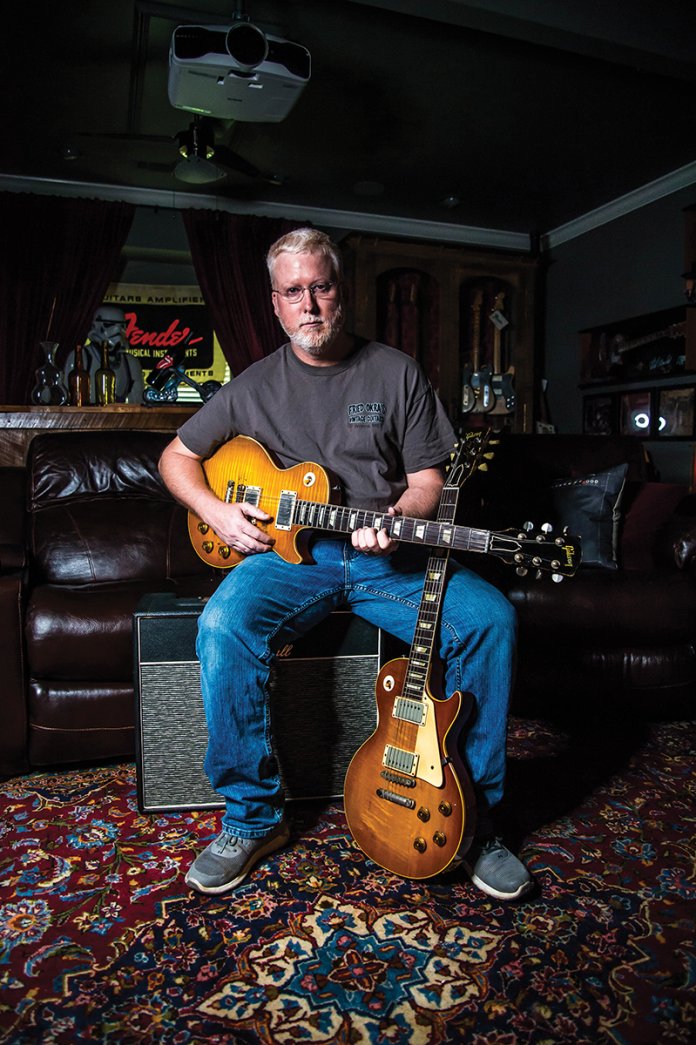 If you’ve ever whiled away the hours gazing at fine guitars on the internet – and if you haven’t, it’s entirely possible that you are reading the wrong magazine – you may well be familiar with Kris Blakely, especially if your lust for gear has led you to The Les Paul Forum or Instagram, where Blakely goes by the name ‘Fried Okra’. 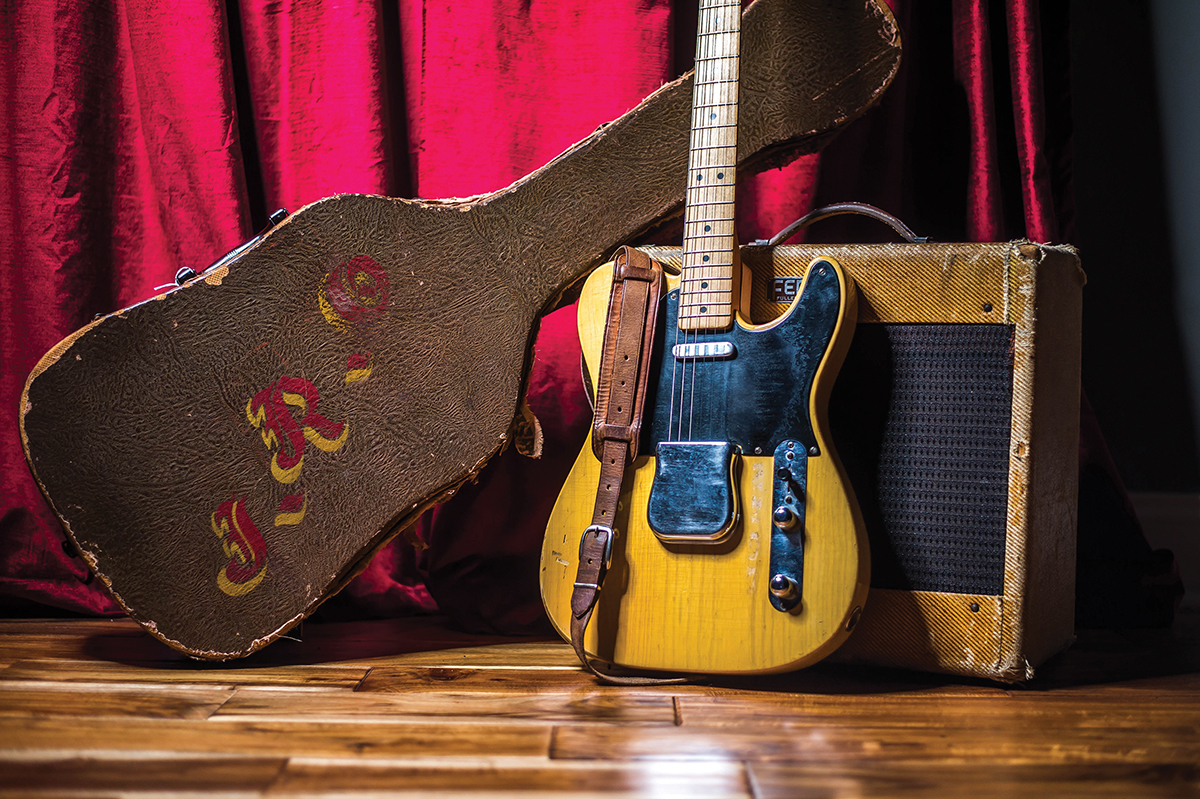 A popular Southern dish made by frying battered okra in a cast-iron skillet until it’s crispy, Fried Okra became Kris’s nickname over 30 years ago. As a somewhat worse-for-wear 17-year-old at a house party, he caused a small fire while trying to satiate a case of the munchies by throwing a frozen box of breaded okra into a very hot pan… and promptly falling asleep. Happily, there were no injuries, but the nickname stuck.

Like so many Southern families, music went way back in the Blakely house: “It all started with my father, as well as his family,” Kris recalls. “They played various stringed instruments, guitars, mandolins, banjos, et cetera. Every year we have a family reunion back in the hills, near the old stomping grounds as the old folks say. Though it’s becoming less every year, it’s still a lot of bluegrass and gospel music played whenever the old timers get together. It really is something special.

“My dad, a brother of nine, grew up with his father ‘Pawpaw’ cutting and hauling pulp wood. Pawpaw was known for making moonshine for a meagre living. After spending time in Parchman [Mississippi State Penitentiary] he decided to get out of that business. My father, not wanting to struggle like his father, started a commercial roofing company in 1966 and became quite successful.

“I remember he would come in from work late in the evenings and play some blues shuffles or some Elvis chords, it was a wonderful time. When I was about nine years old in the late 70s, my dad gave me my first guitar for Christmas. It was a small Harmony parlour-style guitar, which I still have to this day. I guess I really did start collecting early!”

We wonder exactly when he felt the collecting bug bite. “It was thanks to my best friend Trip’s brother-in-law Mike,” Kris replies. “He was an attorney in Memphis and one hell of a guitar slinger. One summer break around 1990, Trip and I went to Memphis to visit his sister. While visiting Trip said, ‘Okra, let me show you Mike’s killer old Les Paul.’ It was a 1959 Sunburst Les Paul, and when Mike plugged it into that old Marshall, well, I was blown away. Not knowing much about vintage guitars, Mike showed me what they sold for in a Vintage Guitar magazine. Good lord! I had no idea. So my pursuit of vintage guitar collecting began.”

After college, Blakely married his high school sweetheart and went to work for his father’s roofing business. Travelling around the state with work proved fruitful when it came to guitars, too: “We covered most of Mississippi, so I was all over the state daily. Back then you could walk into a smalltown pawn shop in Mississippi – we had a lot – and still find vintage Fenders, Gibsons, Rickenbackers, Martins…” 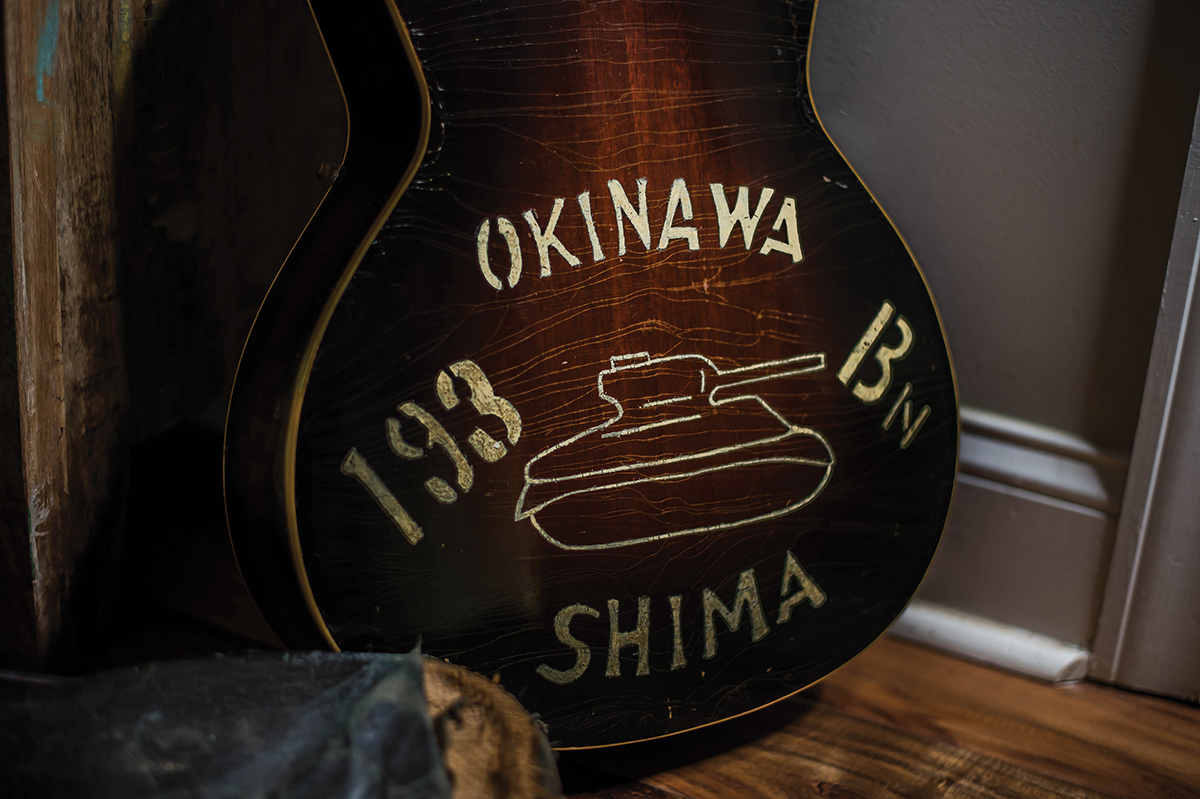 During his daily routes, Kris would stop at pawn shops, old music shops and call in on musicians. Buying and getting leads on guitars and amps – always picking up his weekly copy of TradeWinds magazine for the local yard-sale listings – like most collectors, Kris would keep some of his treasures but also (despite sometimes regretting it later) sell them on, “to make a few dollars to keep my guitar-collecting addiction going.”

“When the internet and eBay came along, the pawn shop deals slowly began to diminish,” he remembers. “It was the end of an era. Back in the late 1990s I was checking out a roof leak in a customer’s attic and found a pre-Civil War Martin parlour guitar. Regretfully, I sold it on eBay to a gentleman in Australia. And I guess my last real pawn shop prize was a 1966 Candy Apple Red Strat I found back in 2000, which ironically I also sold on eBay to a guy in California. 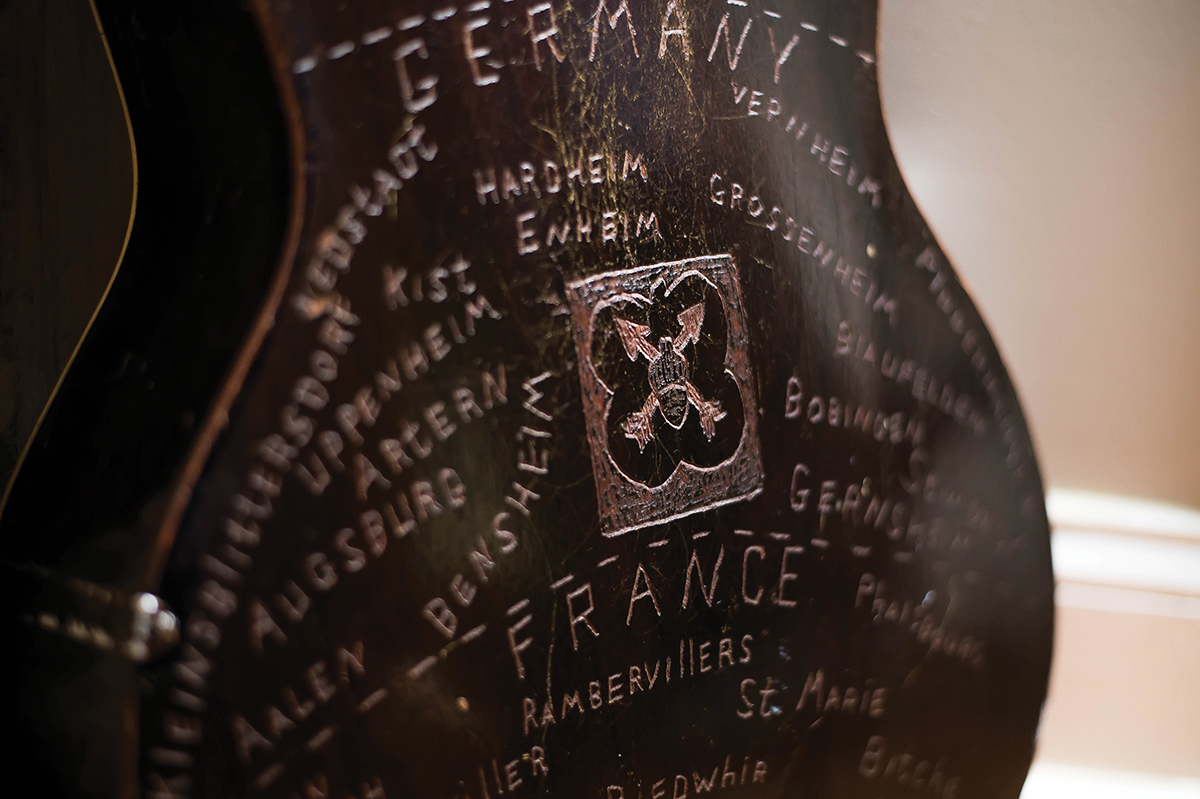 “In late 2004 I went through a pretty dark time in my life and just stopped playing and collecting for about five years. As BB said, ‘The thrill is gone’. I mean they just sat in my music room and collected dust, I didn’t even open the door to that room anymore. In 2010 I heard that Gibson was releasing a recreation of Paul Kossoff’s famous Les Paul, and being a fan of Paul Kossoff, I had to have it. Since then I have found contentment and enjoyment in collecting again. Fried Okra was back!” 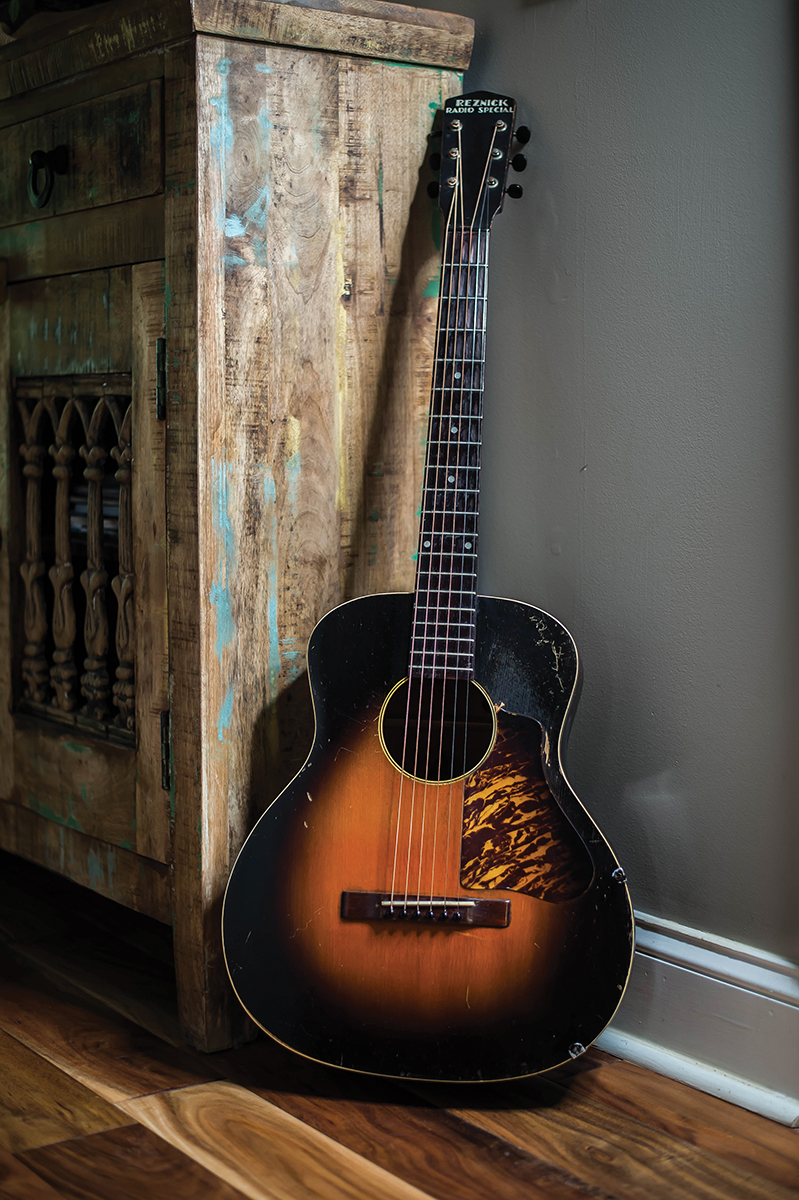 Kris didn’t stop with Gibson Custom’s recreation of Paul Kossoff’s Les Paul, however. In 2016 he had an opportunity to acquire the real thing. “Since the day I played Mike’s 1959 Les Paul, 28 years ago, I had the fever for a Burst,” he admits. “Over the years I had collected quite an arsenal of guitars, but not a real Burst. One day as I looked over my horde, I thought to myself, if I would thin the herd, I could buy a Burst. Okay, that’s settled. What Burst would I buy? And with so many fakes and questionable Bursts out there, I’m not taking any chances.”

Although in some respects the internet has made it tougher for the guitar collector to get what they want for the price they want to pay, this time the web came to the rescue: “Thanks to The Les Paul Forum and friends, David Plues, Vic DaPra, Charlie Daughtry, Mike Slubowski, Tom Wittrock, Joe Bonamassa, Scott Softy, Drew Winn et cetera… I was able to come to a decision that made sense.

“In 2016 David Plues emailed me and asked if I was interested in the Kossoff Burst. I first thought, yeah right. Me? I’m not worthy of Kossoff’s Burst. Besides, I would catch flack from the Kossoff fans for owning it and it not going to a professional player. My pal Vic DaPra said, ‘If you want that Burst, get it. And don’t worry about what anyone says.’ Good enough for me. So, negotiating began, contracts were drawn up, pay schedules agreed on. David Plues was very instrumental in mediating the whole thing, a genuine Scotsman and a great friend.

“The hard part of thinning the herd began, so I called up my good friend Drew Winn to come and load up his van and get to selling. My wife Tonya and daughter Ana were both very excited about the Kossoff acquisition. I think as a collector, your family can get a little complacent about guitars, and they don’t ever get as excited as we do. So to have them be so enthusiastic about this was awesome. At first I was going to just hop on a plane, go get it and come home. But I thought, why not make this a family vacation?”

The ultimate guitar-buying trip ended up being combined with a sightseeing holiday, as Kris and his family explored Edinburgh and its beautiful surroundings. But it was soon time for the main event: “As we travelled via train from Edinburgh to Newcastle along the North Sea, I was able to reflect on the fact that in a couple of hours I was going to be the new caretaker of one of the most iconic guitars of all time. And that’s when it hit me, it hit me like a brick thunderstorm. I am going to own Paul Kossoff’s legendary broke-neck Les Paul.

“Upon arrival at the station we met David Plues and [the Kossoff Burst’s then-owner] Arthur Ramm, from where they drove us to Arthur’s home. Arthur said, ‘Well, let’s see what you travelled all this way for.’ Those are the words I will remember for the rest of my life. And there in his music room was Paul Kossoff’s infamous Burst. I was so excited that I was trembling, I completely forgot how to play. I couldn’t even play a simple blues shuffle that my father taught me when I was a kid. I think for Arthur it was a very emotional time, as he had been the amazing caretaker of it for 40 years since Koss’s passing.” 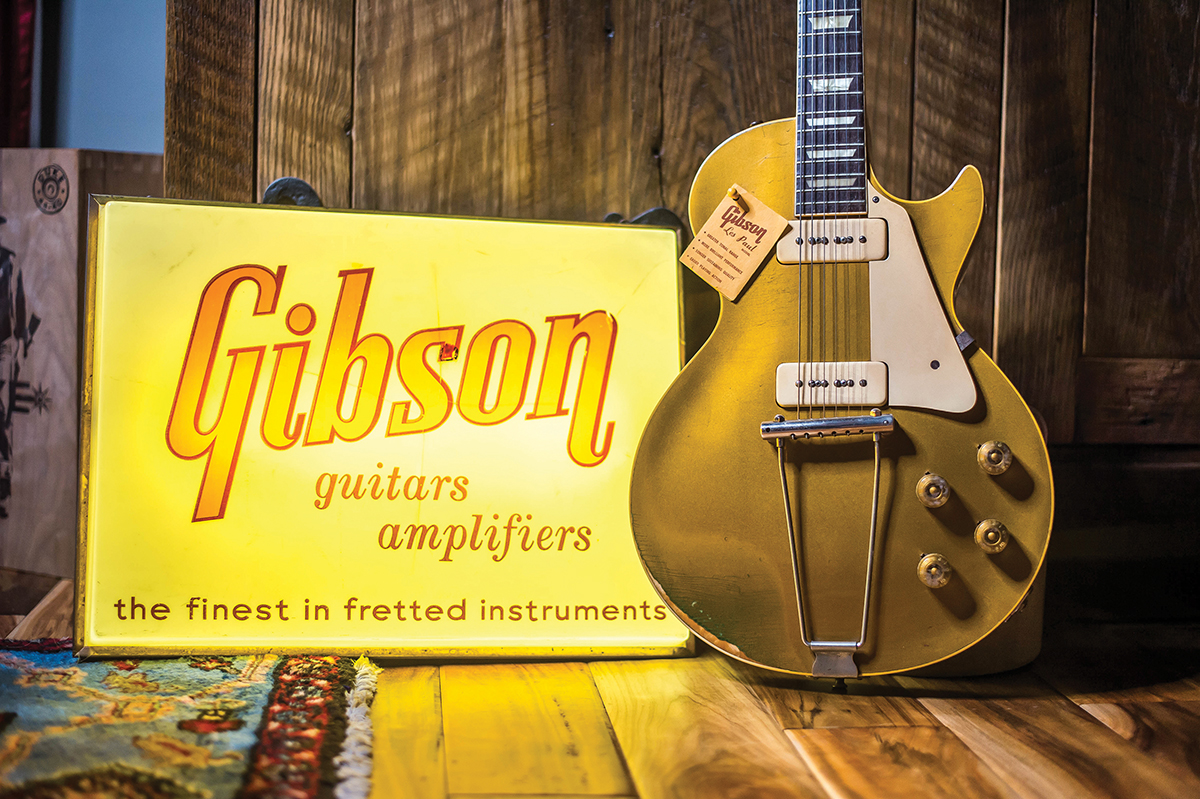 The Kossoff Les Paul is far from being the only guitar in the Blakely collection with a great deal of history attached to it. His treasure trove also contains a 1934 Gibson L-75 and Gibson-built 1937 Reznick that travelled with their former owners through the Pacific and Europe respectively during the Second World War. “I love World War II history and have collected many items from the European theatre and the Pacific theatre of WWII,” says Kris.

“Since I have a passion for guitars, I have always wanted a stringed instrument from that period. One day I received a message from a friend and fellow collector Arthur Forni, that he had found a 1937 Reznick on the internet and said he knew I would be interested in it. Of course I had to have it.

“It belonged to Norman Byerly, who had carved on the back his tour as he travelled through the European theatre of World War II. It is a Gibson-made model KG-11 [usually seen badged as Kalamazoo – Ed] built for the Reznick music shop out of Greensboro, North Carolina. Shortly after, Arthur messaged me about a 1934 Gibson L-75. Again, I had to have it. Belonging to Emmett H Atkinson, this one was taken to the Pacific theatre of WWII. It was hand-painted in true early American art form, a long-gone skill. Finding two guitars, one from each theatre of World War II, is definitely one of the highlights in my collecting career.”

Although Kris already has a pretty comprehensive collection, we suspect that he isn’t finished just yet. “Most definitely” is his response when we ask if there’s anything he’d still like to add. “I would love to add a Fender Broadcaster and Nocaster to, as Joe B calls it, the ‘Okra-seum’.”