Working musician Willie Logan has seen a lot in a career spanning four decades and taking in 4,500 gigs. We check out his guitar collection and find out about the instruments he’s loved, lost and modified along the way… 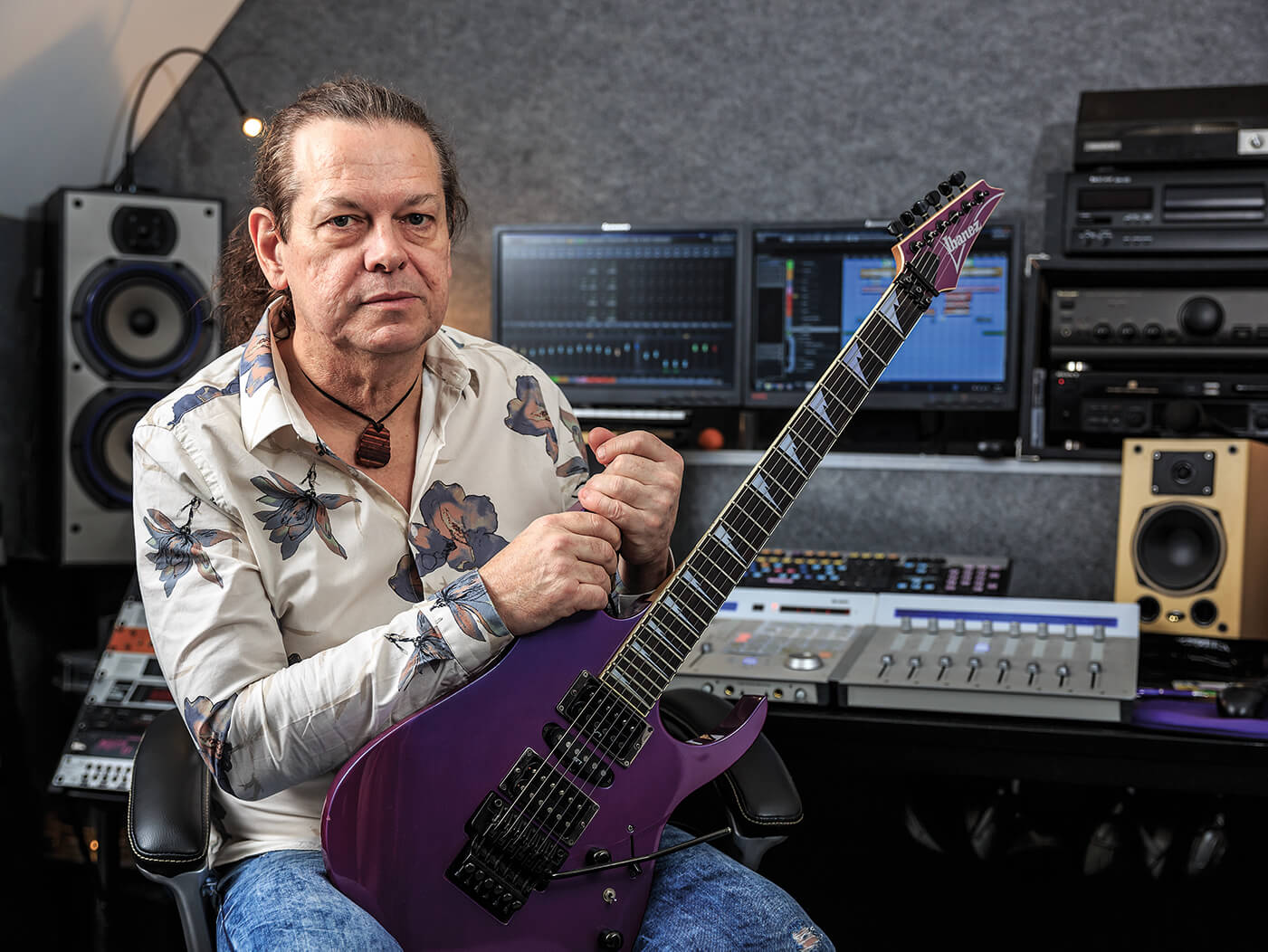 When we meet at the tail end of 2018, Fife-based guitarist Willie Logan has gigs lined up on Friday, Saturday and Sunday nights, and another on Christmas Day. “I have to,” he says. “It’s what I do for a living.” We catch up with Willie in one of his local haunts – a social club a few miles outside of Dunfermline. As though to prove he’s a fixture on the local scene, as we discuss Willie’s guitar collection, a cleaner wanders into the large, open room keen to discuss his previous performances, debating the merits of live music and his rapport with the locals.

Willie started gigging when he was 15, taking the stage at his high-school dance armed with three songs, a catalogue guitar, an Orange amp and a 4×12 speaker cabinet. He may have been loud, but he was far from polished. “I didn’t have a clue what I was doing,” he laughs. His debut performance may have been rough and ready – he inexplicably turned up to the gig with a bass guitar he had built for his bandmate out of a wardrobe door – but it sowed a seed that would see him playing an average of two gigs a week for the next four decades; taking a bow on nearly 4,500 occasions. Willie has also racked up 16 album releases and amassed a guitar collection which, at its peak, numbered 50 instruments. 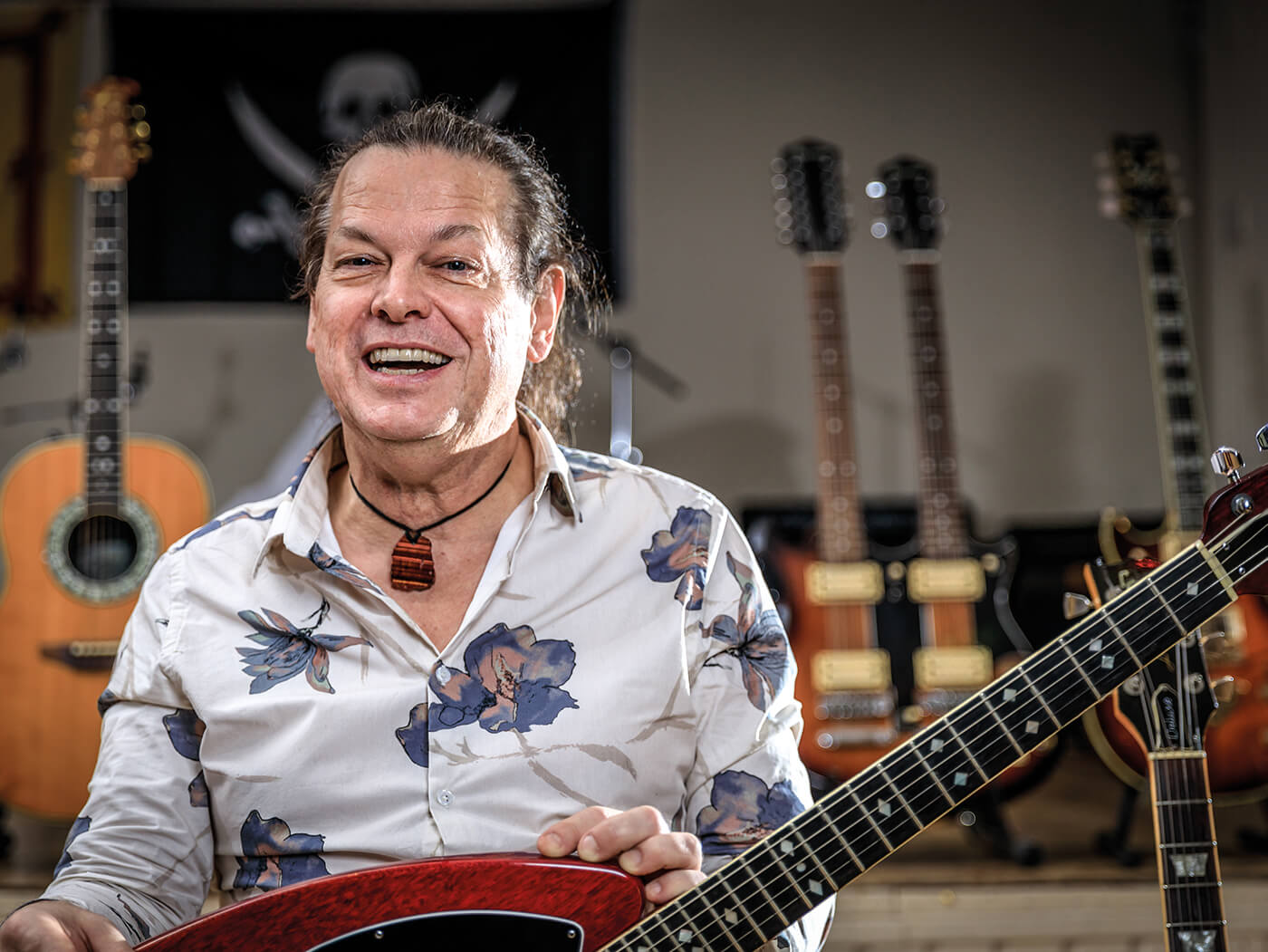 His is a career of highs and lows, punctuated by his fascination with guitars. “I’ve got to that stage in my life when I’ve got all the guitars I need,” says the 57-year-old. “I know people say ‘there’s always room for one more’, but I haven’t got any room left!”

Originally from Edinburgh, but now living in Fife, Willie’s first guitar was a £10 sunburst Kansas acoustic ordered from a catalogue. It bore the brunt of his restless creativity, as he planed the neck to make it feel more like a Fender. His tinkering “completely destroyed” the guitar, which he still owns today – although admittedly, it’s in bits. This tendency to tweak has accompanied him throughout his career, with most of his guitars bearing some signs of his tendency to modify.

Earnest in his pursuit of tone, Willie now goes about his business in his small but perfectly formed studio. Neatly tucked away in a converted attic, the studio bares all the hallmarks of his obsessive nature, and is where he feels most content. “I love writing, recording and being creative,” he says. “Gigging is what makes the most money but it can be the opposite of being creative, especially if you’re being paid to play in pubs and clubs.”

His custom-built studio is also home to an impressive guitar collection that mainly resides out of sight behind a drawn curtain. A few instruments remain within easy reach, propped up in the room’s guitar rack. They include a 1991 Gibson Les Paul Standard in a deep Wine Red; Willie’s first Lester, which was bought second-hand using money borrowed from his parents. “I’ve just rediscovered it and use it for clean tones, especially on the bridge pickup,” he explains. 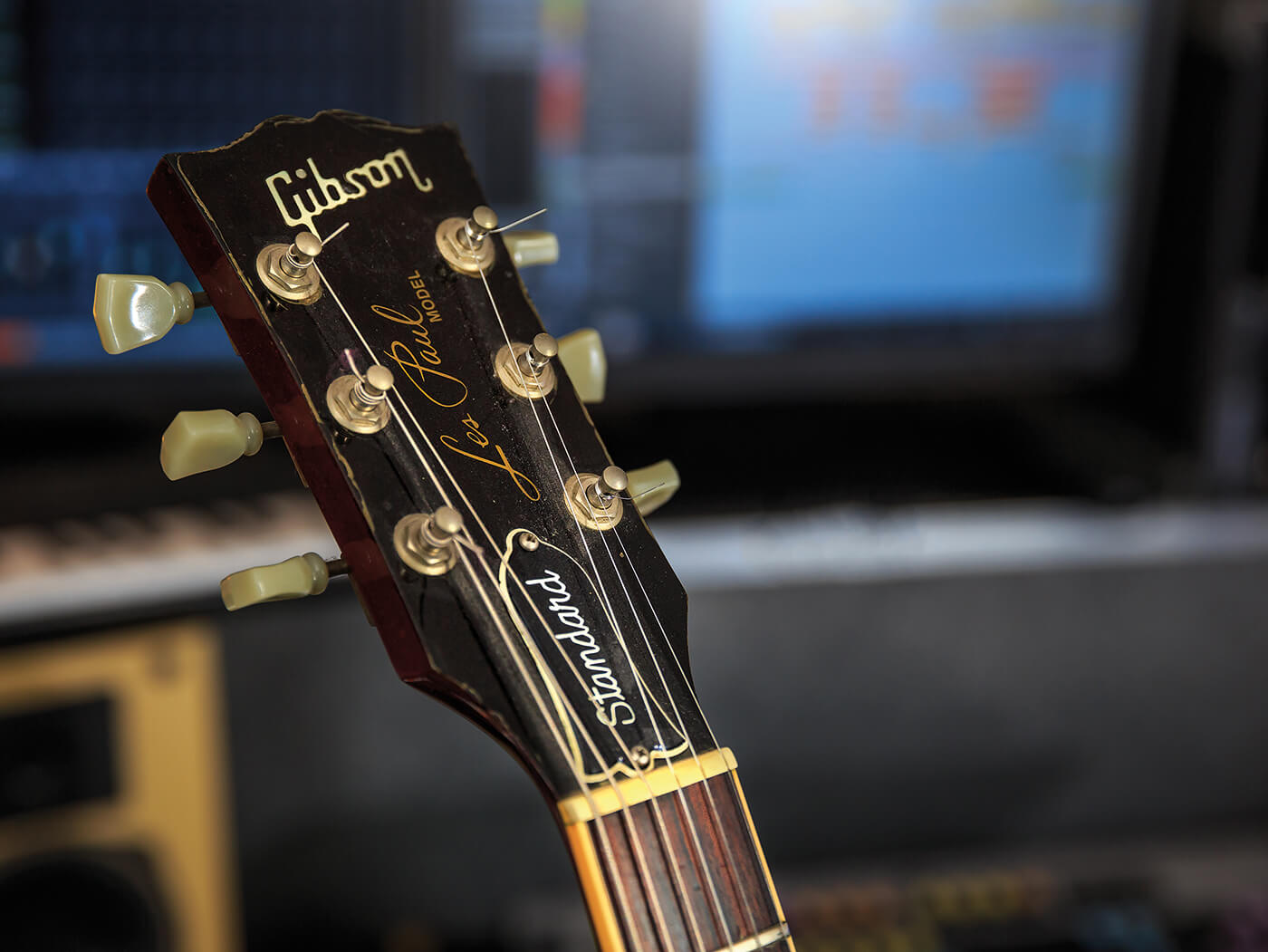 Another is an Ibanez JEM Floral Pattern, acquired because he liked the look of the elaborate design, but which is rarely played. By contrast, his unassuming 1989 Ibanez RG has served its time well, and gives us our first proper taste of Willie’s fervent approach to guitar customisation. “I used this guitar constantly and then retired it, and have only recently started playing it again,” he explains. “It has a very thin neck. I replaced the original because I wanted a shark-tooth-bound neck,” he explains. “The normal Ibanez wiring means the humbuckers automatically coil tap, with the middle pickup staying hum-cancelling. But you don’t get single coils, so I had the guitar wired in such a way that when you flick the switch, you get the single coils. You get extra sounds from the middle pickup. It’s very subtle, but you get different levels of attack on certain strings.”

Hanging on the wall in the studio is a Fender Precision Bass which, Willie proudly informs me, was owned by the glam-rock band Hello back in the 1970s. It appears to be untouched, until you spot the treble pickup. “I was working in a studio in the 80s with some of the ex-members of Hello. I decided I needed a new bass and bought it from the studio,” Willie recalls. “But I simply couldn’t leave things alone, so I got Chris Cross, who used to work with Patrick Eggle, to rout out a bridge pickup and by doing so, probably wrecked the value of the guitar, but that’s what gives me my bass sound in the studio. It’s so distinctive. It’s great.”

The guitars played an important part in Willie’s latest release Too Many Hats, where he pays homage to some of his musical heroes, such as Focus, XTC, Bowie and Queen. Away from the studio and on the stage, Willie mostly relies on his incredibly versatile standard Fret-King Corona.

“I use it all the time when I’m playing in my function band Sphere,” he says. “We’re just guitar, bass and drums with a female vocalist, so I need to play guitar synth as well these days. I fitted the Fret-King with a GK-3 pickup and that has become my main guitar. It makes all of my other guitars kind of redundant when I’m playing with the band. It’s a small sacrifice; it makes life really interesting, because I have to think about what I’m playing.”

As well as adding synth capabilities, Willie made a few minor adjustments to the Fret-King’s pups. “I changed the bridge pickup to a mini humbucker, because I wasn’t convinced about the full-coil setting on the original P-90. However, the tap setting of the P-90 was stunning. When I can be bothered, I’m going to put it back, because the original Wilkinson pickup was phenomenal.” He neatly pairs the Fret-King with his LAG Masterbuilt Jet 1000 with DiMarzio pickups and a Wilkinson bridge. “The clever thing about this guitar is its locking machine heads,” he says. “When you pull the strings through and start tightening them up, the head cuts the end of the string.”

Willie brings out a handsome pair of Fenders, both with rosewood fingerboards, beefed-up bridge pickups and tortoiseshell scratchplates. “The Sunburst is a California Series Strat from 1997,” he explains. “The wiring has been changed, so that if you push the bottom tone control it turns on a coil that is wired in series with the neck pickup, to give it humbucking properties and a thicker sound. I toured Germany with that guitar. I bought it new and love it. I also have a black 1980s Japanese ’62 reissue that I’ve messed about with. It has the same wiring.”

To get a sense of Willie’s ruthless tinkering, you can add a Kent Armstrong bridge pickup to the Sunburst and a Fat Strat neck pickup, Ibanez S1 and an Artec bridge pickup to the black Strat. Like many of us, Willie is clearly a guitarist with an elusive sound running around his head that’s tantalisingly close and yet forever out of reach.

Willie’s next offering crosses the tracks into the tonal world of Gibson, and in particular the ES-330. The thinline hollowbody is associated with both the fat, warm tones of blues and jazz and the jangle of the mid-1960s British Invasion. This 1963 model has all of the above, and somehow escaped Willie’s probing soldering iron – as did all his Gibsons. “When I got it, the bridge was a sawn-off Bigsby, which was incomplete,” he recalls. “I managed to pick up a replacement tailpiece which I tried to buff up to make it look old. That’s the only thing on the guitar that’s not original.”

His Les Paul Deluxe Goldtop is a throwback to the era of flares, glam rock and platform soles and its pair of mini-humbuckers deliver a brighter tone than his Wine Red 1991 Standard. For Willie, this 1979 guitar is an important addition to his collection, albeit a hefty one. “It’s a guitar I’ve always wanted. When this one came up, I swapped it for some cash and a Tokai,” he says. “The guitar weighs a tonne. It is really heavy, but I’ve used it on many recordings, in particular my House Of The Rising Sun album, on Watching From Behind. It’s all-original apart from the scratchplate, which I added.” 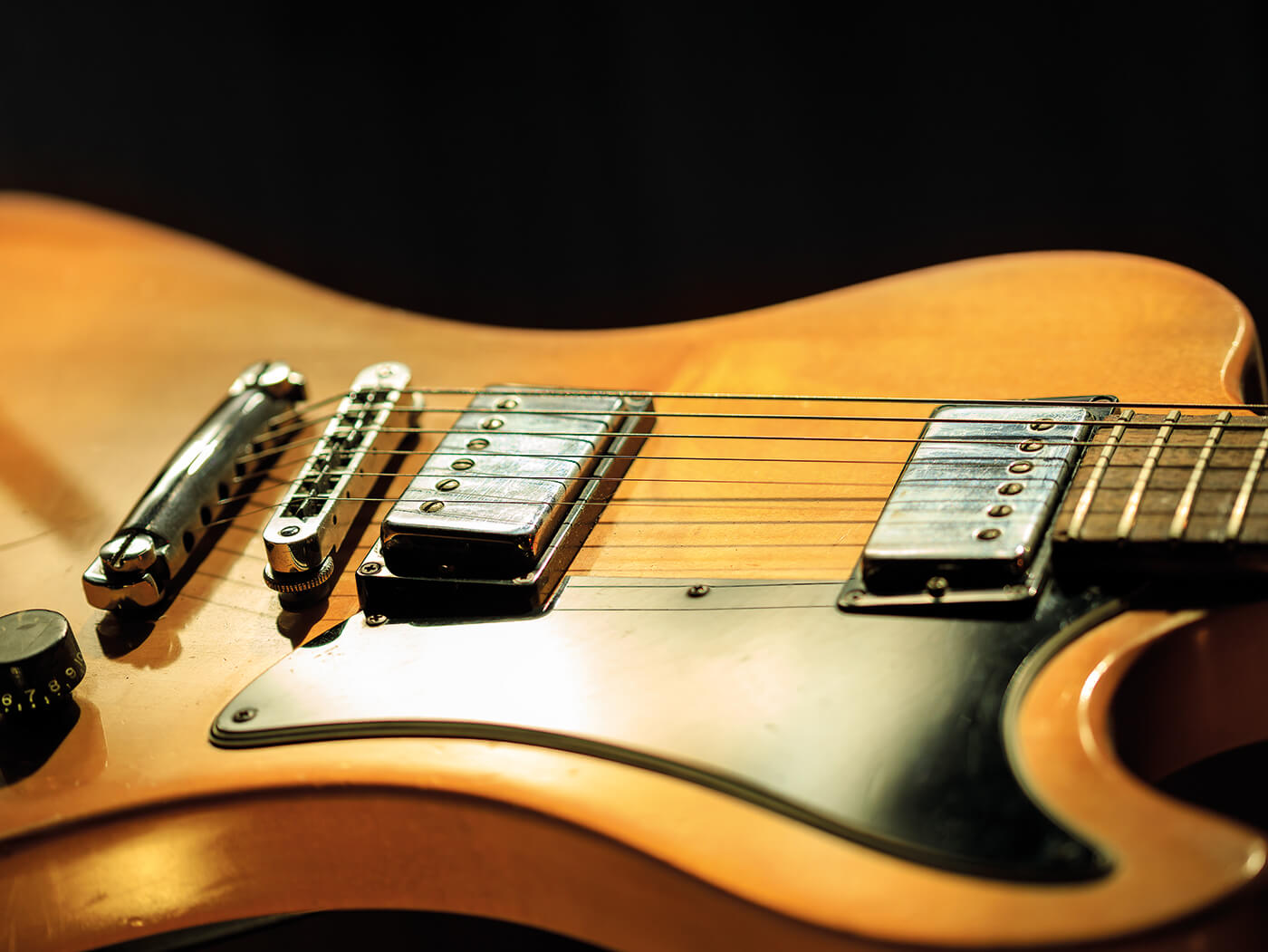 Also residing in Willie’s collection is his 1977 Gibson RD Standard, one of the company’s more leftfield late-70s designs. “I swapped it for a Les Paul Custom, which was probably a very bad deal, but I got the guitar I wanted,” he says. “It’s all-original except for the frets, which I had to replace because they were almost flush with the neck.”

Willie’s collection has a number of recognisable themes running through it. His preference for modification is one; another is his love of Ibanez guitars. This extends from his road-worn RG and pristine floral JEM to the company’s older offerings, beautifully encapsulated in the glorious 1979 AR300 with its Super 80 pickups and their ‘flying fingers’ etching. “I don’t use it anymore,” he explains, “but I keep it, because it looks stunning.”

Equally beguiling is his Studio Twin from the 80s. “It’s a budget twin-neck,” says Willie, “but I’ve kept it for all these years, because I’ve had 12-string Rickenbackers, Danelectros and Yamahas, and nothing records like that 12-string neck. It just chimes like a bell. It’s got Super 70 pickups and even the six-string neck sounds vintage. Even though it’s cheap, it sounds great.” And wouldn’t you know, the Twin has an extra coil-split switch below the 12-string neck pickup.

Another pattern that emerges from Willie’s guitar collection is his fascination for an era of unashamed flamboyance. The 1970s may have been a decade of questionable taste, but it was also a period of unexpected innovation, best illustrated by the Ovation Deacon that was launched in 1972/’73. With a two-octave, 24-fret mahogany neck, the Deacon was designed to be as comfortable to play sitting down as standing up. More importantly, it was rare. “They did them in sunburst, cherry and natural finishes,” Willie recalls. “The only natural one I saw was a 12-string in London. Then, a couple of months later, I saw Noddy Holder playing one on Top Of The Pops. The only sunburst I saw was mine, but I had it refinished in cherry, because the guitar was wrecked when I got it. The tone control didn’t work properly and the preamp had been damaged. Fortunately, a friendhad a working replacement preamp, so I swapped them over and hung it on my wall above a ceramic elephant. One day, it fell off the wall and smashed the preamp and the elephant! The guitar now has the original preamp back in it and is a bit faulty. One day, I’ll get round to repairing it properly.”

The Ovation Deacon is paired with a more familiar early-80s Ovation Legend. “I’ve used this guitar on practically all of my recordings,” says Willie. “It has a pronounced V-shaped neck, and it’s absolutely stunning. Every single note rings, there’s no buzzing. It’s just perfect,” says Willie, who was given the guitar on his 21st birthday. “Sadly, the guitar doesn’t belong to me anymore – I gave it to my daughter for her 21st birthday… But I can borrow it whenever I need it!”