As Paul McCartney’s guitarist, musical director for Etta James, songwriter for Smokey Robinson, solo artist, producer and plenty more besides, Brian Ray has a glittering CV. We visit his Santa Monica home to check out some instruments with a similar level of lustre… 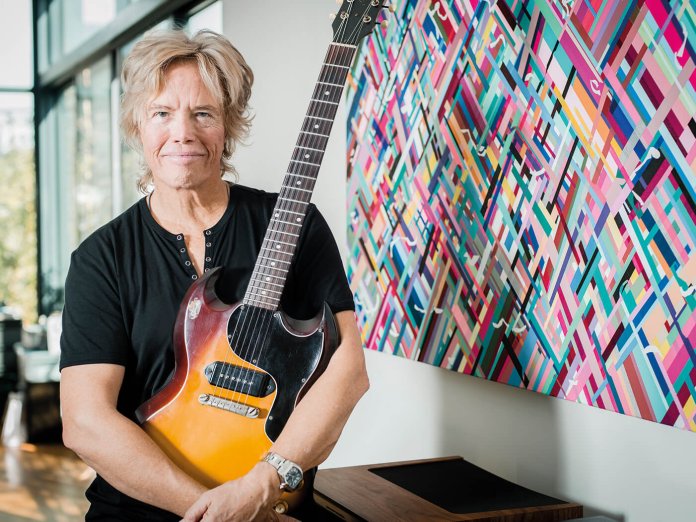 With the noise of the Winter NAMM Show still ringing in our ears, we head 40 or so miles northwest from Orange County up to Santa Monica. Although it’s been overcast all morning, there are signs that the California sunshine is beginning to break through the clouds as we arrive at the home of a guitarist whose guitar collection is as enviable as his regular gig.

Although he’s been a fixture of the Paul McCartney band since 2002 – switching between guitar and bass duties as the set demands – there’s much more to Brian Ray’s career than simply travelling the world and playing some of the greatest songs ever written to enormous audiences.

Back in the early 1970s, an encounter with Etta James would pave the way for 14 years as the R&B icon’s guitarist and musical director. Ray’s other collaborations have included artists as diverse as Johnny Hallyday and Smokey Robinson, alongside a host of star-session appearances, songwriting and production credits. He’s also released two solo albums and an LP with his band The Bayonets.

18,000 Instagram followers (@brianrayguitar) can attest to the fact that Brian is a bona- fide guitar addict. Although his collection includes a 1959 Les Paul Standard and the 1957 Goldtop that he “rode hard and put away wet” at every show with Etta James – not to mention an incredible 1953 Blackguard Tele – we’re here today see some of the rarer instruments in his arsenal.

Brian’s Santa Monica home is something of an architectural triumph, with a large, elevated living space affording views of the ocean and the tall palm trees that line the pavements in this neighborhood. As we sit down to talk guitar, the affable guitarist is clearly excited about his new signature Gibson Custom Shop SG Junior, unveiled at the NAMM Show in Anaheim just a couple of days earlier.

The model features an Ebony Block Vibrola tailpiece and a unique convertible bridge that allows you to quickly bypass the tailpiece and install a wrapover in not much more time than it takes to change a set of strings. There’s also a clever noise-reduction circuit, accessible via a push-push tone control.

It’s all somewhat fitting, as it was an SG Jr – or more correctly, a 1962 Les Paul Jr – that got us here in the first place. In ultra-rare factory sunburst, it’s possibly one of a kind. Brian snapped the guitar up the moment it appeared on the Instagram feed of UK vintage dealer ATB Guitars at the tail end of 2018. Ray plays the ’62 while our portrait shoot takes place and we’re struck by its powerful acoustic voice. “It’s just a tremendous guitar,” he grins. “A stunner. Acoustically, it sounds terrific.”

A coating of tar from its previous life in a smoky environment has been cleaned up by Joel Wilkens of JW Guitar Restoration since we last saw the instrument back in the UK. After doing some sleuth work, Brian is in no doubt as to the finish’s originality, which resembles the sunburst you might find on a Melody Maker from the same era.

“All the solder is factory,” he reveals. “People say: ‘Oh that’s a refinish,’ but why would you refinish a student-model guitar in the first place? Why do you go to all that trouble? How do you get the electronics out to refinish it without unsoldering it? It just doesn’t make sense.”

The unique sunburst guitar is joined here by a wonderful ’65 SG Junior in Pelham Blue and a ’58 TV Junior that made an appearance on US television show Happy Days. There’s clearly something about single-pickup guitars that he likes an awful lot.

“I find that for me, there is no better, cleaner, simpler design in electric guitar than a single-pickup guitar with the pickup in the bridge position,” says Brian. “In the case of Gibsons, without the neck pickup, you have a much longer neck-to-body contact. That gives the resonance through the neck, from the fingerboard down into the body, a lot more play.
‘65 Gibson SG Jr in Pelham Blue
1 of 2

“The other issue is that, as we all know, electric-guitar sound is produced by a magnetic pickup. When you have a pickup in the neck position and sometimes a pickup in the middle, and a pickup in the back position at the bridge, now you’ve got three magnets slowing down or pulling on each one of those strings trying to vibrate. For me, it’s just better to have a single pickup, in a lot of cases.

“I’ve played a lot of TV Juniors and TV Specials, and Les Paul Specials and Juniors of any colour, and I’ve never played a bad Junior. But I’ve played plenty of not-the-best-sounding Les Paul Specials, with the pickup in the neck position. Of course, they changed how close to the neck that pickup rout was, over the years. They learned a little bit later on – they put the pickup farther away from the end of the fingerboard, which was an improvement.”

And it’s not just about physics. Brian agrees that it’s possible to get an extraordinary amount of range from a single-pickup guitar by simply varying your picking-hand attack and position, and alternating between pick and fingers: “You can play with a lot of dynamics, you don’t always need to be biting hard with your right hand. All the great blues players will show you that. The dynamics in the right and left hand are key to an emotional performance.”

Brian’s love affair with guitars and guitar collecting began early on and when it came to guitar stores, he was spoilt for choice in Southern California in the late 1960s. “I think the seed was planted in me when I was first getting infatuated with the guitar as an instrument, as a piece of art,” he recalls. “I used to go down to the music store when I was 12 years old, on the number nine bus, and pay a quarter for that bus ride.

“I’d go down there at 10 in the morning, go and get some French fries and Coca-Cola and do a tour of all the guitar shops in Santa Monica. There was Bay Music, Cunningham Music… eventually, I would end up at the big Ace Music on Santa Monica Boulevard and spend the better part of the day there, just fawning over these guitars and admiring them. They were stacked up to the ceilings!

“You’d have these older guitar players – I was 12, so everyone was older! – coming in there and playing these great guitars. They had a great combination of vintage and rare guitars and new guitars, and the place was chock-full of ’em. And I was infatuated. So for me, collecting came right along with learning how to play the guitar.

‘71 Fender Telecaster in Lilac Lavender
1 of 2

“My first vintage guitar was an early 60s Fender Telecaster, then soon after that I got a 1968 Goldtop Les Paul. Not too long after that, I traded that and got a 1957 Goldtop Les Paul that maybe you’ve seen me play with Etta James and Paul McCartney. But I began collecting as soon as I began playing.”

In 2002, when his drummer friend Abe Laboriel Jr mentioned that Paul McCartney was looking for a guitarist who could also play bass for his live band, Ray ended up getting the gig full-time following a low-key audition in front of 80,000 people at the Super Bowl.
We wonder what kind of mindset shift is required to swap and change between bass and guitar roles during a live performance?

“It was certainly strange at first,” he admits. “I’m a guitar player who plays a bit of bass in Paul McCartney’s band, rather than a bass player who plays a bit of guitar. I’ve played lead guitar and led bands for Etta James and Rita Coolidge and everyone I’ve worked with as a guitar player. Now of course, since Paul has given me this amazing opportunity to play his wonderful, colourful bass parts live on stage – and on record as well, sometimes – I’ve now been called to come and do records for people as a bass player. So I’m super, super grateful for that.

“And yes, it is a bit of a transition. It was much more striking of a transition and a contrast when I first started. Now it’s just part of what I do every single night. I put on a bass, it’s a little lower on my body, it’s got great big strings, there’s only four of ’em and I fulfil a different role in playing under and supporting the band.”

Although what he does every single night is perform songs that are woven into the fabric of popular consciousness, there’s still room to manoeuvre: “For the most part, Paul’s been really generous and fairly liberal with all of us for playing our parts. That said, we all come to this job with a great deal of reverence and respect for the parts that you and I and everyone else on the Earth has grown up loving. These parts, these hooks that are in our bloodstream – the funny thing about all these parts and hooks is that they may have only happened one time, but that was the time they recorded the song that we’ve each heard a million times.

“So, while they are intrinsic to these songs and they are invaluable to the listener, they are also real people playing music in those moments back whenever Paul recorded them. So he allows us a lot of room, and if we go too far, he’ll say: ‘Brian, you might wanna take a listen to the record again, I’m not sure that’s the intro,’ or something like that and you’re like, ‘Oh!’ [laughs] And then you simply go and put on your headphones, you listen, you come back and do it the way he recorded it. But that’s happened so rarely. Literally, three times since I’ve been in the band has he said: ‘I’m not sure that’s how that goes.’

Ultimately, we imagine there’s a great deal of pleasure to be derived from simply standing on stage and replicating some of the most loved guitar and bass parts in pop history. If it ain’t broke…

“Yeah, you don’t wanna add to ’em, or you become the woman who thought she might restore that fresco in that chapel and modernise it a little bit. And then it becomes entirely different and people make memes of it forever. So you don’t wanna do that!”

All things considered, it’s perhaps not a great surprise to see a 1964 Höfner bass on Brian’s wall – albeit a Club model rather than a 500/1. It’s the final instrument that we shoot this afternoon, and Brian’s reason for owning it perhaps reflects why he’s been a first-call player for so many years. As much as he’s a passionate collector with a love for rare instruments, music is first and foremost.

“I really wanted a Höfner bass for recording,” he explains. “It’s a valuable tool, just as having a five-string bass is a valuable tool. Although I’ll never play the five-string that often, I want to have it if someone says: ‘Hey, I need a low B.’ It’s just a matter of having the tools in your tool belt, to be of service to people that ask you to come in and play, or that hire you to play on their records.”

Visit brianray.com to find out more about Brian’s upcoming single on Wicked Cool records, Pirate Radio, and his recent collaboration with Smokey Robinson.