The Collection: Simon White on his love of Les Pauls and vintage instruments

Collector Simon White owns some formidable instruments but the pinnacle is surely the Les Paul Standard used by Keith Richards and Mick Taylor on The Rolling Stones’ legendary 1972 album Exile On Main St.

With an eye-watering guitar and amp collection equally matched by our host’s generous hospitality and the small matter of a 1959 Les Paul Standard used on one of the greatest rock ’n’ roll albums of all time, we wish we could be forced into exile on Simon White’s street. But far from simply being an avid collector of vintage instruments, northerner Simon White’s varied career highlights include being a member of one of the UK’s most unique bands of the 1970s. “I was in a band called Alberto y Lost Trios Paranoias,” he explains. “We used to have a lot of fun onstage, we took the music seriously but didn’t take ourselves seriously at all.”

Indeed, the Manchester outfit were a joyously eccentric group who ruthlessly parodied musical acts of the time, mixing uniquely British comedy with spectacular musical ability often surpassing the acts they were paying jovial ‘tribute’ to, leaving audiences the length of the country equally enthralled, entertained and bemused. During the 1970s they not only opened for Hawkwind but they also topped the bill on numerous tours and were supported by acts such as Blondie, The Stranglers and The Police.

Firm fan favourites alongside other Stiff Records artists such as Ian Dury, Nick Lowe and Elvis Costello on the infamous Stiffs tours of the late 70s, the Albertos even reached number 47 in the UK singles chart in 1978 with their Status Quo spoof Heads Down, No-Nonsense Mindless Boogie. “Unfortunately, we lost Les Prior, one of our vocalists, to leukaemia in 1980 leaving an unfillable void in the band, it was very sad,” remembers Simon. “We eventually went our own ways through musical indifference.”

With the band breaking up in 1982, Simon went on to have a career in film and TV special effects. His impressive credits include Fantastic Mr. Fox, Frankenweenie and a forthcoming Pinocchio remake. However, he always had guitars around, some from his touring days and others heading in and out of his collection as he chopped and changed over the years.

With such a spectacular array of instruments in front of us, it’s hard to know where to begin. “Well, how about this beautiful ES-330 TDN I got a little while back?” Simon suggests. “I had another red one which was lovely, but since seeing Dave Edmunds with his blonde ES-335 years ago, I’ve always kept an eye out for a nice blonde ES series guitar. This one came up at ATB Guitars and I traded in my red one. It’s a spectacular looking and sounding guitar.”

Another blonde that catches our eye is Simon’s 1954 ES-175. “That was in a bit of a state when I got it,”  he admits. “It had a few cracks and the neck P-90 pickup was a clear bobbin, so probably a mid-1960s replacement. It’s a spectacular sounding guitar now that I’ve got it all sorted out. The pickups were out of phase when I got it and I wanted it to stay that way as I just love the middle position. It’s perfect for that Peter Green tone.”

Nestled next to the ES-175 we spot another stunning Gibson. “That’s my 1959 ES-5 Switchmaster” says Simon. “It’s just an incredible sounding thing. Just look at the flame on the back, and the precision of the stinger on the back of the headstock. The craftsmanship back at Gibson in those days was just incredible. I’m also in the middle of sorting out a deal for a blonde ES-5 that might well have belonged to Chet Atkins himself, but that’ll have to wait for another visit as I don’t have it yet!”

Next up is a further pair of impressive ES models. “My 1961 cherry ES-335 TDC has seen some action over the years,” says Simon. “It has a wonderfully slim neck, which I don’t always like on some guitars but that guitar is so beautifully easy to play you don’t notice. The sunburst ES-345 TD is from 1964 and is another lovely instrument. It’s pretty much all original and the Varitone is lots of fun to play with.” 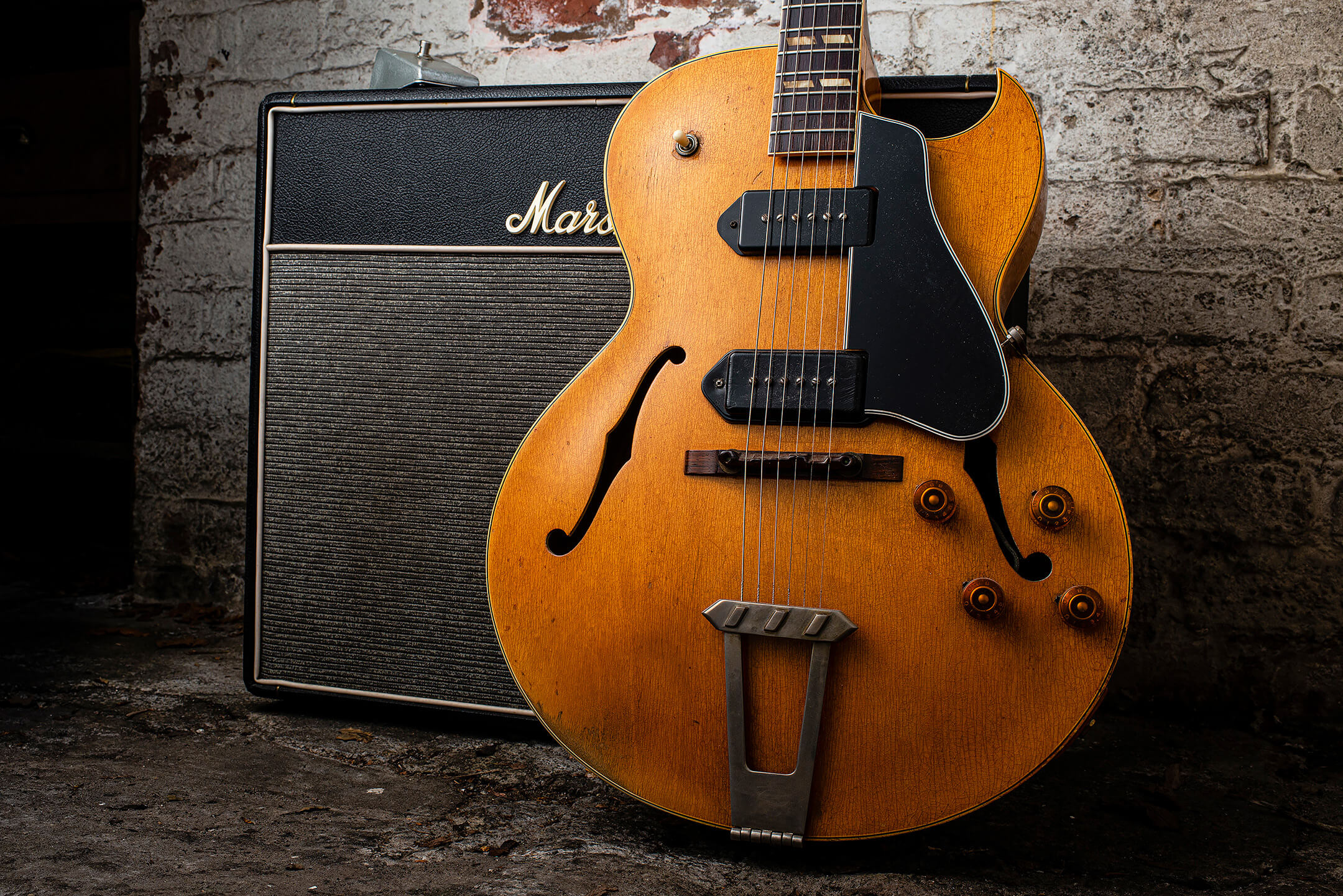 We spend some thoroughly enjoyable time with some of Simon’s other guitars –  notably a gorgeous 1962 Fiesta Red Fender Bass VI, whose deep evocative twang through his 1960s Super Reverb is pure spaghetti-western soundtrack material. Then we turn out attention to a couple of beautiful 1950s Stratocasters.

“This sunburst is from November 1955, the blonde one is from March 1956” notes Simon, placing thee guitars at a significant precipice of 1950s Stratocaster design evolution. “It’s incredible, they are only about six months apart in age, yet are very different in terms of parts and construction. The sunburst has all the early parts, the blonde has the later plastics that would pretty much define Strats into the late 60s.”

Talking of the 1960s Stratocaster development curve, Simon’s other main Strats are both from 1962 and exemplify another significant leap in Stratocaster evolution. “The Sonic Blue one is a refinish that I bought for £60 back in the day,” Simon remembers. “It has a slab ’board and is a February 1962 neck date. The white one is all-original and is a November 1962. That has the veneer board. Again, this pair are only about six months apart, yet are hugely different.”

As we delve deeper into Simon’s collection a pair of brown Lifton cases naturally pique our curiosity. Inside the first is a gorgeous 1956 Goldtop. “I just love the ageing and the way it has gone green on the top” says Simon. As beautiful as that guitar is, opening the second Lifton case reveals a six-string that’s not just the jewel of this collection but an instrument that would likely be the centrepiece of any collection, anywhere: the Exile On Main St. Burst.

Formerly owned by Keith Richards, this 1959 Les Paul was purchased by the Stones legend in 1971 and used by Keith and Mick Taylor both for overdubs on Exile On Main St. during sessions at Sunset Sound in Los Angeles, and on the subsequent tour that followed. As well as appearing in numerous photographs during that heady period, the guitar was also used by Taylor later in the 1970s with other acts, and eventually sold to a guitar shop in London, from which Simon acquired it in the early 1980s.

Simon’s love of Les Pauls goes back a little further, however. “The first time I saw a Les Paul was seeing Peter Green paying in about 1967 at a gig in Southport,” he remembers. “This was before Danny Kirwan joined. It was the very early days of Peter Green’s Fleetwood Mac, they were unbelievably ramshackle but what an incredible sounding band. Probably the best sounding band I’d ever heard.

“Peter was playing his Les Paul through a Vox and something else, and the sound was just magnificent. As a band they were outstanding, they listened to each other and they didn’t play at huge volume. I’d never seen a Les Paul in real life before, and of course that was Greeny. It was still very Cherry then. So, for years I’d always been a fan of Les Pauls and Bursts in particular, and a had always kept an eye out for one…”

As fate would have it, a serendipitous series of unfortunate events led Simon to the Exile Burst. “Someone broke into my flat in London in the early 1980s and stole all of my guitars and gear, apart from one Strat that they clearly didn’t like the look of,” Simon recalls. “Luckily, about the only sensible thing I did in those days was to have my stuff insured!

“I subsequently went down to a shop called Guitar Grapevine which was on Denmark Place, just around the corner from Denmark Street. They had a few lovely guitars, a couple of old Strats and a couple of Bursts. I took a shine to this one and put down a deposit and returned a few days later to buy it, and I’ve had it ever since!

“The manager, a guy called Stuart Sawney, only told me of the guitar’s rather famous prior owners after I’d bought it! I actually got my sunburst ’55 Strat from there about a week later too.”

As guitar-shopping weeks go, that’s about as good as it gets. However, it should be noted that the market for vintage Gibsons and celebrity-owned instruments in those days was nothing like it is now. Perhaps the shop manager felt that this well-used 20-year-old Les Paul that had a fair few parts changed, a hole in the back from an extra strap button and some general wear and tear, was best sold on its own merits rather than artist association.

However, there’s no doubt that this is the real deal. Due to the individuality of the grain and flame of its maple top, along with the way the finishes fade differently over time, each Burst has a unique fingerprint bestowed upon it. “I think the Stones had about three or four Bursts,” Simon notes. “But what shows that this is the Exile Burst is the distinctive dog-leg in the grain here on the top and the very prominent flash of flame between the pickups. Those easily stand out in all the photographs. I only really researched it 10 or 15 years after I got it, and finally dug up all these old photographs of Keith and Mick Taylor using it.”

Simon shows us a folio of treasured photographs, press cuttings and even the Guitar Grapevine store manager’s business card and an old Rolling Stones setlist from the era. Highlights include Keith Richards photographed at Sunset Sound with this very guitar, wearing a long-sleeve Stones logo t-shirt and a thousand-yard stare while lost in the music.

Any encounter with a genuine 1959 Burst is to be treasured but given this guitar’s special place in the annals of rock history, we handle it with extra care. It has clearly had a busy working life. “When these guitars were on the road, they were constantly tweaked and made their best to be road ready,” says Simon.

The beautifully comfortable neck has a classic profile that dissolves into your palm as you play it, and the small heel is typical of a ’59, albeit with a likely neck refinish. The accompanying scratched-in serial number on the back of the headstock includes a decidedly non-factory-spec letter R for good measure – for ‘Richards’, perhaps?

The guitar is loaded with a pair of PAF pickups, one double-white at the bridge and one narrow ‘jazz’ spaced double-black at the neck. Under close inspection we also notice the pickup covers and mounting screws, along with the thumbwheels under the later wired nickel ABR-1 bridge, were originally gold and are now worn down to the nickel beneath.

To focus on these modifications as anything than other than chapters in this remarkable instrument’s story would be churlish – this is an incredibly inspiring instrument and one of the best sounding and playing Bursts we’ve ever had the pleasure to spend time with. And if it was good enough for two Stones at the peak of their powers, who are we to argue?

Not content with its star-studded past, even to this day it seems Simon’s Burst still likes to get up on stage and do what it does best. “Joe Bonamassa played it on stage in Manchester a few years ago,” says Simon. “I’ve got to say he was great and a very thoughtful host. He sorted out backstage passes himself rather than delegate the task to a staff member, it was a great show and he did seem to like the Burst… although he was typically noncommittal!”

63 years after it rolled out of Kalamazoo, it seems there’s plenty of music left in this storied old guitar yet.