Interview: David Crosby – Back To The Garden

As he returns with a brand new album, Sky Trails, legendary singer, songwriter and guitarist David Crosby is still on a worthy musical journey. He explains how he’s rediscovered his joy in music… 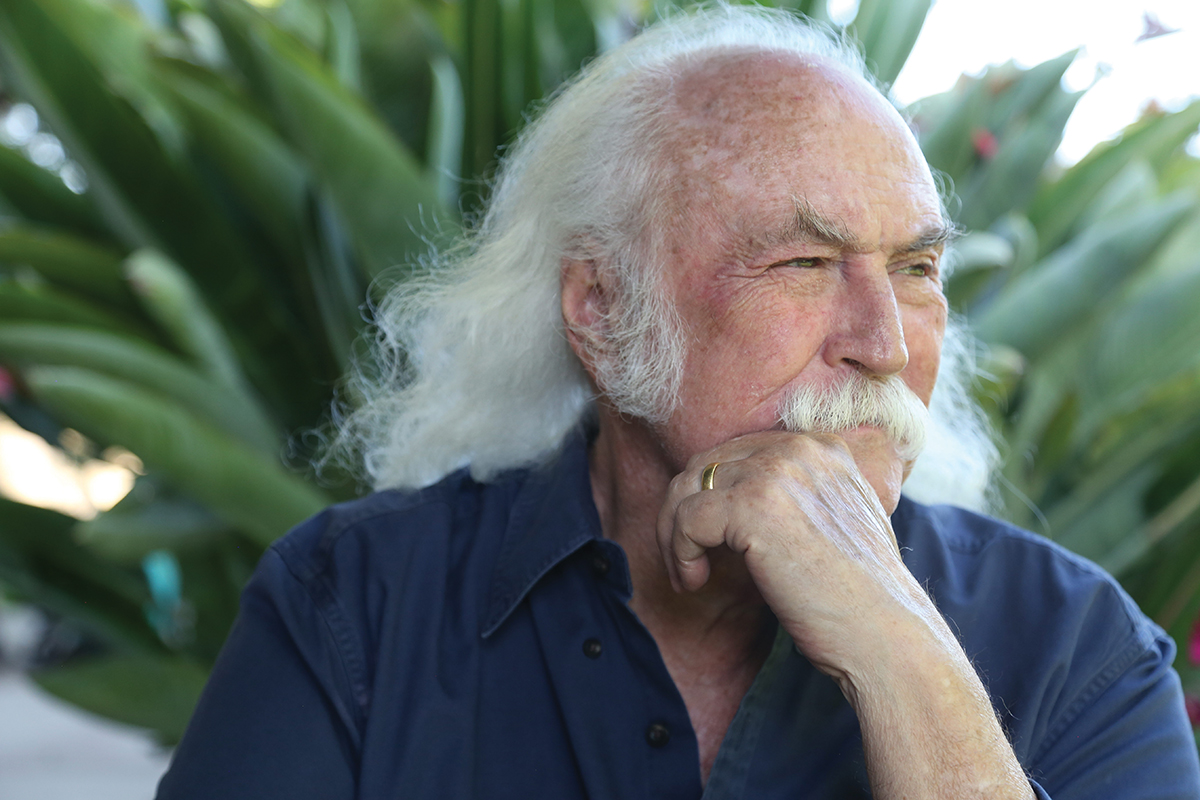 His is an artistry that has permeated not just the wider culture of his homeland and beyond, but also the soul. Yet unlike many of his peers from classic rock’s golden age, Crosby is not content to luxuriate in his past glories, no matter how impressive. Instead he prefers to push forward with new material, his vigorously creative mind always focused on the next thing. Perhaps it’s that drive to keep working that finds him so satisfied – as we begin our conversation, he positively radiates contentment, and is endearingly open and gracious throughout.

Crosby is right to be pleased with himself – his latest album, Sky Trails, has been lauded far and wide, and demonstrates not only his continued evolution as a songwriter, even at the age of 76, but also that his voice hasn’t lost any of its resplendent lustre. Released just 18 months after his previous album, Lighthouse, Sky Trails is dreamily panoramic, ambitious and focused – a testament both to how Crosby has reconnected with his muse following his CSN departure, and to the fruitful songwriting relationship he’s developed with his son, James Raymond.

“I started this as we were still working on Lighthouse, because I’m always writing songs. I can’t stop,” Crosby explains of his prolific recent output. “James is now my main writing partner. The Lighthouse record was a joy to do [together], but then these songs appeared at the same time, and I can’t resist working on songs that happen creatively like that, it’s been a very productive period.”

While the disintegration of Crosby, Stills & Nash was ugly at times, Crosby feels ultimately things worked out for the best. “I think I was a little jammed up creatively towards latter CSN,” he admits. “We grew apart, and it was no longer fun. I need it to be fun! Plus I can’t just keep turning on the slot machine and performing our old hits. That’s not okay.”
One of the tracks on the multi-textured Sky Trails is a cover of Amelia, by his one-time paramour Joni Mitchell – a challenging vocal performance…

“Yes, it’s daunting,” he admits. “I loved that exquisite song for years – ever since she wrote it. She’s the greatest living singer-songwriter and there’s no question about it. As good as Bob [Dylan]. Furthermore, she’s even a much better musician than her songwriting. I’ve wanted to do that song a long time and how she weaves the story of Amelia Earhart within her own love life is so unique, so I took a swing at it and sang it very simply compared to her. The words are spectacular.” 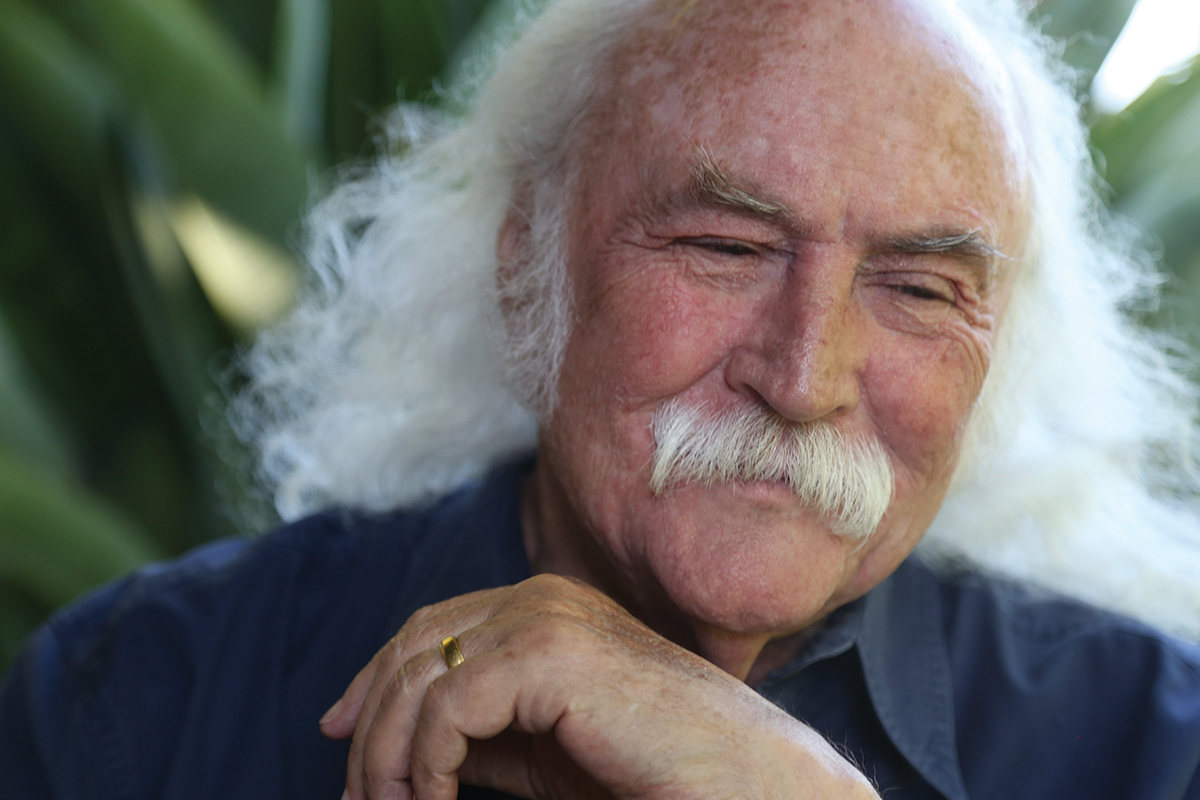 Crosby has written a few decent songs himself in his solo career, however, and perhaps none more so than 1971’s If Only I Could Remember My Name. Even now, he retains a fondness for the evocative pedal-steel used on the track.

“I do love it,” he affirms, “I got [Grammy-winning pedal-steel player] Greg Leisz on board for this album. He’s pretty terrific and as a steel player he’s melodic with a feeling for country, world music, jazz, rock. He has a wider spread than most pedal players do.”

When it comes to songwriting, Crosby doesn’t need to discipline himself to write, as he’s developed a habit that has served him well for a long time now. “I write every day and I save up bits of words in a big book,” he explains. “I learnt that from Joni way back when. She taught me to write good stuff down to save it for songs. That’s brilliant. When I find something I can use in there, it might also spark other lyrics – or a whole verse. For me the words are the hardest part.

I play guitar every night and keep five guitars in different tunings in my bedroom, so I’ll pick one up and start fooling around to see where it goes. If it takes me someplace I’ve never been before, I end up writing a song. I don’t take it for granted, though. It’s hard to come up with decent lyrics if you want to take then across an emotional bridge not of the basic variety. It’s fun, but it’s not easy to do well.”

Crosby’s acoustic playing is indelibly associated with his interesting altered tunings, and as a result he has to have a lot of guitars kicking around the house.
“I play McAlister acoustic guitars, and I have several of them,” he enthuses. “They’re quite possibly one of the best solo makers in the world – stunning guitars. I’ve also got three ’69 Martins that I’ve had since 1969 – D-45s. Two of them I take on the road all the time, so between the Martins and the McAlisters I’m happy. Obviously, I’m not a lead player: I’m a picker. My strength is writing songs in strange tunings. Guinnevere and Déjà Vu, for example.” 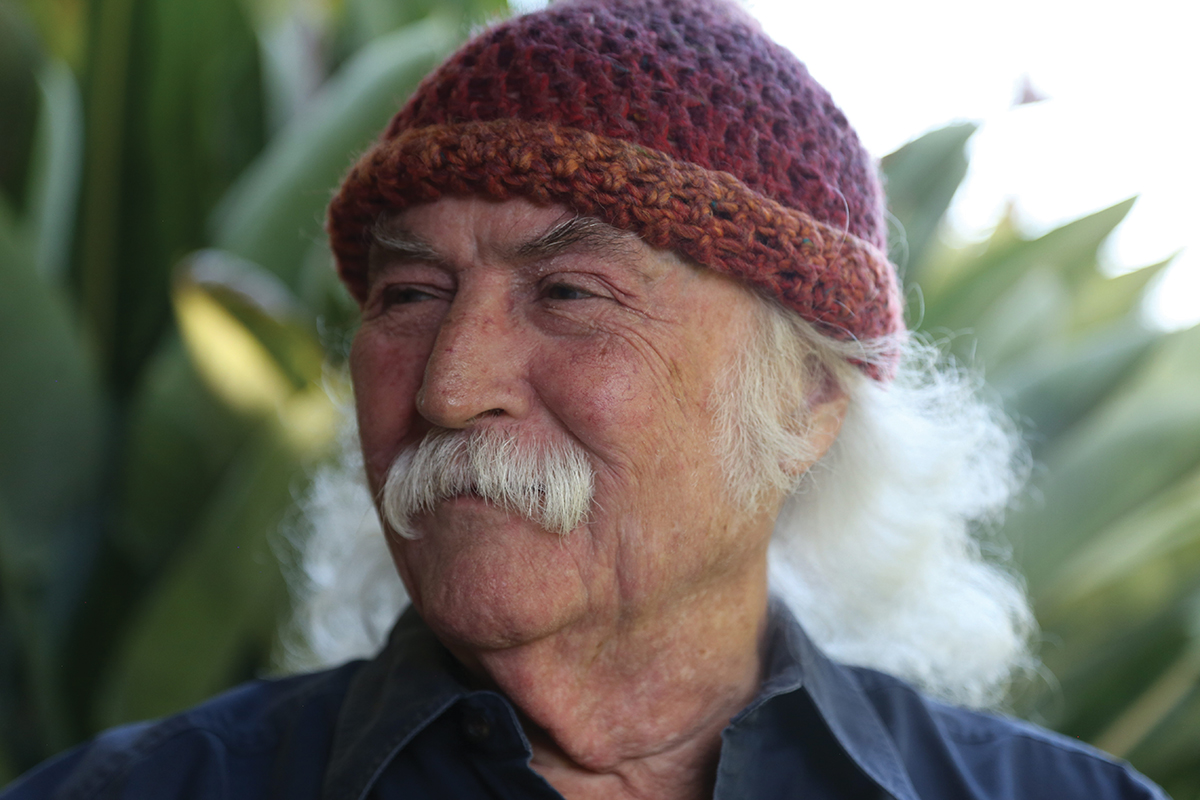 Star On The Right

While he might not consider himself a great lead player, David has worked alongside some pretty stellar electric guitarists in his time – from Roger McGuinn to Neil Young and Stephen Stills – and this has given him a unique perspective on the role…

“Lead players who elevate themselves above the pack are those who grow past the pentatonic blues scale and start playing pure melody,” he insists. “Beck, Gilmour, Clapton, Hendrix and Hedges: they could play anything they dream up because there’s no distance between fingertips and brain. They can play anything they desire. That’s where the rubber meets the road – the guitarists who are forever legends.”

It’s not just lead guitar players either: Crosby has played with some amazing musicians of every stripe over his long career, but there’s one that stands out for him – the late, great Michael Hedges. “Oh god I loved that,” he enthuses. “I think that he’s the best acoustic player I ever heard in my life, anywhere.”

These days, Crosby’s appetite for collaboration is unquenched, and he enjoys working with players who you might not expect him to work with, such as Michael League of fusion jam-band, Snarky Puppy, who contributed to the Lighthouse album. “It was inspiring,” Crosby recalls. “Michael is an amazing guy as well as a musician. It’s as though you have your palette of five colours to paint with and with another songwriter you then have at least double that.

“I know people who won’t collaborate because they can’t mesh with others or they want all the credit. But I love it. I’m picky as hell, but I found people so good I can’t resist it. I like the process.” 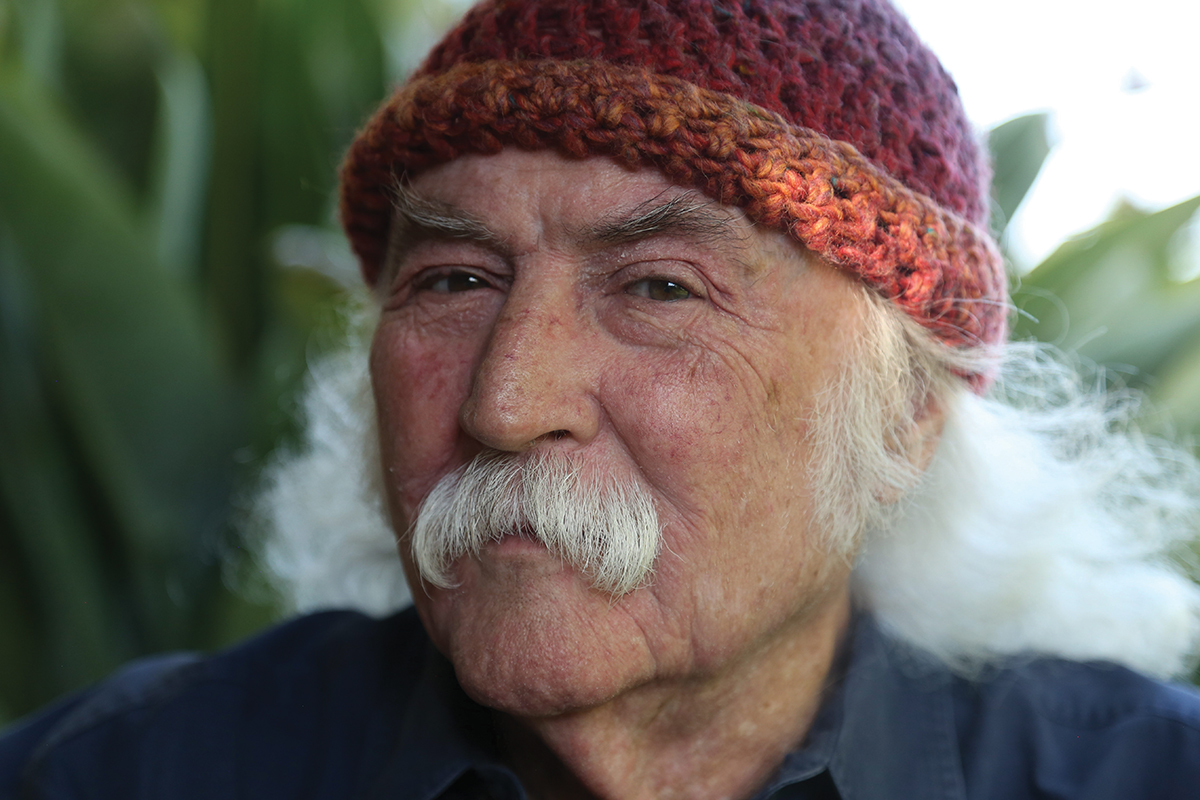 Another artist that Crosby has enjoyed an enjoyable relationship with is jazzer Michael McDonald, who co-wrote the track Before Tomorrow Falls On Love from Sky Trails.
“I had a set of words and went to Michael and he added some beautiful words and music to it,” Crosby explains. “It’s a jazz ballad. And he wrote stuff I’d never have been able to write. He’s a craftsman who likes to work on a song. He lives nearby so I’d go over to his house, he’d come to mine to work on my piano. What a really great musician. That’s my son on piano playing the parts Michael wrote.”

Raymond’s impact on the album is more than just some nifty piano work, however. Crosby admits that James drew music out of him that he would never have expected, and the song Curved Air is a prime example. “That song is a true story about a guy who got blown up in Afghanistan,” Crosby elaborates. “It’s a strange song, and James decided he wanted to take it to the flamenco space but he did that on a keyboard, so it’s a guitar sample on a keyboard.”

The topic of the song is a deeply serious and affecting one, and something that clearly resonates with Crosby as he looks back on his long and eventful life.
“War is a downward force on the human race that brings out the very worst in humanity,” he reflects. “Music is an uplifting force and brings out the best in us. So playing music is a good deed. What the Jews call ‘mitzveh’ and that thrills me to no end.”