What’s even more rock ’n’ roll than a Les Paul-shaped swimming pool? The real thing, of course. We head to Palm Springs to catch up with Brian Ray and find out about the 1957 Goldtop he played with Etta James and Paul McCartney.

Back in 2019, with the sounds of the NAMM show still ringing in our tired ears, we visited Brian Ray at his home in Santa Monica to check out some of the highlights of his outstanding guitar collection. But one instrument was missing that day, and it was a big one – the battle-scarred 1957 Goldtop he “rode hard and put away wet” at every show during the 14 or so years he spent as bandleader for Etta James.

It’s not like we need much of an excuse to check out an original 1950s Goldtop but when it’s a guitar as storied as Brian’s, it’s surely worth another trip. Fast forward 12 months to January 2020 and we find ourselves 100 miles east of LA at the guitarist’s desert hideaway in Palm Springs. Bad sunsets don’t seem to exist around here and, as the mountains framing the Coachella Valley begin to turn pink, it’s impossible not to be charmed by the surroundings.

Sat beside his Les Paul-shaped infinity pool – you may have seen it on a recent Gibson TV show hosted by Mark Agnesi – Brian winds the clock back to a time when a PAF-loaded Lester didn’t cost the same as a modest house. 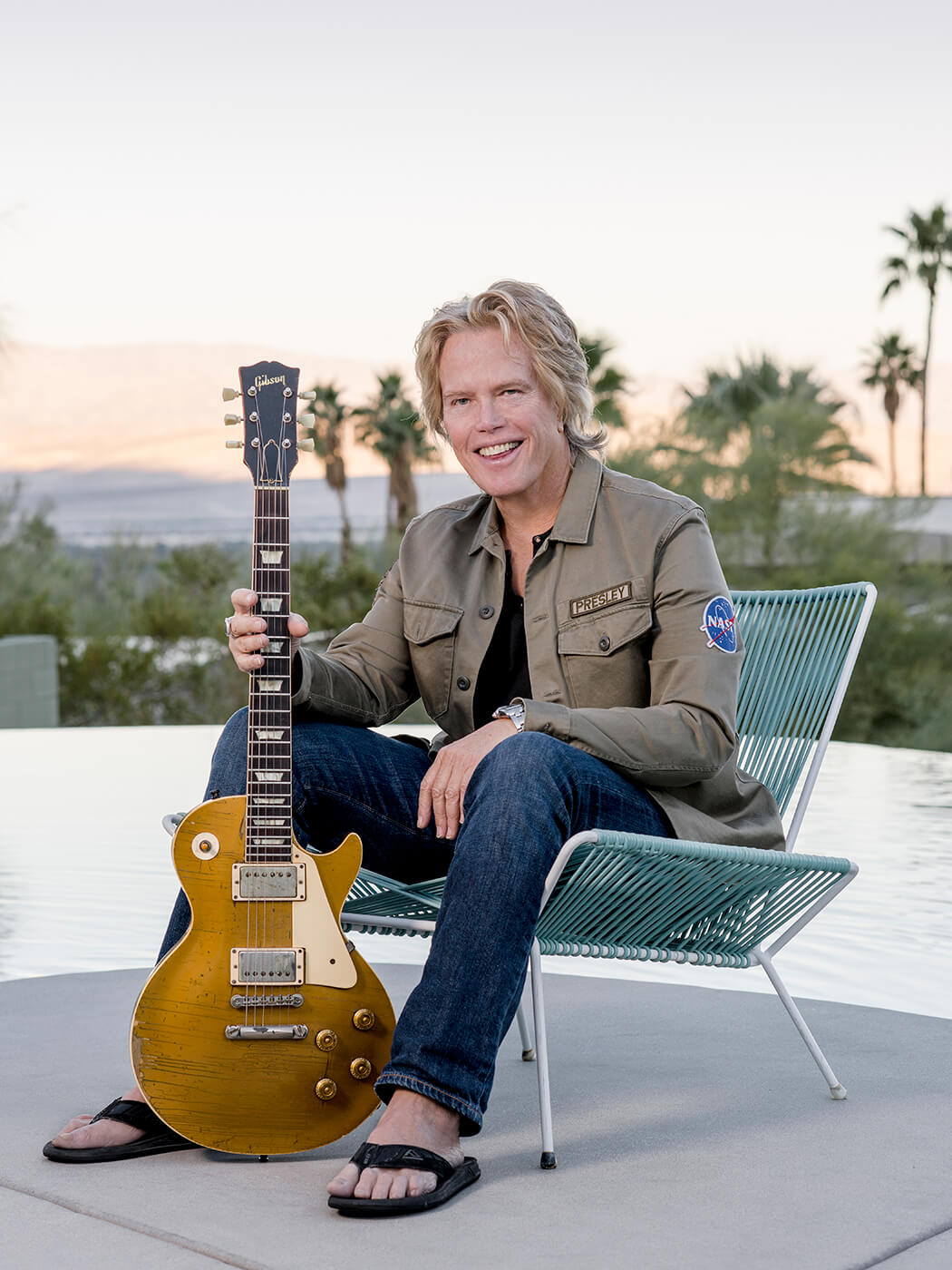 “I purchased the guitar in 1973 from my half-sister’s boyfriend, a guy named Chris,” he recalls. “He’d bought it in New York at Manny’s or possibly We Buy Guitars, which was right next to Manny’s. I learnt that he’d paid $550 for it and sold it to me at a handsome profit, for $850. By then, a flametop was going for a thousand dollars. But $850 in 1973 would be three months’ rent. That’s kind of how it was back then. It was a lot of money to spend on a guitar but it was my one-and-only for the longest time.

“I played it with Etta James on every single sweaty little gig we had, from Downtown LA and Watts to the Montreux Jazz Festival in Switzerland. It was my main guitar for all of those years and remains my number-one. If I only had one guitar, this would be the one.”

An emphatic “exactly!” is Brian’s response when we ask if that makes it the guitar he’d save from a burning building. But for a man whose staggering collection includes an original Burst, it’s a tough call. “When you have a ’59 as well, it’s hard to say that,” he says. “I’d see if I could take ’em both! But the Goldtop would be the one.”

When Brian first bought this guitar, its pickups had had the covers removed and were not the originals, but they “sounded great” all the same. “I used them for a long time and I think I probably sweated through one of the windings or something,” he says. “In the mid-80s, I decided I was gonna go about restoring this. I knew that the parts were getting more and more rare. Now it’s an almost insurmountable task to restore all the screws, wires, pickups, plastic bits, tune-o-matic and all that stuff.

“As with many players at that time, we were just looking to have tools that worked well. We didn’t really care about originality in the 1970s. Now, of course, we do. In about 1987, I went about collecting all the parts for it, looking in The Recycler, talking to my guys in guitar shops across the planet, getting this part and that part. I collected them all and brought them to a guy named Steve Soest in Orange County – a well-known repairman, one of the old guard – and he put ’em all together.”

It’s impossible to argue with the results – this is one of the coolest Goldtops we’ve ever handled, and combined with decades of play-wear, the neck has that spectacular soft-shouldered 1950s carve you encounter so rarely on even the finest reissues. Yet Brian’s bond with this guitar goes deeper than the way it feels or sounds.

“That’s the guitar that was expressing my inner feelings at a time, as a teenager, when I didn’t have the words for them,” he says. “It was my best friend. I literally slept next to it for many months, I was so in love with it. It cried for me, it laughed with me, it screamed and it talked. It was really my buddy, and still is.”

Although Brian’s ’57 Goldtop was used with Paul McCartney on numerous occasions, it’s been retired from the stage for a while, with a Rick Nielsen signature model taking its place whenever a Les Paul is required. One of the Goldtop’s final live outings was a memorable one, but it could have ended in disaster.

“The risk of having it out there and the possibility of it getting broken or damaged was too great for me to bear,” says Brian. “One of the last times I used it with Paul was on the 2012 Grammy show, with Joe Walsh, Dave Grohl, Bruce Springsteen, Paul, Rusty [Anderson] and I all doing the guitar jam at the end of The End.

“We were rehearsing for it, and I looked across the stage and there it was, in the dark, on a single guitar stand with nobody around. I just thought to myself, ‘What the hell is going on here?’ And I went and grabbed it and put it next to the amp and kind of gave my guitar tech a little bit of a bollocking. He said, ‘I thought it would be safe there out of traffic’ and I’m like, ‘In the dark?!’ Anyway that was it for me, that was when I decided to keep her at home.”

Although it’s now safely tucked away, the Goldtop survived some pretty wild nights on the road – there’s even a gouge around the back that was repaired with bubblegum. Etta James and her band toured with The Rolling Stones between 1978 and 1980, and the Les Paul went along for the ride. During a period Brian describes as an “amazing time”, the Stones were promoting their Some Girls and Emotional Rescue LPs in venues ranging in size from intimate theatres to 55,000-seaters such as Anaheim Stadium.

“It was just like, oh my god, I’ve died and gone to heaven to be on this fucking stage with these guys,” says Brian. Among his souvenirs from the period is a black and white photograph of Keith Richards playing the ’57 Goldtop with Etta James. 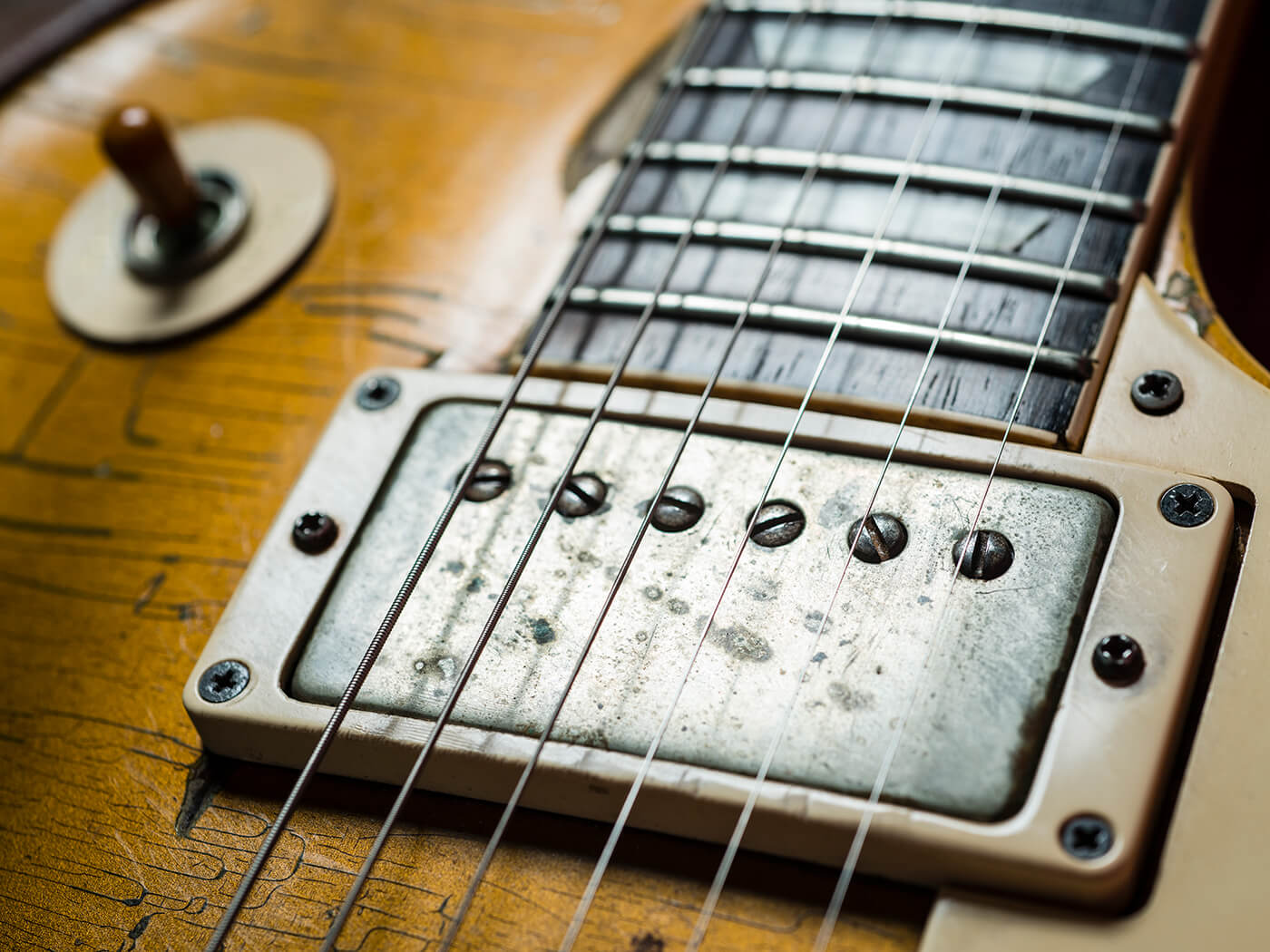 “Although I was still getting loaded, the memory of that night is pretty specific – things like that start to clarify your memories,” says Brian, with a laugh.

“When Keith was in the crowd, Etta would give me a look that would mean she was gonna invite him up. And he graciously accepted and would come up, I’d hand him my guitar, set the amp and go and watch. I was right in front of him when that shot was taken. They played Rock Me Baby and You Got Me Runnin’. They played two great blues songs and Keith just ripped and had a great time. He did this a handful of times. He loved Etta, she loved him. They were very close. They even had a mock wedding backstage that they presided over themselves!”

Our conversation with Brian soon veers off on a musical mystery tour that takes in (I Can’t Get No) Satisfaction, the formative influence of pianist Johnnie Johnson on Chuck Berry’s guitar playing and the huge contribution of horn players to the evolution of the guitar riff.

It’s time to return the guitar to its case – which features a sticker from 1970s US TV show The Midnight Special, on which Brian performed with Etta James – but before we head off into the neon-lit Palm Springs night, he has a couple of other interesting guitars to show us. Stay tuned for more on those in a future issue.