What strings should you be using? ​

Have you been using the same strings for years? We’d encourage you to think outside of the rust-proof box 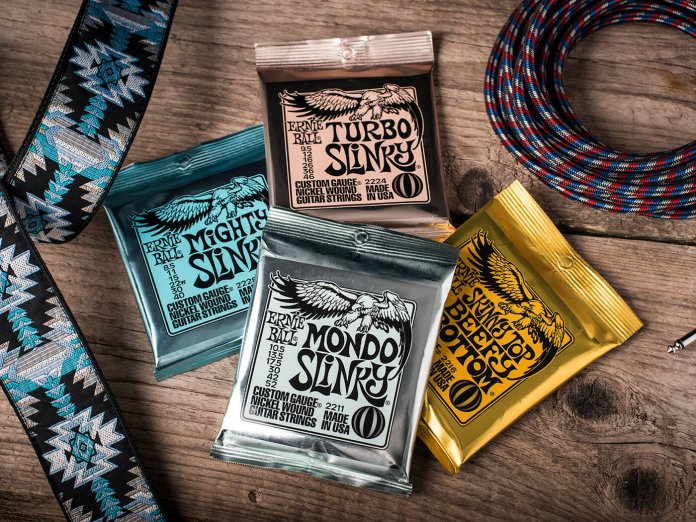 What strings do you use? It’s a common enough question guitar players ask one another, but also one of the most divisive, as a tranche of recent online debate and outright disagreement has evidenced.

It’s an area of guitardom where individual taste crashes most spectacularly with accepted wisdom, it is the recurring koan: Are you using the right strings?

The guitar offers a lifetime of mysteries to players of all levels and ages. The joy of finding answers to each milestone question along the way is that those answers are often a matter of personal taste. This is a good thing. As our individual experience and musical directions change, so too do our preferences in all aspects of the instrument.

But be honest, when was the last time you seriously appraised your string choice? The guitar string world has exploded both in terms of technology and choice in recent years, with brands such as Ernie Ball now offering a huge range that’s tailored to these very diverse and personal tastes – such as the Turbo Slinky, Skinny Top Beefy Bottom Slinky, Mondo and Mighty Slinky strings that offer half-gauges and variations that cater to those who don’t quite vibe with the more traditional options.

We all tend to stick to what works, but with so much choice now available, isn’t it time that you took another look at what you use and consider the wealth of options out there?

Looking at, and debunking some examples of prevailing beliefs that have permeated the culture can help when it comes to making an informed choice, so read on and find out if you’re using the right strings for what you want, or if you need to swap your wires…

Here’s a little slice of misinformation that owes as much to machismo as it does to anecdote. Stringing your strat with undersea cables has to mean huge tone – surely if Stevie Ray Vaughan would rather superglue his callouses back onto his fingertips than compromise with lighter gauge strings then there has to be something in it, right?

It’s a little more complicated than that, as many players who have strangled their Strats with 13s can attest. While heavy gauge strings may offer a thicker, fuller tone, their application on an instrument with a standard scale length can make expressive bends and vibrato difficult or even dangerous with an increased risk of causing RSI, impinged ulnar nerves and carpal tunnel syndrome in the long term. It’s possibly worth pointing out that once SRV had kicked his heroin habit, his choice of strings also lightened up.

While heavy strings can mean more mass vibrating over the polepiece of your pickup, a very similar effect can be gained with the use of strings with a thicker core that don’t demand an inordinate amount of tension across the fretboard.

Ergonomics aside, there are often tonal benefits (or at least differences) and If you’re using anything north of 11s on a standard Fender scale instrument we’d encourage you to go lower, no even lower than that! How about 8’s?

Before you start wondering if we’ve gone entirely Yngwie, hear us out. Light strings, and actual gauge 8s have been a vital part of the sound of guitar heroes including Chuck Berry, Jimmy Page and BB King.

They do take some getting used to, as we find when applying them to a Gretsch White Falcon (25.5” scale) in the name of science. To begin with, our bends and even barre chords are pulled sharp in our enthusiasm but there is no arguing with the sound. Perhaps surprisingly there is very little discernible compromise in girth or impact in either clean or filth-based applications. Instead there is a noticeable sense of clarity, space and lightness across all pickup positions – even with the mud switch engaged!

As we peel off the 10s on a Supro Belmont reissue and apply a silvery set of 8’s to the 24.75” blues machine, we are particularly impressed with the snarl coming through the Vistatone single coil pickup. There is a little fret buzz coming through the amp that suggests a set-up might be in order if we intend to keep the guitar like this – the lighter bass strings in particular do move more when strummed hard and as such it would be handy karma to dial some relief into the neck to allow for this.

Through laudable dedication to experimentation, many players have discovered that custom gauge combinations offer the best of both worlds. Hybrid string sets are becoming increasingly popular with acoustic and electric guitarists who welcome the opportunity to really dial in their preferences of both tone and feel.

Bluegrass acoustic guitarists have long enjoyed the muscular bass response of a .56 on the 6th string but now more common than ever is the application of lighter treble strings which makes it much easier to work an expressive vibrato into your super-fast G-runs. This same approach is now commonplace with electric guitarists too with many companies offering variations on the skinny top/heavy bottom theme which have found favour with players like Kirk Hammett and Jeff Beck amongst others.

Less popular amongst electric players but increasingly common in the alternate tuning acoustic fingerstyle world is the use of heavy plain strings especially when dropping to tunings like DADGAD. Even in standard tuning luthiers such as Jason Kostal suggest a .13 and .17 in place of the plain steel strings in a standard set of 12s. The most likely application of this approach in the electric world is with jazz players who depend on thick tone and an immediate response in the treble section, especially when paired with flat wound strings.

While it can be tempting to assign great tonal import to string gauge choice, it is also worth bearing in mind that the guitar is more than the sum of its parts and measurements. This being the case, factors such as scale length, nut material, tuning pitch (ignore everything we said about 8s if you tune to B…) the kind of pickups you have on your guitar (and the strength of the magnets therein) as well as their placement along the string’s speaking length, the density, weight and texture of your pick (or nails or fingerpicks or just bare fingers), and your picking hand’s positioning, strength and accuracy all combine to make up your personal sound.

If string experimentation sounds like your sort of thing then we’d recommend checking out the latest offerings from Ernie Ball who have added four new custom gauge combinations to their world-famous Slinky line. All sets feature nickel-plated steel wrap wire around a tin-plated hex core. Check out the new options below!

Visit ernieball.co.uk/guitar-strings for more information. And win yourself four sets of Ernie Ball strings, a guitar strap, two patch cables and a selection of stickers here!