A band that aren’t known for side-stepping taboos and are more than happy to challenge social conventions, Estrons are making waves with their new brand of female-fronted, catchy and aggressive rock music. Guitarist Rhodri Daniel tells all to Sam Roberts…

When we talk to Rhodri Daniel about his musical beginnings, it’s surprising to hear of his early disinterest in the guitar, given the whirlwind year his band, Estrons, have just had. “My mother pestered me for years to pick up an instrument. I resisted as I was always more interested in climbing mountains and jumping into rivers,” he declares.

His interest was eventually piqued, however, through the need to better his closest rival – his cousin – rather than any great urge to follow in the footsteps of his musical idols. “One day when I was 11, my cousin comes round and brings his new acoustic guitar to show me what he could do… I wasn’t going to be outdone by that little punk! So I picked up my mum’s battered old classical guitar and we battled it out.”

Despite Rhodri’s initial interest coming more from competitiveness than a passion for music, he’d caught the bug, and he began playing in Welsh language bands in no short order. “At the age of 14, my friends and I toured Wales in Welsh language bands,” he recalls. “It was incredible fun and we got up to no good for years. Eventually we wanted to capture it on record… it sounded so awful that I contemplated never doing it again!”

Following some time spent away from the music industry while studying and travelling, Rhodri, along with vocalist Taliesyn KällstrÖm, has returned to what he knows best – rock music.

Estrons formed through a chance encounter in Cardiff, with Rhodri quickly inviting Taliesyn to listen to demos he’d recorded after bonding over similar tastes in music. “I met this stranger, called Taliesyn Källström, who had the coolest name I’d ever heard. She had great taste in music, so I invited her to listen to some demos. With some trepidation she came to this derelict musical commune I was living in at the time to share ideas, and luckily for me she could actually sing as well.”

With their debut album You Say I’m Too Much, I Say You’re Not Enough due out in October, Estrons distinct rock influences are already apparent on their singles Lilac and Drop. The former is a fascinating mashupthat sounds like political punk legends the Dead Kennedys had a jam session with Wolf Alice. The latter, however, was written in jail…

“Drop was written by Tali from a jail cell, so it’s pretty angry, but you’ll have to ask her about that,” Rhodri admits. “Lilac was written when I was in a particularly agitated mood, hence why the music is constantly shifting and aggressive. Tali heard it and wrote the lyrics immediately inspired by an encounter she had just had with a crying teenage girl in the early hours of the morning.” 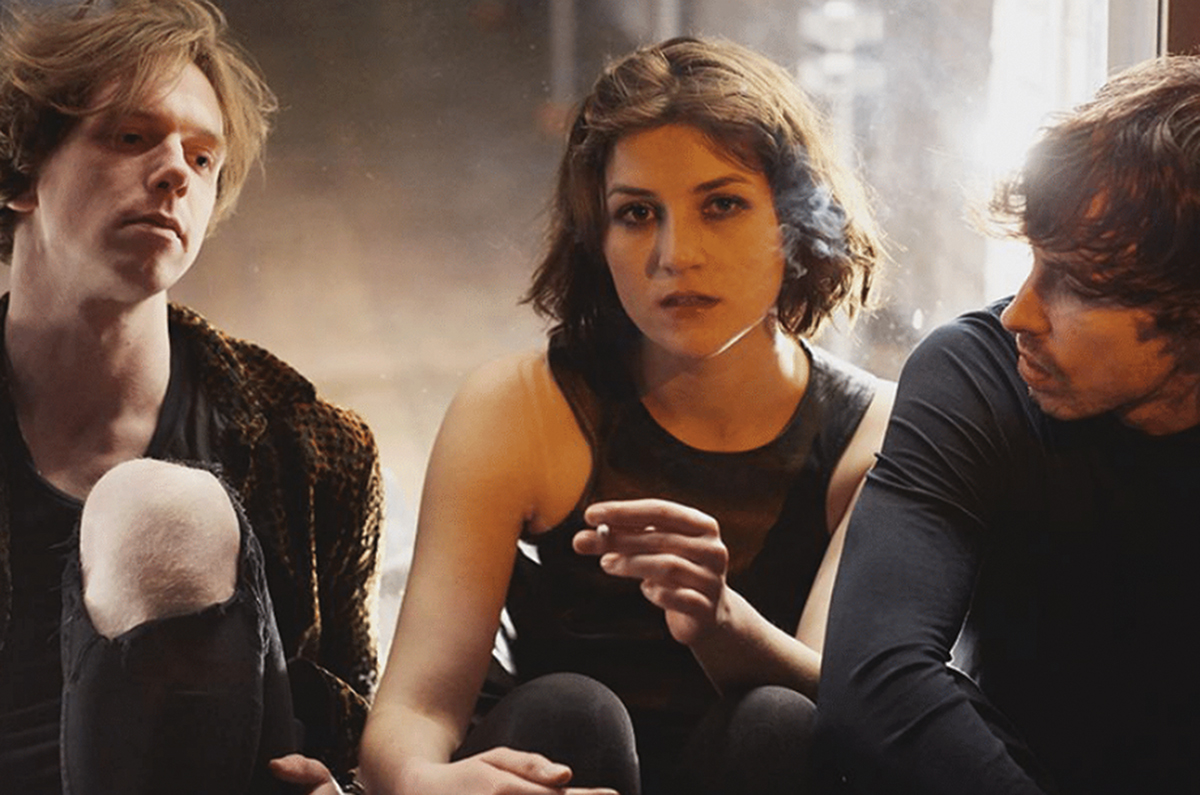 Estrons’ considered and contemporary sound didn’t arrive overnight though. Taliesyn and Rhodri’s musical differences caused more than their fair share of constructive arguments, alongside relentless touring schedules over several years – including a stint supporting Slaves – and a turnaround of no less than 12 band members.

Most bands wouldn’t have lasted through those tumultuous years, but Estrons seem to have come out stronger, not least because of an early belief in what they set out to achieve. “The ‘sound’ hasn’t truly changed since the beginning, we decided there and then that was the sound, and we knew what we were doing. What has changed is the songs,” he reflects. “We’ve matured and the songs and lyrics are harder hitting now as it’s been pretty tough at times, but now we have the songs to make it worthwhile.”

I Predict A Riot

Estrons are now settled in both line-up and compositional approach, and with support slots alongside Garbage and political activists/punk band Pussy Riot already in the bag, their September tour, which sees them visiting Europe for the first time, is building up to be one of the most hotly anticipated rock tours of the year.

Despite playing alongside bands that are steeped in cultural activism, however, Rhodri doesn’t believe that it’s something Estrons purposely aim to address themselves. “We don’t particularly set out to address certain socio-political themes in our songs, but we inevitably always do, these things are happening to Tali and she is giving her own opinions and experiences of them through her music.”

With the album tour running up until and into 2019, Cardiff’s next great rock exports show no sign of slowing down, with album number two already in the pipeline. “We’re writing the second album now, it’s nine tenths done so far!” he enthuses.

“To be honest we’re just going to keep doing what we’re doing and exploring the sound. If people want to turn up to our gigs and hear it, great. If not, no worries!”

Estrons may mean strangers in Welsh, but soon they’ll be anything but alien to those keeping a keen eye on the British rock landscape.

You Say I’m Too Much, I Say You’re Not Enough is out 5 October on Gofod Records.