From guitar giants like Fender to up-and-coming boutique brands from China, these are our top highlights from Music China 2019. 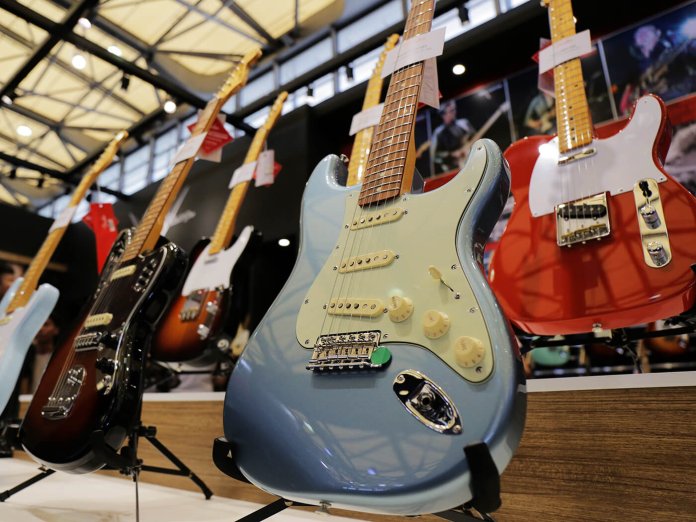 Over four days of the trade show, over a hundred thousand visitors – ranging from buyers and manufacturers to pro musicians and hobbyists – descended upon the Shanghai New International Expo Center to check out the best of what the world’s renowned brands have to offer. Whether it’s saxophones, pianos, DJ turntables or, yes, guitars, the Chinese are hungry to plug in and rock out.

And it’s no surprise that so many brands from the West are flocking to Music China. The nation has eclipsed the US as the largest economy by PPP, and with a rapidly growing middle class, China is primed to be one of the world’s biggest buyers – in addition to producers – of musical instruments.

The numbers speak for themselves. Where Winter NAMM attracted 115,000 registered guests, Music China 2019 boasted 170,000 attendees. And where the NAMM show floor occupied almost 60,000 sq m, Music China sprawled out across 145,000 sq m. Attendees had to hop on shuttle buses to get from one wing of the venue to another.

However, unlike NAMM, Music China is not the epicentre of new gear launches. Most of the booths at the latter were set up by the local distributors rather than the brands themselves. So the primary objective of the exhibitors was to move existing products rather than to promote upcoming ones.

All that said, we came, we saw and we snapped away – these are our highlights from all four days in Shanghai.

Represented by Guangzhou FAST Musical Instrument, Fender and the Fender Custom Shop drew a throng of people. While the new Vintera range and the American Acoustasonic Telecaster led the line, it was clear from the Dream Factory guitars on display that relic’d Strats and Teles are huge in China.

Taylor was one of the few big brands that represented itself – even Andy Powers was there for a meet-and-greet session.

The acoustic guitar was a popular choice at the show, with one hall almost entirely devoted to the instrument. So, unsurprisingly, Taylor’s booth was packed with attendees auditioning everything from the Builder’s Edition models to the more traditional OMs.

The pair didn’t just share a space at the show – they announced a full partnership. As a Chinese brand known for its craftsmanship, Eastman linking up with a master luthier such as Dana Bourgeois seems to be a match made in guitar heaven.

In addition to the ornate Bourgeois acoustics, we saw the new thinline Eastman Romeo as well as the Double Top acoustics.

The Heritage Standard and Artisan Aged models were on full display at Music China 2019. As US-made guitars with pedigree, these instruments were one of the more popular electrics at the show – this despite the booth being far smaller than the other American manufacturers’.

Teisco made an appearance alongside Heritage, presenting its three pedals – the Boost, Fuzz and Delay – to those with an ear for more experimental tones.

Hailing from Malaysia, Jeffrey Yong is a master luthier who specialises in building acoustic guitars from exotic and regional tonewoods.

In a giant pink cube parked in the middle of a hall, the distributor for these brands – GuitarCube – set up shop. The largest space was dedicated to these four brands, with Gretsch’s hollowbodies and Jackson’s metal axes hanging from floor to ceiling.

We found some of the most high-end gear in the show within the cube: Suhr, Friedman, Milkman and Strymon, among others, all of which are distributed by GuitarCube.

ALP also prides itself in using patented designs – such as the headless construction and bridges – and quality parts. Which is another burgeoning trend we noticed at the show: that Chinese brands are steering well away from the poorly made ‘copycat’ designs that they tend to be historically associated with.

Gervana is a boutique effects brand whose focus on all-original circuitry and handmade construction is yet more evidence of the abovementioned trend.

This brand was founded in the US in 2013 but is now headquartered in Guangzhou, China. Its line of guitars and ukuleles are broadly split into two categories: wood and carbon fibre.

But it’s in the latter that LAVA’s ingenuity shines. The company actually fabricated its own carbon fibre composite material, dubbed “AirSonic”, that it claims to be weatherproof, 30 per cent lighter than regular carbon fibre, and suitable for the injection-moulding process used to create the instruments’ unibodies.

Gibson’s presence at Music China 2019 was significant in one major way: it’s the first time in a decade that a top executive – in this case CEO James ‘JC’ Curleigh – from the Nashville company journeyed to the trade show.

“We recognise that there is an opportunity to bring our renewed Gibson momentum to the Asian market to drive future growth,” he explained in a statement. And the same could be said for all the brands at the show.