Based in Birmingham, UK, this reader shares his fondness for big, robust sounds. 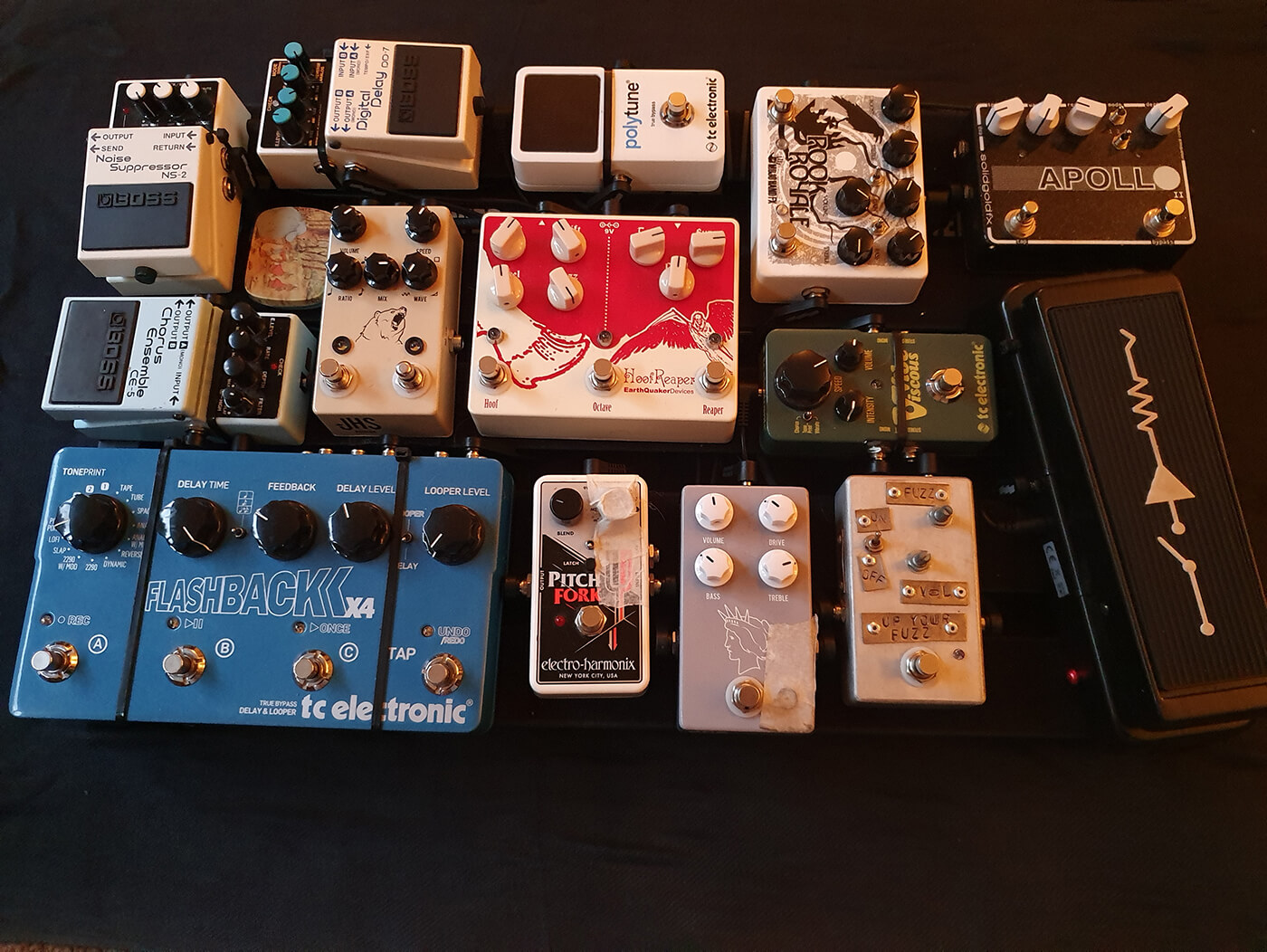 Hi Liam! Tell us about yourself as a guitarist.

I’m Liam Jeffery, 23, from Birmingham. I first started playing guitar seriously at around the age of 11 when I started secondary school, learning blues licks and a lot of Led Zeppelin and Black Sabbath riffs.

I have been playing now for around 12 years and have been in and out of quite a few bands over the years. I currently play in a band named Underground Empire (soon to be renamed and rebooted under the moniker Sweetheart Grips). We gig fairly regularly around our hometown and have played numerous gigs outside of Birmingham. Our sound incorporates many different influences from Queens Of The Stone Age, Led Zeppelin, Stevie Nicks, Jack White and more. 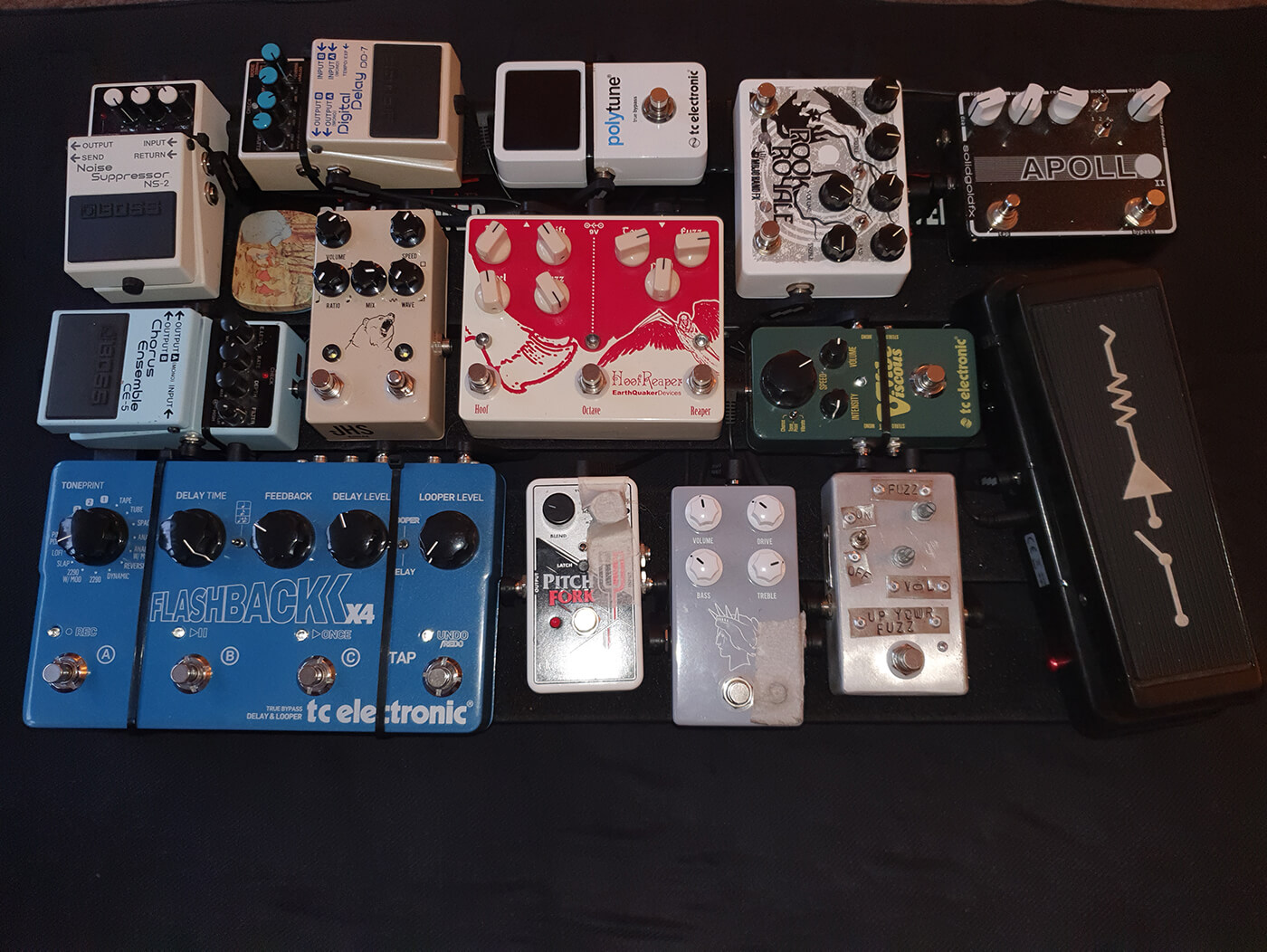 My pedalboard has been on something of a mammoth journey since its conception around four years ago. I started off with a Pedaltrain Jr. featuring a TC Electronic Flashback 4x (which still holds its place to this day and has never let me down); an old second-hand Marshall Tremolo pedal; a TC Polytune (still a steadfast workhorse); a Dunlop Jimi Hendrix Fuzz Face mini and a common Crybaby wah.

After a while, and realising the Fuzz Face was good, but needing something tamer with more mids, I invested in a Tube Screamer Mini. This was my setup for approximately three weeks, after which I entered the world of boutique pedals.

I purchased a Catalinbread RAH as I was desperate for something with a more tweakable EQ section and a different, rawer rock sound. The RAH replaced my almost redundant tremolo and my love affair with boutique effects blossomed.

Fast-forward a few months and I purchased a bigger board: a Pedaltrain Classic Pro. I populated the board with as many pedals as I could afford, going from paycheque to paycheque with at least one pedal a month.

Eventually, I filled the board and was pretty content with my setup. But with gigging more and getting sick of lugging the Millennium Falcon with me to every show, I bought a Pedaltrain Novo 24 with a hard case – this was the winning formula. With some help to neaten the board and some clever wiring, I created what I believe to be a top-class ‘board.

What sound are you gunning for?

I tend to favour big robust sounds with the ability to have good dynamic control via my guitar’s volume pot. The Echoplex preamp side of my Mojo Hand Rook is on all the time and I often kick in the Tonebender side of the EarthQuaker Devices Hoof Reaper or my JHS Twin Twelve alongside my Electro-Harmonix Pitchfork, with the latter set to an octave below to give single-note riffs a lot of power and fill some audio space.

Also, I ditched my reverb pedal a long while ago so I use a slapback delay to add a little airiness and a sense of space to my tone. Overall I’m aiming to get a sound that is rooted in the classic rock I love, but with an angrier, more angular feel.

Hands-down that would be my Mojo Hand Rook Royale. The drive side is to die for. With the clipping switch set in the middle position, gain at about 1 o’clock, EQ set with a slight bass roll-off and a bit of a high-end push, the pedal gives such a wonderful, well-rounded rock drive.

Add into the mix the boost side, which is basically a modified Echoplex preamp, then its tonal nirvana. The boost side is, as mentioned earlier, on all the time to give my sound more body and bring out some pleasing nuances.

My best advice would be to buy a slightly bigger board than you think you need to begin with, to save yourself some money in the long run.

Also, I would strongly suggest you invest in a good power supply with isolated power outputs. You’ll get the best out of your purchases and eliminate the constant hiss or hum from your rig.

Finally, and probably most importantly, go and try things with your rig if possible and don’t just buy something because someone else says it the best thing since sliced bread. Guitar-playing and tone are the most subjective, personal things going.

In my rig, I’ve used – and do use – different guitars and amps based on what I feel like I want to sound like on a particular day or show. My main guitars are a ’64 reissue Fender American Vintage Telecaster, which is a delight to play and sounds incredible. I also use my Gibson SG 70s Tribute, which has been upgraded with Seymour Duncan mini humbuckers, 500K SD pots and Bareknuckle paper and oil caps.

The second string of live guitars includes my Gibson Les Paul Classic Gold Top and my Supro Hampton. My guitar of choice on a given night depends a lot on the room and instinct. I do find that my ‘board reacts equally pleasingly to single-coils, humbuckers or my Supro’s goldfoils, but it is a palpably different tone between the three. 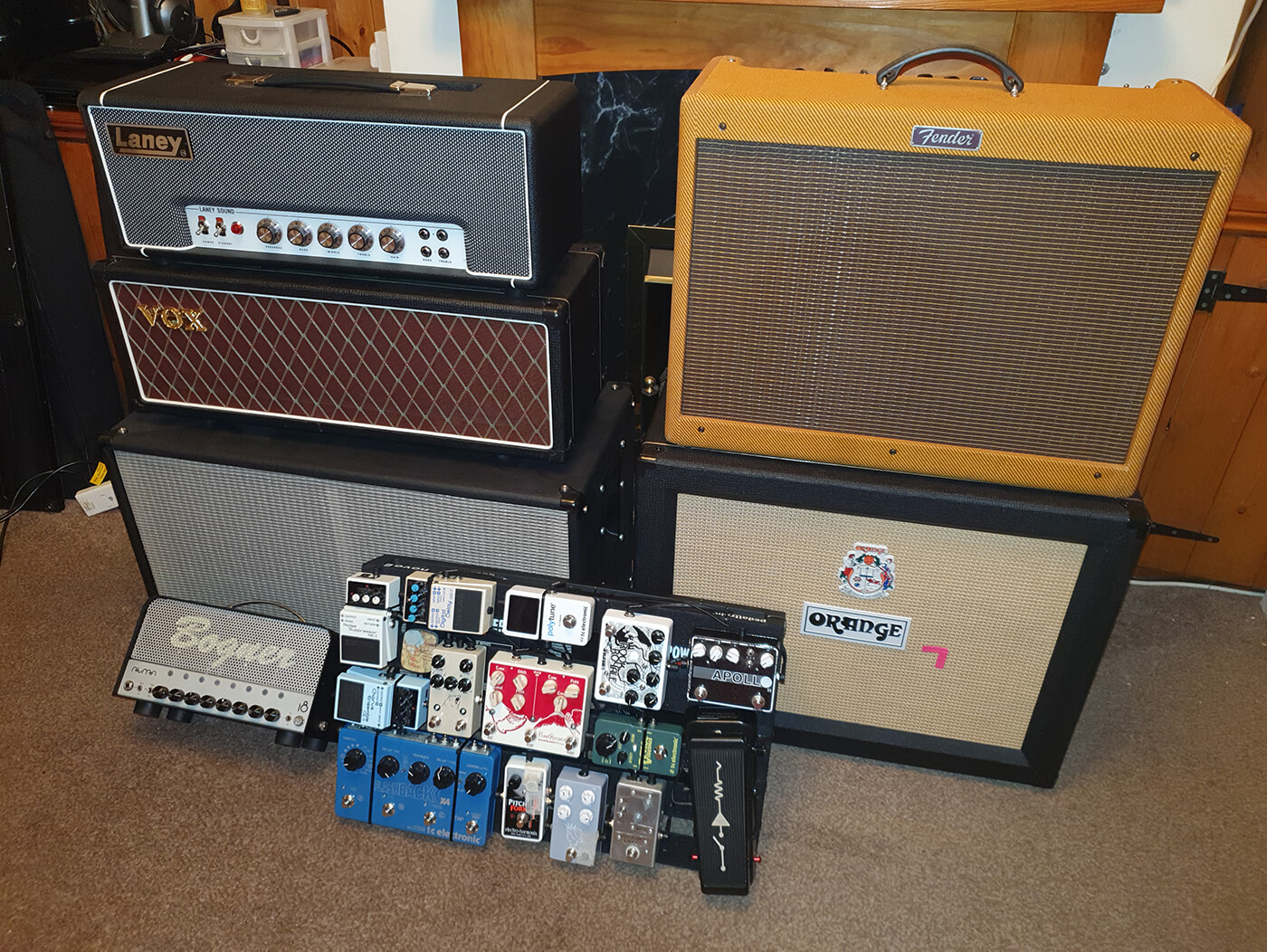 Amp-wise, it’s a real mixed bag. I favour my Bogner Atma 18-watt head into an Orange PPC212 cab for most shows, as it fits the bill with lower stage volume but still produces an incredible tone with all my pedals. For bigger venues, I use a Laney Black Country Customs LA30BL or my Vox AC30 head into the same Orange cab. However, I have been known to use my Fender Blues Deluxe for gigs further afield, just for ease of load in and reliability.