Your Board: Mike Insley’s pared-down rig of essentials

Based in Cheshire, Staffordshire, this reader shares his fondness for tinkering and gives practical advice for those just acquiring GAS. 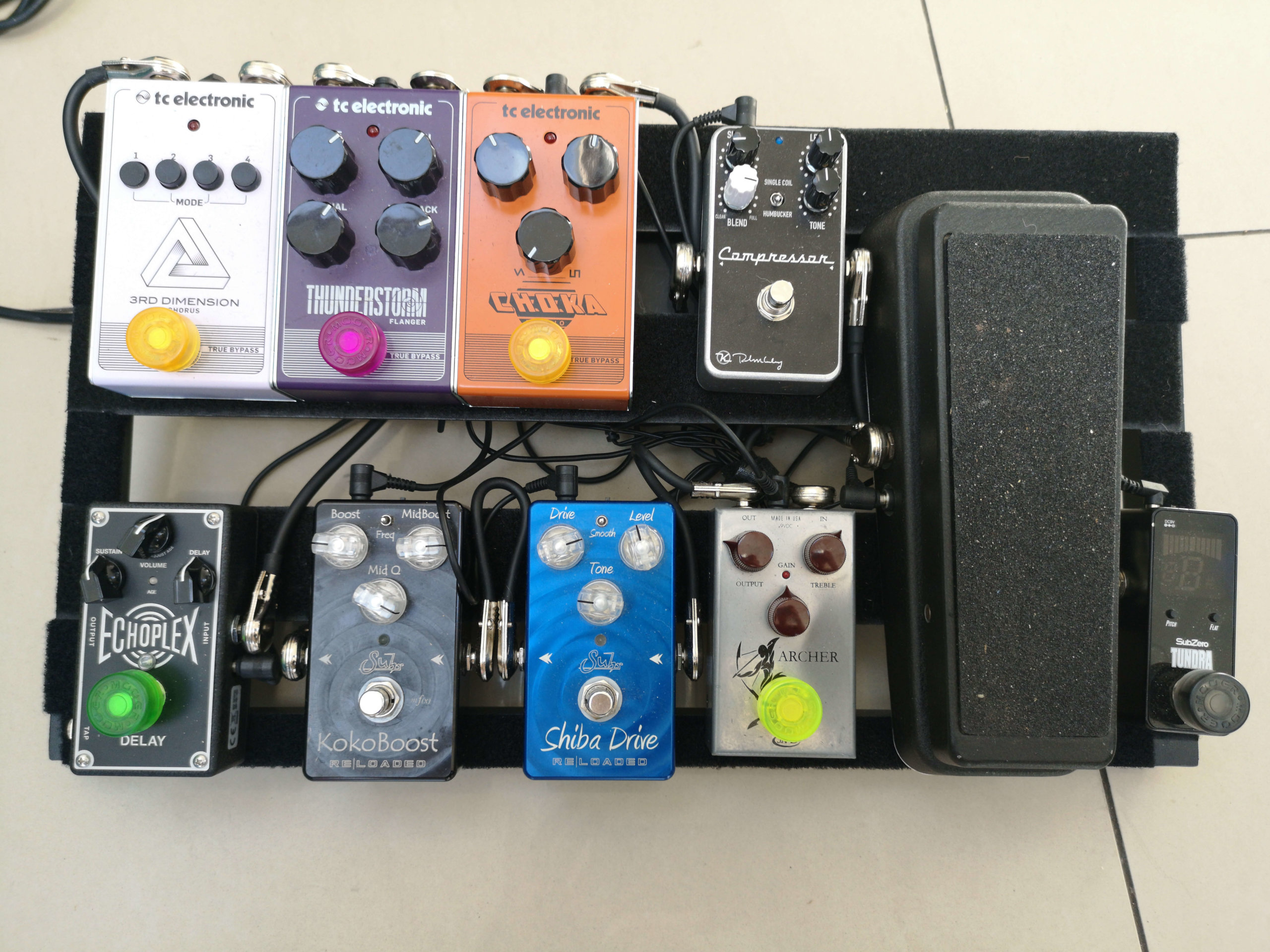 Hi Mike! Tell us about yourself as a guitarist.

Based in Cheshire/Staffordshire, I’ve been playing seriously since I was about 14 or 15, (30-ish years), that was when I started to teach myself. My brother and a mate also started playing around the same time, so we used to swap ideas and stuff we’d learned. Other than that, I’m completely self-taught. I’ve had guitars for as long as I remember, even an acoustic when I was 3 that was bigger than me! My first guitar, though, would have been a Kay double cut, bought for me by my folks when I was 10. I sadly no longer own [that guitar], although I do keep looking out for secondhand ones for sale as I’d like another.

I’m the lead guitarist in Venus Rising. We’re an (as yet) unsigned band playing our own brand of Folk-Rock originals, with the odd cover or two thrown into our live set. We have an album out called Happy Daze. However, I joined [the band] after it was released so I’m not on it. We are however currently working on album number two. I’m also the sole guitarist in a local covers band called Panic Room, who do a mix of Punk and Rock classics.

Style-wise I’ll try my hand at anything; I’ve played in Punk, Metal, Rock, and party bands where nothing was off the table. In Venus Rising, we even occasionally do our own take on a few Trance tracks as covers. I guess my default style would be rock, my lead style is also probably quite influenced by Prince’s playing more than any other guitarist.

Do you have an artist website/track/video to shout out about?

Venus Rising’s website is venusrising.uk, where you can find some live videos and tracks from the album. My favourites are Lazy Dazy, RBE and Rainbow Child. We’re also on Facebook. 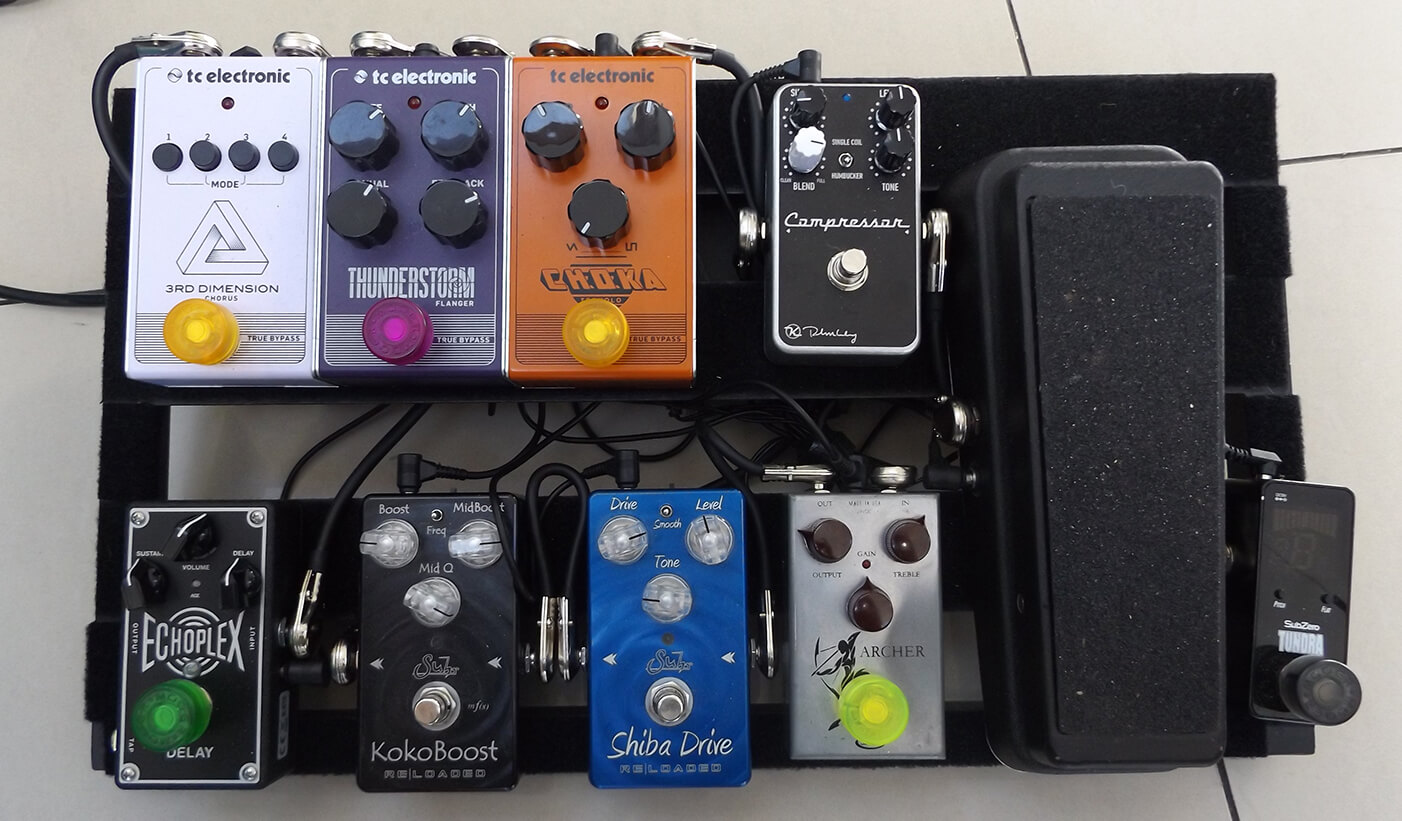 It changes all the time – it started out small, became a monster, but is now more pared back to do what I need it to. I’ve been known to rebuild completely or abandon stompboxes for a G System, M13 or similar. However, when I come back to separates, I always seem to follow a standard chain of Tuner > Compressor (always on) > Wah > OD1 > OD2 > Tremolo > Flanger > Chorus > Delay. I might occasionally add a Whammy and/or a Phaser pre-OD1 if needed.

Everything goes into the front of the amp. I have previously split my signal between preamp and effects loop, but these days I prefer to keep things simple. I’m a bit of a sucker for vintage Boss pedals, although when I was rebuilding this time, I [had my eye on] the new TC line that is competitively priced. I’ve tried about five, all of which are excellent.

A nice warm clean, crunchy overdrive and a more sustained gain for those songs that need higher gain. My amp is set using the traditional Fender ‘all the sevens’, but with the Presence up about three quarters. I keep the drive low and push the amp using my OD pedals. I’ve learned that over-saturation is less pleasing to the ear, and cuts through a mix less than a great tone and a pushed valve amp. 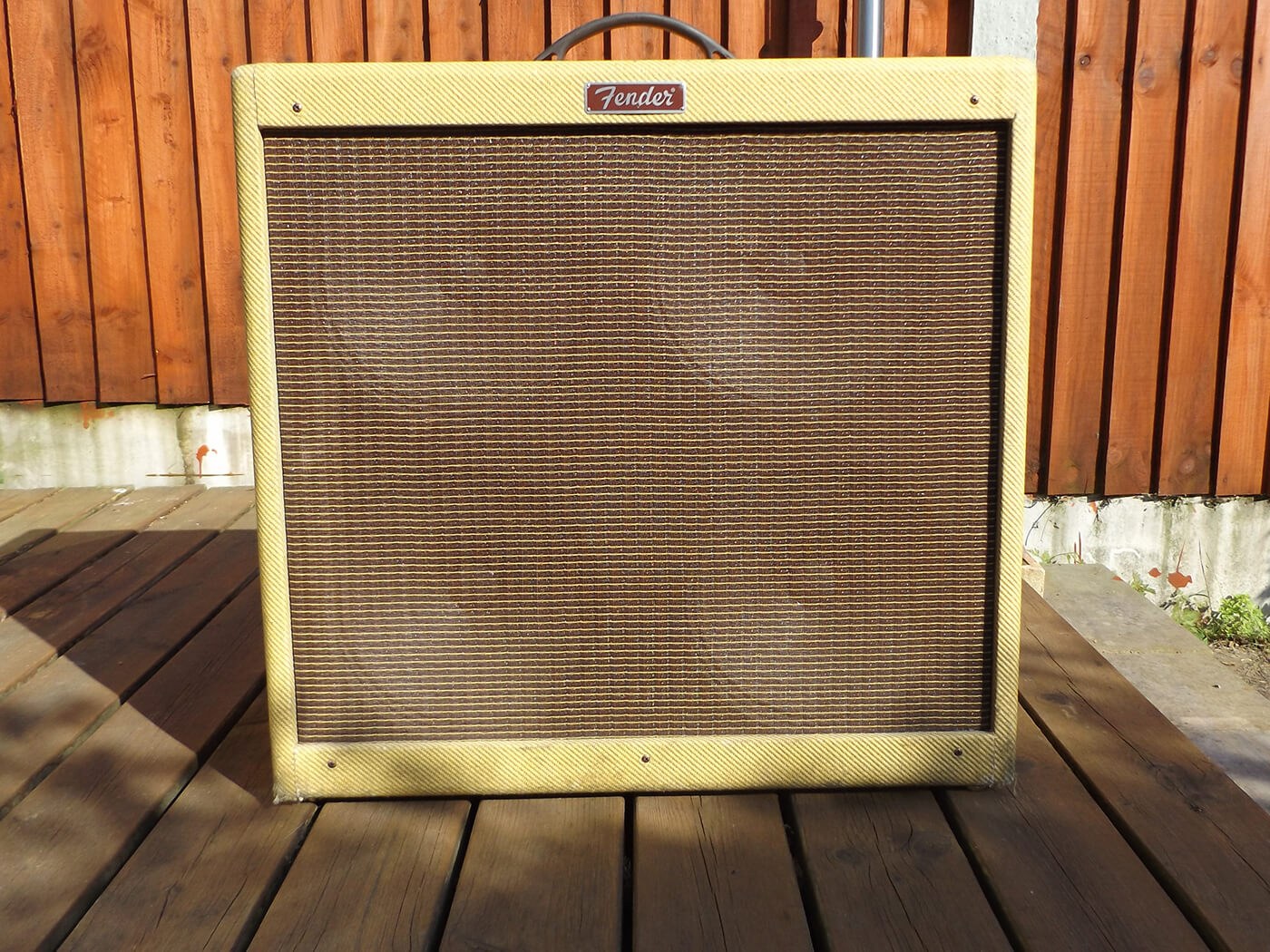 I mainly use a Fender Blues 410 DeVille. Or when that puts my back out, I use an Orange TH30 combo. That gets used a lot less these days though as I like the stacked gain sound I get from the Archer and Shiva Drive pedals I’m using now.

Experiment, but start off with a couple, maybe and overdrive and a delay. There’s no ‘right’ way to set up a signal chain (except perhaps boost is more effective after gain) or ‘right’ pedal to use. Try lots of pedals out – try delay or modulation into gain. Overdrive/Distortion pedals all work differently with [various] amp so try loads of those. Don’t be afraid to try budget pedals. Be prepared for a lifetime of searching for your perfect setup because once you start it’s a never-ending quest.

In Venus Rising my main guitars are a stock Gretsch White Falcon (Centre Block Double Cut version) and a very modified Squire John 5 Tele which is pretty much my go-to guitar for most situations. [For this Tele,] I’ve swapped out the stock pickups for a Custom Trembucker in the bridge and a Rhino overwound in the neck. I’ve also added a tone pot, coil tap on both pickups, a series/parallel switch and kill switch.

I also occasionally use a Squire Jazzmaster. In my covers band, I use a 2012 Reverend Club King 290, my modded John 5, occasionally an EMG equipped custom-built guitar from a luthier friend of mine, and a Parker P36 that’s had its stock pickups swapped out for Quarter Pounders.