The history of guitars is full of interesting and original ideas that never quite caught on, but Space Shuttle machinist John Veleno’s rare all-aluminium designs would go on to become highly sought after. 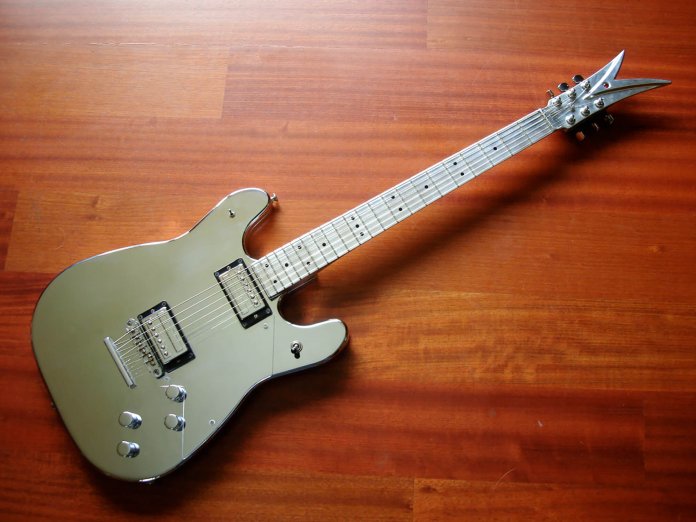 Most guitars are of course, made of wood, but every once in a while, something unique comes along that challenges the traditional ways of doing things. We’ve seen guitars built out of all sorts of crazy things – from carbon fibre to crayons coated in epoxy. Often times these builds come off as a novelty, but this story is about a guitar made of solid aluminium – a guitar that would become highly sought after by a wide array of artists.

Back in the late 60s, a master machinist and manufacturing engineer named John Veleno built his first guitar the best way he knew how, out of aluminium. Veleno’s day job down in St. Petersburg, Florida was to build aluminium electrical housings for space shuttles that were routinely launched from nearby Cape Canaveral.

He was also a musician who gave guitar lessons in his spare time. While working at the machine shop, Veleno started doing home projects such as building a guitar-shaped mailbox out of billet aluminium – this was a clever workaround to advertise his guitar lessons as city ordinances would not allow him to put up a sign. This blossomed into him building his first hand-made guitar in 1966-67, built entirely out of aluminium. He used the guitar for his own personal enjoyment but later retired it to a closet. 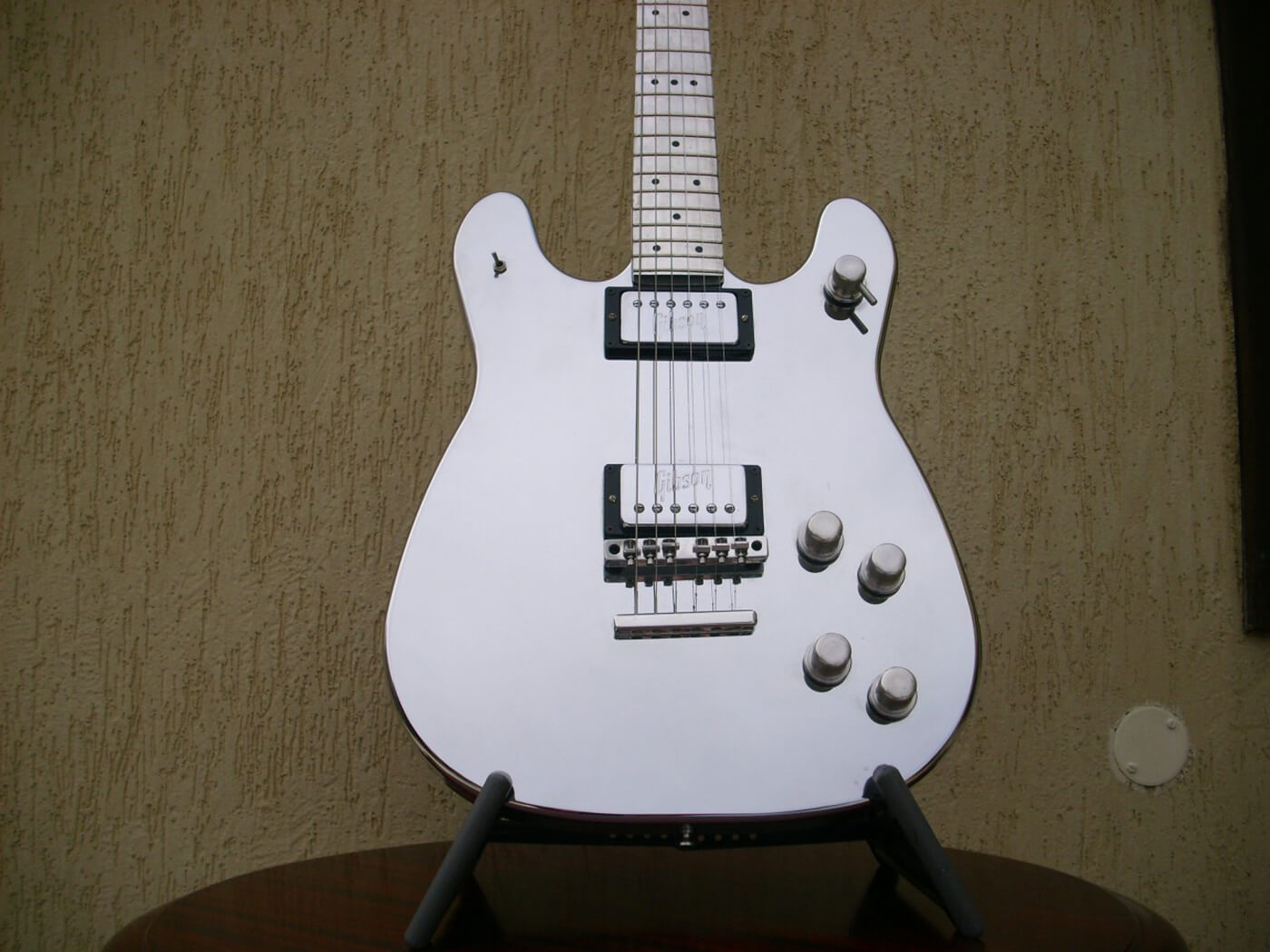 Later, a friend found out that he had built the guitar and introduced him to some people who made stage-costumes for artists like Jimi Hendrix and Sonny & Cher. With some newfound encouragement, Veleno started bringing the guitar to local gigs for artists to check out. He brought it to Jorge Santana, Carlos’ brother, who loved the guitar but suggested changing the headstock to a Gibson style 3×3 design rather than the Fender style headstock with 6 pegs on one side. The headstock evolved into a unique “V” shape and featured a ruby mounted in the centre of each one.

Veleno started building guitars for other artists in the early 70s. The bodies started out as 17-pound blocks of 6061 aluminium and were machined down to about two and a half pounds [the overall weight was usually around 8 pounds]. The guitar was a two-piece hollowbody construction, joined at the centre, with no visible external fasteners. The two body pieces were held together by the screws in the bridge and the neck joint. They were all machined from a solid piece of aluminium so there are no welds and no bends, making them incredibly strong. 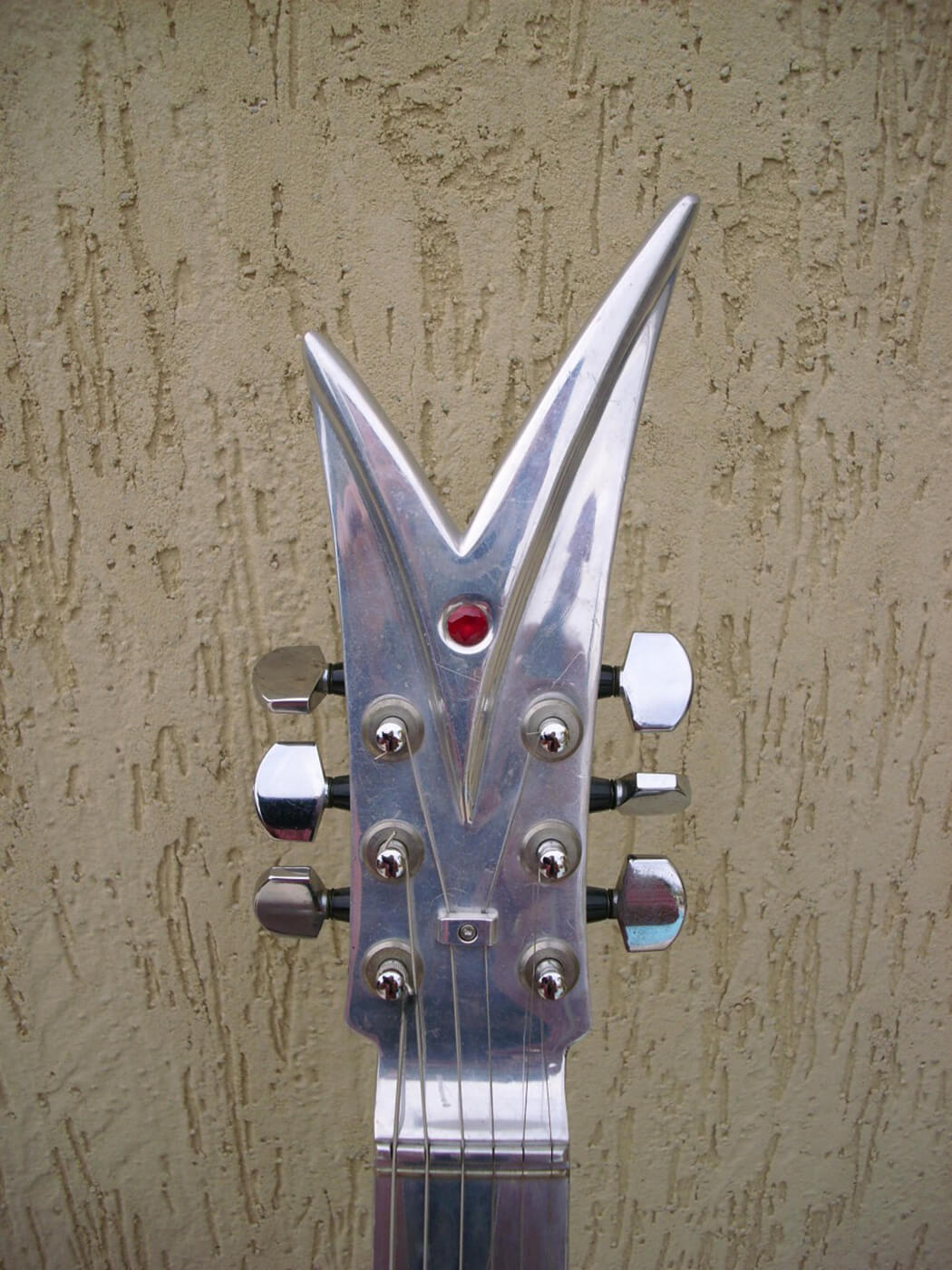 The necks were also carved from a single piece of aluminium [Almag 35 – the most corrosive resistant alloy available at the time] and bolted on to the body. The frets are standard fret wire that is glued into the fret slots cut into the fretboard. Some of the earliest builds had 21 frets but the majority had 22. The necks were the same profile as a Standard Fender Stratocaster. Another interesting biproduct of the rigid aluminium construction is that the necks did not need nor feature a truss rod. The necks were a bit heavy, making them slightly unbalanced.

During what is known as the “Original Run” John Veleno created between 195-200 Veleno Originals [as they came to be known] between 1970 and 1977. Other models were also built but the “Original” was the most highly sought after – he did make at least one bass as well. He built them all during the evenings after work as he still maintained a full-time job. The Veleno Guitars were essentially a side gig for him. He may have never dreamed they would develop the highly collectable cult status they have today. 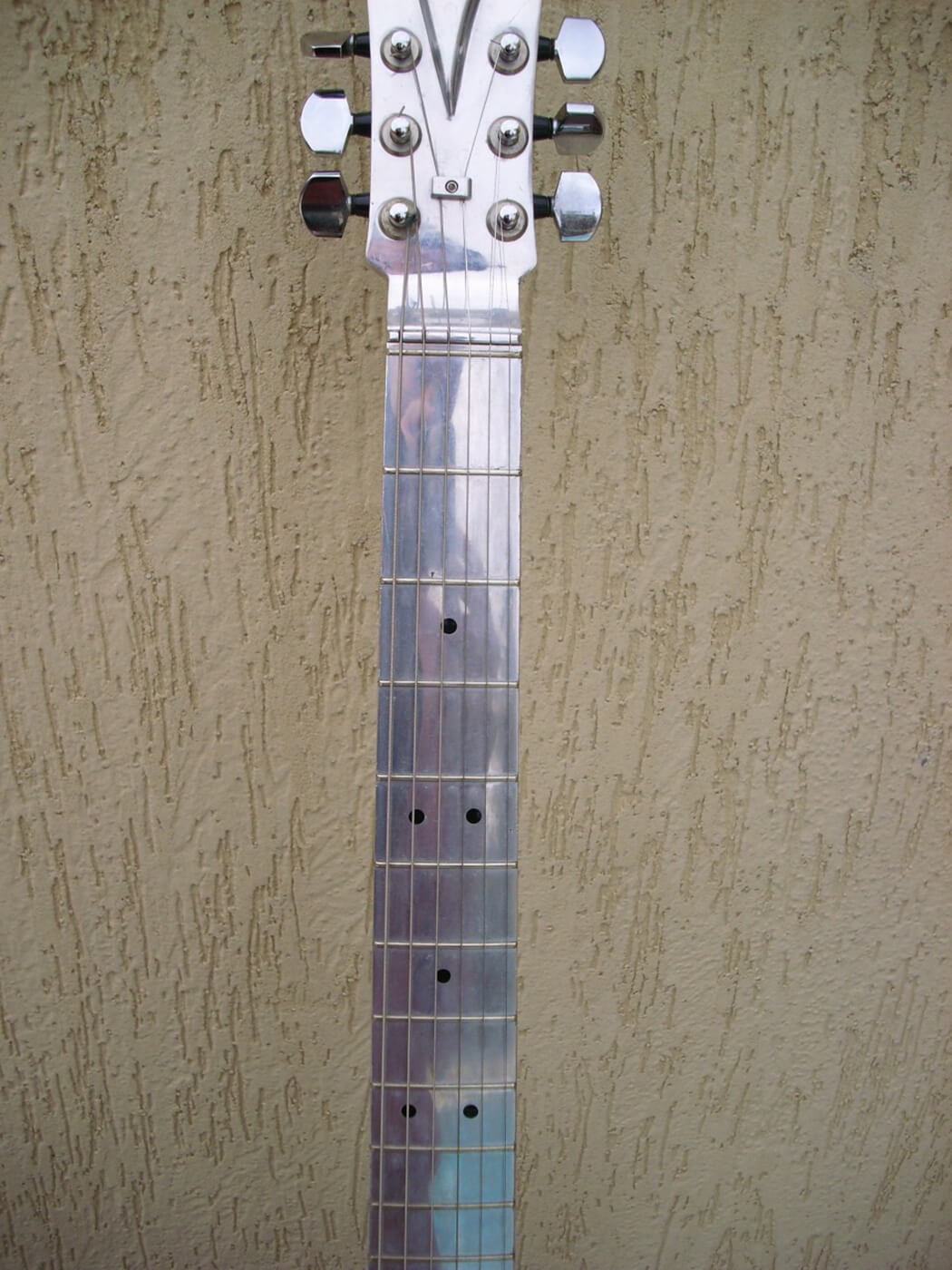 The shape of Veleno Original did vary a small amount – some were somewhat of a “double-cutaway Telecaster” shape and others were more like a Les Paul Junior. Many of the guitars were polished, but some were not, some were chromed, and at least one was gold plated and featured three humbuckers [that one belongs to Todd Rundgren]. Some were anodized in various colors. The electrical components and hardware often varied from build to build as well. Sometimes Veleno would use Tune-O-Matic or Guild bridges, but typically he would make his own. Veleno guitars all featured humbuckers – depending on the era, they would have Gibson, Guild, DeArmond, or DiMarzios.

They sold for $600 each [about $3100 when adjusted for inflation]. Veleno was able to keep production costs down because he did everything himself – no employees, no overhead, no engineers. He was known to assemble them in his living room while watching television. 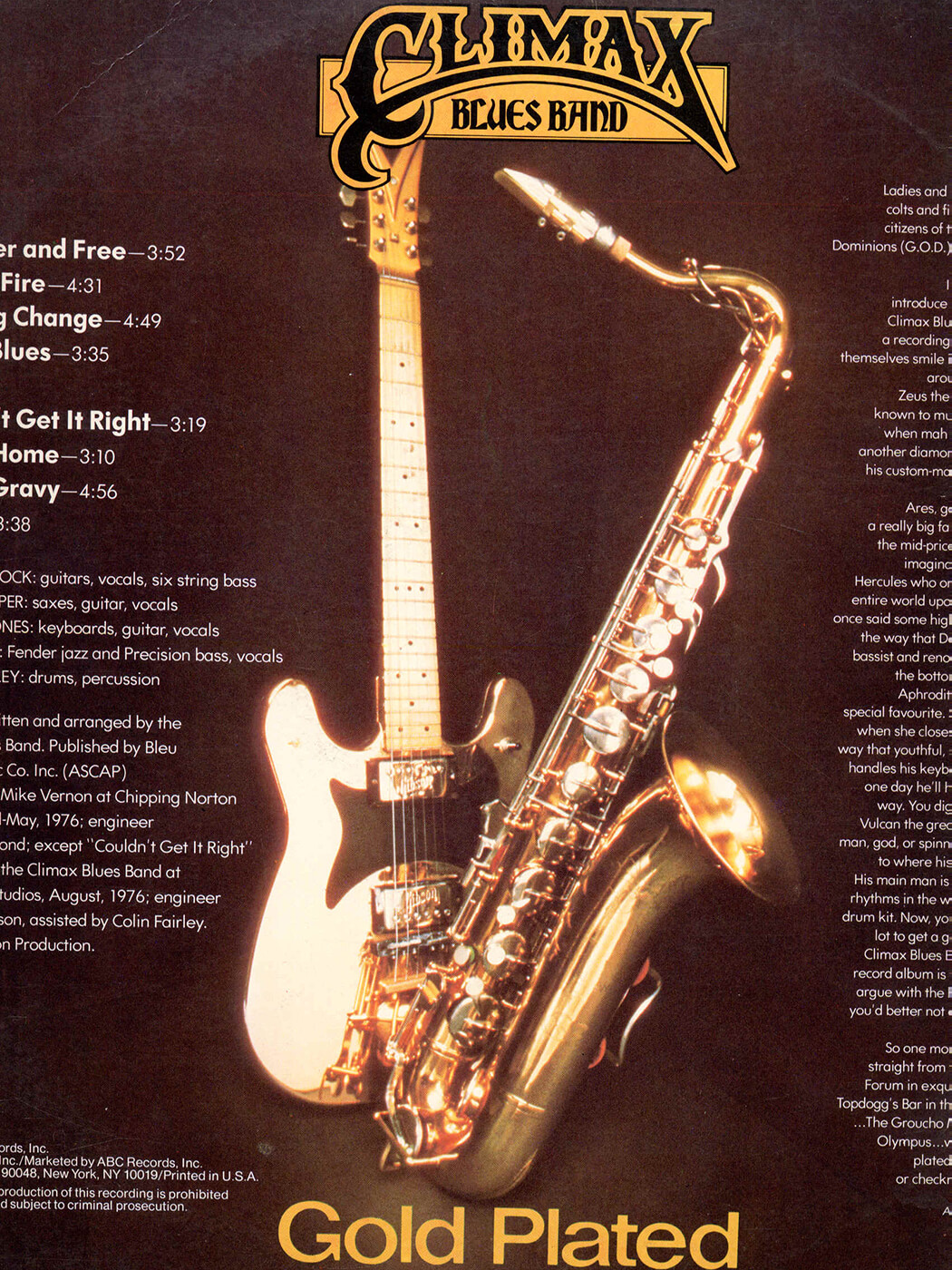 Veleno Originals were used by Eric Clapton, Marc Bolan, Lou Reed, The Cars, Gregg Allman, Johnny Winter, Ace Frehley, John Lennon, and many more. You can occasionally find Veleno Originals on the secondhand market, but they typically fetch some pretty lofty prices – between $20,000 and $30,000 and are rapidly snatched up by collectors. Many of them were sold directly to big-name musicians, adding to the rich history, and expensive resale price of the guitars.

They became popular on stage due to their insusceptibility to the elements – their durability made them great for touring. Their rigidity also helped them to be a unique and dependable addition to most studios. Steve Albini and Todd Rundgren used them in the studio [Kurt Cobain famously used one on Very Ape – that one belonged to Albini]. 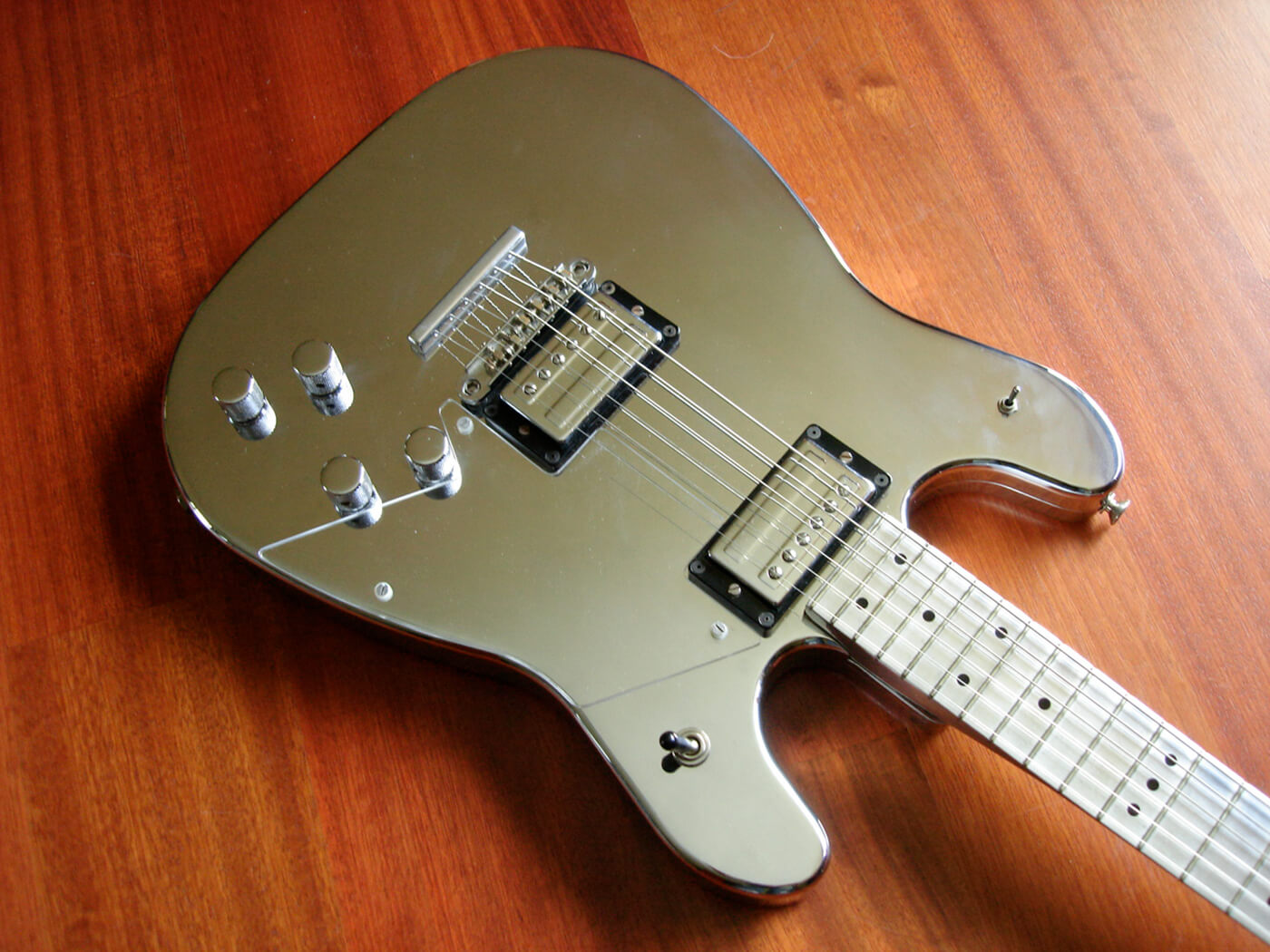 Structural stability aside, the guitars offered a very different tone compared to guitars made of wood. The tone has been described as being sharp and having much more sustain than wood. The expansion of the tonal palate made it an excellent tool for artists seeking to depart from the sound we now know as classic rock. The Veleno was much more than a novelty item for collectors – it was a valuable tool for the new wave of rock that would soon take over.

Surely the Veleno Originals were guitars that truly earned the title of “Original”. John Veleno has since passed away but his legacy as a master metal craftsman lives on.