Boutique overdrives and fuzz boxes occupy plenty of real estate on this 'board. 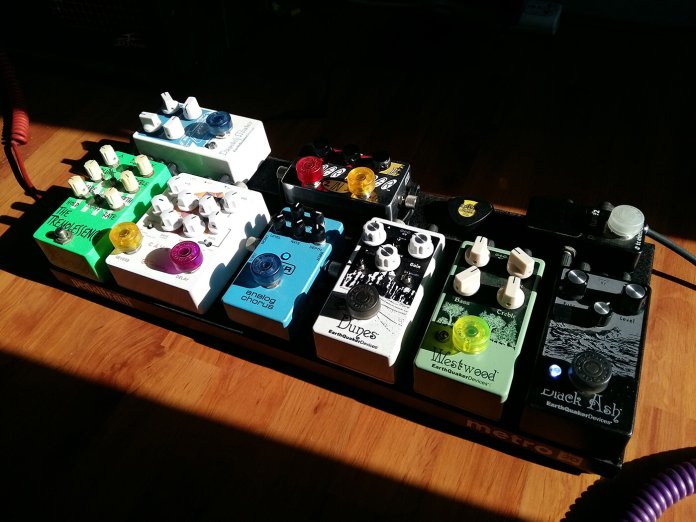 Hi, Jason! Tell us a little about yourself.

I’m based in Manila, the Philippines, and I’ve been playing guitar for over 25 years now. Currently, I play for two bands. The first one, Pedicab, has been around for 15 years, and we play rock with a post-punk edge, influenced by the likes of LCD Soundsystem, Gang of Four, Devo, The Fall, New Order, and, occasionally, psychedelic stuff like The Flaming Lips.

The second one, Cheats, is more of a melodic indie rock band that’s reminiscent of Broken Social Scene, Arcade Fire and New Pornographers.

About three years ago, I was really addicted to pedals. A shop that sold boutique brands like EarthQuaker Devices, JHS, Walrus Audio and Dr. Scientist opened across the street from where I worked, and I would buy at least one pedal every month. It got ridiculous to the point that I decided to make a second board for my other band, even if I used the same one for both bands if they played on the same night.

And then last year I decided to simplify my life and put my favourite boxes from both boards into a single board and sell the rest. I realised that I didn’t need that many sounds, especially with regards to the way I play.

What sound are you gunning for?

My current board is pretty much a reflection of my playing style, which is basically rhythm-based with a bit of grit and texture, so my tone is pretty straightforward. Dirt-wise, I always have a clean drive (right now it’s the EQD Westwood) and a drive with slightly higher gain (EQD Dunes), and a fuzz.

I’m obsessed with fuzz and reverb. Of all pedal types, the most I’ve owned are fuzzes. I’ve tried so many units in search of the perfect fuzz tone. I’ve tended towards gated, velcro-y fuzzes until I discovered Tone Bender clones. They sound so natural, like fuzzy overdrives, and the EQD Black Ash is the first fuzz I’ve ever owned that could cut through a live mix without having to be stacked with anything else.

Reverb is another recent discovery, because I used to like my guitar dry and in your face. Now I like playing with a bit of space and with less aggression. The Keeley Caverns V2 is a real bang-for-the-buck pedal; the reverb and delay modes are superb, and you can activate them independently. I also have an EQD Dispatch Master for subtler needs. I never really used tap tempo since I use echo effects for added texture.

I’ve never used a chorus before, but now I have an MXR chorus on my board. I want to learn to play “pretty” things like Johnny Marr does. But tremolo is my favourite modulation effect – I’ve always used one since 2004.

What’s the one pedal you can’t live without?

Right now it’s the ZVEX Super Duper 2-in-1. Before that, I had a Box Of Rock, which is one of my favourite overdrives ever, and then I upgraded to a Double Rock. I recently decided that I wanted my ‘always-on’ sound to have less gain, so I got the Super Duper 2-in-1. It’s the newest pedal on my board, but I’ve already realised how useful it is. I always leave one channel on to bring the low-output pickups of my Jaguar to life. And if I need a boost, I hit the other channel.

I use a Pedaltrain Metro 20, so board space is limited. I choose to use a relatively small board mainly for convenience, because I don’t own a car. It also keeps me from buying more pedals than I need! Although sometimes I wish I could still fit my ZVEX Mastotron so I can still have a gated fuzz sound, or an octave/synth box on it. 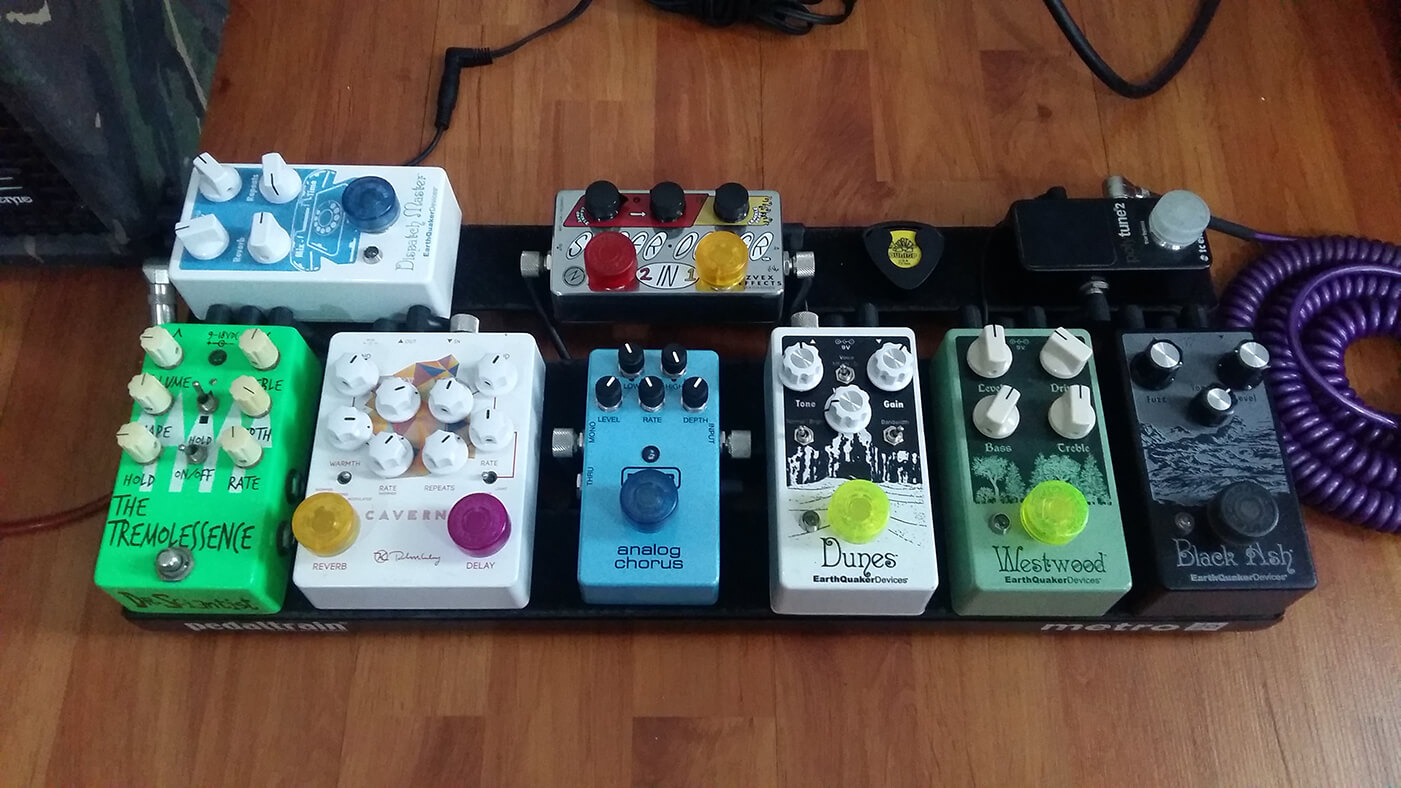 What pedalboard, power supply and cables to you prefer?

I don’t really have a preference, but I use Lava Retro Coils because they’re the only coil cables available here that come in many colours. I use whatever patch cables I can get, and my power supply is a TrueTone 1Spot, although I’ve also used a Godlyke PowerAll.

Tell us about those footswitch covers.

The candy toppers are from Mooer Audio. Nothing fancy – they cost less than a dollar each! They just make my pedals more interesting to look at and easier to step on.

I’m thinking of building a smaller fly board around my ZVEX Double Rock. I’m looking at getting a Box Of Metal, an Ibanez Chorus Mini and a compact reverb/delay.

I want a 1981 Inventions DRV. It looks and sounds excellent. Also, A Quiet Theory Prelude. Maybe a Thorpy FX Fallout Cloud or Warthog – basically stuff I can’t easily get here [in the Philippines]. 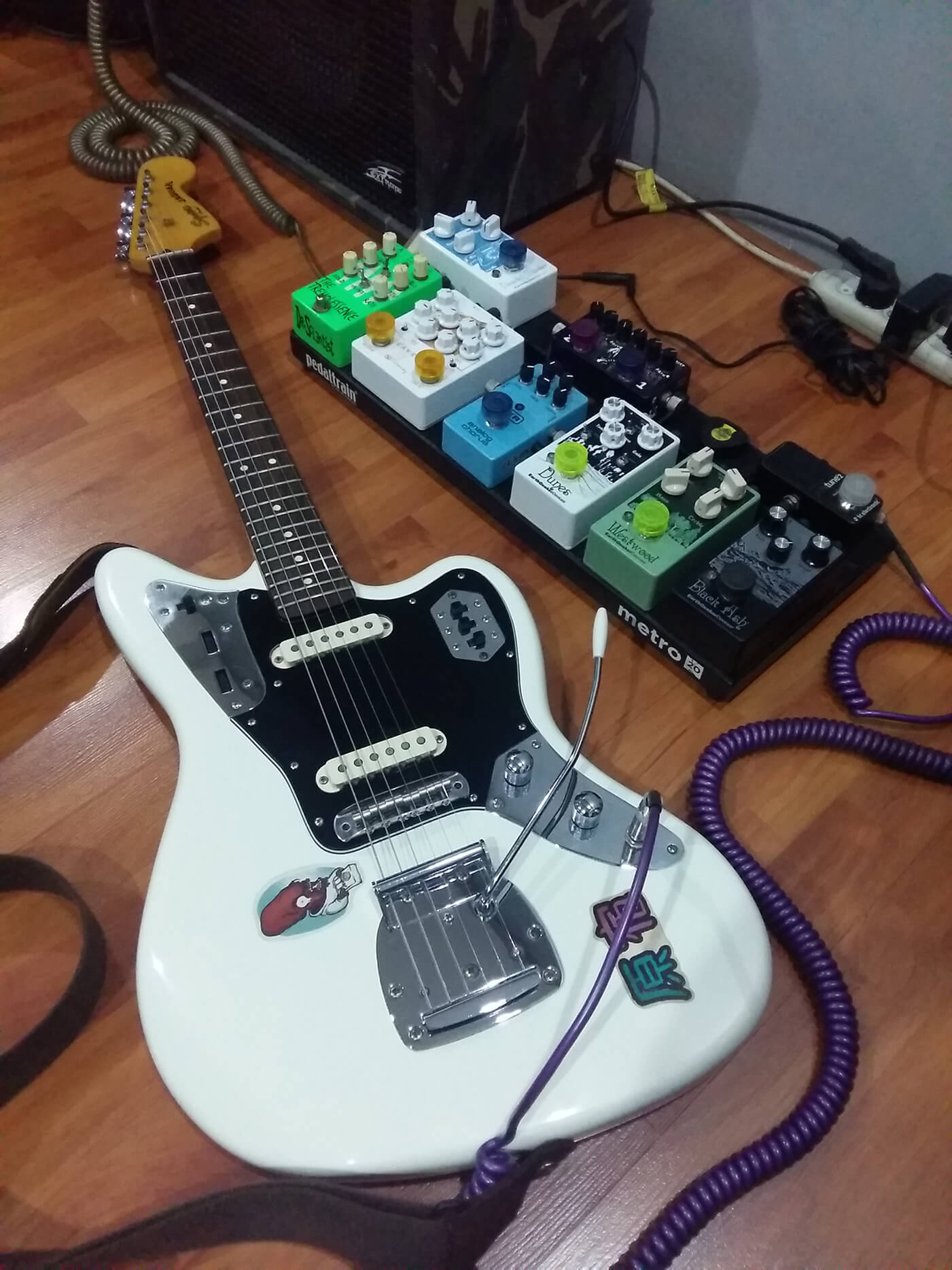 There are basic rules, but when it boils down to your taste, there are no rules, really. Go with what sounds great to your ears and fits your needs. Don’t get a compressor just because everyone else says you should. Find pedals that inspire you to play differently. A great-sounding delay isn’t useless just because it doesn’t have tap tempo. Just be creative in using it.

Also, boutique isn’t necessarily better. When I started out, my only options were Boss pedals. Now I’d love to have a Boss vibrato or an analogue delay. I envy people who still have a Boss collection, especially the older pedals.

What guitars do you use?

I have a Squier Vintage Modified Jaguar that has pickups from a Johnny Marr signature Jag, upgraded electronics, and a Staytrem bridge. I also use a stock Edwards double-cut Les Paul Special copy with P-90s, and a Fender Japan 60s reissue Strat with an Emerson Custom blender prewired kit installed.

In the Philippines, we tend to use whatever amps the venue has, but I prefer Fender amps in general – a Twin Reverb, DRRI or a Bassman – or a Vox AC30. At home, I play through a solid-state Laney LX65R, which I sometimes bring to small club shows.