by Guitar.com
#Effects#Gear of the Year
Features

Five of our favourite stompboxes of the year.

Despite 2015 being hailed in these very pages as the year of the tiny pedalboard, plenty of bigger boxes have impressed us too, and it’s no exaggeration to state that we could have easily devoted half of this issue of the magazine to a round-up of our favourite stompboxes of the year. Here are five of the toppermost…
Orange Bax Bangeetar 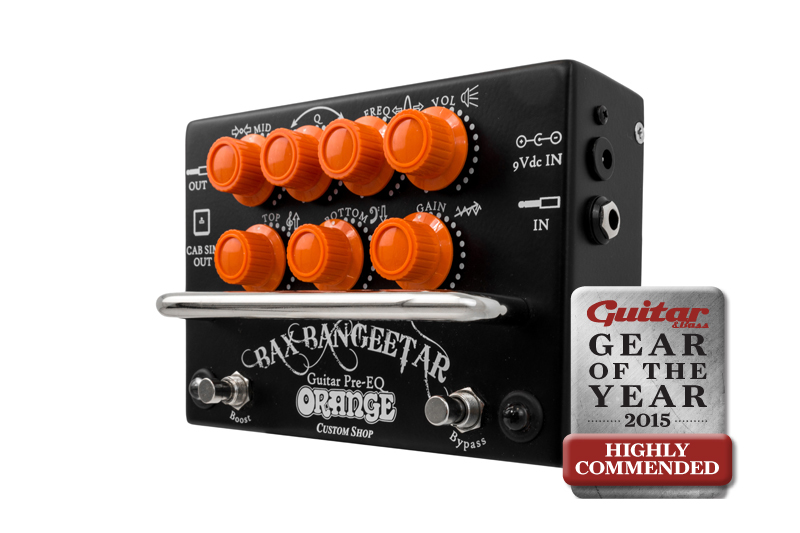 • Price £279
• First reviewed Vol 26 No 12
• Contact Orange Amps 0208 905 2828
www.orangeamps.com
Much more than simply a stack-in-a-box or an overdrive pedal with additional knobs, Orange’s first pedal since 1972 is a powerful and incredibly versatile tone-shaping tool that’s great for recording and distressing vocals, bass and drums as well as scultpting guitar sounds. Limited to only 2,500 units, the Bax Bangeetar – named after the onboard Baxandall-style EQ – comes as close as you can possibly get to capturing the brain of Orange technical director Adrian Emsley in the confines a stompbox. Expect to see more Orange pedals in 2016.
ThorpyFX Gunshot 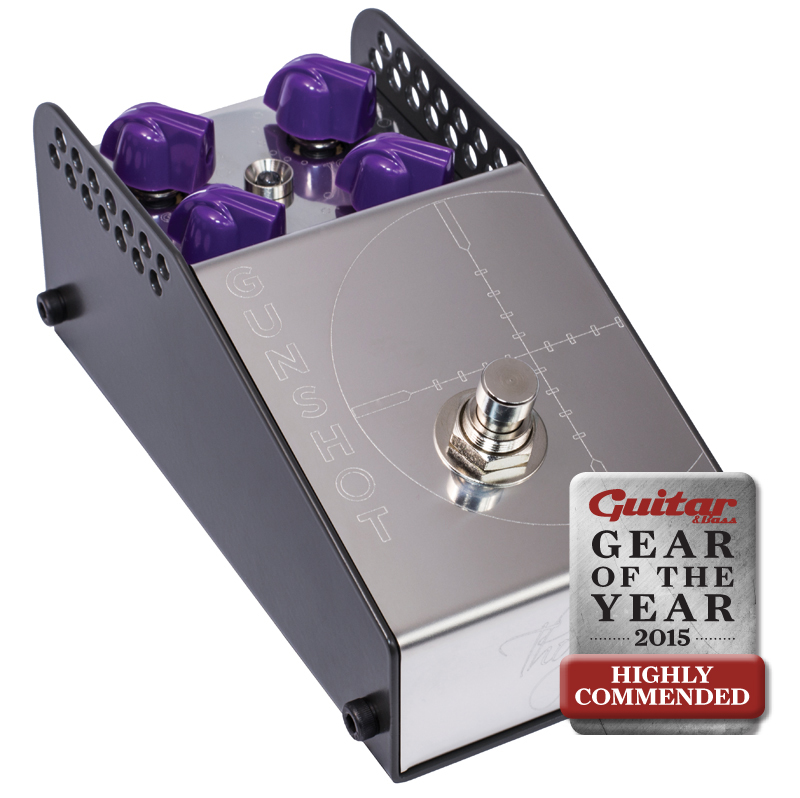 • Price £185
• First reviewed Vol 26 No 11
• Contact ThorpyFX
www.thorpyfx.com
If British Army Major Adrian Thorpe had targeted 2015 for world domination, he must be very pleased with his work over the last year indeed. The Gunshot overdrive started the ball rolling in late spring, with industry movers and shakers and tonehounds in the know quickly cottoning on to its hugely satisfying medium-to-high-gain tones and exceptional build quality. The Muffroom Cloud followed, and Thorpy has a couple more overdrives in the works, which will be featured in G&B in the coming months. Excellent work Major Thorpe, we salute you sir!
Electro-Harmonix Super Pulsar 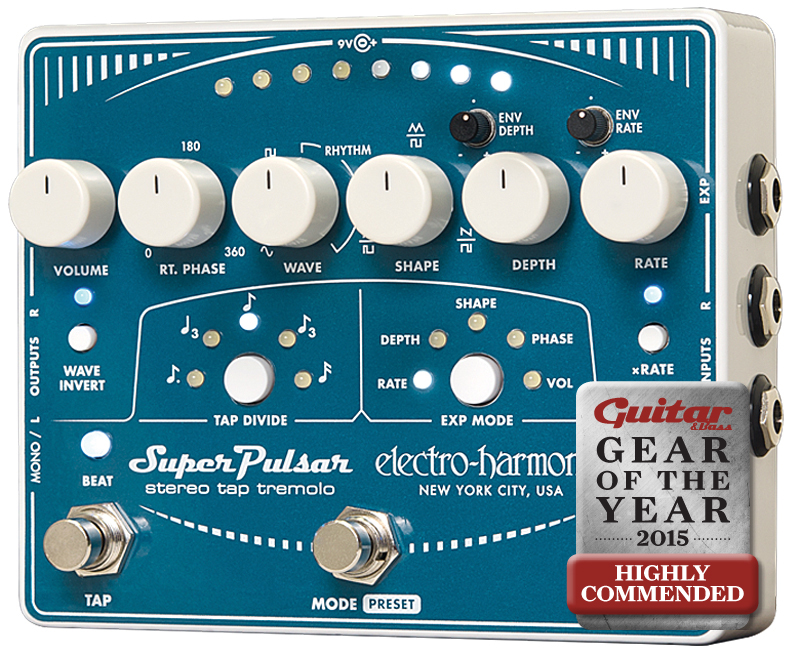 • Price £219
• First reviewed Vol 27 No 02
• Contact Electro-Harmonix
www.ehx.com
Tremolo is one of the staple electric guitar effects, but the Super Pulsar pushes it to infinity and beyond in a way that’s guaranteed to appeal to noisenik experimentalists everywhere. Whatever kind of tremolo sound you want, the Super Pulsar has it covered; it might even change the way you think about the effect, too. Every so often, a guitar effects processor comes along with the creative potential to become not only your signature sound but central to the identity of your band as a whole; this is one such unit. Very impressive indeed.
Boss RV-6 Reverb 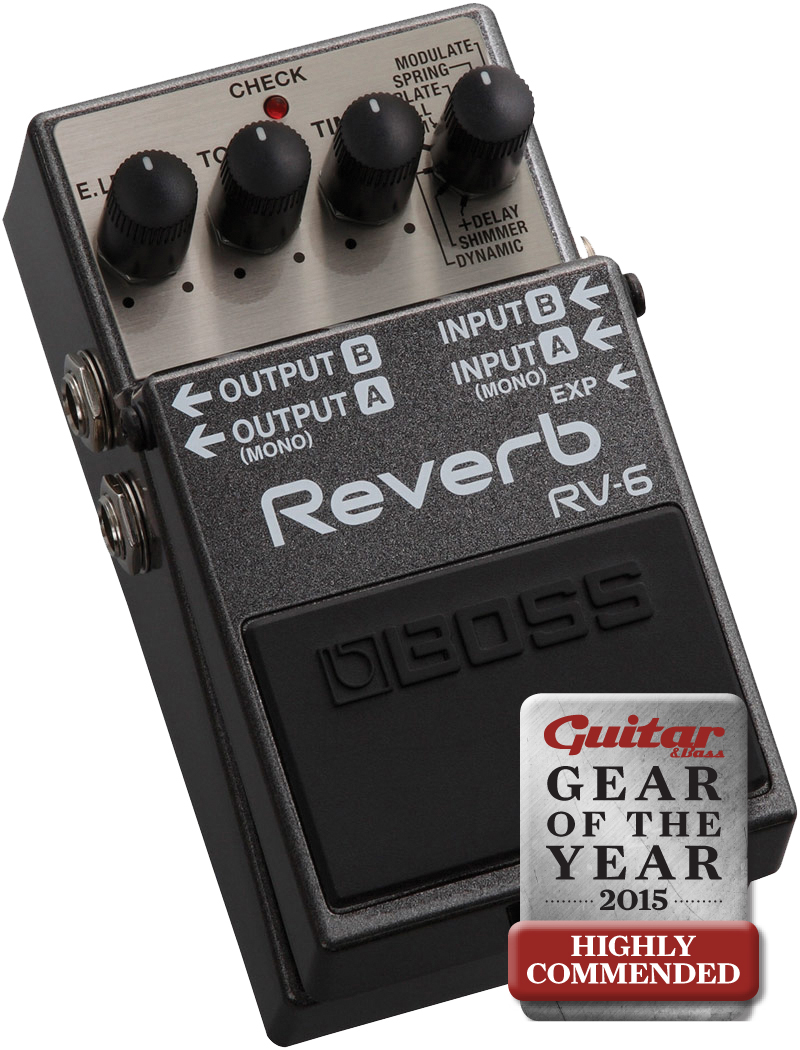 • Price £119
• First reviewed Vol 27 No 03
• Contact Roland UK 01792 702701
www.roland.co.uk
Stompbox reverbs have come a long way since Boss launched the RV-2 back in 1987, and the company’s latest digital reverb pedal is also its greatest to date. There are eight reverb modes, from a convincing classic spring emulation to shimmer ’verb and +delay, which is an expansive blend of hall reverb and digital delay. Dynamic reverb is a very cool addition – hit the strings hard and it will retreat into the background, then swell again when there’s space to be filled. We like almost everything about this inspiring pedal; awesome stuff.
J Rockett Audio Designs Archer 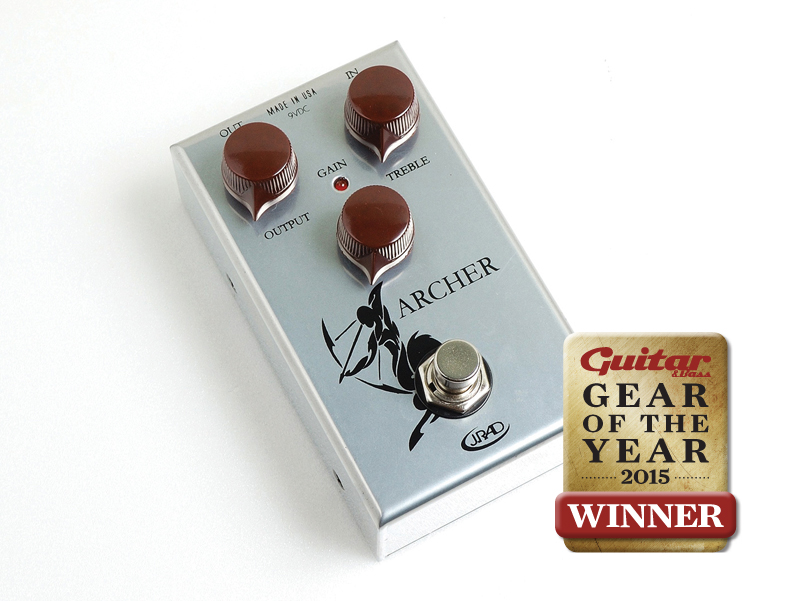 • Price £149
• First reviewed Vol 26 No 10
• Contact Zoom UK Distribution 08432 080 999
www.rockettpedals.com
JRAD was founded a decade ago by Colorado natives Chris Van Tassel and Jay Rockett with the needs of working guitarists in mind, not least high-calibre session pros such as Tim Pierce and Guthrie Trapp, for whom the pair developed signature overdrive pedals.
No strangers to collaboration, they also helped Klon mastermind Bill Finnegan produce the first 1,500 KTR pedals. Though the relationship didn’t last, the unique insights they gleaned allowed them to produce the Archer, effectively the affordable ‘son of Centaur’ that many wish Finnegan had made. The Archer isn’t the first or the last klone, but it’s certainly one of the best; there’s perhaps a hair more bite from the real thing, and the Archer possesses a slightly grittier midrange, but it’s very close indeed.
For a tenth of the going rate of an original Klon, the Archer offers near-as-damn-it tones in a much more pedalboard-friendly enclosure. As a straight-up overdrive, it’s not everyone’s cup of leaves and hot water, but running the gain low and output high yields an organic, amp-like boost that you won’t want to switch off.