Guitar.com Live: Everything you need to know about Justus West

The guitar wunderkind, known for his work in hip-hop, approaches music with the wisdom and maturity of someone who’s studied it over a lifetime. 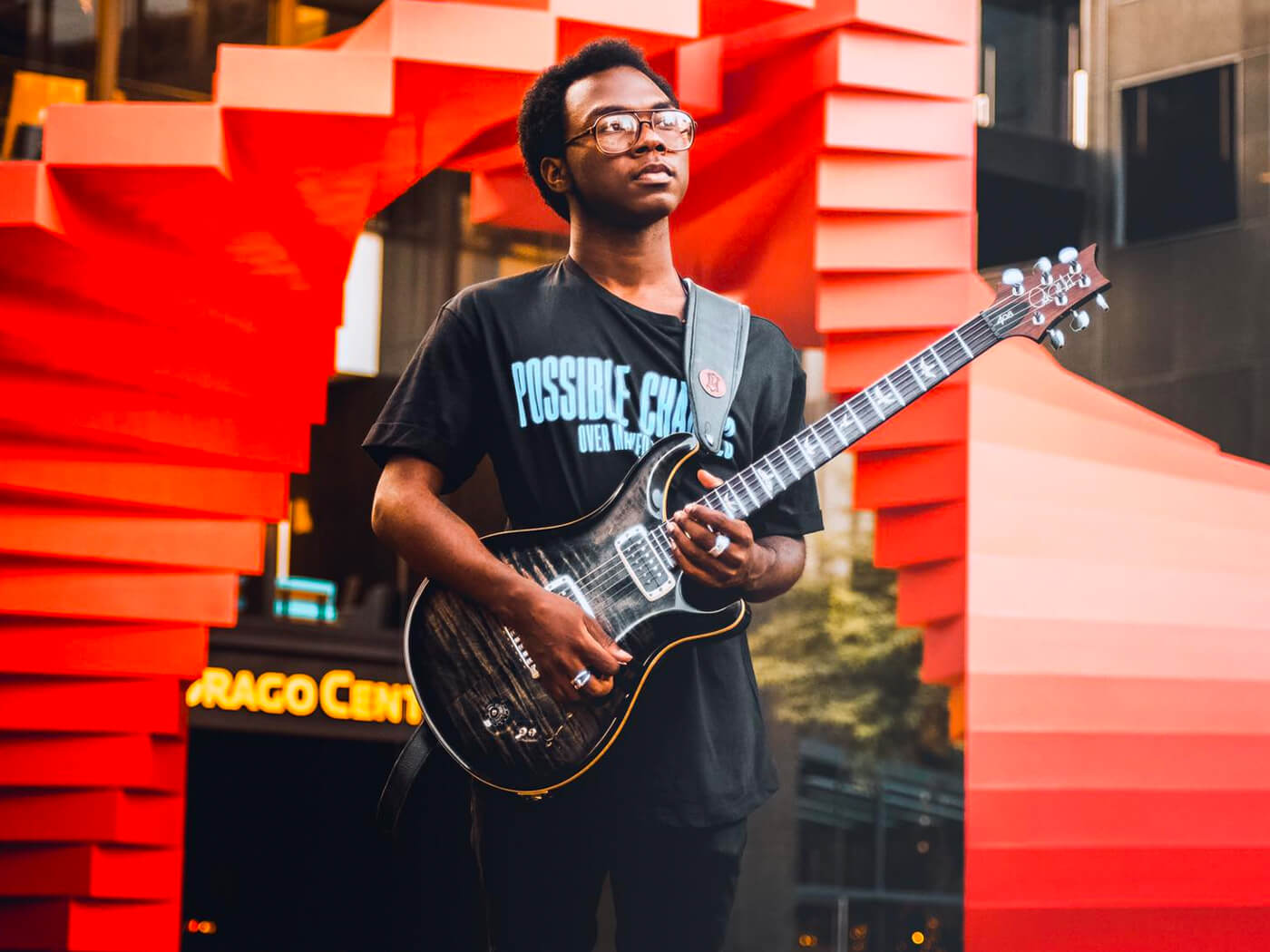 Who is Justus West?

In 2016, Justus West was a 17-year-old finalist at the Guitar Center Onstage With Vince Gill contest. Fast-forward four years, and he’s risen to become one of pop’s most sought-after guitarists and producers – and he’s ready to share his knowledge and chops at Guitar.com Live.

It was Gill himself who persuaded West to spread his musical wings and move to Nashville – which the Kansas City native did, at 18. The ensuing years were a whirlwind of gigs. First, around the Nashville scene with Gill, and then, on the road as guitar player for the late rapper Mac Miller.

When Miller played his acclaimed Tiny Desk Concert for NPR, both West and Thundercat were part of his band. A year later, the two reconvened to perform at Ty Dolla $ign’s Tiny Desk tribute to Miller.

West’s stature as a performer only grew from there. Before long, he was rubbing shoulders with giants, and his name began appearing on bills with Lalah Hathaway, Alex Isley and many more.

What’s he up to now?

Now based in Los Angeles, the guitar wunderkind is also a two-time Grammy-nominated producer to the stars, having worked with Alicia Keys, Mustard and Ariana Grande. One of his most endearing continued collaborations, however, is with songwriter Charmelle Cofield – otherwise known as his mum.

Cofield – who has penned tunes for Whitney Houston, Beyoncé and Kelly Rowland – has co-written some of her son’s material since 2016. On the flip side, West also produced – and, of course, played on – his mum’s latest EP, 2019’s Charmelle.

West has earned an eager online following and stays connected with fans on various social media platforms. Instagram and Facebook is where you’ll find him shedding the most, while subscribing to his Patreon page gives you access to a vault of video lessons.

Though his reputation as a hired gun is most associated with rap, hip-hop and soul, West is a musical chimera: his ability to nuance his playing around different genres is his most impressive skill.

It’s especially evident when you scroll through his Instagram videos. In one clip, he may be channelling the R&B sensibilities of Jairus Mozee, while in another, he might tear up the fretboard like instrumental wizard Tosin Abasi.

Speaking to Fender, West once said: “People always ask me ‘what is tastefulness?’ There are standard definitions; we could name players we think are tasteful, but then as you get to other genres, the definition kind of warps just a little bit.

“Jazz is not necessarily about speed, but if inherently jazz came out of a time when people were oppressed and all this stuff, bebop and all the speed, it came from frustration, it came from the language, so observing the genre you’re a part of is a big help.”

Both singles, This World and Cast Away, which West released this year put a spotlight on his production capabilities. This World, the latest collaborative effort from him and his mum involves the guitar as a production element.

West has admitted that he’s very particular about his guitars, and in his own words, is ‘anti guitar hoarding’.

“Every guitar has such a different personality,” he told Future x Sounds. “The problem with having a bunch [of guitars] is that you never get used to one. It’s like if you have 40 girlfriends, you’re just always going to be confused.”

That doesn’t mean that he’s a guitar monogamist, though. A few years ago, West seemed near-inseparable from his PRS guitars, often rocking either a 408 or a Custom 24 onstage and off. These days, however, it isn’t uncommon to see him with a blue Fender American Ultra Stratocaster, and even an Abasi Concepts Larada 6.

As for amplification, the guitarist plays a 50-watt Port City Amps Pearl Head, paired with a 1×12 OS Wave cabinet. He isn’t opposed to software amplifiers, such as the Archetype: Cory Wong collection from Neural DSP.

West is also a big fan of EarthQuaker Device pedals – in particular, the Afterneath, Avalanche Run and Levitation reverbs, as well as the Palisades overdrive.

Justus West will be leading his very own masterclass at Guitar.com Live, where he’ll delve deep into hip-hop, beats and how he approaches those genres with his six-string. It’s a rare opportunity for fans to learn more about how the young virtuoso ticks.

Guitar.com Live is a first-of-its-kind virtual guitar show set to take place across 2-4 October. Alongside West, heavyweights the likes of Joe Bonamassa, Kenny Wayne Shepherd and Angie Swan will appear at the event.