How a box-set binge turned me into a guitar detective

Like many of us, Michael James Adams found himself watching a lot of TV in the last few months – and one episode of Veronica Mars inspired him to become our very own guitar Columbo. 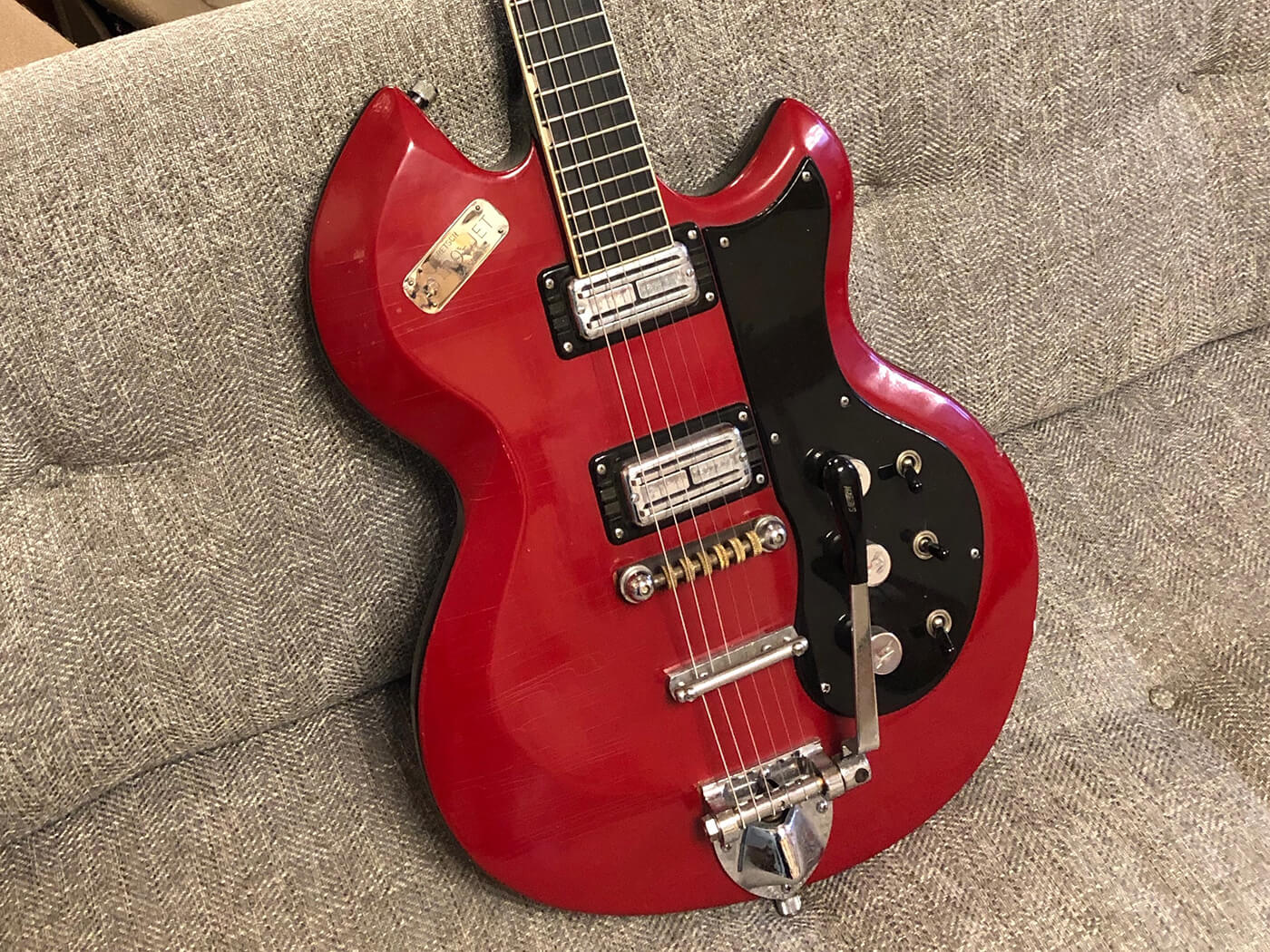 Like most of you, my family has been doing our part to help limit the spread of COVID-19 by spending a lot of time in home in the last few months. With our newfound lifestyle of isolation, we’ve been throwing ourselves into whatever creative ideas present themselves to stave off creeping boredom, including various cooking experiments, making parody songs about the times we’re in, organising virtual Shakespearean flash mobs, and hiding my 12-strong astromech droid figurine collection around the apartment in a sort of couple’s scavenger hunt which I suspect makes us seem hopelessly, upsettingly cute (we are).

While we may been busy, the truth is that we’ve also been catching up on movies and TV series we’d missed for whatever reason. Broad City, The Good Place, Schitt’s Creek, Inside No 9, and our third showing of The X-Files have all gone by fairly quickly. This brings me to the reason for this essay: the mid-2000s series Veronica Mars.

Veronica Mars follows the adventures of the titular teenage private eye who seeks to uncover the truth surrounding the mysterious death of her best friend while taking on odd jobs in the familiar whodunnit style. It’s a great show, and with all of the extra time on our hands, we’ve devoured all that is Veronica thanks to our Hulu subscription. 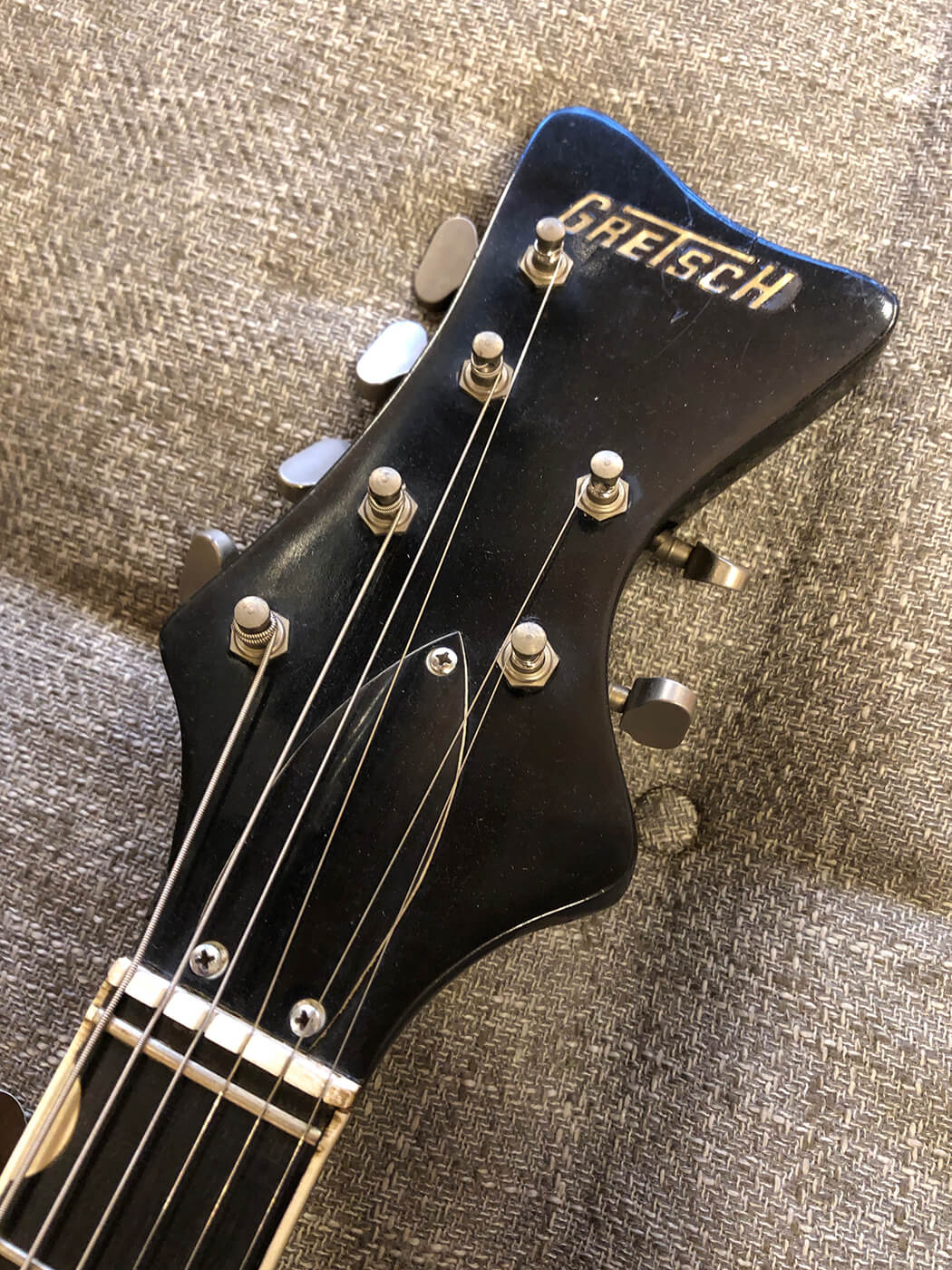 Without spoiling too much, I’ll call your attention to the Season 3 opener Welcome Wagon, in which we follow Veronica as she acclimates to life at Hearst College. She attends her first day of class, catches up with a few classmates from high school, and reconnects with her close friend and part-time assistant Wallace, whose new roommate has just been robbed while moving into the dorm.

Freshly relieved of his worldly possessions, Stosh Piznarski, who inexplicably prefers to be called “Piz,” turns to Veronica in hopes of their recovery. Among his missing items is a vintage guitar, and an interesting one at that. Hold onto your butts because we’re about to fact check Veronica Mars. 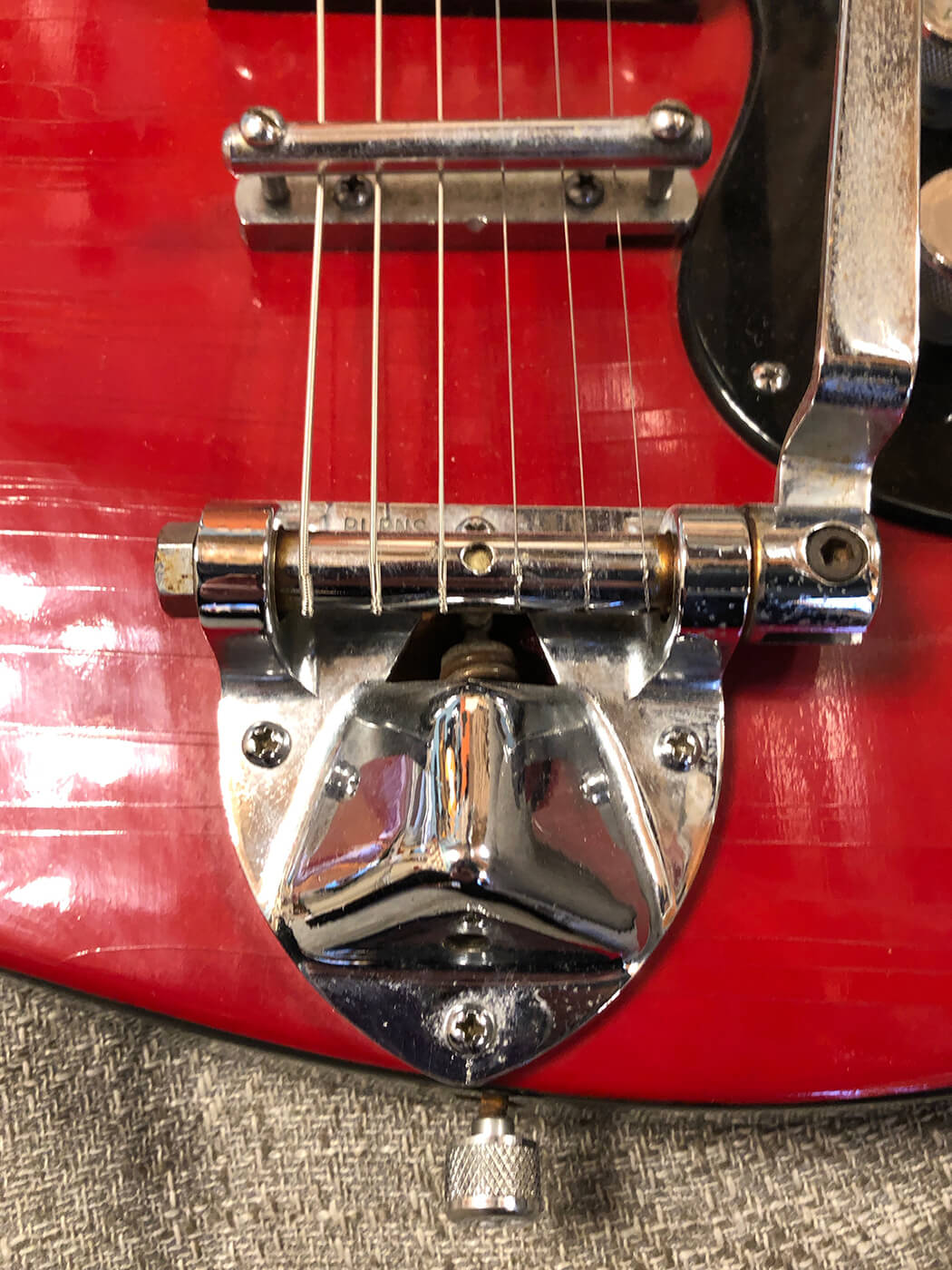 As Veronica lists off his missing personal effects – clothes, a computer, and a guitar – Piz cuts her off.

“Not just any guitar, okay? It’s a 1967 Gretsch Astro Jet Red top. It’s like the holy grail of guitars. I spent two summers mowing lawns just to earn enough to buy it.”

Kudos to the writers because the guitar we’re dealing with is indeed a mid-to-late 60s Gretsch 6126 Astro Jet. This oddball entry in the Gretsch line was designed by guitarist and Gretsch idea man Jimmie Webster, a proponent of the tapping and hammer-on playing style he dubbed ‘The Touch System’ decades prior to its popularisation by Eddie Van Halen. It was Webster who brought us the Space Control bridge, Orange 6120s, and the classy thumbnail fretboard markers.

The model departs from familiar Gretsch appointments with its asymmetrical, double-cut mahogany body which came standard with a Red Top finish and black back and sides. Mated to the body is a 24.5” scale length mahogany neck which wears a unique, wavy 4+2 headstock design with an ebony fretboard with classic thumbnail inlays. 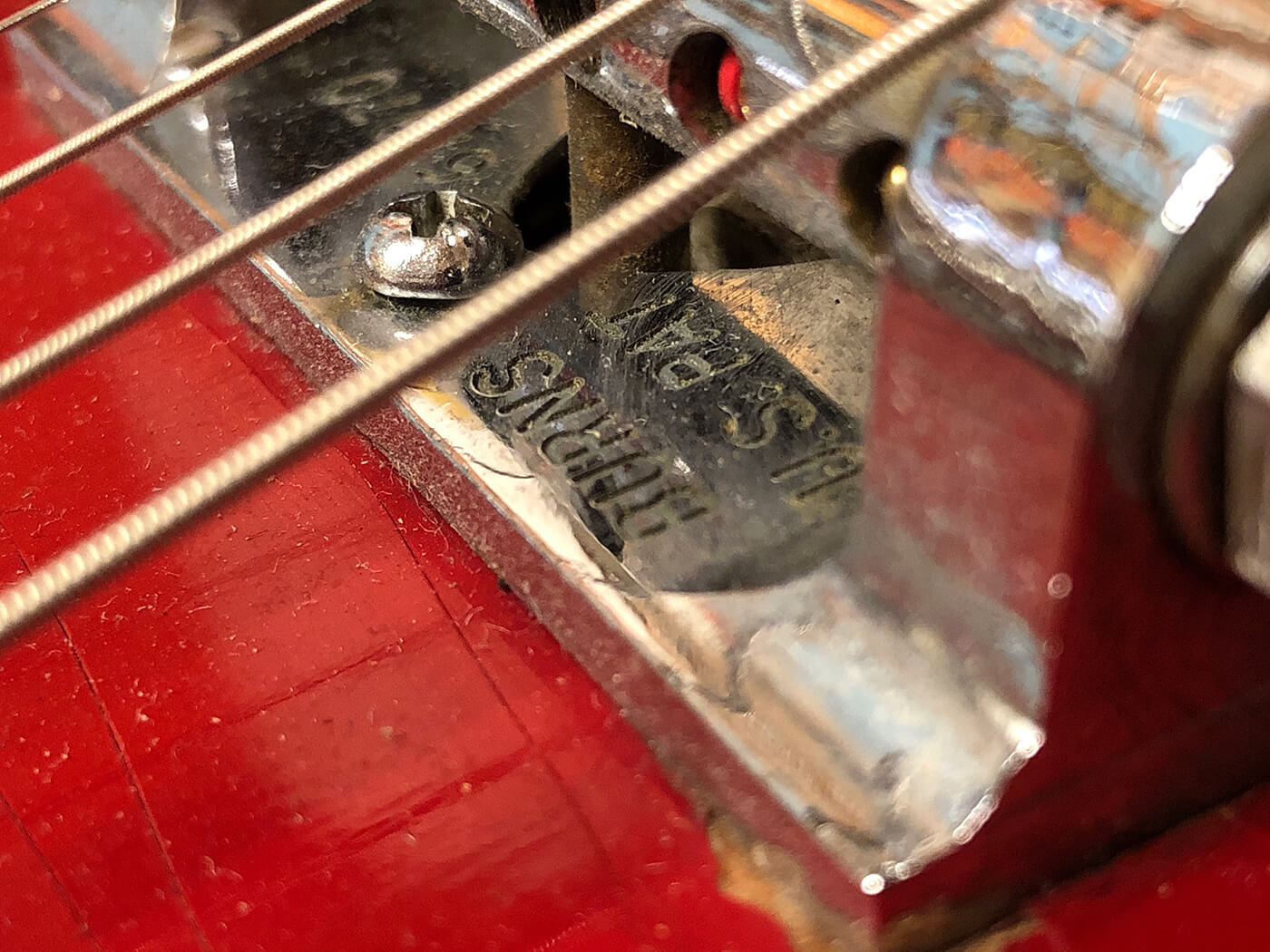 The Astro Jet also featured hot-for-the-era DeArmond Super-Tron pickups, the Space Control bridge, and a Burns Boomerang vibrato with its distinctive gear shit arm tip. The guitars generally end up on the heavier side of the spectrum, with most documented examples clocking in between 9 and 12 lbs.

On standard models the control scheme includes three volume knobs: neck pickup, bridge pickup, and Master. Beneath them are three toggle switches including one for pickup selection, another for the Gretsch tone filter system, and curiously a three way on/off/on standby switch as found on the Chet Atkins Country Gentleman and other models. 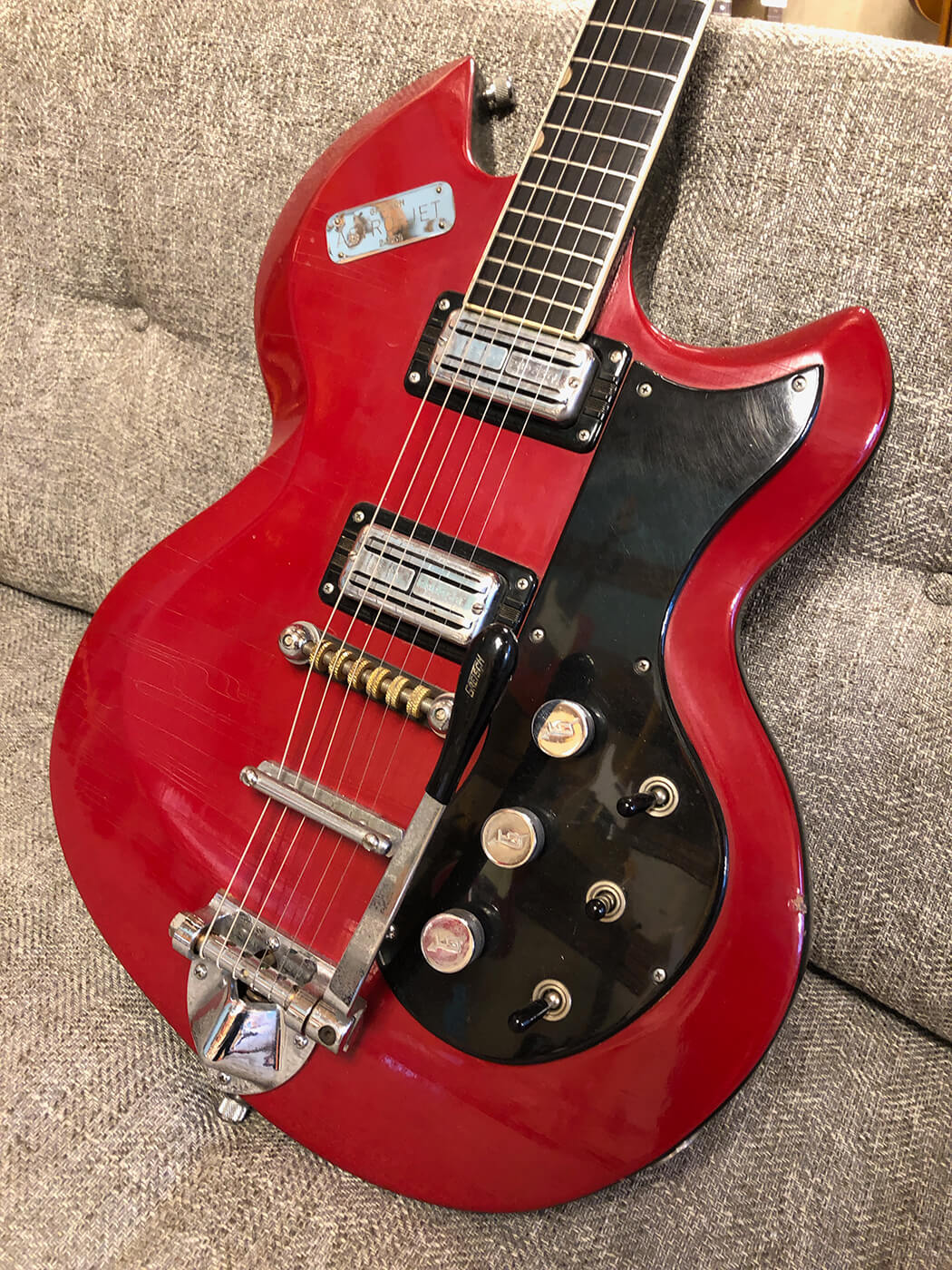 Curiously, when we finally see Piz’s guitar, it’s revealed to be an even rarer variation of the Astro-Jet which includes a built-in treble booster/fuzz circuit which adds a fourth knob and a pickguard extension, both of which are dead giveaways for the option. It also retains its original case, which we all know can command a premium on top of the guitar itself.

Assuming that Piz has the year correct, it was perhaps one of the last Astro Jets that left the factory; the model would be absent from the catalogue the very next year. This accounts for its rarity, but as we all know, ‘rare’ isn’t always synonymous with ‘desirable.’ 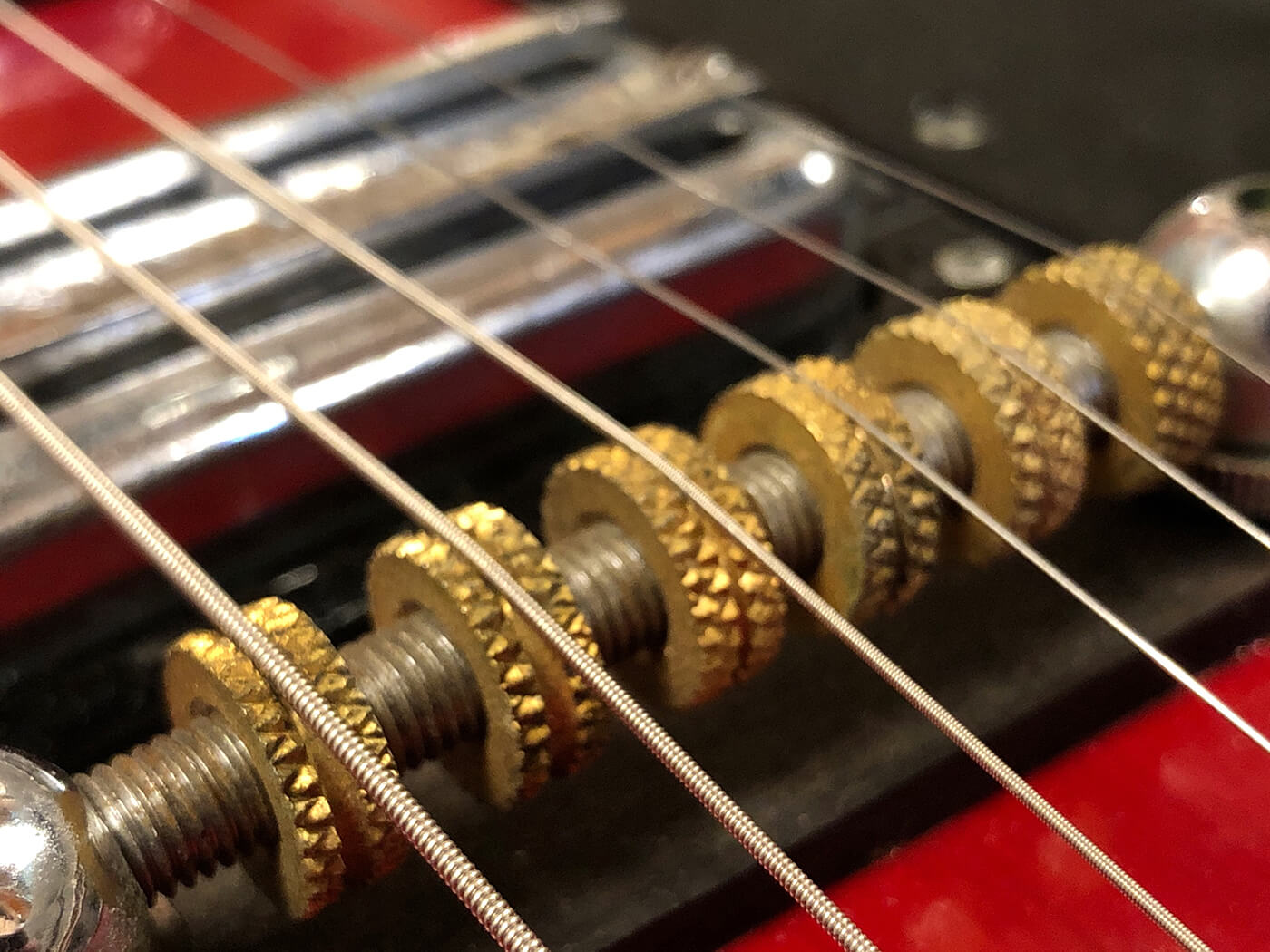 In the dialogue, Piz refers to the Astro Jet as “the Holy Grail of guitars,” and predictably, this just doesn’t pass muster. Not today, not when the episode originally aired in October of 2006, and certainly not when the 6126 was introduced. If pressed, I think the majority of us would agree that a ’58 or ’59 Les Paul Standard would more readily fit the definition of a so-called ‘holy grail’ while this obscure Gretsch solid body would not. An interesting instrument? Sure! A holy grail? That doesn’t quite add up.

Later in the episode, Veronica tracks down Piz’s guitar through Craigslist, and when they show up to view the guitar, its current owner claims to have purchased it at a flea market for a mere $500. “You won’t find one of these for under five grand,” he tells them. “I’d be willing to let it go for four.”

Now, why the writers picked such an astronomical (ahem) number is anyone’s guess. It’s conceivable that if you’re going to give grail status to an object, then it ought to have an impressive price. Or, maybe it’s intentionally high to showcase the seller’s inflated sense of the guitar’s value. It could even be an example of the common negotiation tactic of starting high and being willing to “come down” to a more reasonable and predicted price.

In any case, he is wildly incorrect. At the time of its release, the Astro Jet was a high-end model with an equally high-end price of $325, comparable to the $330 tag of the already proven Gibson SG Standard, which the Jet seems purpose-made to compete with thanks to its solid mahogany construction, pointy cutaways, and red finish.

When this episode aired, the estimated value of a well-kept Astro Jet wasn’t anywhere near what the show claims. How do I know this? Because, Dear Reader, I picked up a copy of the 2005 Vintage Guitar Price Guide – a whopping $9 out of my own pocket – in the interest of thorough and correct research. You’re welcome.

So, what does the 2005 Price Guide tell us? Astro Jets from 1967 in excellent condition were reported to fetch only $1,200-1,500 during that year, which is a far cry from the value the fictional seller places upon Piz’s stolen item. Of course, the vintage guitar market wasn’t quite then what it is now, so one might expect the price has accrued since then, and it has but not by much. Currently, buyers looking for one of these should expect to pay between $1,600 and $2,150, depending on condition. For context, in 2005 the ’58-59 Les Paul Standard carries a suggested retail price of $210,000-250,000. 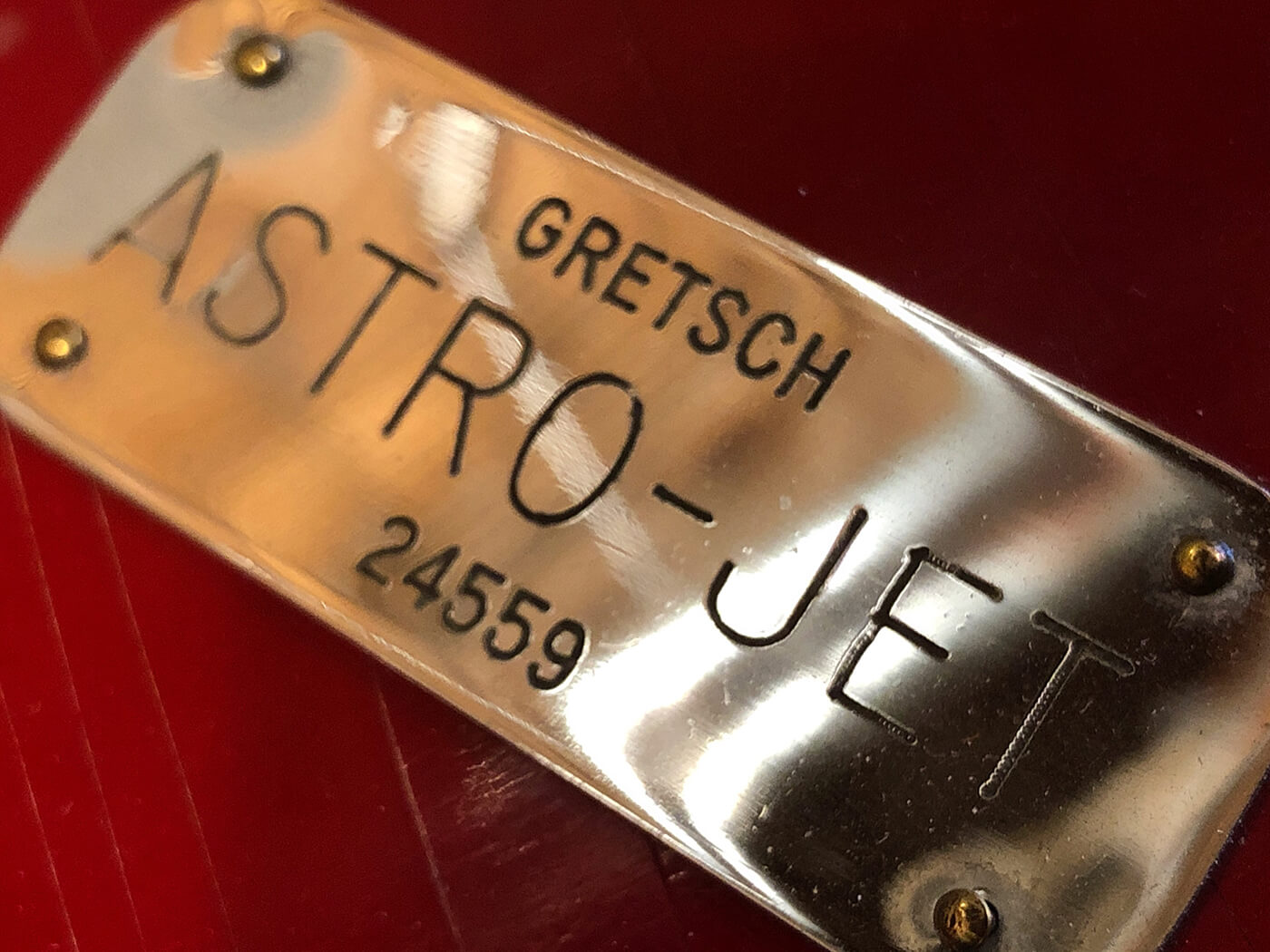 All of this is a fun and distracting thought experiment, but I also wanted to give some real-world impressions of the 6126. Thankfully, I was able to track one down in Seattle some time ago while visiting Mike & Mike’s Guitar Bar.

First, I’ll say that the guitar is heavy in every sense of the word; the sheer weight of this exaggerated body shape made it a tough sell from the first moment I picked it up, but what it lacked in comfort on a strap it more than made up for with rich, era-aggressive tones from its surprisingly loud Super’Tron pickups.

Weight aside, the guitar was a hell of a lot of fun to play. The body may not have followed traditional Gretsch specs, but the neck was as comfortable as ever, filling my palm but never feeling unwieldy. While you may know me as a disciple of the Jazzmaster, there are a number of other vibratos that I really enjoy, and this Burns unit is one of them. It’s a little quirky and less sensitive, but it ends up feeling like a cross between a Bigsby and a Hagstrom Tremar. Fluttery, wacky, and best of all, stable. 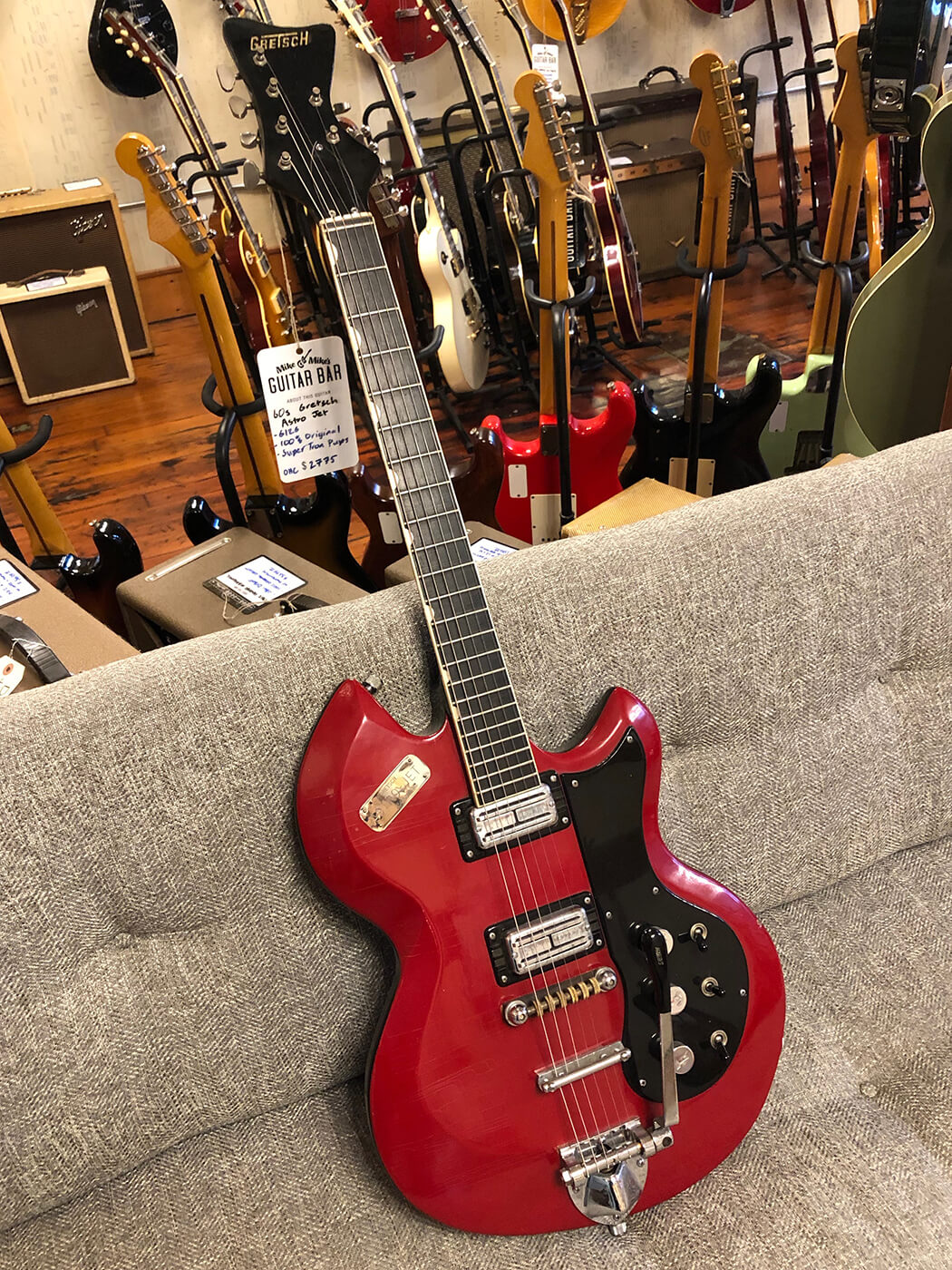 Plugged into a Mesa/Boogie Mark I reissue, the guitar handled clean tones just as well as absurdly overdriven ones, and with both channel volumes cranked I was easily in grunge territory. The controls became second nature after a few moments of careful study – all of their functions unmarked – and soon I was able to dial in whatever sounds my heart desired.

I genuinely enjoyed my time with the 6126 Astro Jet, and while it may not be the holy grail as described by Piz, it’s still well worth your consideration should you be in the mood for something off the beaten Gretsch path. If a more budget-friendly price point is required, Eastwood Guitars offered a reissue of this model back in 2013, so do keep an eye out for that.

Stay safe, healthy, and happy out there, friends. Easy as it might be to let cynicism take hold, do try to keep a hopeful light burning in your hearts and I’ll do the same.
Now, back to my bi-annual viewing of Star Trek: The Next Generation.