Head honcho Henry Widjaja tells us how the boutique pedal brand from Jakarta, Indonesia got its start.

Jakarta’s boutique pedal scene may not be massive – in fact, there are only a couple of players in the game – but that did not deter Henry Widjaja from pursuing his passion. Ten years ago, the former university lecturer quit his day job and went all in on GFI System, a solo boutique effects pedal venture.

Countless spools of solder later, Widjaja’s operation has made multiple NAMM pilgrimages, and now has a full roster of well-loved stompboxes. GFI System kicked things off with a humble Tube Screamer clone, but is now well-known for its spectacular DSP-based effects units. Guitar.com recently sat down with Widjaja to find out how GFI System made it to the big league, what we can expect from the brand in 2020, and what the pedal industry in Indonesia is like.

When did you first get interested in guitars and effects pedals?

“I started playing guitar in high school. I started with classical music, and then after a while formed a band and started playing rock. That’s when I got into electric guitars and pedals.”

Tell us the story behind GFI System.

“When I was in college, I was really into guitar. I was not much of a player, but I really had a deep interest in the guitar technology and audio engineering in general. I had a soft spot for pedals in particular. I thought they were wonderful little devices. So, I collected a bunch of them, opened them up, modified the circuitry, and put them back together again. And at the time, I envisioned myself starting a company, designing and building products on my own.

“It was not until 2010 that I finally decided to make it a reality. Before that, I was teaching at a university. After a couple of years [at that job], I decided it was really not for me [laughs]. In early 2016, my ex-roommate, Jonas, and his brother, Jesse, joined GFI System to help me with the marketing and business side of things, while I focused on the research and development.” 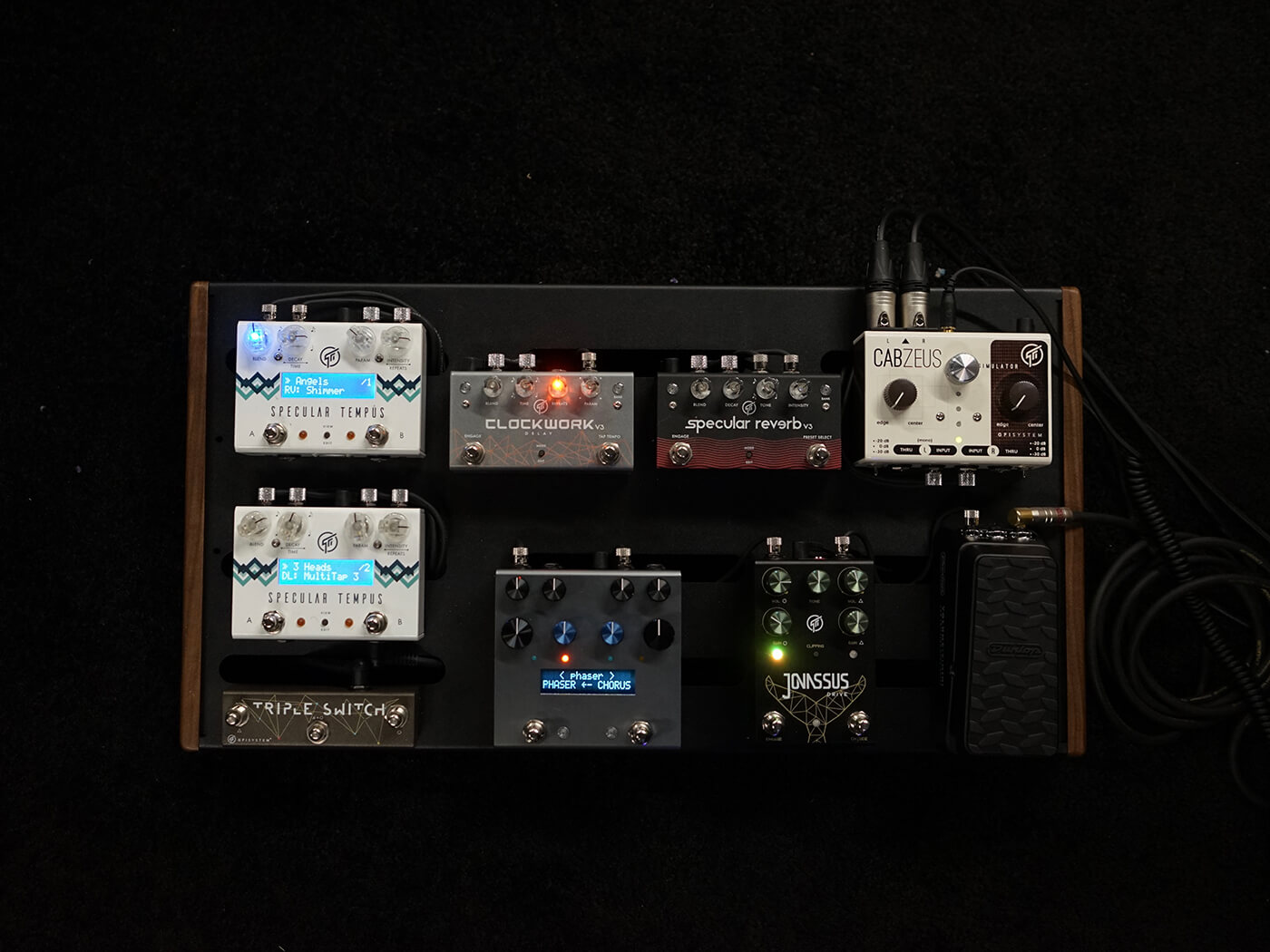 Tell us more about how – and why – you started tinkering with pedals.

“I studied electrical engineering at Boston University, specialising in signal processing. Soon after, I began applying what I learned in school to my music hobby as well. This includes, like I mentioned earlier, opening pedals up and tinkering with them.”

Weren’t you afraid of breaking your pedals? They must’ve been difficult to come by as a student.

“Actually, I think I broke a lot of them! [laughs] But it’s the price of experimenting with effects.”

Did you learn to fix pedals?

“Oh yes! Actually, what I did most of the time when I first started this company. Friends and customers would bring pedals to me to get them fixed or modified, etc.”

When did you realise this ‘hobby’ was something you could do professionally?

“In 2010, I quit my teaching job and tried to find opportunities in the city. I decided I was going to build pedals, and from there it was pretty much make or break. In 2013, I realised that GFI’s pedals were selling and I wouldn’t be able to go it alone for much longer. It’d take a lot of energy to handle marketing and all of that, so that’s when I got Jonas to join me.”

Tell us how you started designing GFI’s pedals.

“My first pedal, like many other brands, was an overdrive pedal. Mine was called the Bluescaster – based on Ibanez TS9 Tube Screamer, but I put my own spin on it. I added a booster in it, so it’s actually two pedals in one. It has an overdrive side, and then a booster side. And they can both operate independently. So, you turn off the overdrive and still have the booster for a clean boost effect.”

So what was the reception when you first put out that pedal?

“To be honest, it was actually slow because I didn’t have any recognition at the time. Nobody knew the brand, so I just put it online and see if anyone was interested. Some people bought it though, and they liked it.”

So how did its popularity pick up?

“It actually didn’t! [laughs] Soon after that I began developing DSP-based effects. I started creating reverb, delay and modulation pedals. Those pedals got pretty popular.

“My first reverb pedal was called the Specular Reverb. It has three sounds: Regular reverb, reverb with doppler, and reverb with atmosphere. It became quite popular, and I developed the second version with an improved circuit. It’s the one pedal that really encouraged me to pursue this passion further. It’s one of my all-time bestsellers.”

So how did that idea come along?

“There are a few pedal builders in Jakarta, but I’m not sure how many of them are really serious about it. By that, I mean making it their full-time business. Fmpedals, run by Mr Ivan, is another popular builder. When I started doing this, there was only one other guy, that I know of, who was building boutique pedals in a workshop. KS Tone workshop, it was called. It’s no longer around, I don’t think.”

Do you look up to any other builders?

What do you think about the current state of the boutique pedal market?

“It’s definitely a much bigger scene than when I first started. I think that’s because it’s not too hard to get into the business now. Maybe it’s harder to maintain it, what with the competition and all. But there are definitely many more players in the boutique market now. Unfortunately, that also means prices have been going up.”

“I think my proudest moment was when I finally managed to get to NAMM. That was in 2016. I went to Anaheim not expecting much because I was largely unknown. But the reception ended up being pretty good, and a lot of people showed interest in the pedals. So that was pretty exciting.”

What is the biggest challenge you’ve faced in building pedals?

“The biggest challenge was getting raw materials. Actually, the challenge is ongoing. I have to import 98 per cent of the materials I use, and they come from Taiwan, China and the United States.

“Another challenge I faced was the lack of support for the creative industry in Indonesia. For example, when I was trying to find a workshop that could manufacture an enclosure for the pedals, none of them could do it here. Most of the workshops here are outfitted for heavy industry. So I needed to outsource that part of the business to Taiwan.”

What are some challenges you foresee for 2020?

“The biggest challenge is probably for me to stay ahead of the competition because in the DSP scene, everyone is really innovative. Companies are constantly coming up with new stuff, new sounds, so I need to keep abreast of the latest developments and keep innovating.”

Any particular plans for the future?

“For 2020, I’m planning to design more advanced and versatile models of the pedals we currently offer – especially the Cabzeus, Specular Reverb and Clockwork Delay. I’ve got a lot of requests for those already, actually.”