Formed in Southampton, Band Of Skulls have become a formidable hard-rocking trio, releasing fourth album By Default last year. We catch up with the band as they prepare to tour the US and Canada. 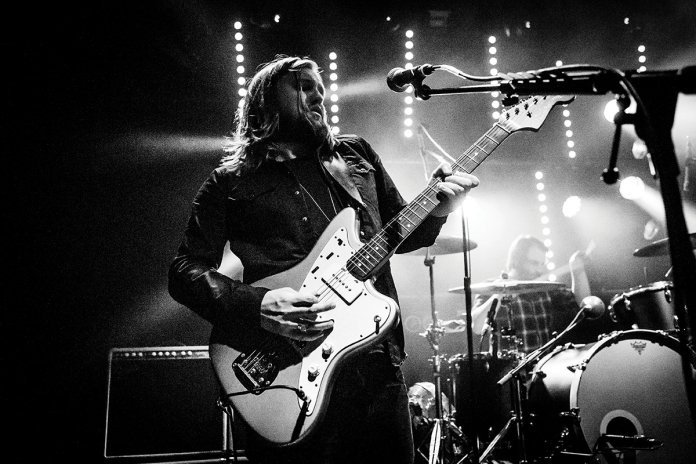 As a power trio, Band Of Skulls have been together for over 12 years, with Russell Marsden and drummer Matt Hayward first meeting at school almost 20 years ago, later drafting in Emma Richardson on bass. After making a major impression on the festival circuit last summer, completing an extensive tour of Canada and the USA and releasing fourth album By Default, it’s fair to say that 2016 was a productive year for the band.

Speaking to G&B before setting off for the states, Marsden says: “We toured with the new songs in the UK and Europe and are now ready to promote this album in the USA and Canada. We have a big following stateside, so it’s going to be a thrill to get back out there and play rock ’n’ roll to the Americans, which is always a rewarding challenge. We have a lot of new material for them this time and are playing in bigger venues.

We decided a long time ago that as a three-piece, we needed to sound as big as possible and use our vocals and harmonies to the full effect. I think this is an area that’s massively under-used today. We grew up listening to bands when it was all about the vocals – The Beatles, Pink Floyd and even Motown. We’ve been singing together for so long now we can do it off the cuff. We might be rehearsing a new song and Emma may naturally take the lead and I’ll just find a harmony, or vice versa, and when it clicks in you get this next level of emotion.

“There’s no dead wood in this band, we all sing and are carefully filling in any gaps to make the sound as big as possible,” says Richardson. “We also worked on how to counteract the inevitable hole that appears when Russell steps the guitar up to take a solo. I use Fender Bassman and Ampeg heads with 8×10 cabs, which have no trouble filling out the low end, but I’m also using an Electro-Harmonix POG2. This separate feed is routed back on stage through a Fender Blues DeVille combo.

I only have it as a subtle effect, just enough to keep the rhythm section rocking. “The whole power-trio sound has been a challenge for us from the start, and it pushes the band to be more creative musically and within our songwriting. There is an artistic licence that allows us to add a few extras in the studio, but not to a point where we couldn’t reproduce anything live.”

“For Band Of Skulls, it’s a case of keeping it as simple as possible,” says Marsden, “which allows us to express our own individual characters through the instruments and maintain the band’s energy on stage – particularly Matt, he’s a stylish yet such a hard-hitting drummer. You can almost feel the air pressure change when he kicks in – his playing is equal throughout, so I don’t have to fill in with guitar work.”

Richardson, Marsden and Hayward [who it was announced had left the band after this interview with G&B] are all fine guitarists in their own right, which proves invaluable when it comes to songwriting, as Richardson explains: “It’s cool that we all play guitar, so we’ll sit around with a stripped-down acoustic session jiggling riffs and ideas.

It’s usually the best idea that wins, then we can start a structure within the delivery of the lyrics, irrespective of a male or female taking the lead vocal and who has the best harmony on each track. We try and mix it up as much as we can. It may seem a long way round, but this way we can all have an input rather than having one songwriter in the band. Band Of Skulls has three songwriters. 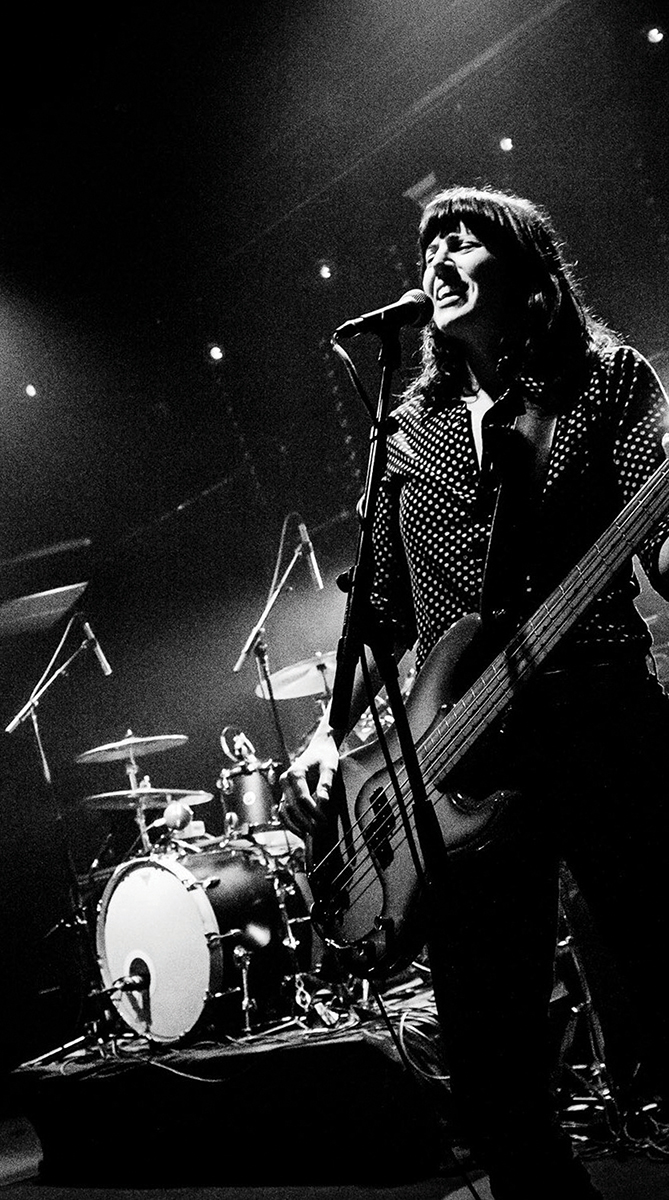 “We’ve learnt over the years that our best songs have been constructed from strong ideas,” says Marsden. “I might come in with a demo I’ve been working on, but it’ll be basic and not over-engineered, leaving plenty of headroom for the three of us to add our own input. That worked particularly well this time around with By Default.

“We are really pleased with this album, it portrays us again as a bluesy rock power trio, as did our first three albums, Baby Darling Doll Face Honey, Sweet Sour and Himalayan. This time, we’ve also drawn ideas from music that has influenced us over the years. It could be anything, even dance music, maybe music from the 40s and 50s, but what comes out at the end is still Band Of Skulls playing rock ’n’ roll.

It was recorded at Rockfield, and the first time we had worked with Gil Norton as producer, who has produced so many bands including Foo Figthers, Pixies, The Virginmarys and Patti Smith. We spent a lot of time on pre-production, rehearsing the songs, so we were fairly relaxed when we arrived, but we knew Gil was going to work us hard, and we are really pleased with the results.”

“I’m playing bass through necessity really,” Richardson laughs, “I was already in a band as rhythm guitarist and vocalist when Russell and Matt asked me along to try out some songs with them playing bass. It seemed to gel straightaway. I’m really comfortable playing bass and singing.

“I’ve tried a lot of bass guitars, but I just keep coming back to a Fender Precision, which works for me in every department, from the weight, the balance and the way they hang on the shoulder. They just suit my style and have the perfect sound for the band, and they’ll handle all the knocks I give them on tour.

“I have several now, two of which are main stage and studio basses, a sunburst with a rosewood fingerboard which was my first serious bass, and an Antigua finished model which, with a maple fingerboard, notably has more growl and a brighter attack. I rarely use a pick, just my fingers where I feel I’m more in control.”

“We’re a loud rock band,” explains Marsden, “and I have a big overdriven sound. I’ve been asked many times how we get such a rock sound from gear not really related to bluesy rock ’n’ roll. For me, it’s a fun journey pushing quality equipment to the limit, which helps to discover new tones and sounds from equipment not designed for a specific sound or purpose.

“I hear some people say nobody wants a guitar solo anymore, but it’s the top of the song for me and our audiences still love to hear my amps cranked and getting the treatment. I’m not into technical playing, I try to create my solos almost like a song with the song itself, and if the audience can sing it back with emotion I feel it’s a well-constructed solo.
It has to be vocal, a guitar solo could be a chorus or vice versa. I also feel there’s a danger of having far too much gear. Both myself and Emma have experimented with big rigs and large pedalboards, but we seemed to keep reverting back to a version of what we had before and are masters of.”

Guitar spotters will have noticed that Marsden is back to using his tried-and-tested Jazzmasters again on recent tours. He explains: “I leant towards Gretsch guitars for a while, using several models, including a White Falcon. They all sounded really good recorded and live, but my Jazzmasters kept calling me back. I have several, all now loaded with Monty’s pickups. These include their custom Wide Range PAFs, low-output custom Jazzmaster units and P-90 vintage models tweaked for me. The good old Jazzmaster has always been my bread and butter, my gold USA ’62 reissue is all over the new album. 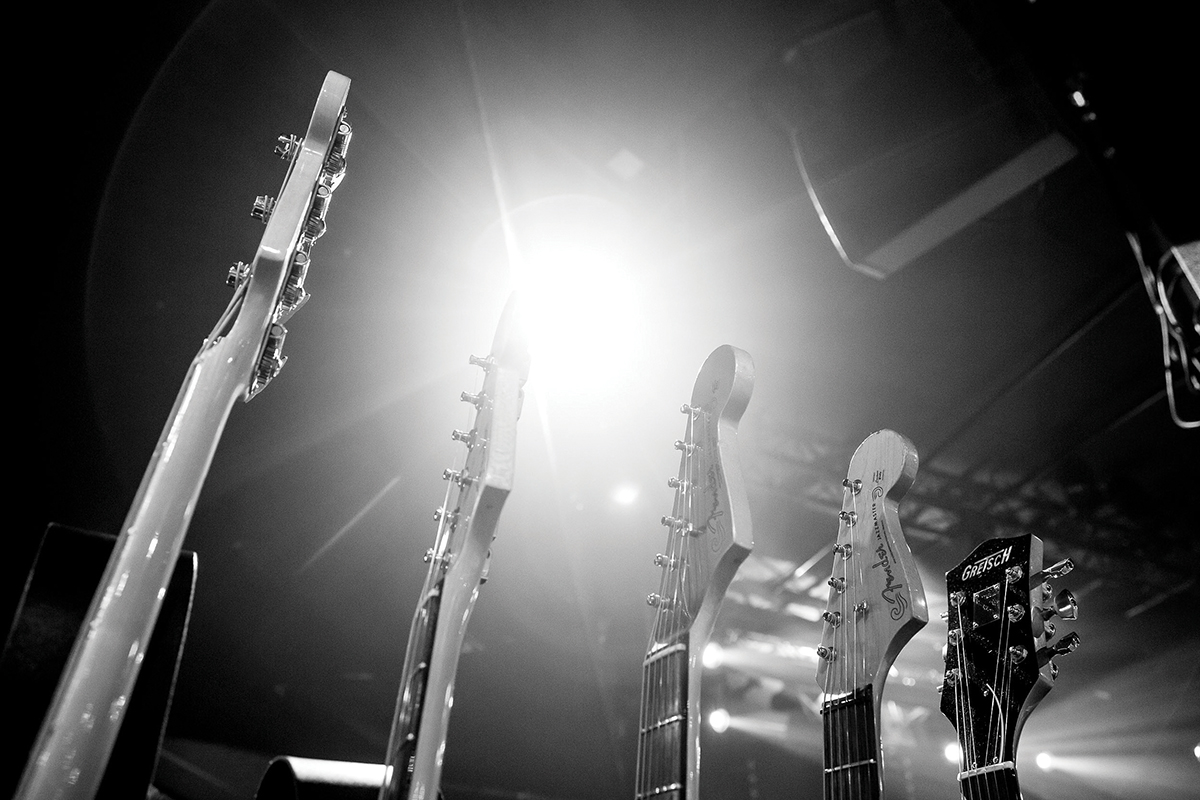 “You can hear that unmistakable aggressive Jazzmaster attack on the intro to a song called Bodies. It’s the sound that got me hooked on the Jazzmaster way back. We were halfway through recording a track on By Default that Emma sings, called So Good, when I just thought this song was crying out for a Tele. So I bought a black model with a Bigsby with a rosewood fingerboard, which will probably get used live as well.

I am a bit of a tweaker, so I might customise it soon. “My rig is always ongoing, although with just enough technology so it all works, but not too much that I feel detached. I’ve been using a pair of Fender Vibro-Kings, which I think are more of a British-sounding Fender.

“There’s a lot of Fender top end and I’m running both with an extension cab, each loaded with a pair of 12s which take it to a different dimension by adding meaty, punchy mids and lows. It’s a big 3D sound.

“I have one of the extension cabs fitted with the new SAM Systems internal mic units, which works really well. I’m currently using it live, mixing it alongside the conventional mic-on-a-stand method. These amps are extremely loud after 3, they deliver natural overdrive and compression, but if I need a little more I’ll kick in a pedal.”

In an era where it’s increasingly difficult for guitar bands to find their way in a fragmented market, with physical CD sales dwindling, pressure from record labels and live venues disappearing from our cities’ streets, the band are grateful for what they’ve acheived. “I’d say Band Of Skulls is a rare thing,” says Marsden.

“We were lucky to be able to write our own songs and go on to make a career from it, which I feel is happening less and less these days. You could argue that the cream rises to the top, or if you really want it you’ll go out and get it, but it’s difficult now. I would say, though, if you can play, people will want to come and see you live, the excitement of a live experience will never go away.”