Country-rock crossover artist? Outlaw country star? Call him what you will, Eric Church has made hay with a commercial sound that’s a huge draw Stateside. G&B finds out what makes him tick… 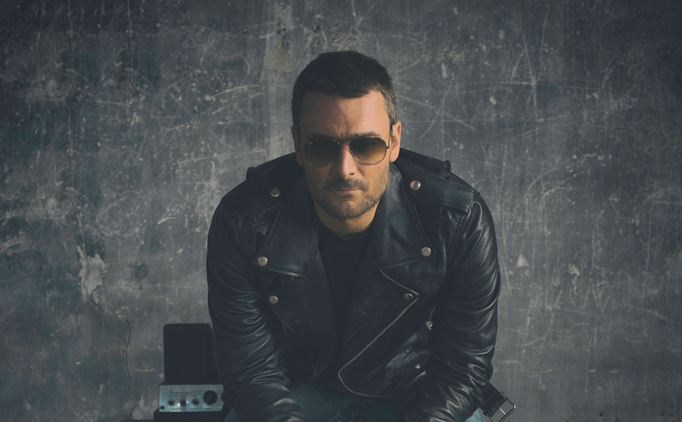 Although rock ’n’ roll may not be as all-conquering as once it was, any rumours of its demise are somewhat premature. Across the pond in the USA, it’s been undergoing a paradigm shift; ‘country’ artists such as Florida Georgia Line, Jason Aldean and Luke Bryan are stepping into the breach once inhabited by straight-ahead rock musicians, drawing massive audiences with their rock-centric riffing and edgy lyrics.

The biggest and perhaps the most noteworthy of these stars from a guitar perspective is Eric Church: a bona fide superstar Stateside, who sells out stadiums and, along with his band the Outsiders, regularly debuts in the number one spot on the Billboard charts. Something that’s not the norm for country acts.

Church’s music has been dubbed ‘outlaw country’, and with his lyrics about weed, whiskey and the woes of life on the road, set against hard-rocking riffs, it’s possible that this form of country is the new rock ’n’ roll. Experiencing Church and The Outsiders live, we witness a towering Marshall backline and a guitar assault that seduces even the hardest rockers among the audience.

Church has released five highly commercial and critically-praised albums. His music is deeply rooted in guitars and his passion for the instrument is palpable when G&B catches up with him prior to his headline set at the Country To Country Festival. 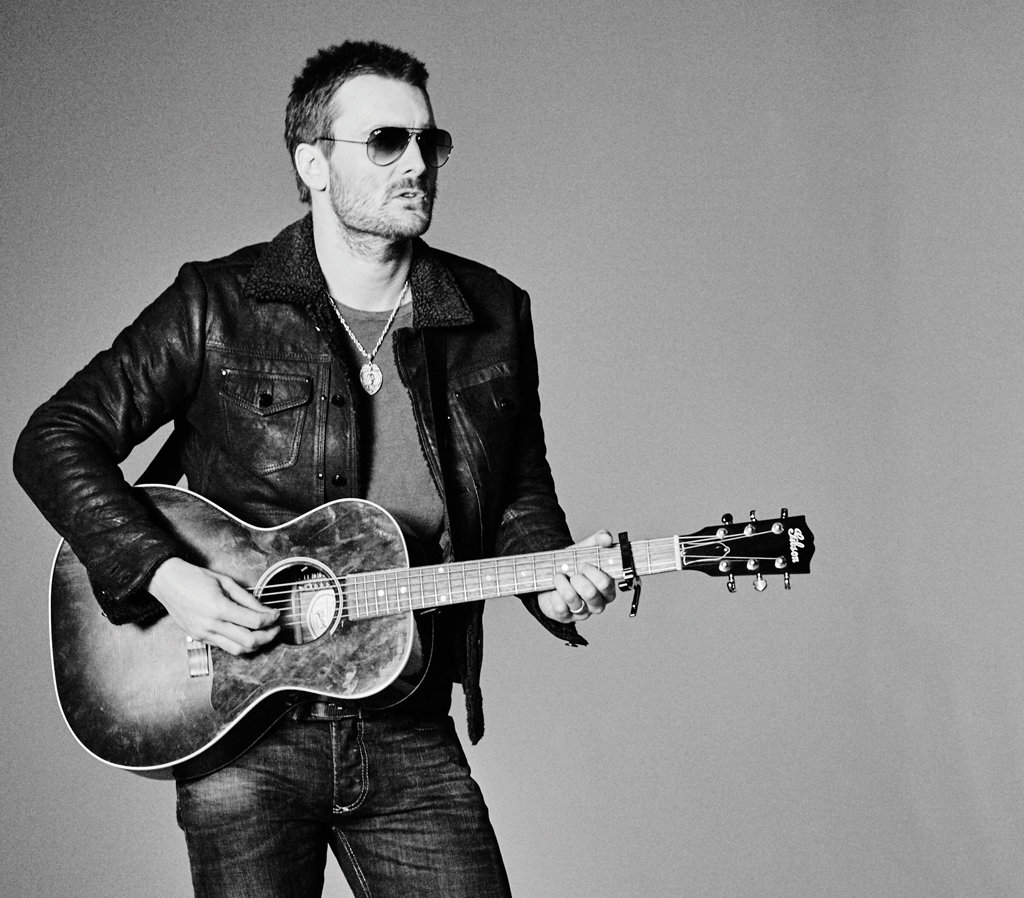 Softly spoken and relaxed, you’d barely know Church is a country music star but for his signature shades. Beyond the southern gentility there also lurks the soul of a rebel. he, like others before him, has alienated the conservative Nashville music brigade with his raucous guitars, defiant streak and innuendo-laden lyrics, all which serve only to endear him to his millions of fans. He even once intervened to prevent a security guard from throwing a woman out of one of his shows.

Church grew up in the picturesque town of Granite Falls, North Carolina, where he was both his high school’s valedictorian and basketball star. When not shooting hoops or studying, Church was living for music as a self-taught guitarist who preferred songwriting to socialising. He listened to The Band, Little Feat’s Lowell George and, naturally enough, The Boss [his single, Springsteen, is essentially a fan letter to Bruce]. Besides those influences, his other inspirations are eclectic.

“My biggest influence is probably one of the most underrated guitarists ever – Jerry Garcia,” he explains in a subtle Southern drawl. “Not just with the Dead, but I’m also a fan of what he did in the Jerry Garcia Band circa Old And In The Way era. Besides rock guitars, I’m a fan of guitars in more of a jazz styling and jazz influences, and Garcia was definitely a guy who incorporated that.

“Plus I’m a fan of unique flatpickers like Tony Rice,” he continues, “so much so that I learnt every single note of the song he did with [mandolinist] David Grisman,  Russian Lullaby. Rice is simply one of the finest flatpickers ever. Same with Doc Watson. I grew up in the Appalachian mountains, where we heard folk, Bluegrass and Americana on our front porches.From that, I taught myself to play.” 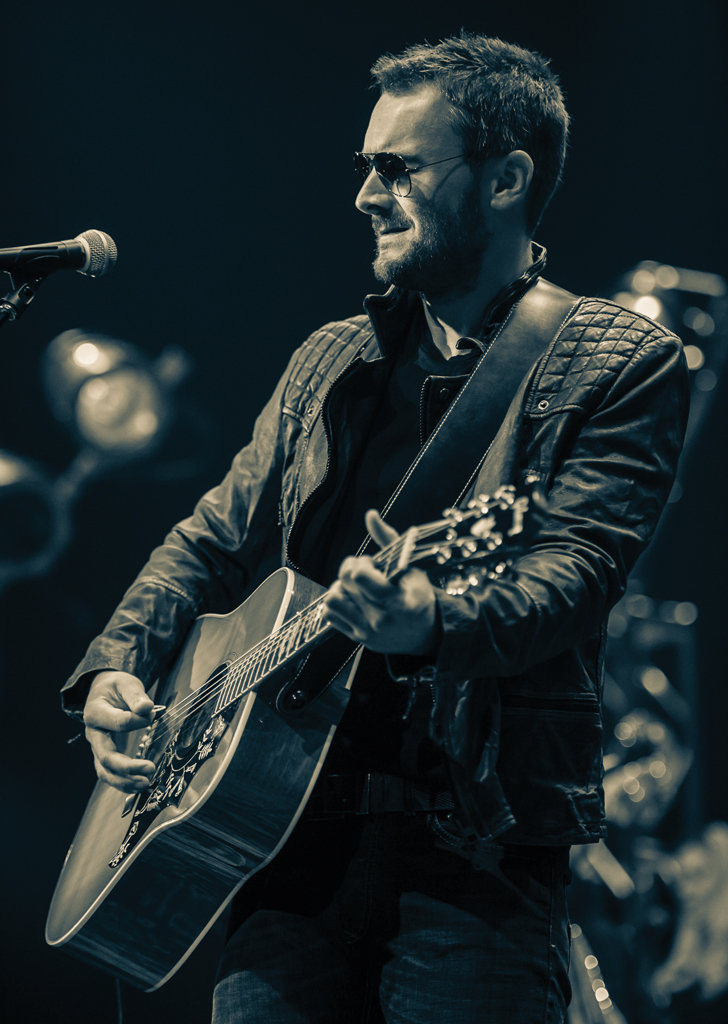 In the Bluegrass tradition, Church is schooled in a variety of instruments, including banjo and mandolin. “I grew up playing a host of instruments, but guitar is my weapon of choice,” he says, “and it’s my writing tool.”

Speaking of songwriting, Church is legendarily prolific in that regard, having churned out 100 songs for what became his latest album, 2015’s Mr. Misunderstood. He explains that the songwriting muse is not always that generous, with that batch of songs coming to him in an unprovoked creative flash that he wisely exploited.

“Normally with songwriting, I’ll take my time, try to separate myself from home and family distractions. But this album was totally unplanned and it was different, as the songs came to me so fast that I wrote one song, which immediately led to another and then another and so on. It was almost embarrassing that they came to me like they did, and I felt I was losing my mind at one point getting all of these songs coming through me – and they felt like the best songs of my career, too.”

Mr. Misunderstood was released late last year with a giveaway to fans of 80,000 vinyl albums with no accompanying fanfare, nor interviews. “The songwriting spigot was turned on full blast and the songs spilt out for a reason I’ll never know why, and no one expected an album at the time,” Church recalls. “Rather than putting it on a shelf to fire up the promotion machine, we just dropped it out there. We kept it a secret until the day it came out. In order to do that secretly, without any publicity, we had to buy our own record processing factory in Germany.” 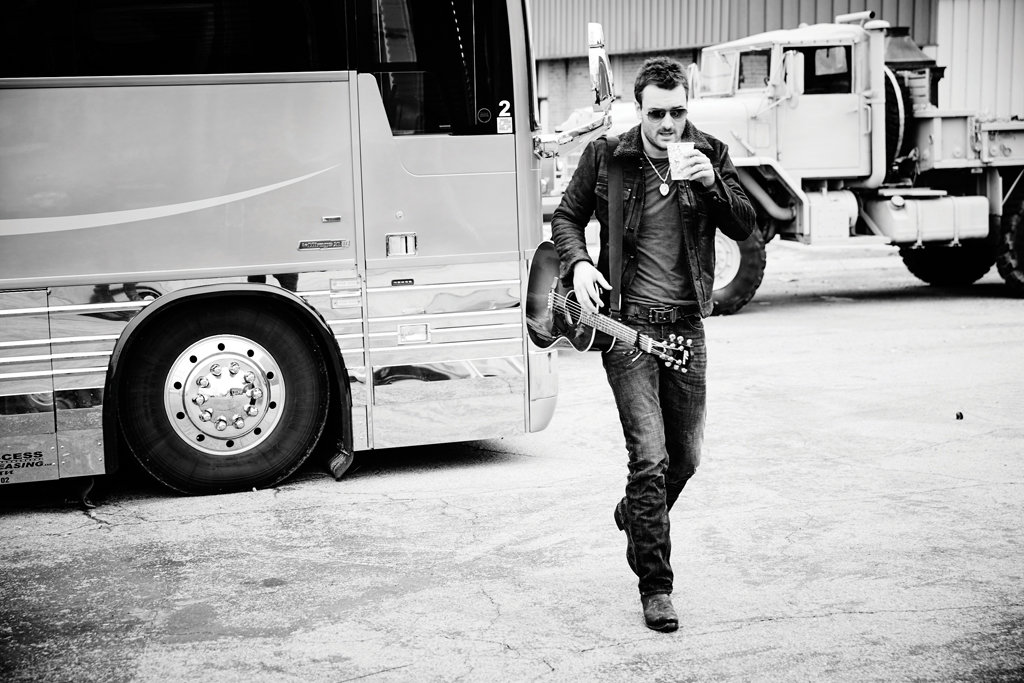 Although there remains a north/south cultural divide in many parts of the USA, Church is no Southern apologist. “I am proud of being from the South, and I can’t shy away from that and I think it’d be a crime to hide from that,” he admits. “I’d prefer people to not like me or my music rather than me pretending to be something or someone I’m not. It’s who I am. I’m a Southerner. Period.”

What Church has always been on some level is a rebel – a reputation he has built on over the years. He and his band were once fired from an opening slot on tour by then-headliners Rascal Flatts for, essentially, blowing them off the stage.

“I’ve always been competitive and I am musically competitive too,” he admits. “I don’t always play by the rules, and maybe we played too long and a little too loud for them.”

This admission leads us on to the story behind the aforementioned altercation several years ago with the security guard who tried to throw one of Church’s fans off the stage.

“It was a punch/kick situation,” Church clarifies. “Thing is, we come from a bar and club background and we played some real dives for years, so I can handle the people where we are now just fine. So I don’t need security to handle our fans aggressively.” 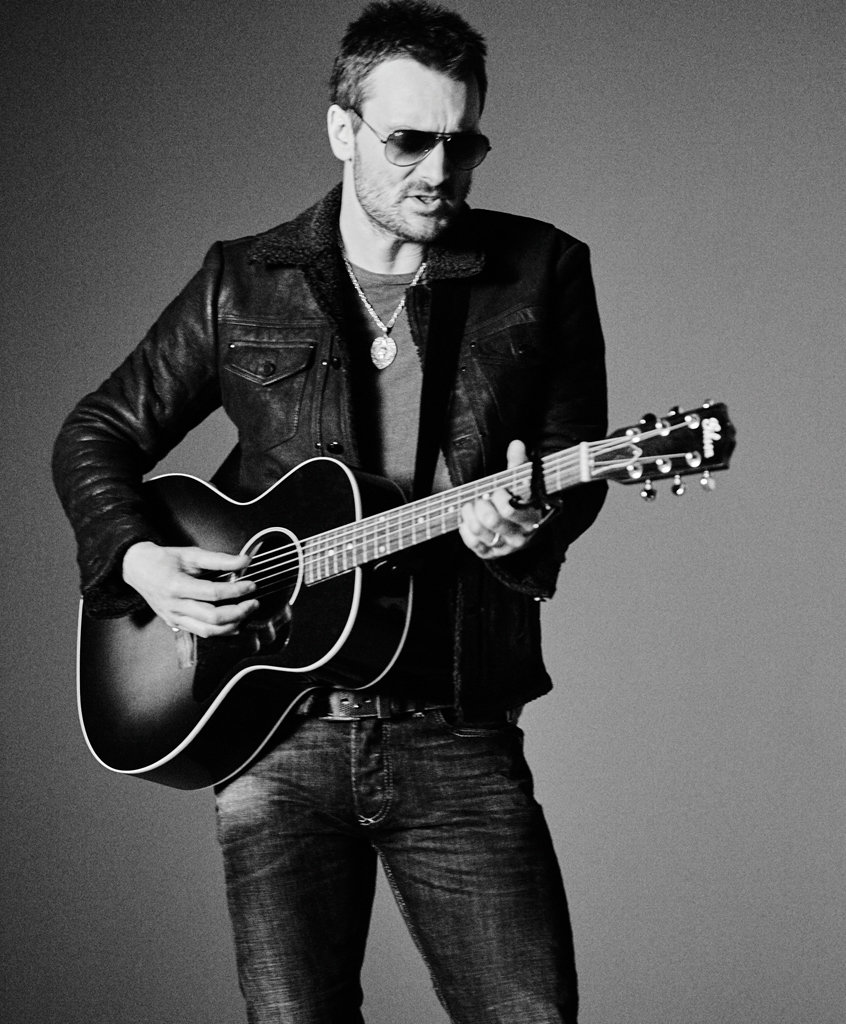 Playing an average of 200 shows a year has provided Church with the enviable opportunity to jam with a couple of his guitar heroes whilst on the road.

“There were a couple of times I was lucky to have that happen,” he concurs. “I did a Mavis Staples tribute one night and got to play with the amazing Joe Walsh and Derek Trucks, and that was a total blast. More recently, I got to play with Warren Haynes and we did The Weight [by The Band].

“I’ve heard that a thousand times and I’m sure it’s the same for Warren, but I swear being on that stage that night hearing his solo on that was one of the greatest solos I’ve heard in my life. So yeah, I’ve had a few of those situations where I played with guys I am a huge fan of, and I’m a huge Allman Brothers and Gov’t Mule fan, so playing with Warren was an honour.”

Although Outsiders guitarist Driver Williams plays the lion’s share of the lead parts live, with Church mostly on acoustic, Eric did undertake a fair portion of the lead contributions on Mr. Misunderstood, with the odd alternative tuning thrown in.

“My favourite tuning is drop D, and I’ll put a capo around that,” he explains. “Sometimes I’ll play open D and open G. Other than that, it’s standard tunings pretty much.”

Church proclaimed recently that “All genres are dead”, interpreted as an attempt to sum up his belief in the futility of labelling art and a nod to the way most of today’s younger fans consume music. 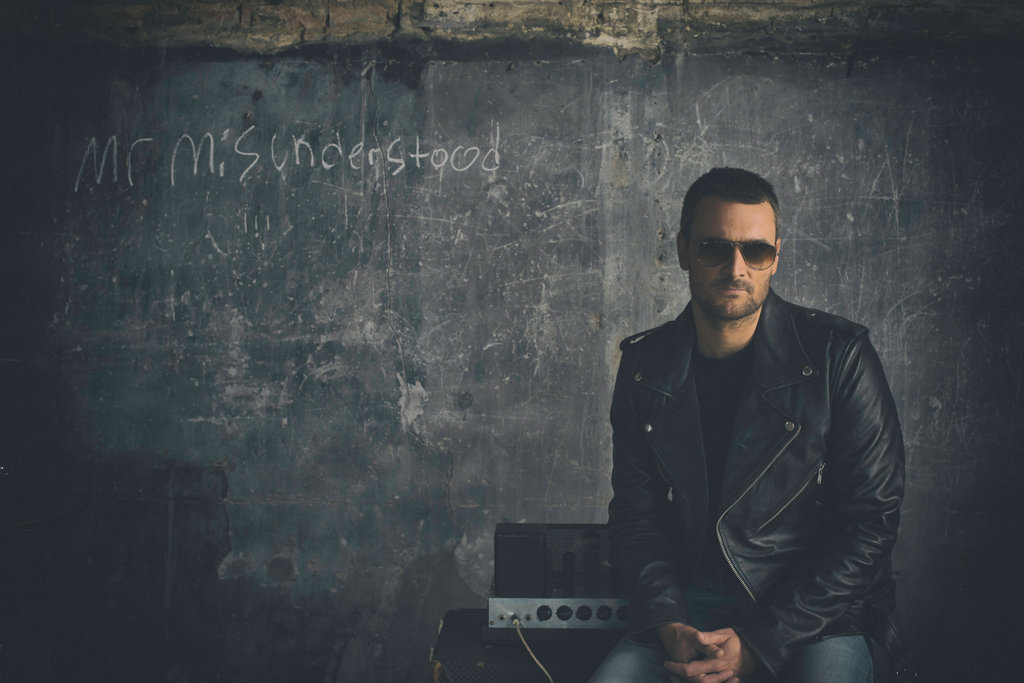 Church has amassed a slew of music industry awards, yet he isn’t concerned with accolades. For him, it’s all about the joy of performing live.

“As much as I think it’s great to win awards, it’s never the reason I make music,” he says. “For me, the pinnacle is walking out there every night and playing songs and having everybody singing back to us. For me, the focus is on strapping on my guitar, going out there and playing. That’s what’s really important. It’s a privilege.”

Live, Church uses a Gibson Hummingbird with Fishman Matrix Infinity pickups, along with Gibson Les Paul Specials, Gibson ES-330s, a semi-hollow Goldtop Les Paul and a Gibson ES-137 from Memphis. In the studio, he relies on a Gretsch Chet Atkins Country Gentleman and a 1961 Martin 00-28G gut-string acoustic.