Endorsed by Carlos Santana at the age of 15, Eric Gales is an exceptional guitarist. With a rocky period in his personal life behind him, new album Middle Of The Road looks set to catapult Gales into the mainstream. 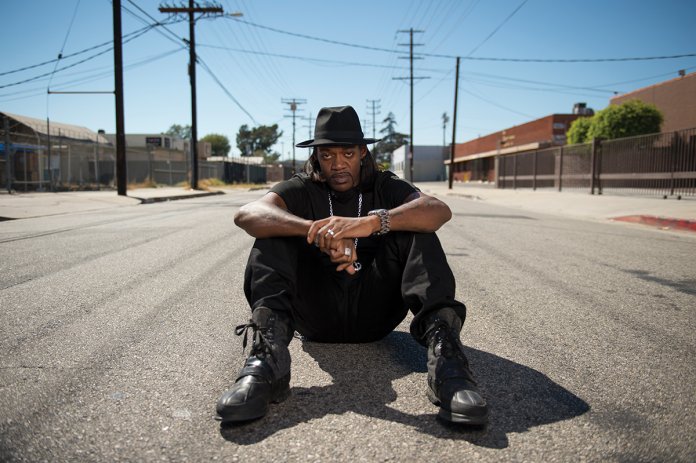 “Hey, how’s it goin’? First, I got a question for you, man… When did you first hear my album? How much have you listened to it? Which tracks do you like?”

Some artists have to be dragged kicking and screaming to talk about their latest record. Not Eric Gales. Seconds after he picks up the phone at his North Carolina home, he’s babbling at 100mph and happily screaming down the wire… if only to make sure G&B has done its homework. 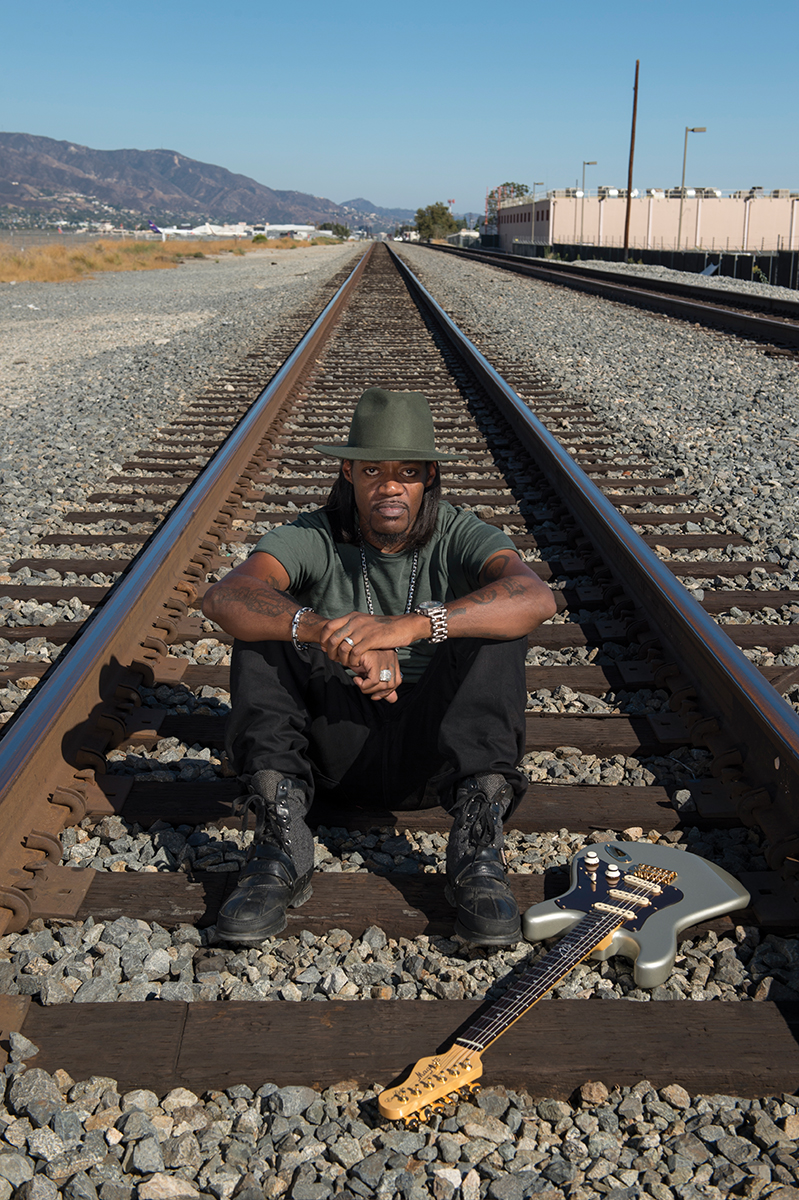 Happily, it’s easy to pick out more than a few highlights on his new album Middle Of The Road and, reassured we’re no random crank caller, Gales is happy to proceed…

“Good, good!” he laughs. “Now, I’ll tell you. I’m very excited about all of it. It’s a fresh new sound for me, a new blues. It’s got a little something for everybody and I’m glad you like it ’cos I’m stoked!”He should be. Gales has been around for years, acclaimed as a prodigious talent at 15 by no less than Carlos Santana, yet he’s never quite cut through to the mainstream.

If anything’s going to change that, Middle Of The Road will. Centre-stage, as ever, is Gales’ unquestionable virtuosity – a seemingly effortless melange of Hendrix, SRV and jazzier Eric Johnson-esque licks winding around bold riffs daubed in vividly thumping tones.

But Middle Of The Road is also Gales’ most accessible work by some stretch. His new songs draw deeply on his well-documented personal struggles – more of which later – and he calls up some stellar friends to add radio-savvy spice. Gary Clark Jr sings and plays on a sassy cover of Freddie King’s Boogie Man, Lauren Hill penned the lyrics for the reggae-tinged Been So Long, Raphael Saadiq (producer for John Legend, Q-Tip, D’Angelo and Stevie Wonder) co-wrote Carry Yourself, and Gales even tips a hat to the next blues wunderkind by dueting with Christone ‘Kingfish’ Ingram, 15, on Help Yourself. 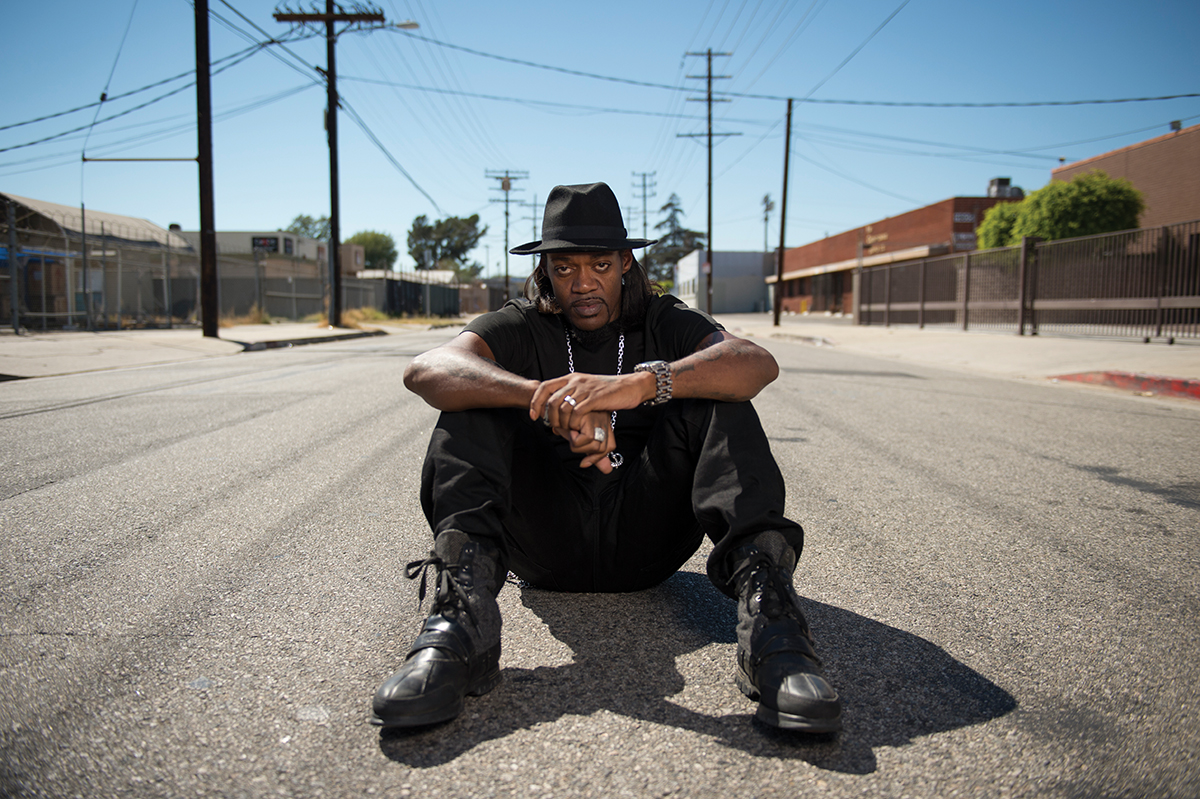 His brother, Eugene Gales, is there, of course, and the whole thing is overseen with sparse clarity by Fabrizio Grossi, producer behind rotating supergroup Supersonic Blues Machine. Grossi had produced Gales before when he guested on a George Clinton/P-Funk project in the 90s. “Eric is simply Miles Davis and Jimi Hendrix’s love child,” he says, “that’s my story and I’m sticking to it.”

Gales explains more: “I came up with everything from scratch for this record in two months. Everything. It really doesn’t take long when you’ve got something to write about, to get to good songs. But that’s the most important thing in creating a body of work.

Experiences. Fab and I crossed paths before… I sort of don’t remember but I do, y’know? That was when I was living in the dark age! But things are so different now. I’m very positive and I’m living in a circle of light.

“Recording was such good fun with Fabrizio. I play bass on this record, too, so when we were tracking it early on it was just me, my wife LaDonna and Fab in the studio.

We all felt so excited – emotions were flying, hairs were standing up, goosebumps were happening… all before other people got involved. So I knew early on I had something going on. Boom! And that’s why I believe the world is really going to take well to this record.”

Gales is infamous for his style. He plays left-handed and fully upside-down (low E string towards the floor), like Albert King, but is naturally right-handed. It’s a Gales family tradition – also followed by Eugene and late brother Little Jimmy King (Manuel Gales), though Little Jimmy was left-handed – and a style handed down by uncle Dempsey Garrett Jr, a righty-playin’ southpaw who jammed with Muddy Waters and Howlin’ Wolf: “But I wasn’t handed the guitar this way, I just picked it up and it felt natural. I guess it’s genes.”

Although Gales teaches in classes and on his own DVDs, he says his backwards approach has never been a problem. 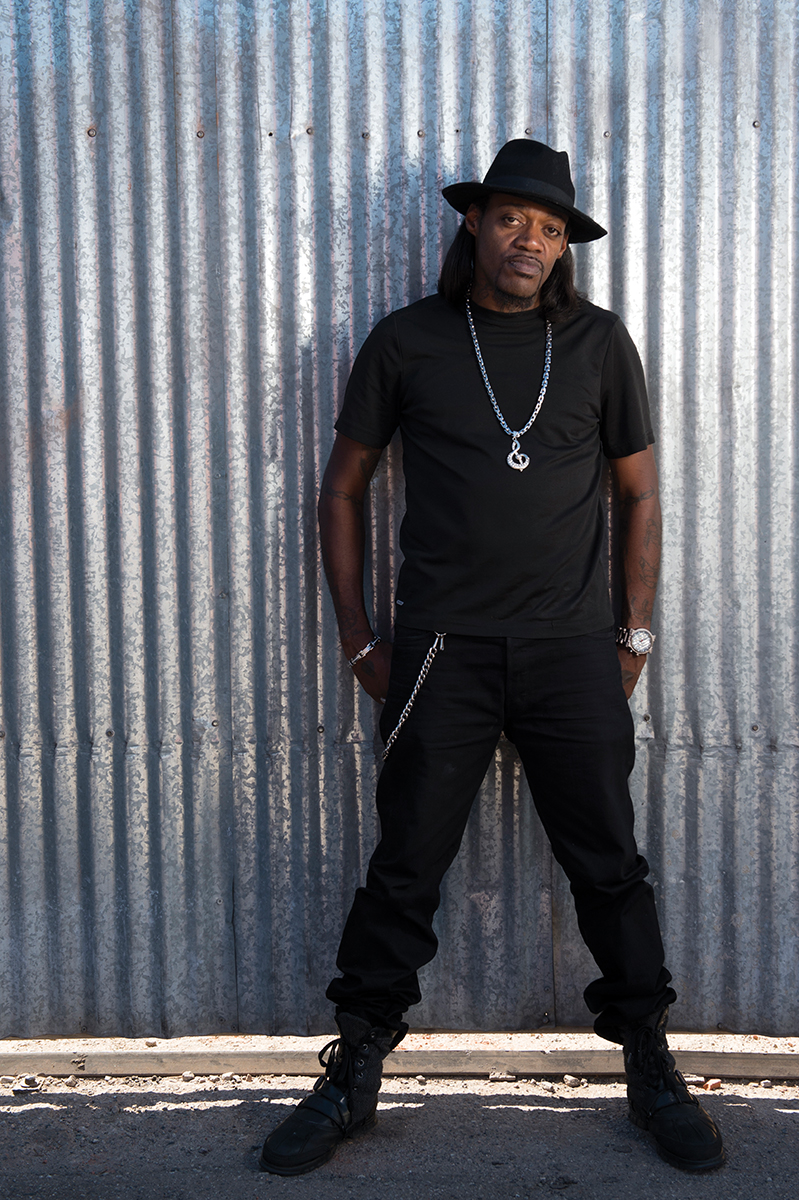 “I personally don’t find it difficult, and don’t think the students find it difficult to take things from me, either. The majority of my students are regular right-handed players, and if I show ’em something, I guess they just have to pay attention!

“I make them use their ear, but that’s one of my big lessons anyway. It’s just so important.
That sounds obvious, but I truly believe that 98 per cent of picking up something is just listening to it. I can teach them the mechanics of something, if you like, but once they’ve got that, it’s down to what they hear. Once they have the tools in their catalogue, it’s up to them to pull it into their own revision, what they want to hear.

“People are like computers, man. You just need to feed in the information. That information is already there, you’ve just got to get it all ready. So, it all comes back to listening! But having said that, don’t think too hard.”

Perhaps Gales’ notable ‘novelty’ added to his acclaim as a youth. He scored a record deal at 15 years old, Carlos Santana hooked him as support for Woodstock 1994 and adopted him as a godson, and Joe Bonamassa says Gales is, “One of the best, if not the best guitar player in the world”.

Stardom was foretold, but has never quite happened for Gales… and he certainly wasn’t helped by serving jail time in 2009 for breaking probation rules (midway through an Experience Hendrix tour) after a drug conviction. A local Memphis paper’s headline of “Eric Gales: Symbol Of Failed War On Drugs” was very much the wrong kind of media buzz. Now older, wiser and clean, Gales is fully honest about the salutes and sanctions that have come his way. 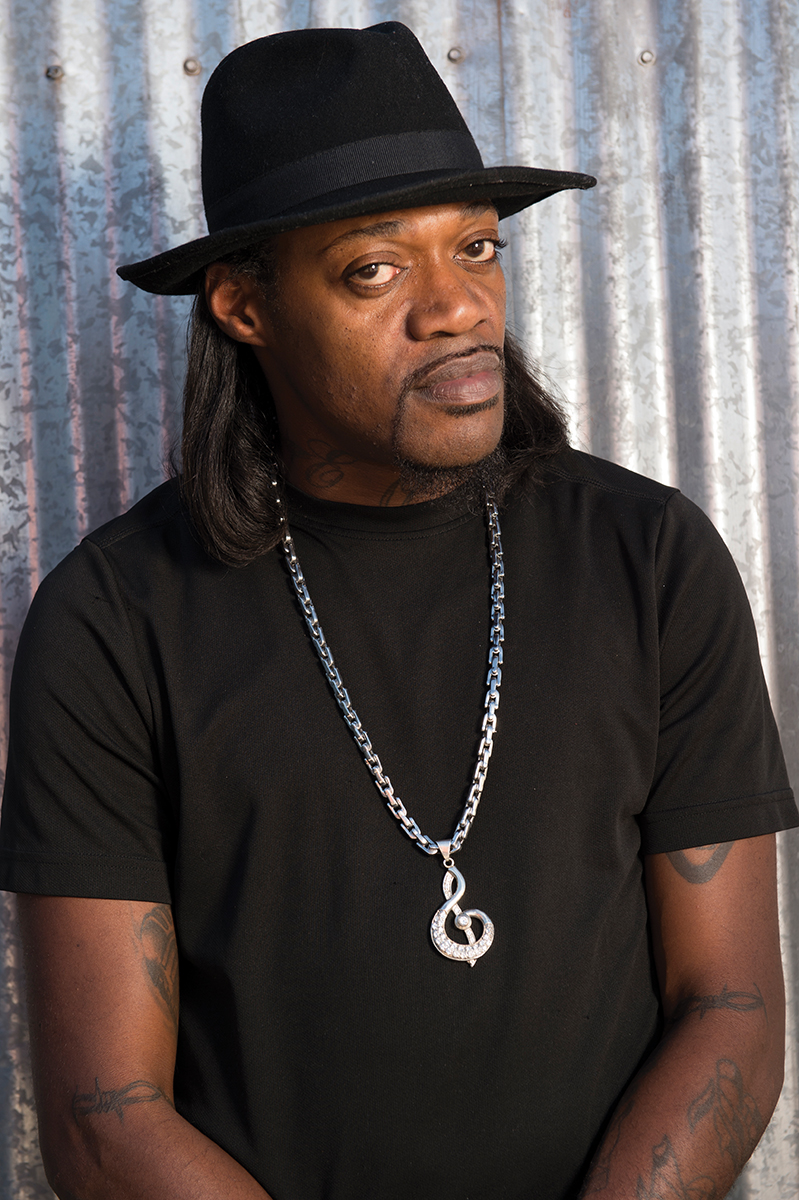 “I appreciate all the acclaim I got early on, I truly do. But I just needed to acquire a lot more to really say something – as a player, a musician, an artist, as a person. That’s the difference in my creativity now.

“But the praise didn’t feel like pressure to me. It felt like pressure when I got on drugs, but the whole world was closin’ in on me then. And the drugs were nothin’ to do with business… it was from just trying to fit in with all the boys in my neighbourhood, man. Worst decision I ever made in my life.

“But as many bridges that I burned, I never thought it was all over. Never. So I’ll take the accolades. It’s a lot better than being talked about as an RIP, everyone sayin’ how good I was. I know what people have said before: ‘Yeah, he’s a badass guitar player, but…’ It’s the ‘BUT’! Things have changed now, there’s no ‘but’, I hope. I feel like I’m firin’ on all cylinders. I’m finding out what’s going on in me, and I think this record will do that for the audience, too. I think it could open the floodgates.”

Screaming leads
The real reason Gales is admired is his fluid, seemingly effortless ability on the guitar. He has had no real training and claims to not know any theory, but is clearly able to solo inventively and melodically at will. In essence, many of his runs are pentatonic-based, but his ‘stepladder’ approach (see his DVDs) injects real dynamism and momentum into ‘stock’ licks.

Add his use of wah, vibrato, fuzz and Whammy pedals and his solos boil over. Middle Of The Road has its molten moments, certainly, but is also bolstered by a refined sense of melody and structure.

“I work hard on my solos,” he says, unsurprisingly, “but did I work them out? Absolutely not. I guarantee you, every solo on this record was a one-taker! My solos are just my emotions, it’s indescribable. Sometimes, I’m like a savant, and anyone who’s seen me play knows I can’t contain myself. I’ll have sporadic screams comin’ out (laughs)… it’s intense, amazing! But that’s what playing guitar means to me.”

There’s a YouTube video of Gales playing live, in which he stops a song and jokingly apologises to the audience for appearing to have Tourette’s Syndrome. 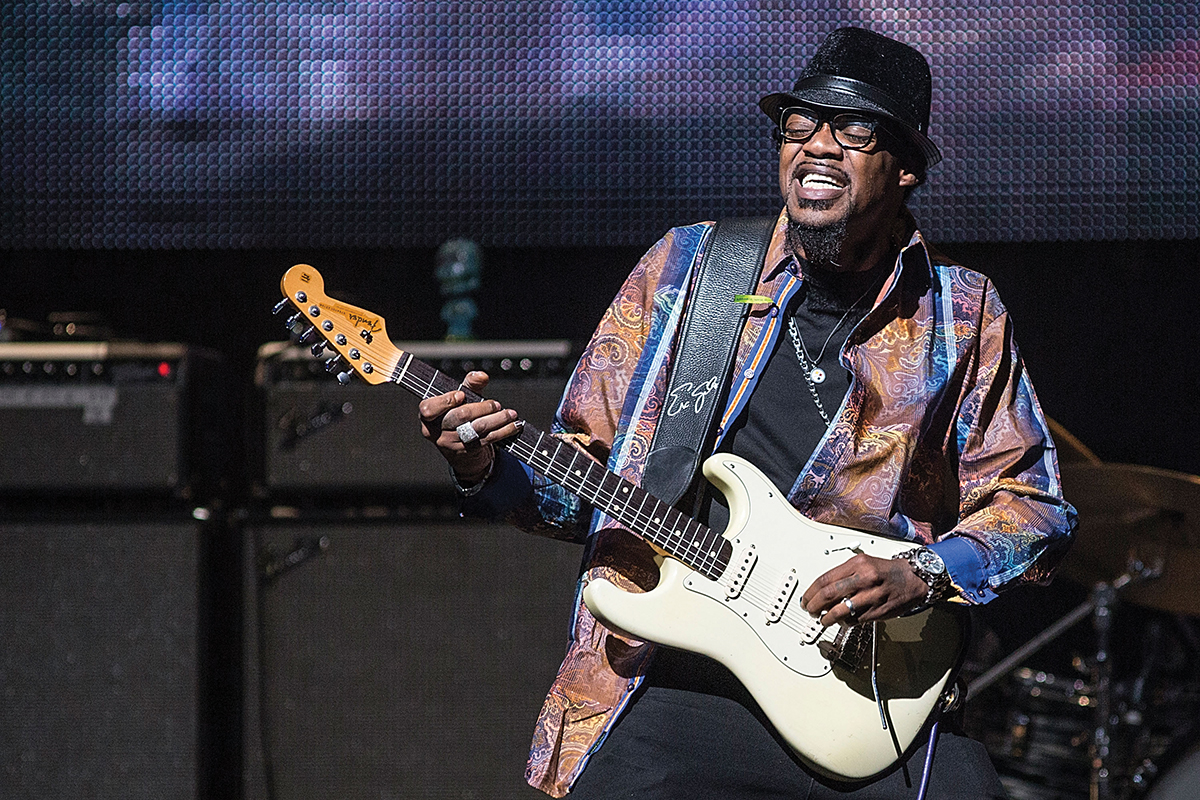 “Yeah, ask my wife,” he laughs. “She says I should have been checked for Tourette’s many times, ha ha! It’s just par for the course. Playing makes me scream.”

When asked what he’d be doing if he didn’t play guitar, he’s temporarily wordless. “Drive a truck? I really don’t know. I seem absorbed by music. Oh yeah, absolutely. 100 per cent. Totally obsessed. I don’t have to think about what I’m creating anymore. I just am, I’m there. But this record is more rounded. It’s me, and it’s about my life. It’s been a long time coming, but I really don’t think this is just a record for guitar players, just for shredders, it’s for anyone.”

It’s not just talk. The new track he’s most proud of on Middle… is Help Me Let Go, a self-aware gospel-blues acoustic ballad he co-wrote with… his therapist. Like his friend and own guiding light Eric Johnson, Gales is eager to challenge perceptions of what he is and isn’t.
“Eric’s probably the player who inspires me technically most right now,” he says, “and I love his EJ acoustic album. I sat in with Eric when he toured, and I think it’s an amazing record. People don’t associate Eric with acoustic music either, but we all have hidden gems in us. That’s what I believe. You’ll hear more this year from me, ’cos I am going to put an acoustic record out, too. Playing and singing. More new blues. Boom!”