No visit to Nashville is complete without a trip to Gruhn Guitars. G&B meets its owner, the world’s leading authority on vintage American electric and acoustic guitars and related instruments. 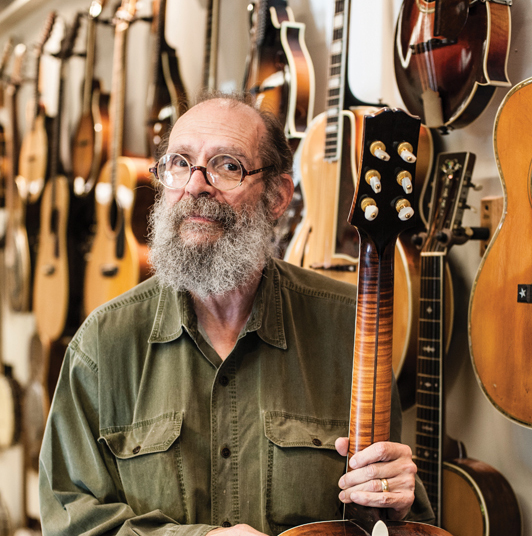 “My mother always said, ‘George, you need to be diversifying, you’re putting all your money into guitars and you’re not saving anything for retirement. We have retirement accounts and we have some stocks and mutual funds and you have all your money in guitars’, and I said, ‘Mom, don’t worry, I don’t put it all in guitars, I have banjos and mandolins, too.”

Though never “strictly guitars”, when it comes to the great American guitar brands, George Gruhn has a level of interest that goes way beyond obsession. Born in New York, Gruhn’s first love was zoology, and he was already collecting snakes at the age of eight when his family relocated to Pittsburgh.

The fascination with all things zoological would continue through Gruhn’s educational career, during which he studied the psychology of animal behaviour at the University Of Chicago. After a semester at the University Of Tennessee in Knoxville, Gruhn abandoned his doctorate, moving to Nashville in early 1969 when Hank Williams Jr came calling, after the country star had heard from Sonny Osborne of the Osborne Brothers’ bluegrass group that the young student had lots of old Martin guitars. 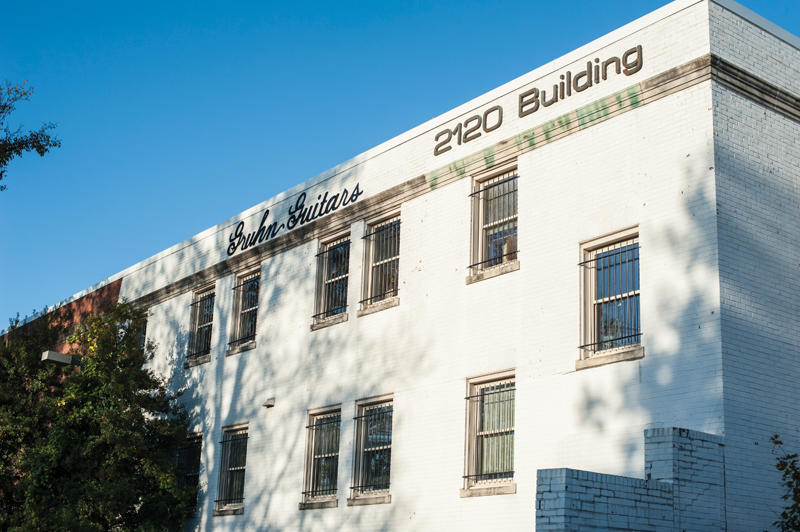 45 years after opening in a 20×60-foot space with an inventory of 22 instruments, after many years on Broadway, Gruhn Guitars is now situated in its largest facility yet at 2120 8th Avenue South. While his beloved reptiles gaze on from glass tanks and two black and white cats dart around in the shafts of Tennessee sunshine that stream through the barred windows of his office, Gruhn explains how guitars got their claws into him.

“I didn’t buy my first guitar until I started college,” Gruhn remembers. “I have a brother three and a half years younger than me who started playing guitar before I did, but I had a driver’s licence before he did, so I drove him around to look for guitars, and to look for his first good one when he wanted to step up to something better. And I discovered how much better used and old acoustics sounded than the new ones, and that got me rather interested. I found I could use the basic same observational skills that any zoological taxonomist would use and apply it to guitars.”

Back in the 1960s, Gruhn was “very actively wheeling and dealing guitars as a student,” and he found that for every guitar he would uncover that he wanted to keep for himself, he would unearth as many as 50 to 100 instruments that were great deals that he simply couldn’t pass up: “I could make money on them. It was idiotic to have discovered it and just leave it there when I knew I could sell it for three times as much. Also, after a while, it dawned on me that that’s how I could afford to keep some.

“Mom and dad were willing to finance a guitar, one. But they weren’t going to support a guitar habit! Especially since to this day my lifetime earnings playing music are $43 from ’63 to the present. But I did learn about guitars very quickly back in the days when it was harder to do it. There were no books about guitars; there were books about how to play, but not vintage or used guitars. Things we take for granted, like the Martin serial number list on the back of my business card, you couldn’t get that. You could write them a letter, giving them a serial number, and they’d look it up and write back to you.”

Martin’s consecutive serial numbering system means that some simple arithmetic can tell you exactly how many instruments the company built each year, which in turn tells its own fascinating story about the state of the wider guitar industry at the time: “In 1972 they peaked at 22,637 guitars,” recalls Gruhn. “In 1982 they made 3,153. By 1982 Martin and Gibson and Fender were in deep, deep shit. Martin made less guitars in 1982 than they did at the height of the depression…”

Luckily for the big American guitar companies, and Gruhn himself, in the mid-1980s a whole generation was about to start buying guitars again:

“The baby boomers bought little red sports cars, tennis and racquetball equipment, guitars and other toys and they saved my ass along with saving Fender, Gibson, Martin and all the others. That would not have happened had antibiotics not been introduced in 1945, because there would have been no such thing as a midlife crisis!”

When it comes to the state of business in 2015, Gruhn is characteristically frank in his appraisal: “I’d starve to death if I had to rely on Nashville business! Fully 70 per cent of the business I do is out of state. 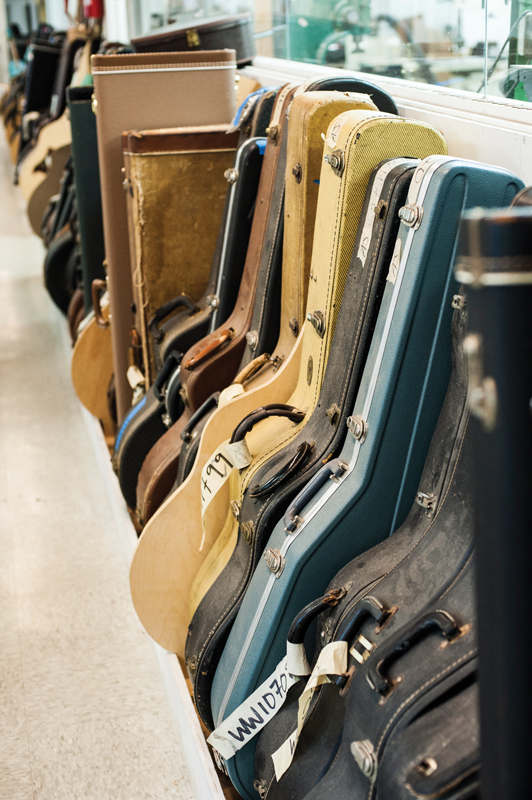 “A high percentage used to be out of the USA, a lot of it was export, but much less so now – one of the prime reasons being the CITES treaty, that made it into a nightmare to export legally. I’m too big to not do it legally! The risk is not just losing the instrument, but you can have literally hundreds of thousands of dollars of fines.

“If I were caught sending an instrument with Brazilian rosewood on an international shipment with no permit for it, they could really, really hurt me. I’m 70 and I have no intention of ever retiring as long as I’m physically and mentally able, but I don’t want to spend my so-called golden years in government housing behind barbed wire! [Getting the documentation] is time consuming and expensive, but it can be done. It can cost anywhere from three to five hundred dollars and it can take anywhere from three to five months.

“A lot of people don’t want to wait, so they may buy it from a small-time dealer or private party in the US, who will send it by mail. The chance of getting caught is a long way from zero, and if you’re a bigger dealer and you are shipping a hundred instruments a month, the odds are not so good. The chance of being caught if you are carrying it as hand luggage is pretty small, but it exists.”

“If it was harvested before the ban, it qualifies for a pre-CITES exemption certificate. But they make it so friggin’ hard to get the certificate! I can get a certificate for Brazilian rosewood, but it can still take several months and for a cheap guitar it’s not worth it. For a very high-dollar guitar it can be worth it. If you’re dealing with Martin guitars, you have an additional CITES problem: ivory.”

“Prior to 1918, if a Martin had white binding on the body it was ivory. Up until about 1917, nuts and saddles were ivory. We can legally take the ivory off and ship it with a bone saddle and a bone nut, but there’s even a fight going on about interstate trade within the USA. NAMM negotiated with the US Fish & Wildlife Service and, at least for interstate, musical instruments can be exempt if they are pre-ban and have less than 200 grams of ivory. So on a big grand piano, it’s pushing the limits. Some big organs with multiple keyboards, they don’t pass. Travelling orchestras have had bows seized.”

“But if you buy a New Old Stock model and you play it with a big belt buckle, pick scratch it… it goes down in value because you scratched it! They scratch it, you pay them for it! It’s a source of never-ending amusement to me. But the fact is that more and more I’m having to deal with a new generation of buyers. Baby boomers are aged beyond the active acquisition phase of their life cycle.”

When it comes to buying advice, Gruhn refutes the notion that old automatically means good, and is a firm believer that instruments such as the 1952 Telecaster and 1959 Les Paul are iconic simply because they were extremely well made in the first place.

Always the salesman, though he denies that any bona fide ‘sleepers’ exist in today’s market, Gruhn refuses to let us leave without playing a lovely 1960 Guild A-500 archtop: “In terms of screaming deals, Guild is an overlooked brand. Some of the older Guilds are pretty damn good, pre-’67 in particular…”