Nearly 60 years after changing British guitar music with The Shadows, the godfather of instrumental electric guitar has returned with a brand-new album and a red Strat still in his hands… 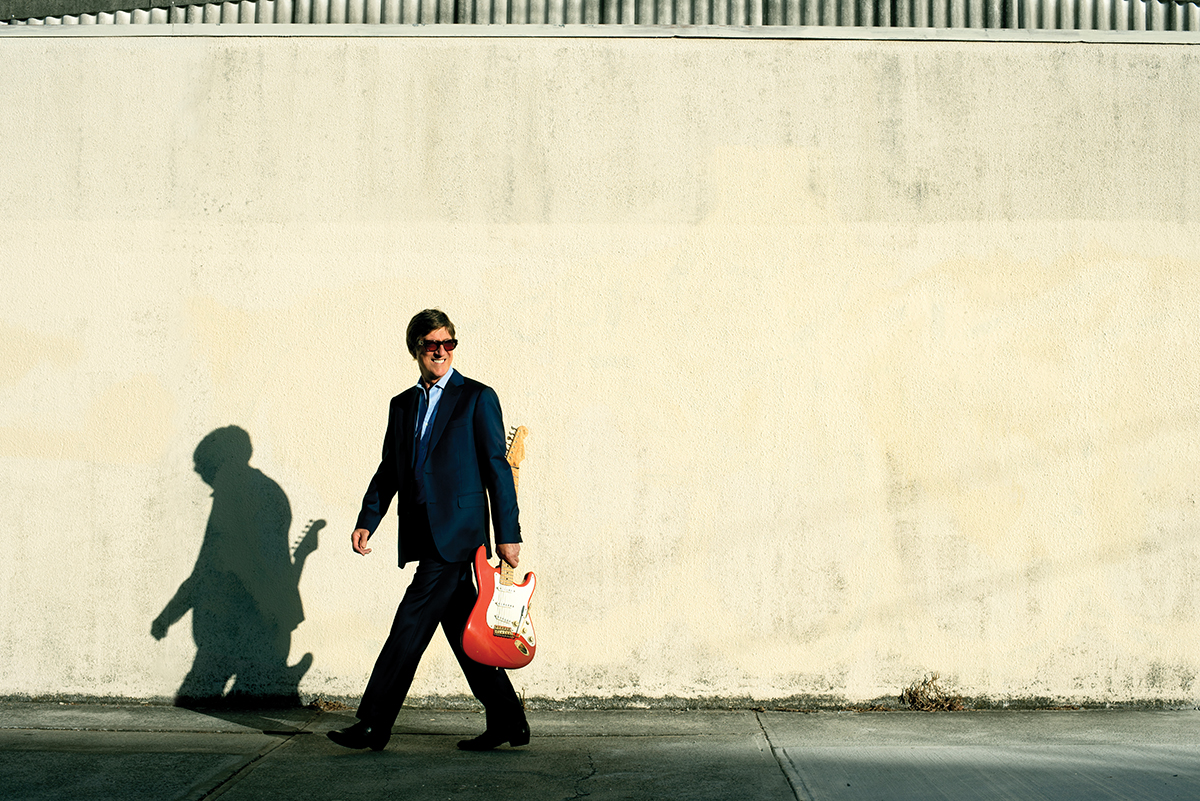 Hank Marvin is a guitarist who needs little introduction; in 1960 he defined the role of ‘lead guitarist’ and led The Shadows – the most popular British instrumental group of all time, to 69 chart successes.

With his Fiesta red Strat he became the first British ‘guitar hero’, inspiring all that followed. With nothing to declare but his continuing love of making music, Hank recently re-entered the studio with his son Ben to make Without A Word – an album that includes many references to his 50s and 60s roots. He spoke to us from his home in Perth, Australia.

“I came up with the title,” Hank explains of Without A Word’s on the nose name. “For me it sums up the concept that something is being said without words, which is how it is with instrumentals – it was a simple as that really!”

The album features a take on Lennon and McCartney’s Michelle, which showcases Hanks signature eloquent phrasing. “I’ve always loved the tune, the ‘major to minor’ stuff,” he notes.

“It has a real French feel to it I wanted to listen again to the Beatles version, and just listen to how Paul sang it, and I just changed the phrasing a little bit here and there to make it a little less ‘square’, because ‘without a word’ I’ve not got a lyric to convey and I just felt a couple of little phrasing shifts seemed to work well for the guitar version.

When we get to the famous guitar motif, which again I’ve always loved and in fact I think it was George Martin’s input? It’s very straight, and worked beautifully on the original, but I felt again for the guitar I wanted to change it a little bit and make it just a little bit syncopated. I used my Gypsy jazz guitar on this in fact.

“When I’m playing a tune, I like to try to imagine I’m singing it and use phrasing that works for me. To feel I’m communicating something through the melody against playing it straight, or changing it so much that you lose some charm of the original.

It’s a thin line between this and what can happen with jazz artists sometimes. I love improvised work, but when I play a great tune I always like to establish it first. If someone’s written a great tune it’s good to show you appreciate and respect the value of that tune.”

Foot loose
Hank is legendary for his expressive phrasing, but rather than use his Strat’s controls to accentuate volume swells, he prefers to use a pedal to give that vocal quality to his lines.

“I’ve tried several pedals over the years,” Hank confirms. “My first was a DeArmond tone and volume pedal – straight up and down was the volume, side to side the tone. Swing to the left and you’ve taken all the top off, to the right and take all the bass end off, and by doing a circular motion with the foot, coming from a bit more bass heavy, top light, not anywhere close to a wah-wah, but just starting with the tone you’re finishing on, gives you a sort of ‘mwah, mwah’, quite a nice effect.

But sadly it was a problem pedal, not the most robust, the mechanism would often fail, and secondly it chopped off a huge amount of volume from the amp.

“Later on I tried a powered Morley pedal. Then on tour I used Boss pedals, which were excellent. On this album I used a Morley pedal, I’ve got a couple of them.

Some people like Jeff Beck have got a wonderful ability to use their little finger on the volume control, I find that difficult to do, because I hold the whammy bar in my hand, which Jeff doesn’t, he uses his fingers on the strings and then he uses the whammy bar almost as an afterthought – I find I can’t do everything at once, moving the bar and trying to do the volume control with my little finger, it’s a mess.

I leave that to an expert like Jeff and I’ll use the volume pedal!” 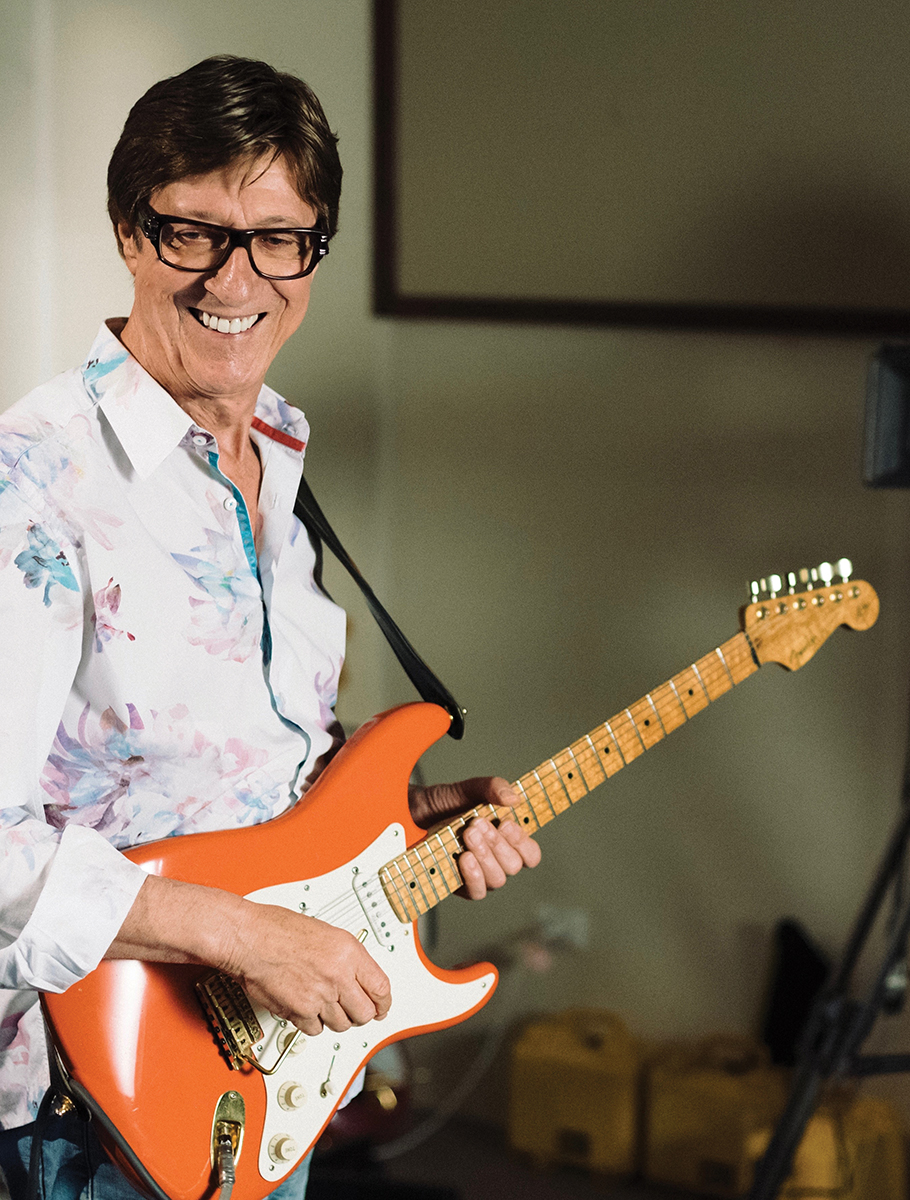 Quiet guitar hero
Hank’s impact on the electric guitar is hard to understate, but the man himself certainly has a good go at downplaying his legacy…

“I’m very happy that I played a relatively modest part in furthering people’s interest in music and in the guitar in particular,” he shrugs. “Out of that early period there have come so many great players, and we all knew and listened to each other. We heard music, we were moved by and wanted to emulate it, but some of us had enough ability to develop our own style.

The great players – Jeff Beck, Mark Knopfler, Brian May, Pete Townshend – they are all so different in their approach, you hear a few bars and know who it is, and I feel that’s important. I feel happy that through the sound we created and the success we had, it motivated people to pick up the guitar.”

Learning guitar in the 1950s was a very different prospect to how it is these days, and in some ways Hank found that a blessing…

“Because we had no knowledge of what was to come, our expectations were quite low really,” he admits. “When I got my first guitar, I knew a little bit, I used to play banjo, in a couple of jazz bands. My skiffle group used to borrow a guitar and I learned all the three-chord tricks and a few minor chords, all very basic stuff but it worked for what we were doing.

Then I think I’d heard Bert Weedon playing Little Red Monkey and I thought, ‘Hey, he’s playing the tune!’ Then I started to listen to the radio and thought, ‘How can I play that on the guitar?’ The first one I learned was Cherry Blossom Pink, an Eddie Calvert hit played on trumpet. Then I tried to play a few solos on the skiffle we did and then when we started playing rock ’n’ roll, I listened to the radio and had some ideas, and if I had an idea in my head I tried to work it out.

I found if I could sing it, I could try to play it – sometimes with success, sometimes not. But gradually it got me moving around the fingerboard and learning how to get my fingers moving in an orderly fashion.

But I still don’t know anything about things like tab. It was just by listening, ‘trial and error’ and if it worked it worked, if not try again. I still wasn’t really aware of things like scales, diminished chords and all that – didn’t have a clue, in fact I don’t think people used them in rock ’n’ roll then so it didn’t matter!”

Indeed, there were precious few theory books around back then, and much of what Hank picked up was by almost by accident…

“We obviously were playing solos using the pentatonic scale, but without realising it or knowing the names of things. I think there were a lot of people like me in the same boat – we couldn’t afford lessons so it was just a case of listening to the radio, buying a couple of records, and trying to work things out. The solos and riffs – we probably missed out some of the subtleties of the chords and so on – but that was just how you learned.”

The new album features Hank’s take on Peter Gunn, a track that already has some serious instrumental music pedigree… “I remember when I first heard the Duane Eddy version I thought, ‘Oh, wow, what is that?’ That slightly jazzy melody line – great stuff! I always loved it, but always wanted to perform it.

“Another piece I’ve always wanted to do was the Baby Elephant Walk so my son Ben and I decided to do it as a mash – I hope we’ve done it justice. Ben and I had written together in the past, so we messed around with a few ideas and came up with something. The Russian Doll idea came from thinking about a tune that had some kind of atmosphere of Russia about it the minor, you know – the Volga Boatmen!’”

“I’ve always loved the Julie London, Barney Kessel version of Cry Me A River. It’s a great tune, very bluesy. I thought let’s do something with a different feel and we came up with this very basic, bass and it seemed to work with the tune so we thought that’s the way we’ll take it. Having listened to it I did think I wish I’d been a bit more adventurous having established the tune in getting away from it but it does have a solo in it, so I left it.”

All in the family
When it came to recording the album’s parts, Hank and Ben kept things very collaborative, and of course, it starts with guitar… “Ben and I put the routines down on the things we are working on together, which was pretty much everything,” Hank notes.

“We put it on Logic just as a basic track to work with, then we transfer it onto Pro Tools and Ben puts down his acoustic and then I put my guitar on and we put the bass and drums on. Real drums with the odd sample. 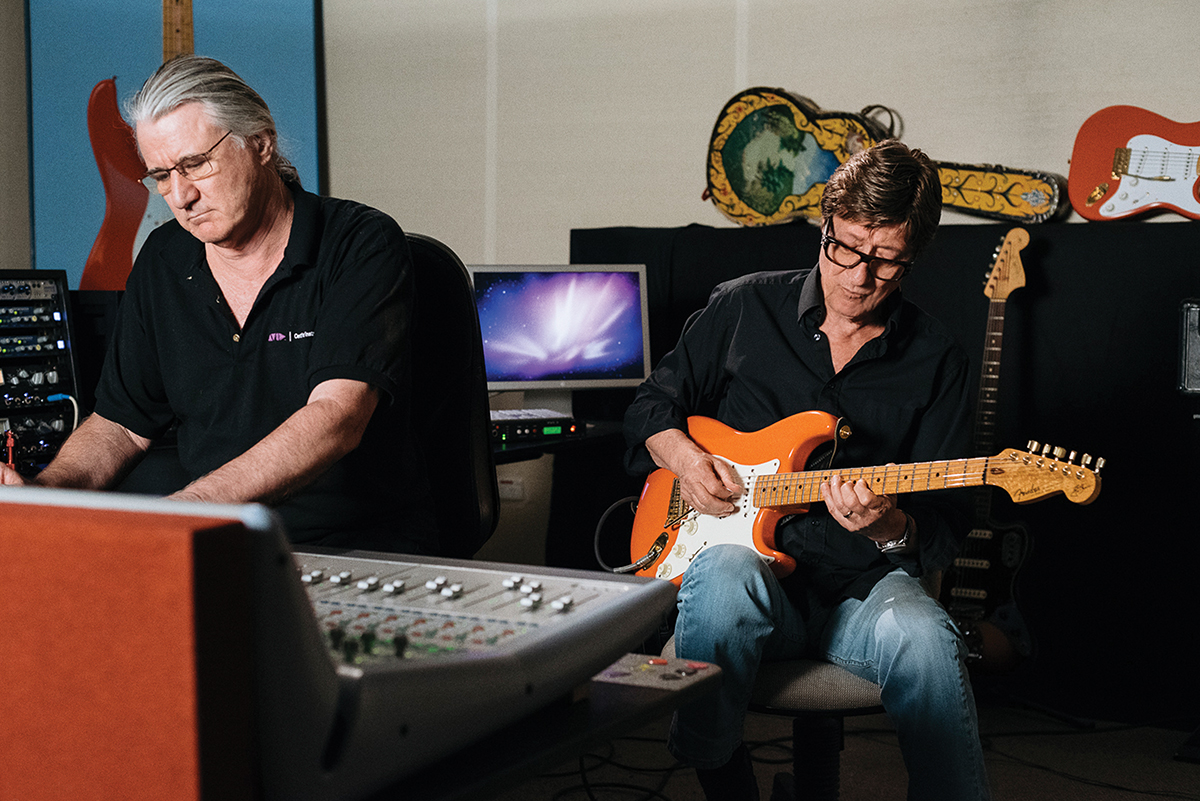 Then we added keyboard and percussion. Live sax as well from Paul Millard – I really like the honking sax at the end of Peter Gunn.” It wouldn’t be a Hank Marvin interview without some talk of Strats, and he’s gone back to an old favourite on the pickup front…

“For the Cliff and the Shads reunion album, I changed from Kinman pickups to Fender ’54 reissues,” Hank explains. “On this album, some of the tracks have those and some have Kinman’s stacked humbuckers. Because with the normal Fender-type pickups you have to find the ‘null point’ – the point in the studio with the minimum hum. With the Kinman’s you don’t get this problem.”

A key facet of Hank’s early sound were seriously heavy strings, and while he’s eased back, his set-up isn’t for the faint hearted…

“It’s wound 3rd (strings), yes. My early strings were 0.013s. Now I’m using 0.011s. A wound 3rd will certainly have that bigger sound of the early Shadows records. Not as easy to play but it’s important.

The Easy-Mute trem arm also helps, and I’ve found that when I went to the traditional bridge, it seems to stay in tune – and it looks great. Also a Teflon nut helps stop the strings sticking, I used to be always putting graphite in bone ones. I also like the Sperzel locking machine heads – and they make for very quick restringing. I like the action not high but not too low. You get a good quality of tone when not too high but not low enough to buzz.”

With more than a half century in music behind him, Hank has a few choice words for those just starting out… “First of all really enjoy yourself and what you’re doing – the fact you can make music,” He enthuses. “Secondly if you want to get more enjoyment out of it, really learn to play the instrument as best you can. Don’t expect things to happen overnight, it takes time.

I love it when people just want to sing or play, and if success comes because of the passion and love of doing it, that’s great!”