The Nashville-based guitarist counts Joe Bonamassa as a friend and fan, and is rapidly becoming one of the most hotly tipped players in blues-rock. As his band prepare to drop a new album, Simo talks creative freedom and ultimate ES-335 tone, tips and technique… 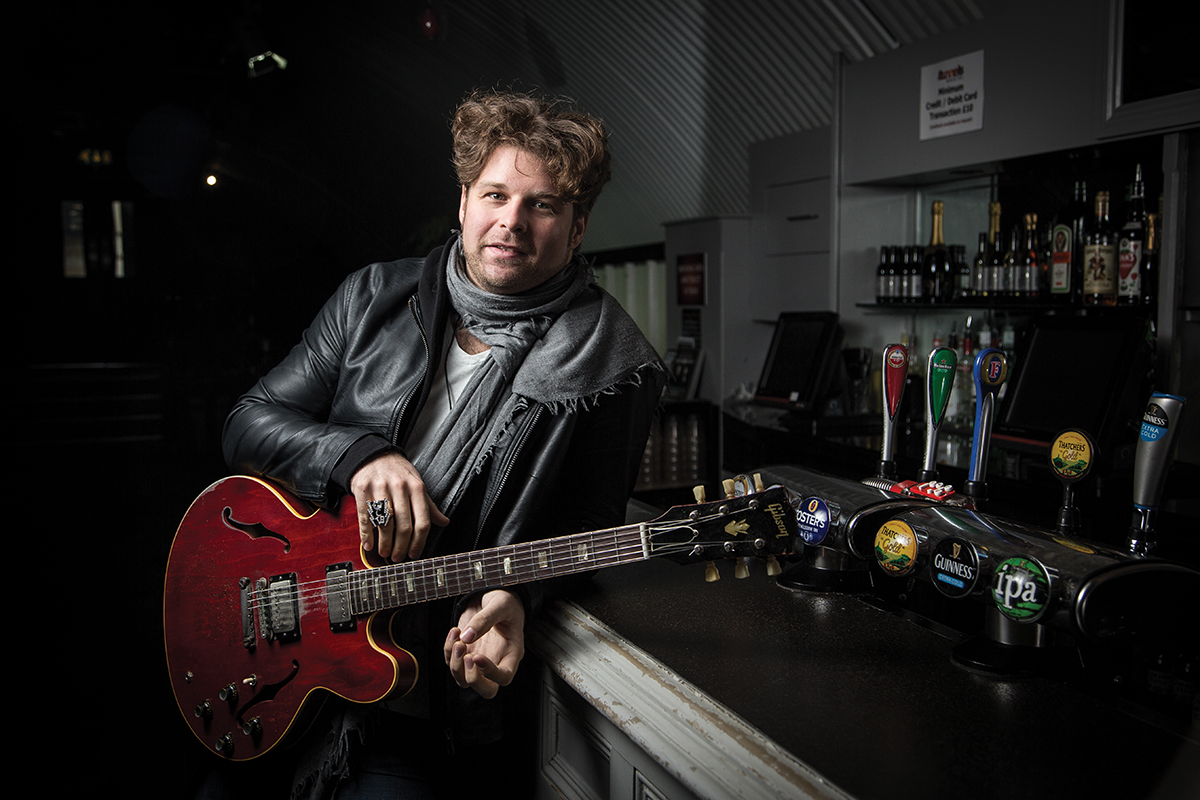 By the time JD Simo was 15 years old, the Chicago-born guitarist had formed a band and sold 5,000 copies of their debut EP around Phoenix, Arizona, where he spent his teenage years, delighting audiences with his dynamic stagecraft and red hot guitar skills. In 2006, he moved to Nashville and spent five years an in-demand session musician. That was all to change in 2011, when he formed the psychedelic blues rock band, SIMO, whose self-title debut troubled the top end of Billboard’s blues chart.

Last year, SIMO returned with their second full-length, Let Love Show The Way – an album that showcases yet more of Simo’s impressive guitar playing, as well as some sumptuous guitar tones courtesy of a ’69 Plexi and a 70s Traynor. What’s more, he was even brave enough to take these two vintage treasures on tour, at least for a while…

“They did come out with me, initially,” Simo qualifies. “But about six months ago I had a big change, I was about 100 shows into the year and was feeling very stifl ed and bored, creatively. First of all I got my 335 back from Gibson after they made a signature model from it, then I decided I was gonna switch to an old Blackface Fender that I’d had for a long time. I wanted to see how it would fit into the context of our band.

“I felt like what I was using was fulfilling the childhood fantasy of all the heroes of mine, but what it was doing was an assimilation of what those guys were doing. Who really cares? Because it’s already been done. For me it was looking for a way to push myself.

“Now I tend to use an old Super Reverb or a Deluxe Reverb. I’ve also got these old Epiphone Futuras, Michael Bloomfield used them when he played with Bob Dylan in the 60s. It’s the shittiest sounding amp you’ve ever heard but it’s amazing. I leave the wobbly tremolo on the Epiphone on all the time and turn the reverb and tremolo on the Fender off and on using the stock footswitch.

I’ll turn the tremolo or reverb speed up or down throughout the course of the show. The point is that when I play it immediately sounds different to me and has helped me free myself.”
With his ES-335 away at Gibson being measured up for a signature model, he didn’t have a bad back-up – a 1957 Les Paul Goldtop owned by thelegendary Duane Allman.

“I used Duane’s guitar for pretty much all of the album,” he recalls. “I’ve gotten to use it at a bunch of gigs. That guitar has been played by a lot of different people. We made the record in two days, that guitar was there so I used it.

“It was a great honour obviously, but what I keep trying to tell people is that it’s a great instrument, it’s inspiring to play, and it was an honour to use it in that circumstance but it’s not gonna make you play great. It certainly didn’t help me or hurt me, but it made the experience more fun.” 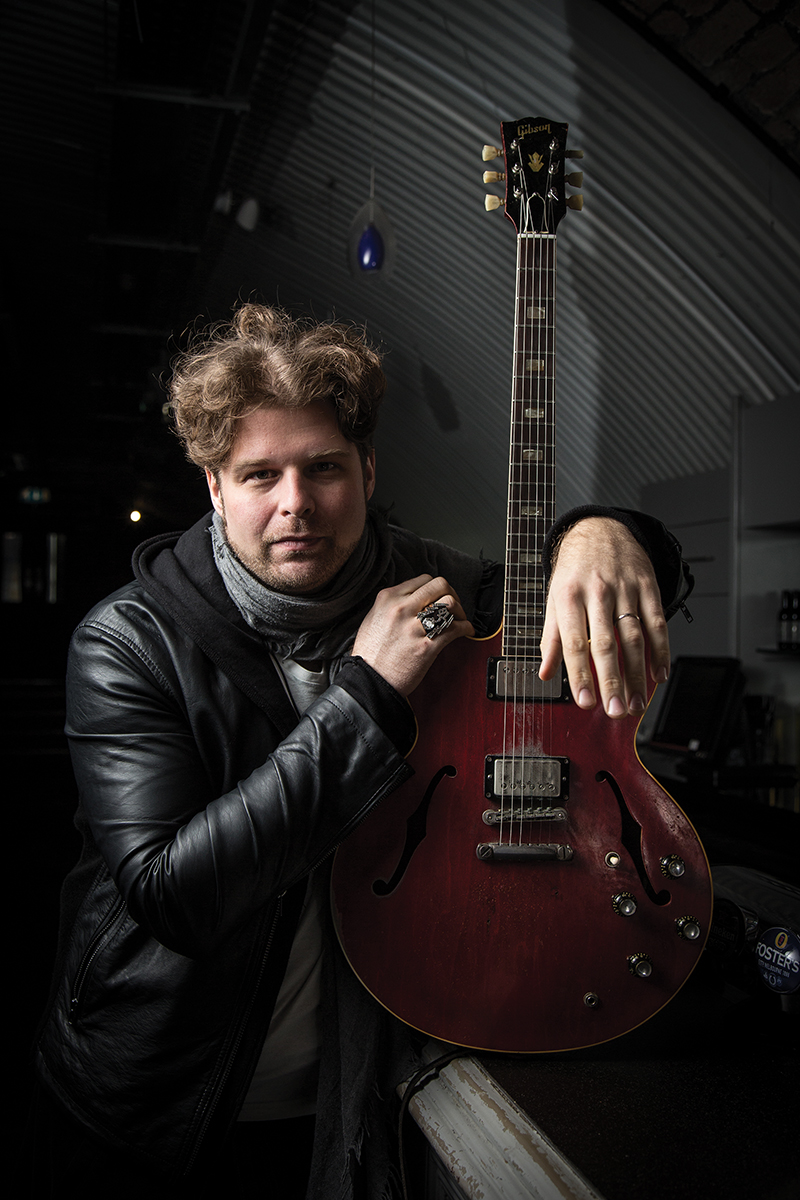 Despite his temporary fling with Duane’s guitar, he wasn’t sad to see it go and pick up his ES-335 again. “This is my guitar, y’know?” he insists. “At this point it’s insane, I’ve gotten to play 130 to 140 Bursts, dozens of old Strats and Telecasters, real Gibson Flying Vs, prewar Martins, D’Angelicos… I’ve got some incredible friends.

“The thing that’s been good about that is it’s shown me what a good instrument can be, and also what a shitty instrument can be. This guitar is the one that I’m the most comfortable with. When I got it, it was brand new, and now it’s beaten to shit, and I did that!”

That’s not to say that he’s not immune to having his head turned when the right instrument comes along, however… “I have a beautiful 1960 Les Paul that a gentleman gave me to play, and when I put it on I feel different,” he explains.

“Not in a good way or a bad way, just different. Where as when I put this [335] on, I don’t feel anything. I just feel comfortable. “I’m not a big proponent of changing guitars a bunch. I always use the analogy of horn players like Cannonball Adderley or Wayne Shorter, who I love – they didn’t gig with four saxes. They had their sax and that was their instrument. That’s not as prevalent, in rock music. It’s a little moreshowy. It’s entertainment in the end, but I prefer the other.”

Simo’s stance on building a relationship with his instrument is commendable, lending itself to the way that he approaches his ES-335. He delivers a near telepathic partnership with the guitar, utilising every component, from playing percussive patterns behind the bridge to hitting natural harmonics past the 12th fret.

He also shows no dependency on stompboxes, using his controls and pick for almost all of his effects needs. “Running through a normal rig you can play quiet, and you have all the gain you’ll ever need in there [volume pot]. One thing I had Joe Glaser do in Nashville, who’s been a long time friend of mine, is put a push pull in here [tone knob], in the middle which makes it go out of phase, so I can sound like T-Bone Walker.”

He prefers to use a wah pedal as a graphic equaliser for atmosphere and rhythmic patterns rather than as a traditional wah, even using his pick to create a record scratch sound by angling it against the wound strings.

“You’re only limited by your own imagination, there’s so much you can do [ just with the guitar]. Whatever I need is there.” Simo’s expertise in pushing his creative envelope is clearly defined, so we asked him to give some advice on improving tone and technique – read them below… 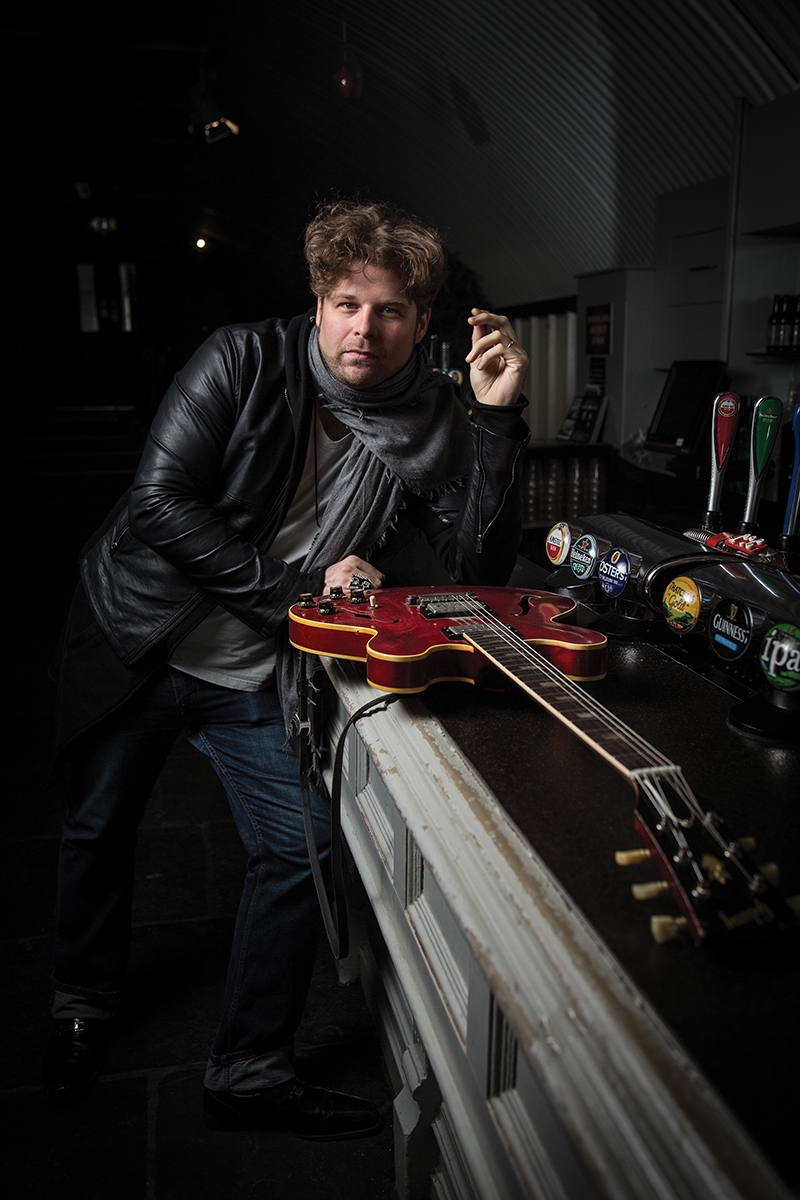 “When I was in this club band in Nashville and I was having to play really fast Bluegrass stuff, I dedicated myself for a while just so I could play it! What happened was my normal hand strength for just bending to a note and being able to vibrato well improved.

“The thing that surprises me is working bands, people that have record deals, famous people, you’d be surprised how many of those guys couldn’t keep it and not let it go.

To me that’s fundamental, because I couldn’t do it at one point either. It’s muscle memory. If you’ve got a handle on hand strength then you pile anything you want on top of it. What that hand strength is gonna give you is command over the neck.”

“The harder you hit it, the more it’s gonna choke. You’re gonna get a lot of attack but the note is gonna die off. Where as if you play it [gently and evenly] the string keeps vibrating.
It keeps going because the string can vibrate. It’s just like when you have a drummer that hits way too freakin’ hard, you’re gonna have all this attack but there’s gonna be no tone in the drum.”

3. Dynamic range is everything

“Dynamic range is everything in music. To me music should be from a whisper to a scream and everything in between. You should be able to accomplish that without touching a volume knob, so you can punctuate like you would when you’re speaking.”

“Everything I do is essentially very simple. The beauty of the great simple players, whether you’re talking bout Ry Cooder or Albert King or Kurt Cobain is phrasing.

The point I’m trying to make is that it’s easier to fill up space with notes and bullshit than it is to breathe and play conversationally.”

“Getting tone out of the instrument and spending time working on pick technique, or lack thereof, and working on your hand strength is something you can exponentially improve even in a month’s time. You’ll see a hell of a change, because our muscle reflexes are quick. These are simple basic things.

“A lot of these basic things are things I think have gotten lost in the current age because they’re not exciting, almost boring. It’s those basic things that inherently make those players I look up to so special. Beauty in simplicity.”