How did the finest American television series of the year end up with a guitar-driven theme tune written and recorded by an indie rock band from London? 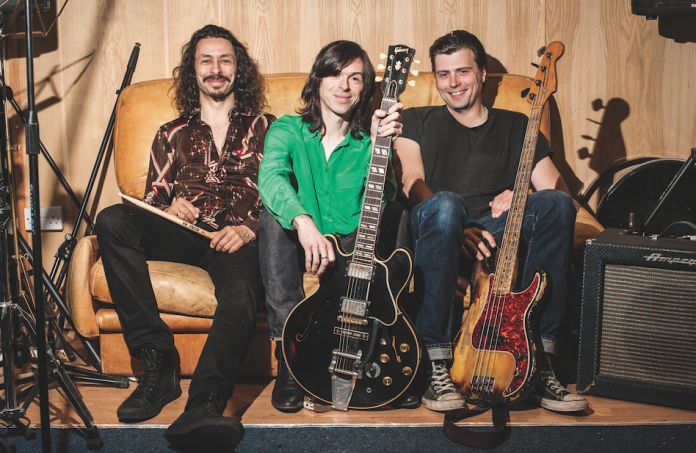 Breaking Bad spin-off Better Call Saul has been one of the international television hits of 2015. The darkly comic drama series sees Bob Odenkirk portray small-time lawyer Jimmy McGill six years before chief Breaking Bad protagonist and aspiring methamphetamine baron Walter White knocks at his door, but it’s the 13 or so seconds of music that cuts off sharply at the beginning of every episode of the much-acclaimed Saul that concerns us here.

With a garage-y twang straight out of the late 1960s and no shortage of Bigsby shimmer, it’s perhaps surprising that one of Better Call Saul’s producers didn’t find the theme for the series on a dusty vintage 45 in a West Coast record shop. In fact, London-based trio Little Barrie were the guilty parties. As we sit down in the band’s soon-to-be-vacated studio in the Chocolate Factory building in Wood Green, singer-guitarist Barrie Cadogan takes up the narrative… 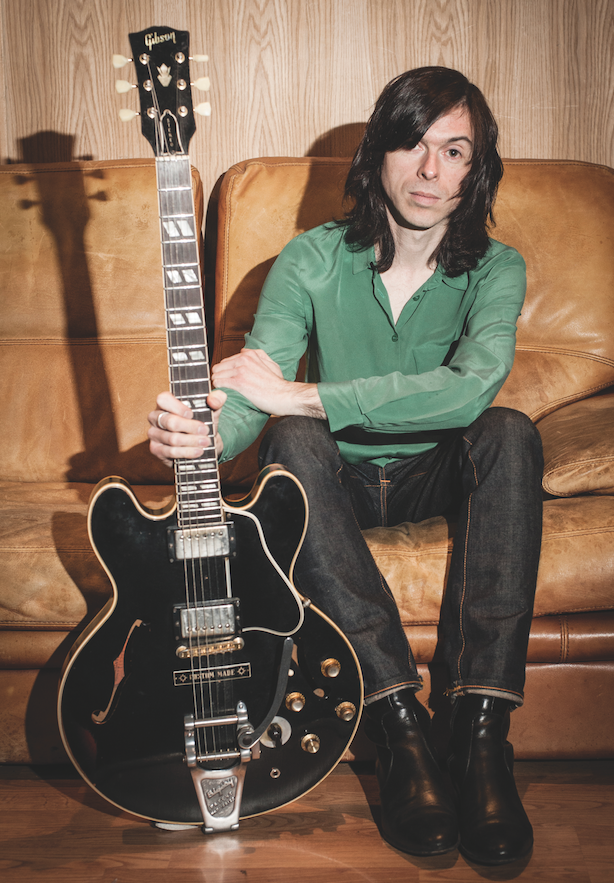 “Thomas Golubic got in touch with us, he was the music supervisor for the series,” Barrie explains. “He’s based in LA and he’s a fan of the band. Although we’d been there a couple of times doing small gigs, it was quite a surprise to find that someone out there had all our records and was into us. He really wanted us to do something for the show.

“There were other people pitching for it as well and by the time he’d got in touch with us the show had been recorded and edited and everything. The deadline was quite tight, so I spoke to him on Skype and he gave us a bit of a rundown on the sort of thing they wanted.

“He was very specific about the fact they wanted to cut something really crudely after about 15 seconds and then go to another scene, and that’s gonna happen at the start of each episode. I probably had three days to get him something, four days max.

“It was interesting because I’ve not done anything like this before. I spent two days writing; they wanted us to give them maybe about 17 options, short themes. They liked the song we did on our second album, called Why Don’t You Do It. They wanted something in that vein.

“We were given a brief where they wanted something like that but more melancholy or wistful. That’s the kind of stuff you’re working with, you just get descriptions. You are hoping that your interpretation of that is the same as theirs.

“They gave us a bit of a rundown about Saul’s character and I did some research as well because I hadn’t seen Breaking Bad – I had to admit that I hadn’t, as I thought I was going to get rumbled at some point. I still haven’t seen it!”

Garage rock
“I tried to get a bit of a feel for it and just buckled down with GarageBand, trying to thrash out things and record as much as I could,” Barrie continues. “If I’m just doing stuff on my own, I prefer to use a Tascam Porta 07 four-track cassette recorder because it sounds better, but just for treating it like a sketchbook and doing stuff really quickly, GarageBand’s alright, you know? It might not always sound great because I don’t have a proper setup.

“All the guitars were just DI’d, so they sounded pretty shitty really on the original demos, but it was enough just to get the ideas down. I brought the laptop up here and we just listened through them on the PA and played through each one.

“In a four-hour period, we managed to record them all and mix them, and then we sent them off that night. A lot of them were a similar tempo ’cause they wanted that feel, y’know? The BPM was similar. And that’s how we did it. 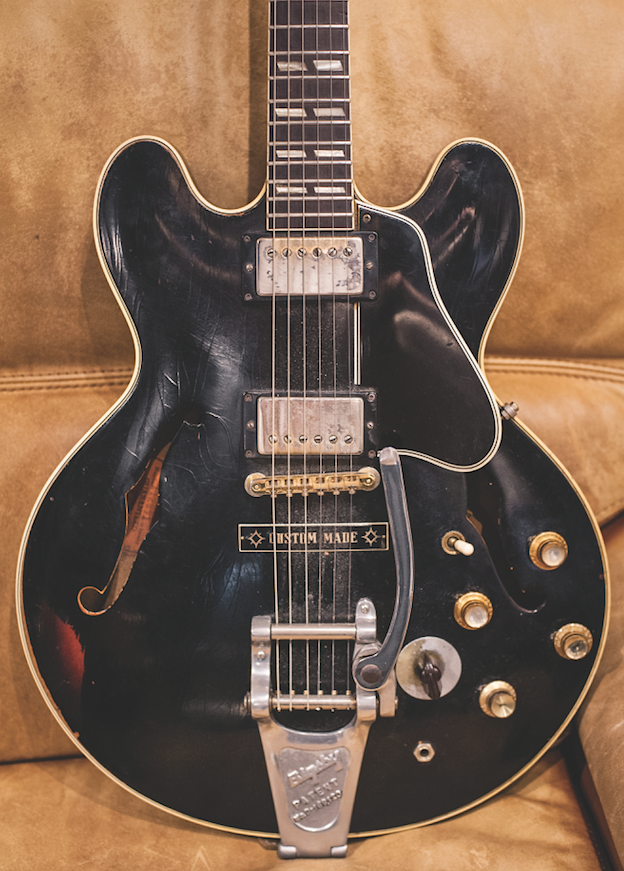 When it came to laying down the guitar parts, Barrie turned to his black 1963 Gibson ES-345 that’s also seen plenty of action in his other role as guitarist in Primal Scream, with whom he’s performed since 2006. “First, I wanted to use my old ES-330, but it’s a little bit noisy. The ES-345 isn’t as noisy and it’s kind of similar, so I just went for that one. I always wanted a black Gibson.

“I was out with a friend and we said, ‘let’s go and have a look in Chandler’s.’ We were having a conversation about how we bothhad too many guitars and shouldn’t buy any more, and I walked in and saw this and I was like, ‘oh fuck! I always wanted a black Gibson.’

“Apparently, the guy who owned it before had it for about 30 years. The black refinish has worn away off the back of the neck and you can see the sunburst on the corner of the body, but it meant that the guitar was affordable. It’s a ’63, so it’s transitional, but the bridge pickup is a PAF.” 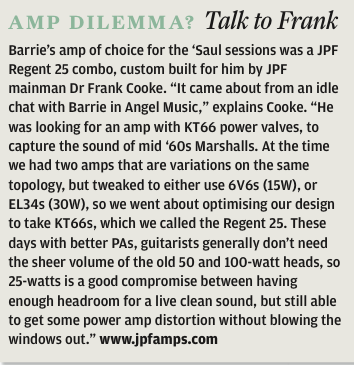 Barrie “just cranked up the treble” on his custom-built JPF Regent 25 combo and plugged the guitar straight in, sans effects. It was a fortuitous decision, as drummer/engineer Virgil Howe – son of Yes guitarist Steve – recalls: “It was lucky we didn’t put reverb on. We used a Lexicon plugin, it’s really good. Then they asked for less reverb on the guitar, so it was a good thing we’d recorded it dry and were able to give them a version with less reverb, otherwise we’d have had to re-record it. It was really lucky.” 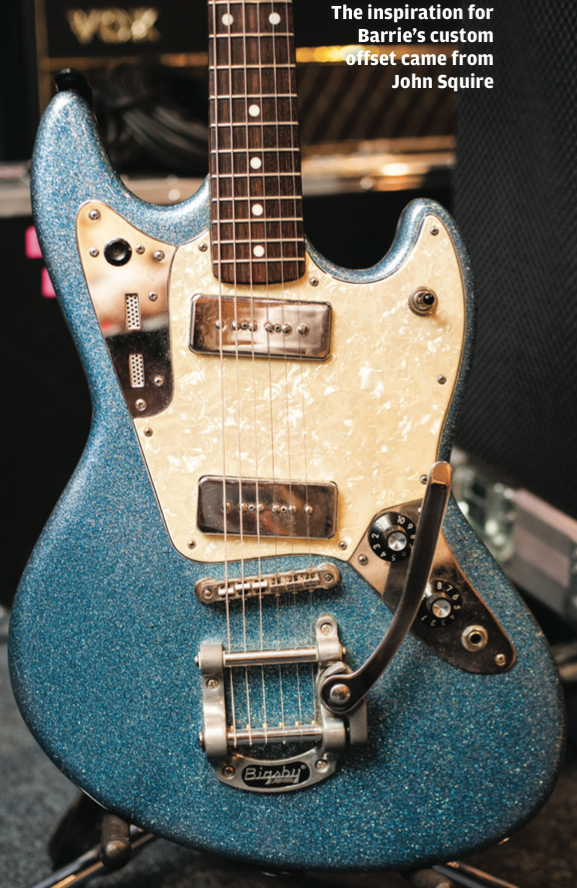 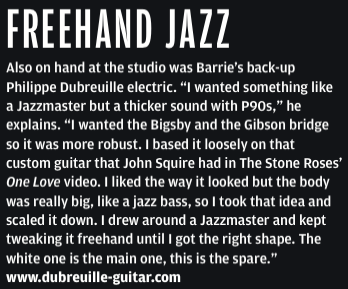 The guitar sound was captured by a Sennheiser MD421-II microphone that Virgil likes because he can “get a lot more bass out of it,” and although he acknowledges that their studio approach wasn’t exactly scientific, the band have learned a thing or two about getting great guitar sounds: “We just stuck the mic up against the grille, there were no measurements going on,” Virgil reveals.

“No ambient mics, it was just straight in. At the time, we were just demoing, so we weren’t paying that much mind to it, but I suppose over the years we’ve found it’s important to record things as well as possible at all stages. If you record it well enough, there’s going to be a use for it down the line somewhere.

“It’s nice, it’s kind of an epitaph for this place – recording something that’s been used on something that’s gone global. It’s a nice way to wave goodbye to the eight or nine years that we’ve been here. I was here before I joined Little Barrie, so it’s been a long time. Barrie’s always said that the guitars sound good in here, there’s something about it. It’s a bit dead for drums, but we’ve found our way around that…”

Room for manoeuvre
“It’s really good for guitars,” Barrie agrees. “You just get a lot of weight out of the guitar, without being muddy.

“We’ve found ways to create more of a room sound, sometimes by using reverbs to treat the master mix rather than the individual parts to create the illusion that you’re all in the same space. That’s what we’re trying to do sometimes; trying to get as much performance as we can into the recording and not have things sounding too separate or too fractured.”
When it came to recording bassist Lewis Wharton’s parts, the band again leaned on Barrie’s JPF amplifier. “Everything was the same,” Barrie remembers. “I might not even have changed the setting on the amp, we just left it.”

Recording bass through electric guitar amps is, of course, nothing new. However, it’s a studio trick that is often overlooked these days in favour of the massive bottom-end offered by modern bass rigs, which is something that Barrie laments: “Classic bass players from the past, like Carol Kaye, used to play through Fender Concert amps with 10-inch speakers. 12s are great for bass, too. A friend of ours from Nottingham plays that plectrum-style with flatwound strings, and he uses a Fender Twin a lot for recording.
“We’ve also used slapback echo on bass. There’s a lot of extra frequencies in modern recordings, which for some styles of music seems quite unnecessary.

“For dance music and stuff, you want all that super-low bass, it’s part of it, and people want to hear that and feel that when they’re in a club; but it’s like sometimes when we are on tour, you get to a gig and they’ve got all these sub speakers under the stage, and if you are a guitar band you don’t need all that super-low frequency.

“We’ve found that with mixing as well; taking a lot of the super-low frequencies out of kick drums, guitars and bass guitars, because they’re kind of irrelevant for the sort of music that we’re doing.” 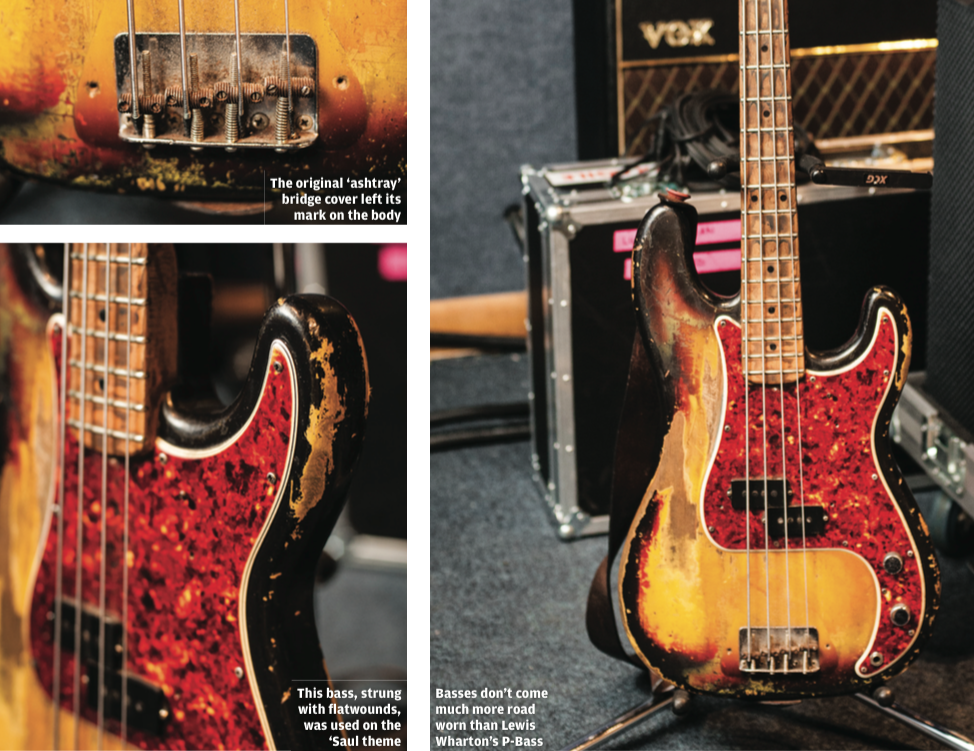 Lo-fi fans
It’s clear that Little Barrie are a band who aren’t afraid to use lo-fidelity equipment in pursuit of a sound that excites them. Given Barrie’s earlier comments about his four-track sounding better than GarageBand and the fact that the band routinely use a Tascam Porta 02 that was a £40 eBay score as a preamp on one of the mics when recording drums, we delve further into his love of tape.

“Cassette’s got a sound,” Barrie insists. “It’s different to one- or two-inch analogue multitrack tape, it’s got a thing of its own. I really love the cassette sound. It’s the old Keith Richards thing, the old Phillips cassette recorder on Street Fighting Man. When you haven’t got the luxury of lots of equipment, you try to find ways to create sounds that are more interesting.

“We’ve got a little amp that’s covered in paint, a little transistor thing; it’s great with fuzzboxes. It’s a Peavey amp that someone’s used as a painting stool while they were decorating. But with fuzzboxes it’s really dry, like a buzzsaw.

“We’ve even done bass through it. You can end up with absolute paralysis in the studio – you can EQ your guitar in an infinite number of ways. But if you think, ‘all we’ve got is this’, you start to work within that and you start to think, ‘well how much can we get out of this?’ Rather than, ‘let’s try plugin number 72’, you know?”

So how does it feel for the band, knowing that the recording they made within limitations in a small North London studio is now, thanks to the limitless viral potential of the internet, being appreciated worldwide? “It’s mad seeing all the little clips of people playing it on YouTube,” Barrie smiles.

“There’s even a big guy with a shaved head on the ukulele. It’s quite mad thinking there are people all around the world playing it.

We’ve had that with some of our other songs as well. There’s lots of people playing Surf Hell because it was on Rocksmith, the computer game.

“There was a guy from Minnesota with a cigarette in his mouth, and a tiny Japanese girl playing it on bass – the bass looked massive. I had a go on it on Rocksmith and I got a really low score because apparently I wasn’t playing it right!”