Few guitarists can hold a candle to Rick Nielsen’s guitar collection – or his musical CV. G&B chats to Cheap Trick’s guitarist about his new album, the Rock and Roll Hall of Fame and his prized possessions… 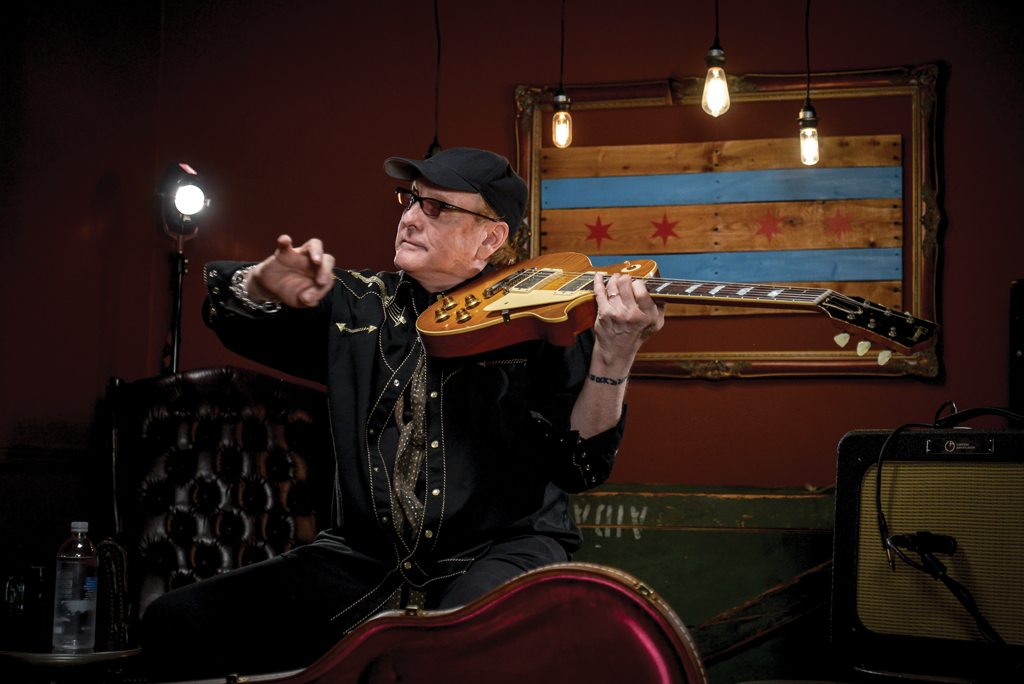 Rick Nielsen is a force of nature with a cartoon-like persona and mischievous sense of humour. He is also the engine behind iconic pop-rockers Cheap Trick, who have just released their first new album in seven years. Bang, Zoom, Crazy… Hello is scented heavily with the winning formula of gutsy, anthem-filled sing-a-longs that have kept the band relevant since 1974. It also validates their recent induction into the Rock and Roll Hall of Fame.

It was not before time. The iconic four-piece from Rockfield, Illinois have chalked up record sales in excess of 20 million and amassed more than 40 international gold and platinum certifications. Much of their success is laid at the feet of their untiring axeman Nielsen, whose boisterous character is usually as vibrant as his onstage persona.

With a famously larger-than-life character, it was perhaps surprising to hear him voice uncertainty when the topic of the band’s induction was raised shortly before the ceremony. “I’ll try not to cry but I probably will. I don’t know what to expect. It’s such an honour, I probably won’t say the right things or do the right stuff until after it’s over. As much as we’ve done and as many gigs as we’ve played, it’s like I really don’t know what to say, and I’m usually not speechless. You can’t usually shut me up!” 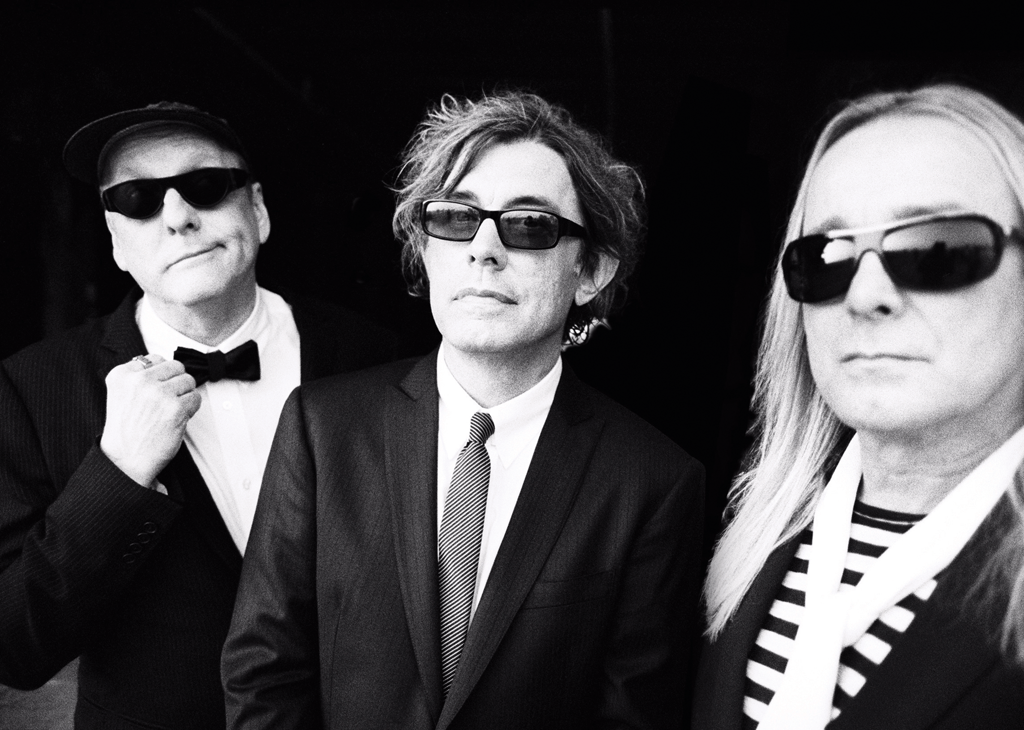 The timing couldn’t have been better. The launch of Bang, Zoom, Crazy… Hello came just a week before the ceremony. Along with the tricksters, other giants of the rock and pop world also received their keys to the industry’s most exclusive club. This year’s inductees included Steve Miller, Chicago and Nielsen’s favourite – Deep Purple. “I was hoping to see Ritchie Blackmore there,” he laughs. “We toured with Blackmore’s Rainbow back in the 1970s, and Ritchie was quiet but he was always fairly nice to me. We’ve also done shows with Deep Purple with Steve Morse – maybe I should be their ring leader. I like them all!”

While Nielsen might find brokering a Deep Purple reunion a little tricky, the outlandish guitarist delivers a seasoned performance on his band’s latest release, with his trademark brand of punk and mod-inspired licks and riffs. Just as significantly, he indulges in a wide palette of sounds using an array of Les Pauls, a maple-neck Esquire and his trusty Hamer with a vibrato bar. He is, after all,
a prolific collector of guitars and amps of all different shapes and sizes.

“I have about 450 guitars, or something like that. I’m not exactly sure,” he says. “Overall, I have between 1,500 and 2,000 different instruments, including amps, guitars, pedals and drums.”

Nielsen, who began his musical life as a drummer, is famed for his impressive stockpile of guitars. His decision to “thin the herd” last year through Reverb.com grabbed headlines, with his 1956 Sunburst Gibson Les Paul Junior selling for $5,760. While his Reverb shop is now empty and is “on holiday”, his personal collection still contains some unimaginable gems.

“My oldest guitar is an 1854 Martin that I got from my dad,” he says proudly. “It’s a Martin that comes in a coffin case and has ebony tuning pegs that are like violin tuning pegs; there are no gears on them at all. I have a few older instruments like that.” 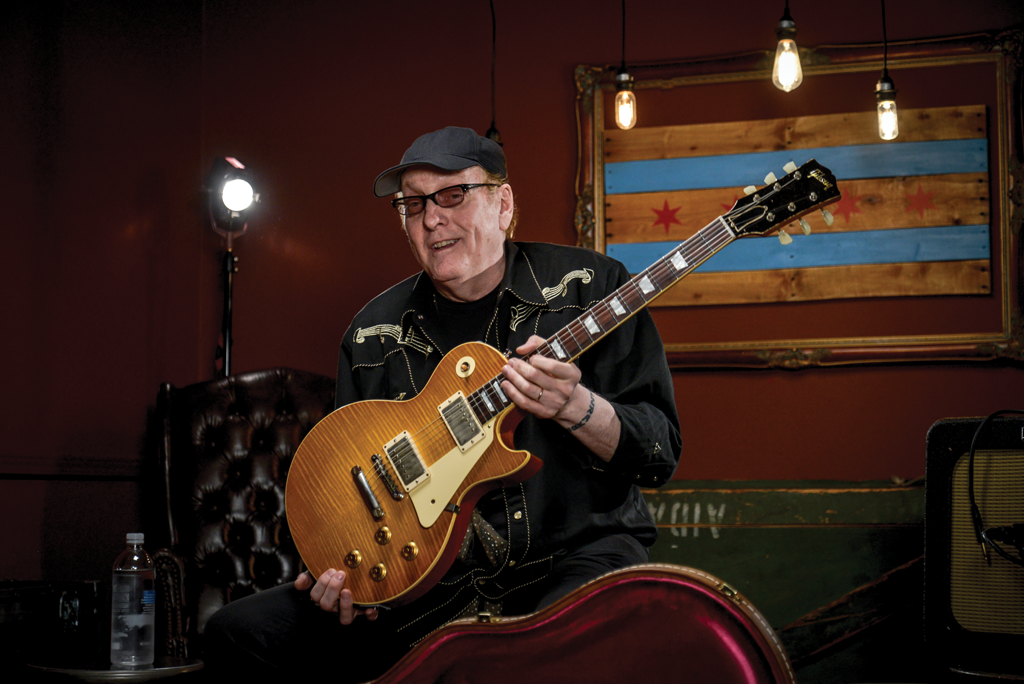 Add to that Fender, Gibson and Rickenbacker lap steels made in the 1940s and you get a sense of the extent of Nielsen’s jaw-dropping collection. “My oldest electric is the first Les Paul I ever bought; the 1955 Goldtop.”

And it doesn’t stop there: “This year, I got two or three more Stratocasters and I also got a White Penguin that was actually built for me by Gretsch.”

If Nielsen’s ever-expanding clutch of six-strings hasn’t sparked your buds of envy into full bloom, it’s worth mentioning that he has also been working with Gibson to recreate one of his most cherished stage and studio guitars – his 1959 Les Paul Standard. Delivered with True Historic specifications and offered in two finish options (aged and vintage gloss), the first 50 of these faithful reproductions will be hand-signed.

“That’s another honour for me,” Nielsen admits. “Gibson got in touch with me and took my guitar away to get all the right dimensions and the scratch marks – it has faded tiger stripes that are just beautiful. I got asked four years ago if I wanted to do it.”

Nielsen continues: “Just looking at it, it sounds good – they’re very hard to tell apart. They did an excellent job. The Custom Shop at Gibson really care. I have a bunch of Les Pauls: ’58s, ’59s and ’60s. They’re all good, but some are better than others, and this one is just great, state-of-the-art stuff.” 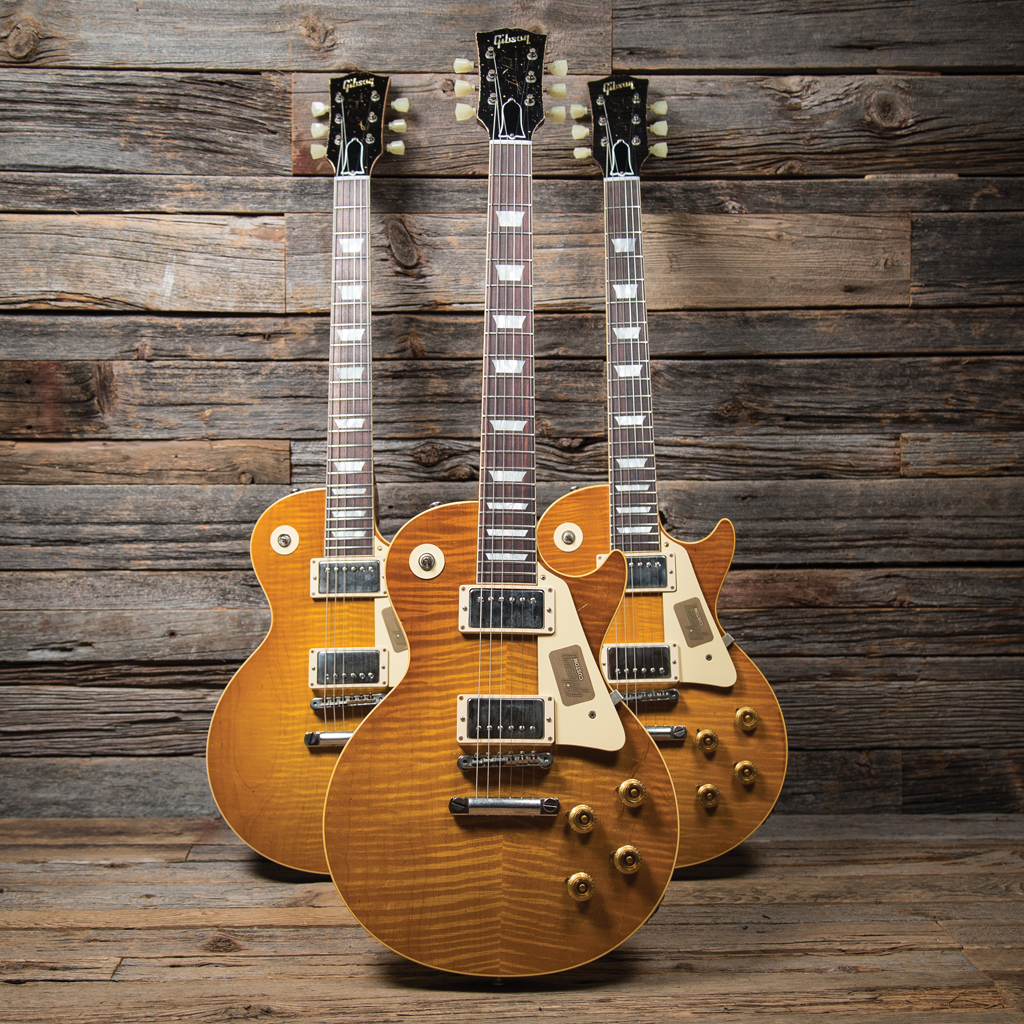 The limited edition guitars will include some personal touches suggested by Nielsen himself, including a checkerboard strap and checkerboard handle cover. Apart from that, the guitar has been painstakingly recreated to be just like the original. “Some people make them to their own specs, but I think the specs from the ’58, ’59 and ’60 guitars were just fine,” he says. “You don’t need to make them any better. They’re just beautiful.”

Nielsen took the ethos of relic’ing to its natural conclusion by creating a carbon copy of his beloved 1959 Les Paul Standard. He even wanted his nod to the past applied to the guitar’s cases; something Gibson had never done before. “You have these guitars that are all beat-up, they’re relic’d, they look like the old stuff and then they put them in brand new cases,” he explains. “These are new cases but made to look like you’ve got some mojo; like you’ve been on the road with them.” 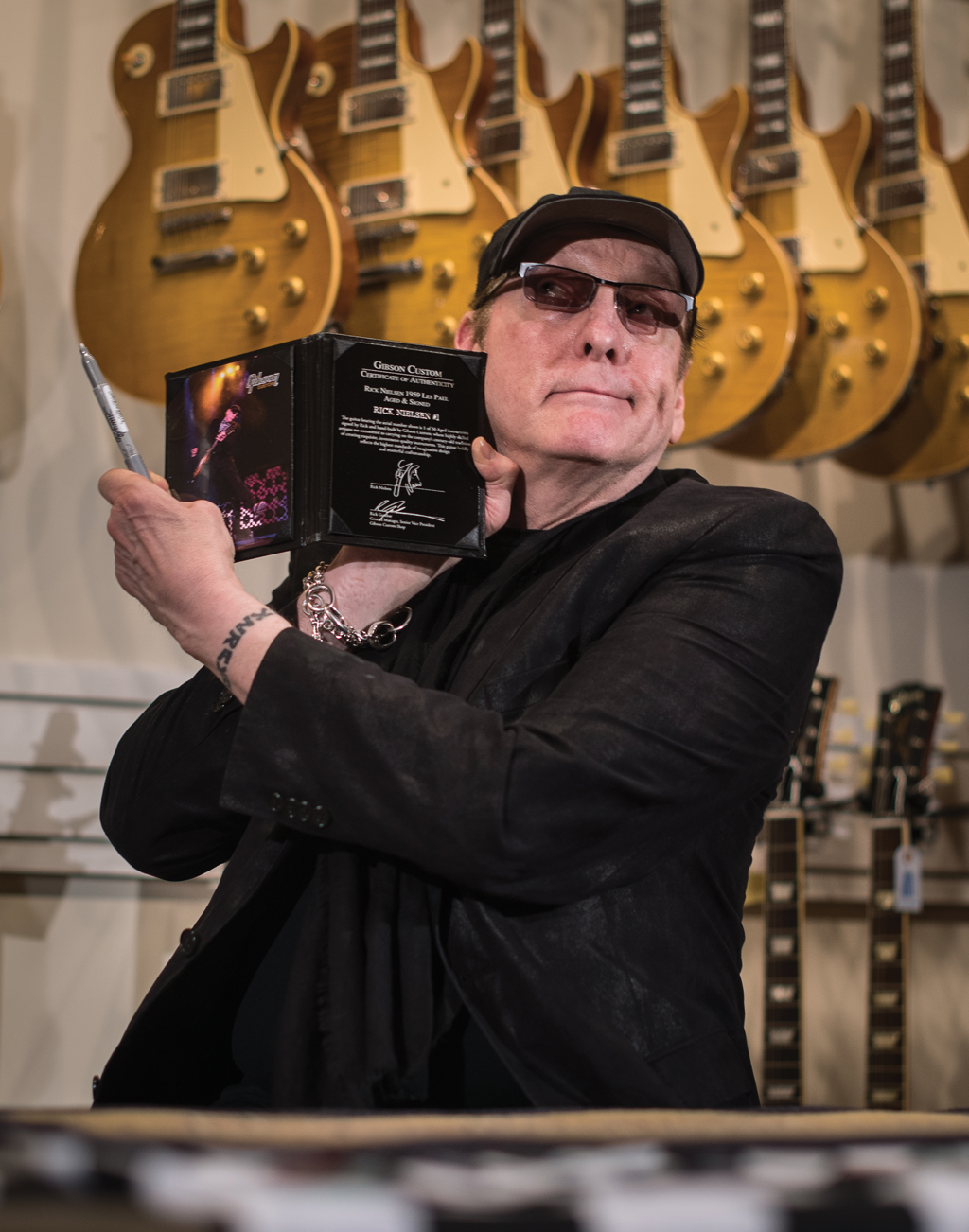 This additional layer of authenticity takes the idea of ageing instruments into a realm where distinguishing the original from the ‘new’ instrument could become little more than a chin-rubbing exercise, especially if the cases are equally identical. For Nielsen, it means he can take all the looks, tones and feel of his guitar out on the road without incurring the kind of expensive insurance needed when he brings out the original.

It also adds another artefact to his collection, which continues to expand despite the occasional cull. Nielsen’s collection ran to 160 guitars in 1985 – 30 years on, he has nearly tripled his tally in a blaze of unashamed musical indulgence. If any one of us had the funds, wouldn’t we do the same?

Despite including some well-documented oddities such as his five-necked Hamers, Nielsen’s collection also has depth, as ably illustrated by his 162-year-old Martin. The rarest and possibly the most expensive guitar he owns is a 1963 Guild Merle Travis guitar, which 53 years ago would have set you back $2,000 (or $40,000 in today’s money). 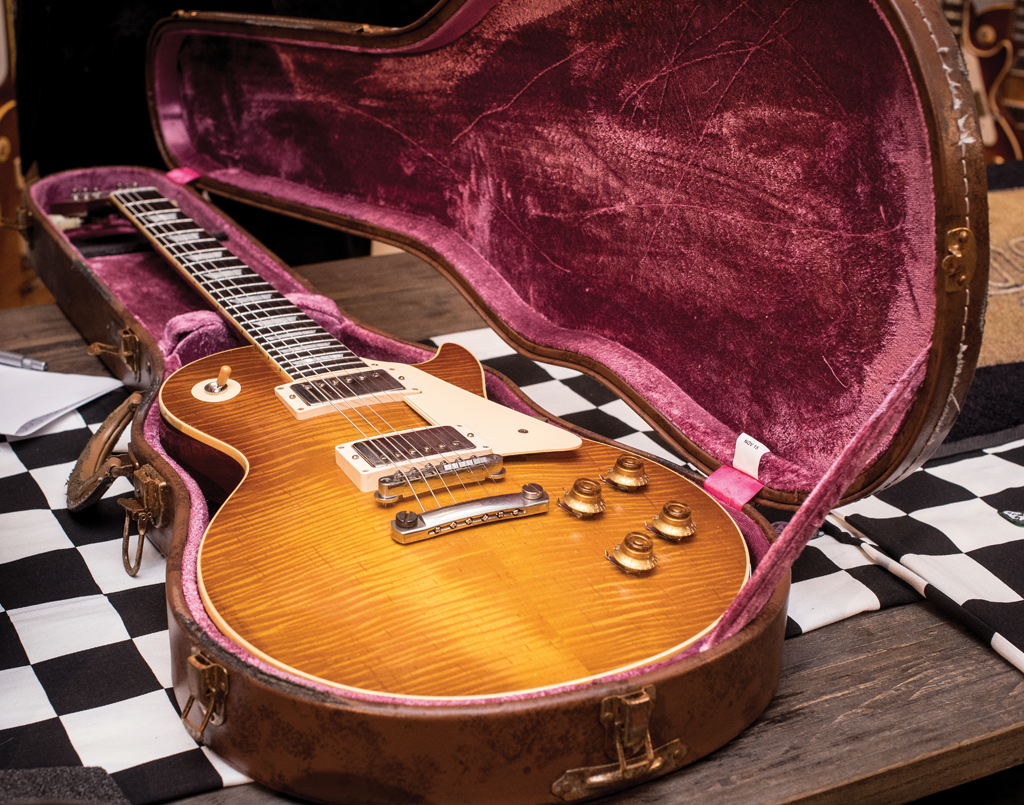 Not surprisingly, Nielsen didn’t purchase his Merle Travis when it was first released in a run of just three, but he did spend a good proportion of his adult life searching one out. “I looked for one for 35 years,” he explains. “They only made three. One that Merle Travis had, a second one, which is the one I have, and a third one, which I have pictures of Pete Townshend playing but now belongs to a collector. That’s about the rarest guitar I have.”

He continues: “Mine was completely smashed up and in pieces when I got it. I had two of the Guild people who originally built it in 1963, who were then working at Fender, to restore it. When it was done, I was offered a million dollars for it. It had taken me 35 years to find it, so I was going to hang on to it for a while. I never heard back from the guy.”

Like many of us, Nielsen has an incurable lust for guitars, which has culminated in a bountiful collection of beautiful and preciously rare instruments. Now, with the Gibson Custom Shop version completed, a new album just launched and entry into the Rock and Roll Hall of Fame secured, it would seem Nielsen has hit something of a purple patch.

“I’ve taken [the Merle Travis guitar] to a few shows,” he says thoughtfully. “I took it to John Mayer; he’s got more money than anyone and suggested he would like it, but he said he was collecting watches. I got a picture of him playing it.

“I took my guitar to see Joe Perry and Lenny Kravitz, who were touring together, and I got a picture of the three of us with it. And I also took it to Conan O’Brien because he’s a guitar collector. A few people have seen it who could afford it, but I’m not selling it. Not yet.”