John Victor Edwards is known to an army of Status Quo fans as Rhino, the powerhouse bassist behind an outfit that are arguably the UK’s longest running boogie rock band. We caught up with an excited Rhino, after a recent 17-date European tour promoting a new album, not with the Quo, but his own band, Rhino’s Revenge. 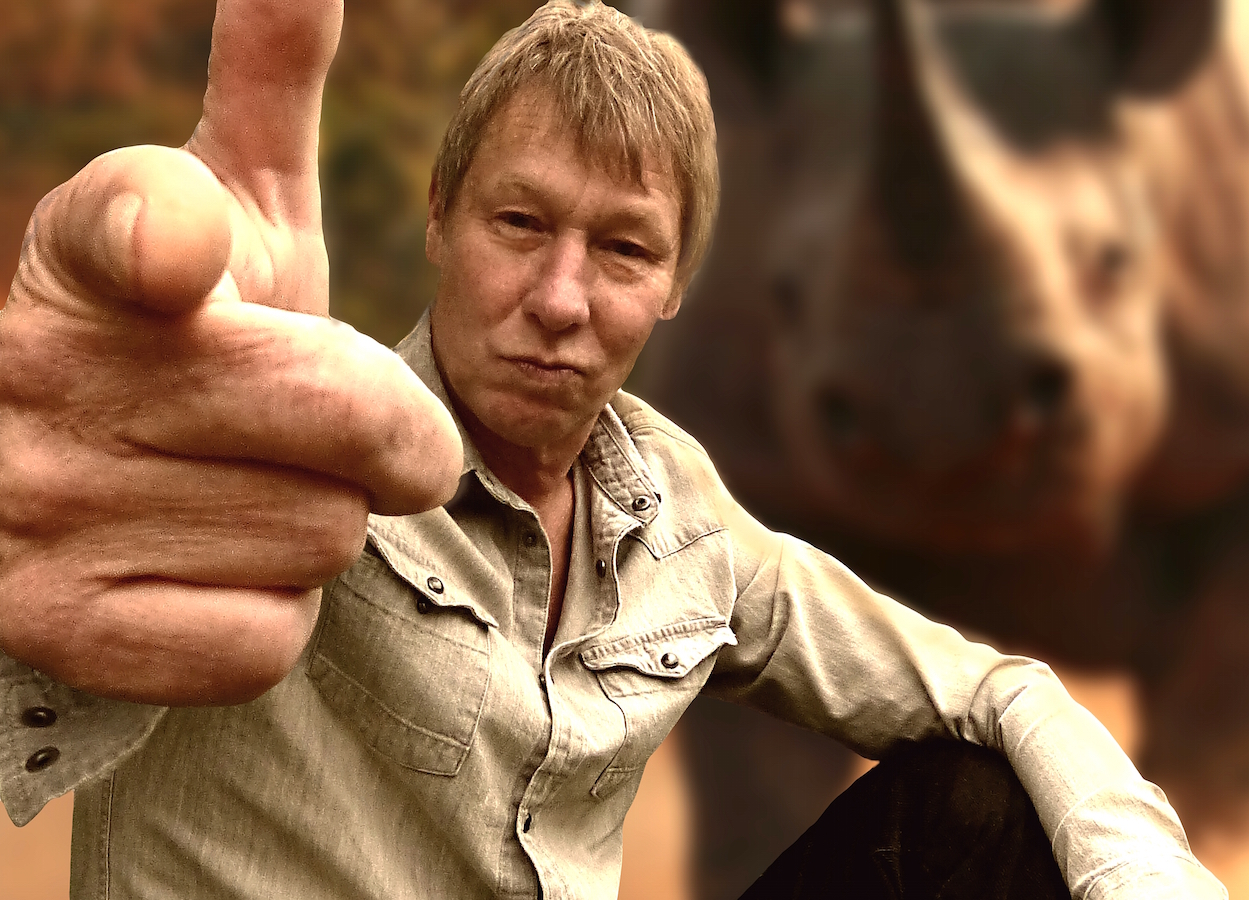 “They were all storming shows”, says Rhino, “Taking in nine UK venues starting with a sell-out at the 100 Club in London, then into Germany, Holland and France, finishing back in Britain. I couldn’t pronounce some of the names of the cities, in Holland, so I was asking the audience where we were.

“Sure, we played a few Status Quo songs, the ones I’ve written for the band including, Two Way Traffic, Gravy Train, Obstruction Day and Bad News, but most of the material was from my new album, a full 15 years since the last one was released on Eagle records called Rhino’s Revenge, named after the band.

“After a full decade and half of sales, it’s now probably just reached iron in the gold and platinum album awards… ha ha. I liked that last album, but in a way, it wasn’t quite me. So I wanted this new album which will be released late autumn 2015, and by the way, has the really imaginative name of Rhino’s Revenge II, to be a step forward, and I’m very pleased with the results. I’d had most of the songs in my head, but I don’t get that much spare time off from Status Quo to concentrate on writing, which I actually find quite difficult.

“It doesn’t come easy at all, even though I’ve written songs on each of the last three Status Quo albums, which does help to keep my creative juices flowing, but songwriting for me is like letting my brain bleed. I really like to write on my own, the trade off is that you don’t have anyone to bounce ideas off, but at the end of the day, it’s me that’s coming out with the ideas, for better or for worse maybe.

“I can spend months on lyrics, although some people might think I spend half a minute. I also think it’s essential to write the music to match the mood. It’s all about the attention to detail, I also spend a long time on the arrangements which I’ve done throughout the 11 tracks on this new album, leaving the final touches to my producer Mike Paxman who also produced my first album and a host of Quo albums including Aquostic.”

So when does a busy bass player find time to get into songwriting mode?
“It ain’t easy. Whenever I can really. When I knuckled down with a decision to complete several demos and record the new album to a deadline, I actually found myself writing and recording whilst touring with Quo. Although I got the job done, it wasn’t an enjoyable experience, it was a distraction really.

“My recording gear is a bit dated, it’s pretty much hands-on, I’m using a Boss BR1200CD digital recorder. I call it Noah, as it’s from the ark compared to modern plug-ins, but it’s brilliant, I can understand it. I play all the instruments on the demos and just go in wham bang crash to keep them raw. I want them to have the vibe of the song. I’m not one for all this modern fangled loop stuff, where the demo can sound as good as the finished track. It works for some people but none of that’s for me. I don’t mind a little layering here and there, but doing it with humans, not loops.

“When I’m on the road with the Status Quo, I don’t want to be thinking of anything else. I’d rather go out for a walk or rummage through the 99p shops rather than have to sit in a room and finish a song. I need to concentrate on the tour, on a day off I’m chilled, on a show day I’m horrible.

“I can theme a song simply by hearing a passing conversation, or simply from a topic I’ve read about. I was in a subway station with a friend a while ago in Moscow for example, and we saw this shrine dedicated to 42 people killed by two Chechen women suicide bombers, they’re now called The Black Widows. That stayed in my mind and I started to write the lyrics for the track on this album called Black Widows which I finished in about a week.

“I also get a lot of inspiration from reading books, oh, and my dog Stan, bless him. There’s a chorus in there that goes ‘My name is Stan I am the man, top dog you understand, I lick my balls because I can, you don’t mess with Stan the man.’

“We completed the album working 13 hours a day for twelve days at The Chapel studios near Louth in Lincolnshire. We went flat out, so we didn’t have time to get precious about anything.”

Whilst some bands don’t get on well as a team , they still produce great music, but there’s something special that Rhino feels is a vital ingredient within Rhino’s Revenge, as he explains.
“Yeah my kids. How cool is it to have your own kids in your own band? It was a real team effort with my sons Freddie on guitar, Max on drums, and my daughter Mae guesting on vocals. We also have multi-instrumentalist Matthew Starritt on guitar and occasional trumpet. My kids have evolved into first class musicians, it’s amazing to have them in my band, not because they were cheap to hire of course. Max is a solid drummer and Freddie’s a great guitarist that was apparent when he stood in for Rick Parfitt at Status Quo’s Clumber Park concert in Worksop, Nottinghamshire in August 2014. Like Quo, touring and recording with this band was a total pleasure.

“They’re obviously younger, but they pick it up so quickly and I don’t mind passing on the live concept, where to put the weight, fill the gaps and where to leave a hole. I’ve learnt a lot playing Quo, it’s been a hardworking band for decades, a riveting journey.”

Sharp-eyed Status Quo fans may have noticed a backline change in the bass department in recent months…
“The last time I gigged in Europe with Rhino’s Revenge, I used a Markbass rig from another band on the same bill, and it blew me away, I was smitten. So when I got home, we hired Shepperton Studios near London and fitted it out with a host of the big names in the bass amp world. The Markbass stood out a mile as the best for my style of playing. I’m using the F1 bass heads and four ported 4×10 cabs with horns, ideal for a rhino. On this recent tour, we had a row of AC30s on top for Freddie and Matthew split so they could hear and control each other, but they couldn’t control me… ha ha, I was loud. It packs a punch that just suits my playing, it looks cool and it’s lightweight, a totally portable transistor built bass head.

“Like all amps though, it has far too many knobs, I just want one that says ‘very loud’. I never used pedals, this is bass, it needs the front end loud and clear, and I know it’ll be reliable, as it’s transistor built. It sounds amazing, I don’t go for all this warm valve shit in the bass amp world.”

Rhino is still using the aptly-named Status Graphite basses, built by Rob Greene, and there’s certainly not going to be any changes, now or in the future.
“For me, there’s no better bass out there. I’d been using the Status Series 2 model in Status Quo from way back in the 1980s. This became my flagship signature model called the Charger launched around 2004, also with the Red Claret finish, optional LED position markers and back-lit Rhino horn at the 12th fret. I would never use anything else. They floor me every time, they just do it all live and in the studio, and first choice for this album and the tour. I wouldn’t use anything else.

“When I recorded the Black Widows demo track I used my ’63 Gibson EB3 to experiment with a really beefy overdriven sound, but I couldn’t emulate this in the studio for the album, so we used the bass track from the demo. It’s a bit of a low-end mean bass, which I bought from Vintage & Rare, London. I walked in the shop saw it on the wall, and thought, what an idiot I am, why have I never owned a cherry red Gibson EB3 in homage to my hero the late, great Andy Fraser.

“At a young age he could play with such a groove and invention, and how lucky it was for him to meet Simon Kirk. Like all really good drummers, Simon plays the song and just keeps it heavy and steady. Together, they were an awesome rhythm section, which of course is my role within Quo.

“I find this essential when recording, as long as I have the drive underneath, the guitars or keyboards will float on the top. Bass players always moan about being too quiet, so I’ve mixed myself way up front on this album. Saying that, Alan Lancaster in the early Quo was really loud in the mix using a Travis Bean bass and a punchy Fender Mustang.

“Bands were really loud back then, there’s no doubt about that, but there was so much headroom within their live sound which allowed the instruments to have their own space. Nowadays we have such massive guitar sounds, that everyone is competing and fighting for their own territory.”

A lot of bass players have to use a pick to create the tight, low-end rock mantle for the mid-to-high range of Rossi and Parffit’s Telecasters to float on. For Rhino, it’s all in the fingers.
“I’m at home using my fingers, my hands and wrists are strong and I do play quite hard, so I can get more of a rock sound within a low end cutting edge if I need to. There are some amazing finger bass players out there, Steve Harris from Iron Maiden and Black Sabbath’s Geezer Butler for example.

“I’ve also become friends with Chris Wolstenholme the bass player in Muse who also supports Rotherham, that’s how we met. He often plays with controlled distortion which inspired the overdriven bass on a track called Take ‘Em Down, a very serious song with B-movie overtones.

“I’m pleased with all the tracks including Today Is Tomorrow, which is all about giving up drugs, and another called All The Girls Love A Bastard, which speaks for itself. They all say something, well except One Note Blues maybe, which is all about one note, as in, a fast A minor little finger job, very much in the Quo musical genre.

“It’s all about ‘getting to rocking’, my new catch phrase, as in playing very loud and showing off, it’s just the best feeling. Fingers and noise… long may it last I say.”
Visit Rhino’s Revenge for more.