AC/DC, The Who, Lenny Kravitz, Bon Jovi – all these greats have had the pleasure of Vintage Trouble opening for them. Now, after four hardworking years, ‘everybody’s favourite support band’ have finally cut their second album, 1 Hopeful Rd. 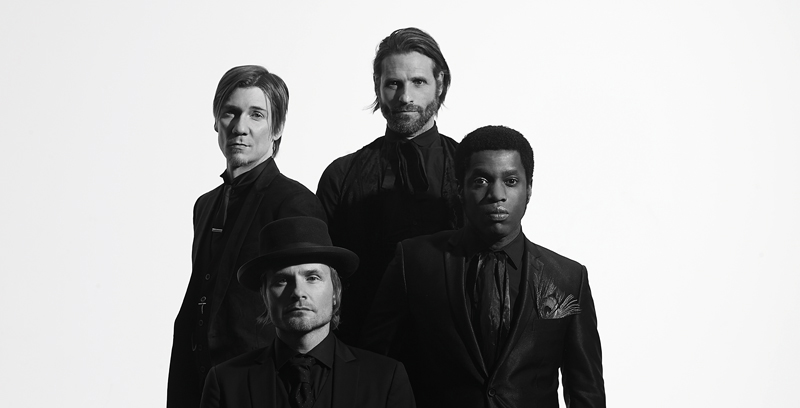 ‘‘We started with 37 tunes,” says bassist Rick Barrio Dill, “pared them down and only 12 made the record. We wanted to make a real LP that was a journey from start to finish, the best songs we could. And I think we’ve done that.

“It’s a big difference from the old album [2011’s The Bomb Shelter Sessions],” remarks guitarist Nalle Colt. “We brought in a real producer this time, Don Was. It was very song-focused. I tried thinking about guitar solos more, to go into almost David Gilmour (territory), trying to write out solos and find really melodic things; this other side of me that I wanted to bring out, so I’m really proud of it.”

Swedish-born Colt reveals that half the songs are stage favourites and the other half are new – “which is nice,” he says, “because you get the energy you have from the newest babies, but at the same time we had so many that were road-tested, things lots of fans will know, that should, could have been put on a second record years ago.

“My Heart Won’t Fall Again and Soul Serenity are my two favourite new ones, and two older ones are Strike Your Light and Run Like The River. We’ve been closing our set with Strike Your Light for a while – it’s a monster, upbeat thing that was inspired by our fans, the Troublemakers, in LA and London, who gave us the ability to think that we could fly and that, if we fell, they could catch us.”

Songs, explains Colt’s bassist buddy, “come from anywhere. Sometimes, Ty (singer Ty Taylor) will have the core of an idea – he writes the lyrics – and he’ll bring it in and then we completely destroy it and turn it into something else. Angel City came out in an hour; inspiration comes from all different angles.” 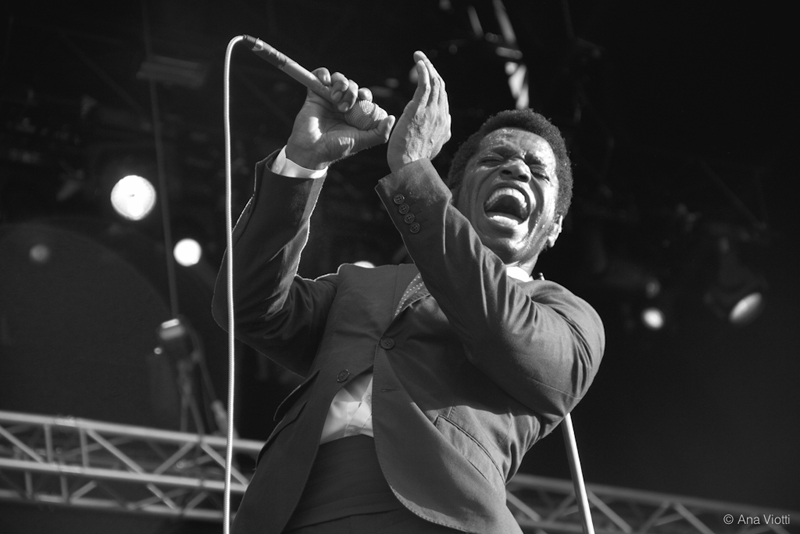 Coincidentally, both men have recently changed their instruments of choice. Fender man Barrio Dill’s transition from Jazz to Precision was sudden and unexpected. “It’s funny, because I was a Jazz guy for so long – still am, in a lot of ways. But I got into [James] Jamerson and [Bob] Babbitt and that Motown sound…”

“I’ve got a ’62 with a slightly smaller neck, that Fender American Design Experience did for me. I got into a P Bass because, with Richard [Danielson]’s 26-inch kick drum I thought the Jazz was the way to go because it was coming up over the top of it sonically. My whole mission is to be heard and less to be felt, because you feel Richard already. But the more I dug in, started rolling off bottom and making it more percussive, the P Bass answered that call.”

Colt is a recent convert to Gretsch, having forsaken his lifetime squeeze, the Les Paul. That said, there’s more than a hint of Gibson about his new love which, he reveals, took a year and a half to perfect. “It’s my signature guitar, and I’m very excited. Luckily, I got it before the album was recorded, and 99 per cent of the guitar on that is the Gretsch. It’s based on a ’54 Duo Jet.”

“I sat down with Steve Stern, who works for the Gretsch Custom Shop, I showed him my Les Paul and we talked about what we could do. I was intrigued about getting a hollowbody guitar, because I’d always wanted to get that Scotty Moore/Chuck Berry kind of tone.” 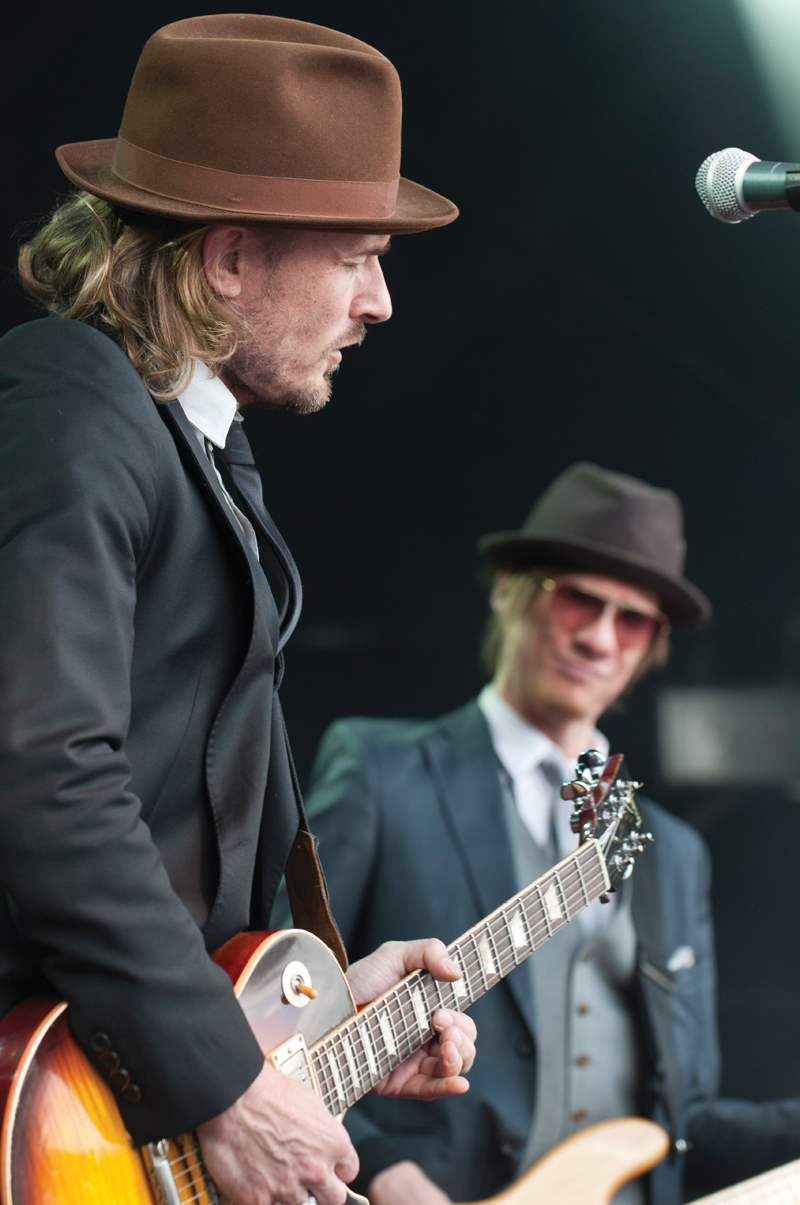 “We ended up with a weird hybrid between a Les Paul and a Duo Jet. The pickups look like Filter’Trons, but they’re made by Monty’s Guitars in London – they’re humbuckers, and it’s wired inside like a Les Paul; we took off the master volume. The neck is basically a straight Les Paul neck. It’s got a Bigsby tremolo, ’cos I thought if you have a Gretsch you gotta have a Bigsby on it! With that, there’s less tension, so I can use heavier strings – .11 to .54.”

“I put a TonePros bridge on it and it ended up being a great recording and touring guitar. I’m all for trying to find my own personal tone, something that sticks out as my own thing. The Gretsch really brings that out, so I’m happy to say it’s my main guitar now.”

Colt’s acoustic of choice is a Taylor. “It’s on Soul Serenity, at the end of the new record,” he says. “Andy Powers, the master luthier, built it. It doesn’t have a name yet, it just says ‘prototype’, but I’m really proud to play it. I’m grateful to Taylor for being so supportive and building me guitars that play so well.” 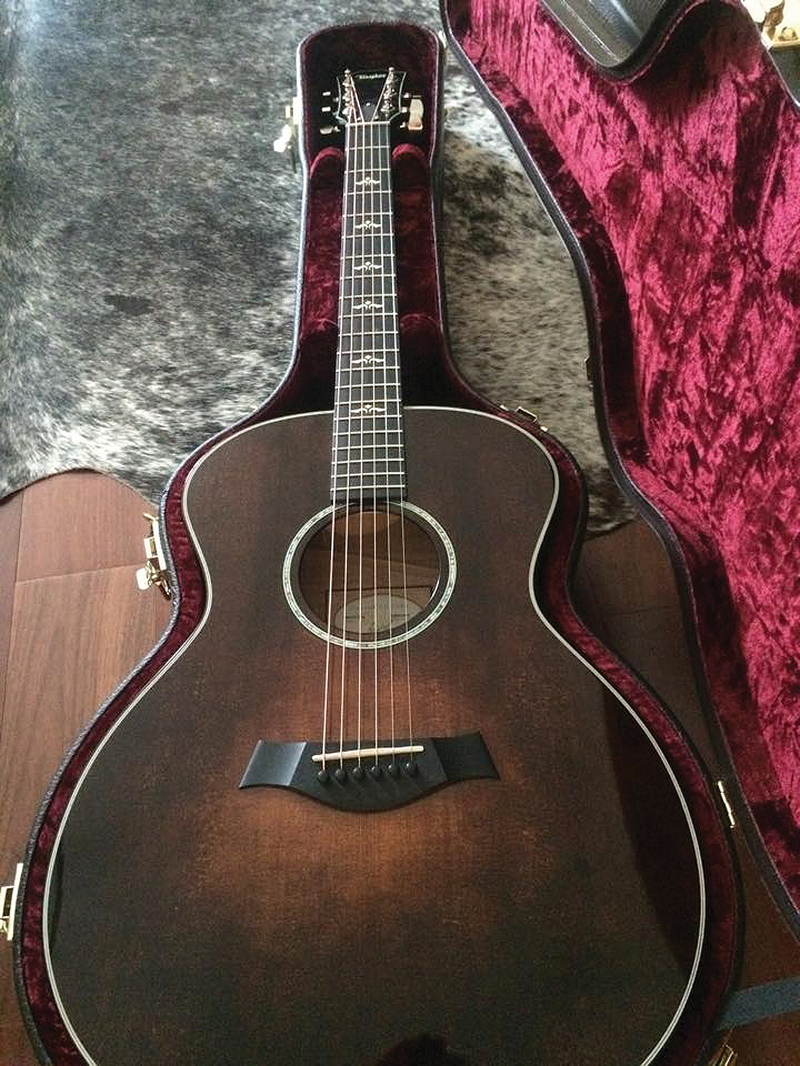 While Barrio Dill played a Guild on the band’s Swing House Acoustic Sessions EP [check out the video on their website], he has reservations about acoustic bass on record. “The Guild is amazing in the room, but to get that to translate to recording is a different story.”

“I use a [Fender] Kingman on the road backstage, and have used it in radio sessions, but when we did an acoustic thing for Obama [they played presidential benefit dates in 2012] Nalle used an acoustic guitar and I used a P Bass with flatwounds and my little flip-top amp. I love the sound of an acoustic bass if you’re live… but that combination sounded better, dare I say it, on record.”

The name Vintage Trouble suggests a band with an eye for the building blocks of rock – instruments and amps that help them create a vibe. “It’s a philosophy,” Barrio Dill explains. “We definitely come from the 50s sensibility, in terms of trying to obtain that timeless approach to songwriting, and the original styles rhythm and blues, soul and early rock ’n’ roll came from. R&B nowadays is Rihanna and Chris Brown – for us it’s Ike and Tina Turner, it’s Chuck Berry.”

Barrio Dill’s choice of studio amplification – a 1967 fliptop B-15 Ampeg – is certainly vintage. He also had an Aguilar DB 750 with a 6×10 cab, and both were mic’d up. The final component was a DI box built, it is claimed, out of components used in the Motown desk in Hitsville, and sourced by Don Was. These were used in combination, depending on the song. 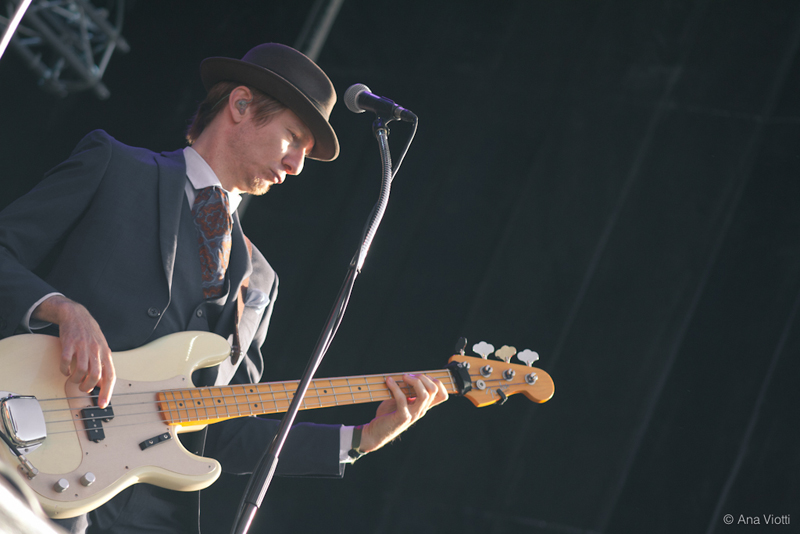 “Live, it’s Aguilar all the way,” Barrio Dill explains. “They’re like Mercedes, in my opinion; wherever I am in the world, I just need to look at an Aguilar DB750 and a DB 4×12 turned on its side and that’s it. That can be my soundcheck – I don’t even need to turn it on. If I go to Australia, if I go to Japan, I know exactly what it’s going to sound like.”

“I don’t really use any effects live, though I have used an [Aguilar] Agro [bass overdrive] pedal on this AC/DC run, just for a little extra teeth in a stadium situation. But most times, I pride myself on using a P Bass with flatwounds, volume and tone on the bass and a tuner.”

The shows with AC/DC saw a mismatch on the guitar amplification side, with Colt’s pair of Lazy J amps dwarfed by Angus Young’s massive Marshalls. “I love it – those two tiny 20-watt tweed amps growl like crazy,” he enthuses. “For this tour, Jesse [Hoff] made me a head that I use for the guitar ‘Leslie’. So I have three Lazy Js running at all times.”

The guitar ‘Leslie’ he is referring to is a Fender Vibratone, which helps him thicken the sound of the band’s solitary guitar. “This time, I really brought it into the mix as almost a secondary instrument. We emphasised it a lot – put headphones on for Another Man’s Words and you get almost an organ vibe.” 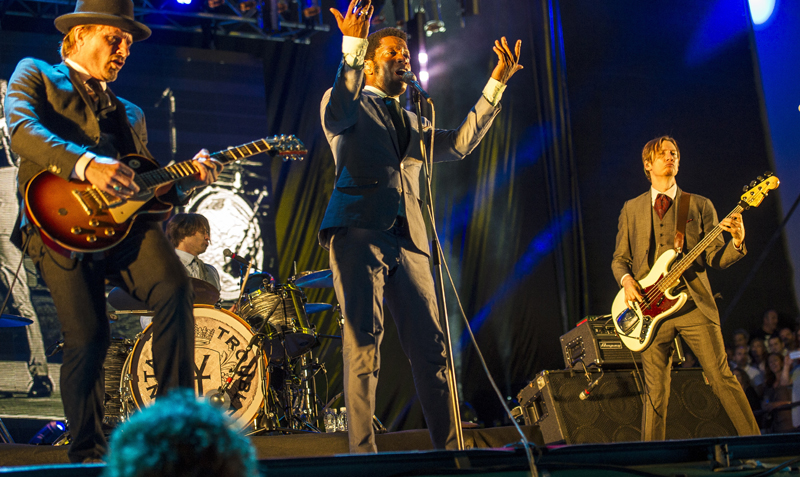 His pedalboard, the guitarist explains, has slimmed down somewhat over recent years.

“I want to home in on the guitar. You can get so much tone out of tone controls and volume knobs…”

The latest effect didn’t make the new record, but Nalle is raving about the SoloDallas Schaffer Replica, a wireless unit Angus Young, by coincidence, has used as a clean boost. “You can turn down the guitar and really compress it into the amp. That’s something I learned from touring with Brian May; he got it from Rory Gallagher.

“It brought out such a warm, beautiful sound, from clean to madly rough overdriven, just using the volume on my guitar. Now I never turn it off. It’s an incredible little thing – it makes your amp so dynamic.”

The other effect he runs all the time is a Strymon El Capistan tape echo for a cool slapback effect. “I used to listen to Scotty Moore, and it was all about tape echo to create that really nice space,” he says. “It works really well for rhythm guitar.”

“Other than that, I have very few pedals. I have a [LovePedal] Pickle Vibe that I didn’t use on the AC/DC tour, ’cos we don’t play the songs, and a Voodoo Lab Proctavia pedal to get that dirty Hendrix tone. It’s cool to bring out on an old song called Total Strangers, because it really cuts through.”

The band’s recent tour with AC/DC saw them play in Austria to 120,000 people – the largest show the country had ever staged. “It’s like the Olympic Games,” says Colt. “You have 45 minutes to convince these people… [laughs], so it gives me a huge amount of adrenalin. It’s been a great journey so far. I think we’ve played to 1.4 million people in a month and a half!” 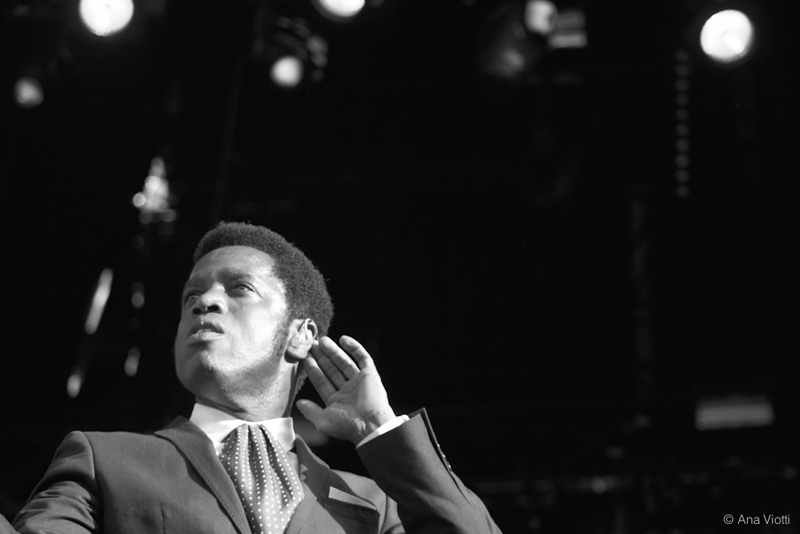 “The one thing we learned is that anything you do with your body you gotta do tenfold, because to most people in the stadium you’re a tiny little Lego figure. Movements express your energy, and it comes naturally to us.”

Colt’s also enjoyed what he calls ‘masterclasses’ from some of the best in the business. “I can sit and watch Pete Townshend playing for 51 shows in a row, now I can see Angus play, Lenny Kravitz and all these guys – true performers. I try to learn what they do, how they do it, why they do it and what I can make my own. I’m so honoured… it’s like Christmas every night!”

The road to Wembley

For Barrio Dill, playing Wembley with AC/DC was an achievement. “But we’re barely at base camp staring up at Mount Everest,” he contends. “When you look at their 40 years and all the fans they have, singing their hits for two hours, it’s inspiring because you realise there’s so much work for us to do – and so much hopefully in front of us. 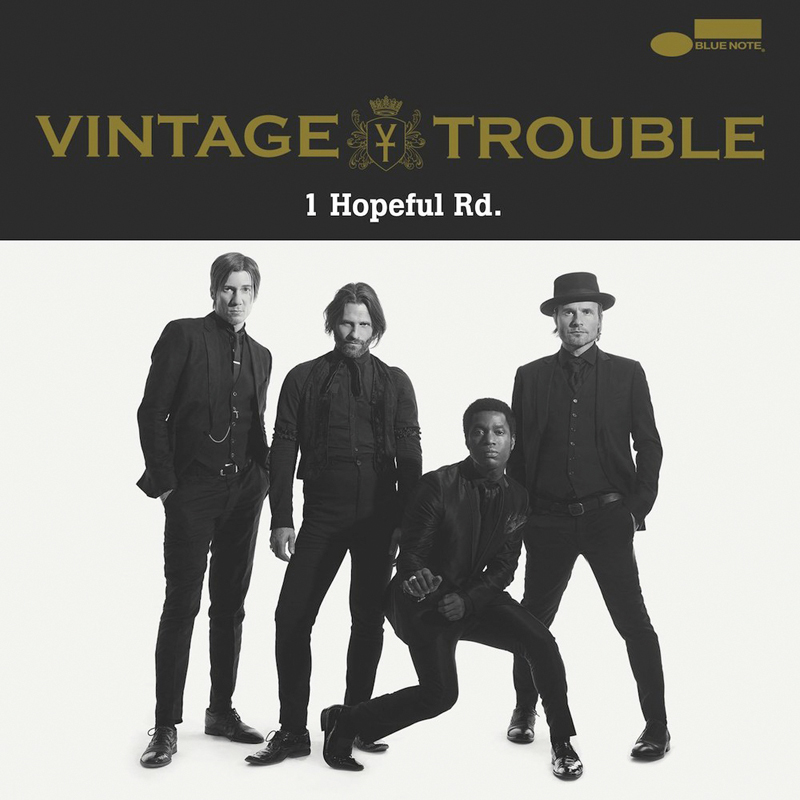 “One thing we have going for us is that we are a live band first and foremost. You come see us and we promise we’re going to leave you with something. That’s a currency you can’t fake nowadays, and I think people see that… We’ll carry on trying to deliver that as far and wide as possible.”

The last word goes to Colt: “AC/DC have sold out every show on this tour. Hopefully, we can start getting closer to doing the stages they are doing. It’s a massive carrot in front of us. We’re learning how to take an audience of 100,000 and make it feel like a little sweaty blues club – then you’ve done your duty.”