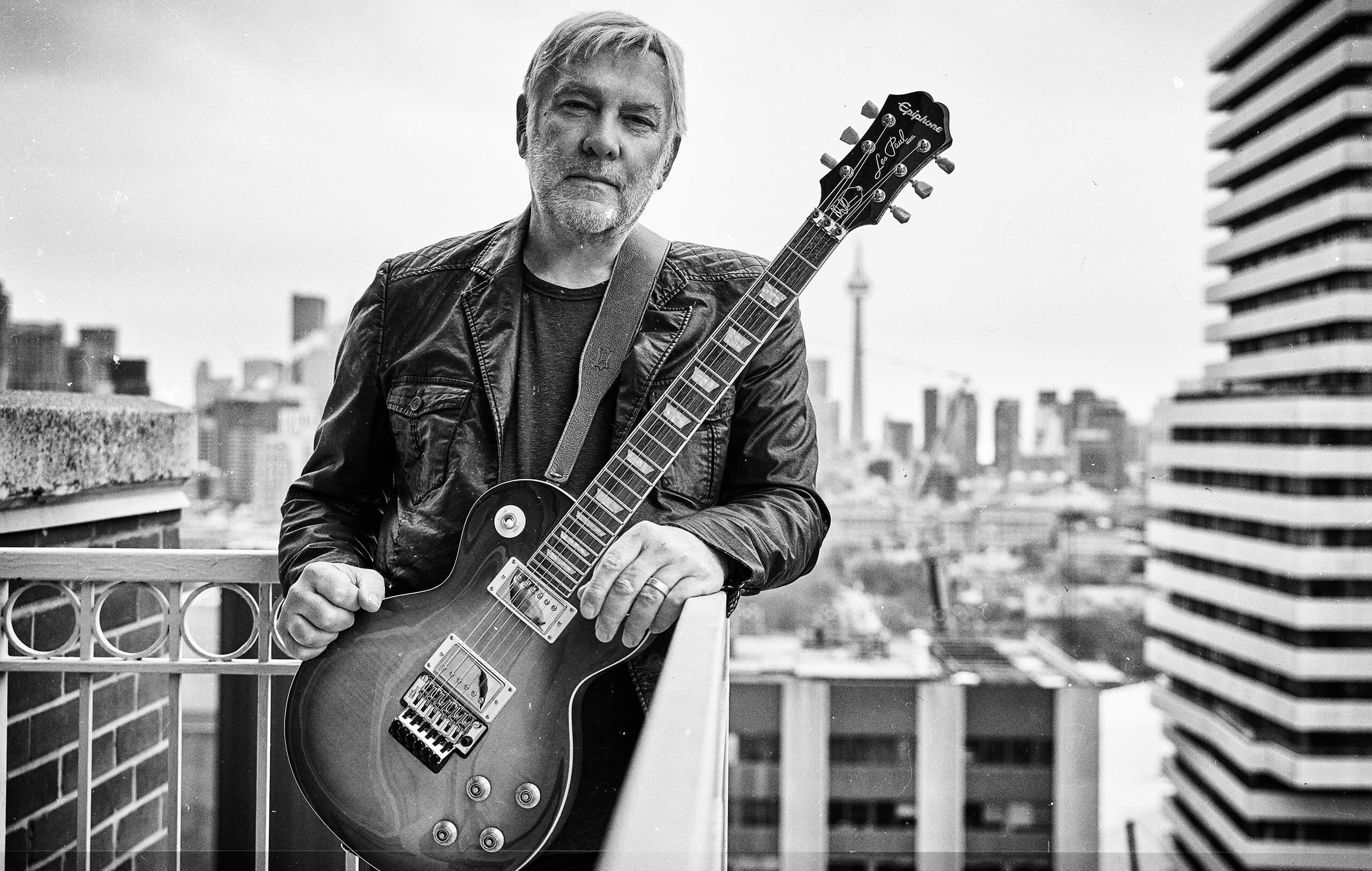 “One of the most difficult things I’ve ever done in my life”: Alex Lifeson on auctioning off his prized guitars, the end of Rush, and his new band

We chat to legend Alex Lifeson about Rush, contributing to other artists’ music, his new band Envy Of None, and kissing goodbye to his iconic 335.

How do you call time on a 50-year career? Well, it seems you don’t. The heart-breaking loss of Neil Peart to brain cancer in 2020 spelled the end of Rush. However, that hasn’t halted the questions about whether Rush will continue to record and tour. Given the close relationship of the band’s members and the contribution they each made to Rush’s legacy, it is understandable how Alex Lifeson and Geddy Lee might find questions of recording under the banner of Rush a little disrespectful.

The end of Rush, however, does not mean the end of Alex Lifeson. Unbeknown to many – given his general absence on social media – Lifeson contributes to many artists’ albums, and has throughout his career.

However, it’s Envy Of None – a band almost accidentally formed following an approach by bassist Andy Curran five years ago – that casts Lifeson back into the prog limelight. But the initially amorphous project only began to take shape following the introduction of Maiah Wynne, introduced to Lifeson via Curran after he had been one of the judges who voted her a winner in a songwriting competition. The band have just released their debut album.

However, there doesn’t appear to be any world tours on the cards for Lifeson. And “sitting on the edge of a bed going through the TV channels waiting for the four o’ clock soundcheck to come round” isn’t exactly something he’s pining for, especially as that wouldn’t involve his two best friends anymore. Instead, Lifeson has engaged in a period of decluttering over the past few years, with he and his wife focused on divesting themselves of possessions accrued over a long and successful career.

He’s “trying to get a little leaner”, a process that includes the thinning out of his guitar herd by auctioning them off for charity. Included in the charity auction is his iconic 1976 Gibson ES-355, a guitar synonymous with Lifeson and one that has accompanied him throughout his entire career.

We sit down with the prog god to discuss his future outside of Rush and without touring, and how difficult it was to say goodbye to his beloved 355.

How did Envy Of None come about?

I was approached by Andy Curran five years or so ago. He was just working on some ideas that he had and asked if I could just throw some guitars down. There was no talk about a ‘project’ or anything beyond this casual sort of arrangement.

Sometime later he met Maiah [Wynne] through a songwriting contest that she was involved in and won, and he was one of the judges. They had a conversation and he said, ‘You should really work with some people to develop your songwriting’. And she said, ‘Well, what are you doing?’”

Were the bulk of the songs written before Maiah’s involvement?

No, not really. I think Shadow might have been the first one, Liar and Enemy. I think those were the three songs that were in shape for her to do vocals on. And it was after that that we started to fill it out, started throwing more ideas, got more involved in the community of songwriting. 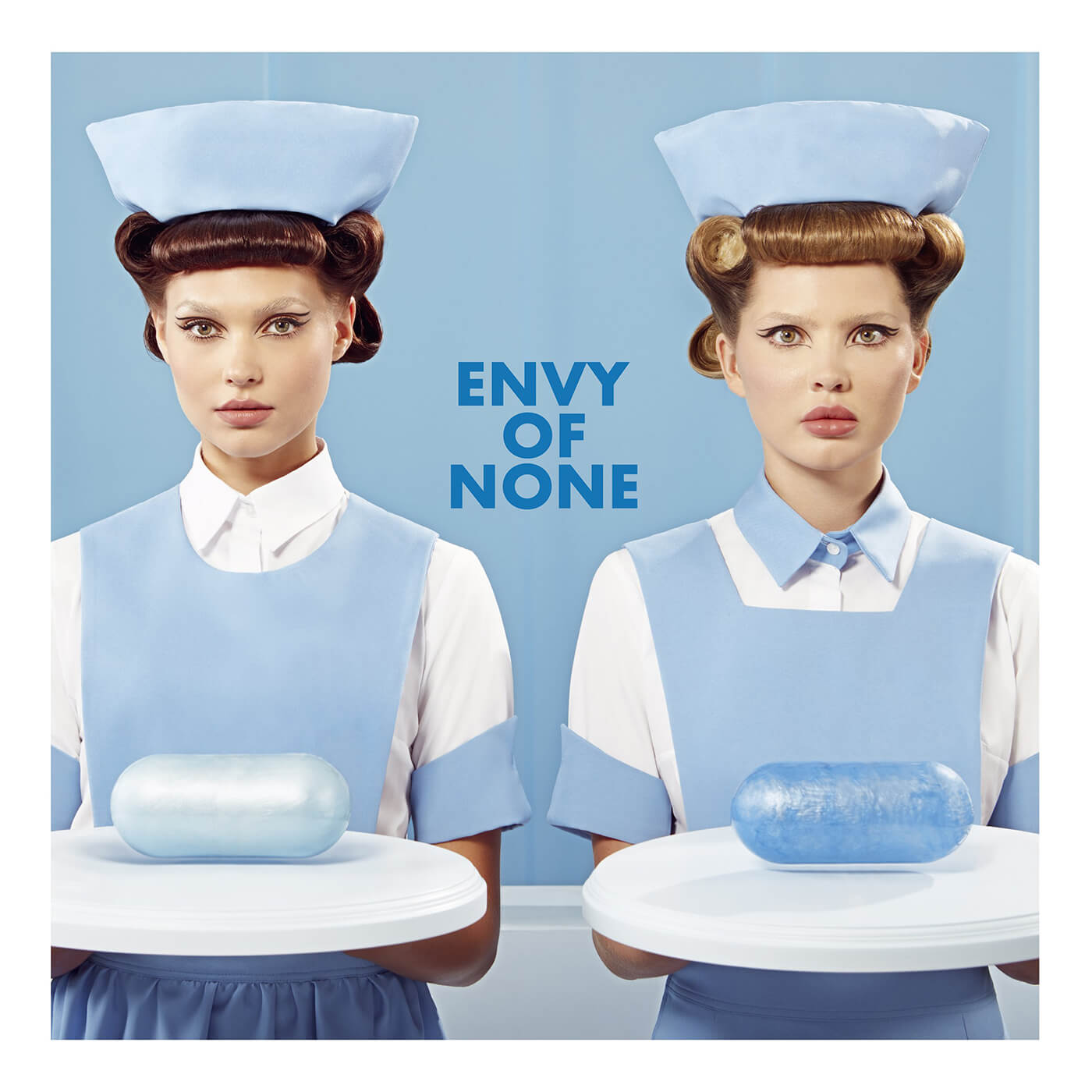 Throughout the album, your guitar is understated, rarely taking centre stage

I love being in service of the song. Alfio [Annibalini] played some great guitar parts and I never once wanted to redo anything that he did. I thought they were all effective and were the proper part for the proper spot. The great thing for me is it just allowed me the freedom to work around everything that was there and create soundscape elements that don’t sound like guitar.

So that was a great challenge that was really rewarding for me. To target those sort of elements and follow through and not have to worry about, you know, playing ‘guitar parts’. I also played a lot of acoustic. That’s always fun for me.

What kind of acoustic guitars were you using for the album?

I think I used a baritone in a couple of spots as well, and my original Epiphone Dove from 1976. I used Nashville tuning a lot – that’s an effective tuning that I’ve used a lot over the years. 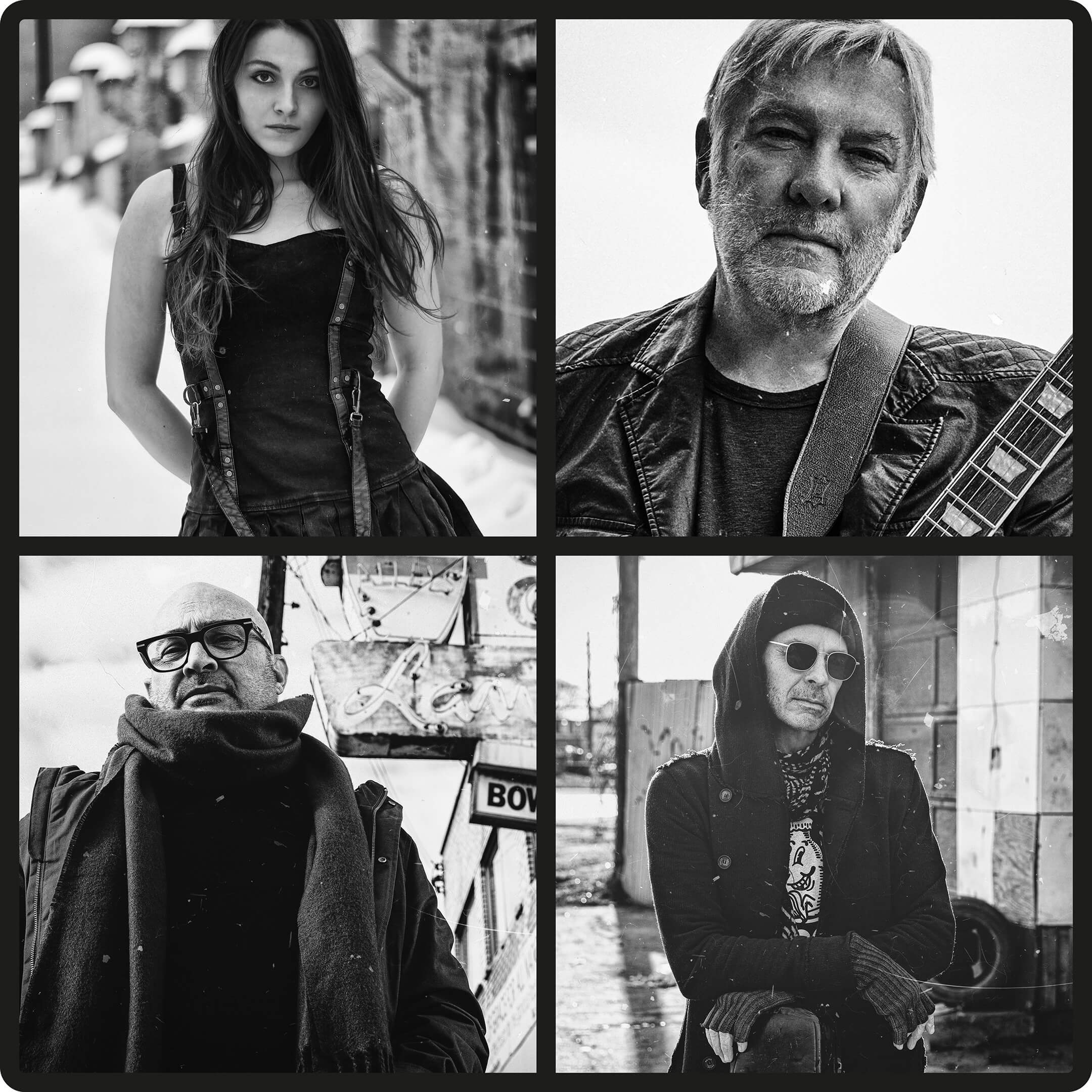 Did you just mic up cabs or were you using digital modellers as well?

I would set up a small cabinet with a single Celestion 12-inch and would mic that with maybe a Shure SM57 or a Sennheiser 421. The plugins all sound amazing but they sound like they’re just pasted onto the screen, you know? They don’t have that depth and it’s hard to get them to sit in a track, where they’re inside the track rather than just on top of the track.

I did get a Cab Clone from Mesa/Boogie recently. This thing’s amazing. I love it! It has a lot of different settings for different cab sounds and filters, and it sounds really good. So with all the analogue front end that I have, I can get a nice deep, full sound. I have lots of options: one of my Lerxst heads; a Matchless; a Bogner; and I have one of my Marshalls in my closet.

You’ve contributed guitar to many songs and albums over the years. How do you approach these sessions?

When I set out to play on somebody else’s music I always try to do something that they’re not expecting, and I’ve done well in that capacity. Almost every project that I’ve done, they’ve come back and said, ‘I never in a million years would have thought of that piece in that song but now I can’t hear it any other way’. That, to me, is success. 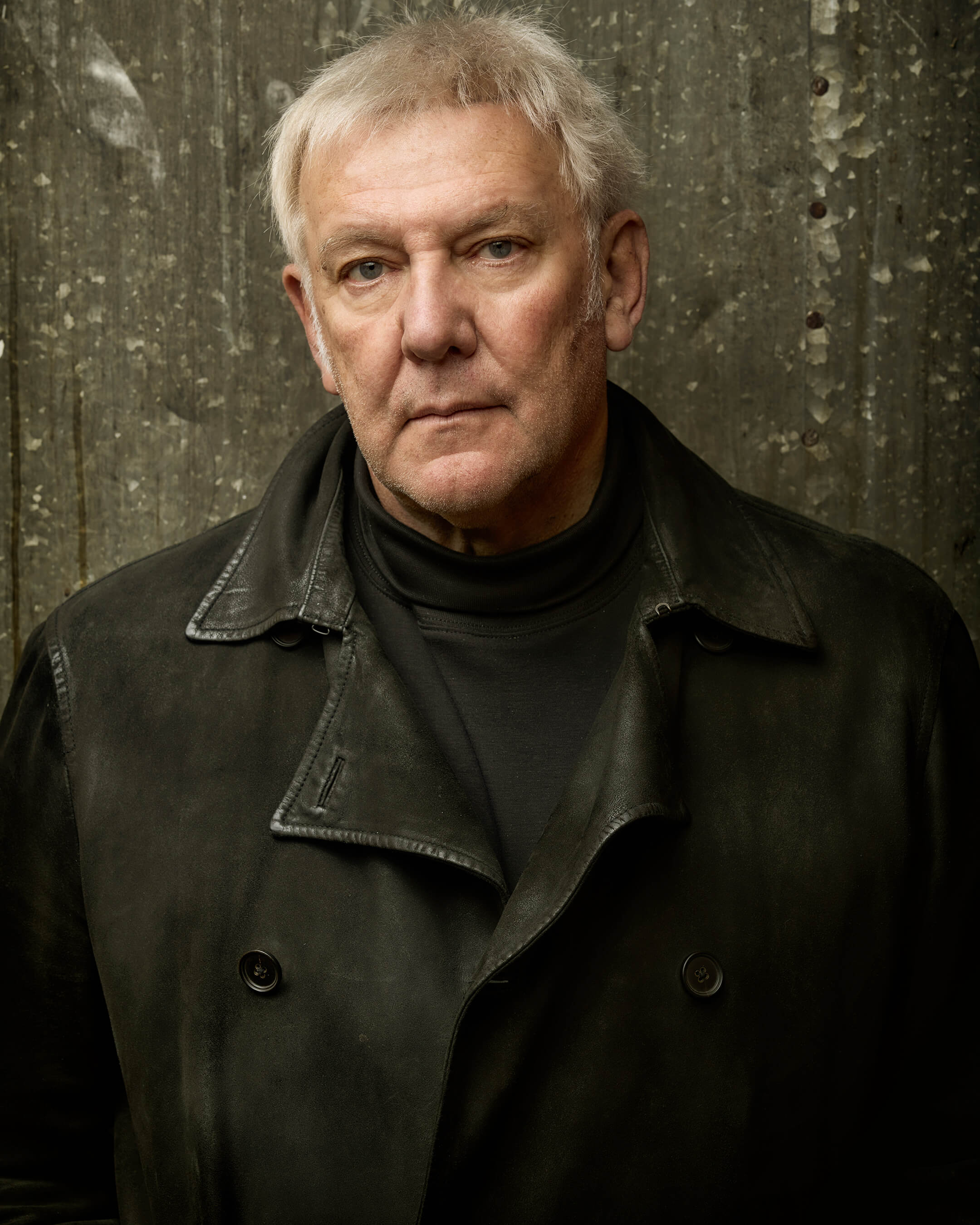 Do you feel more creative freedom at this point in your career?

I completely do. I have to say that after the last [Rush] tour in 2015, I didn’t mind having a little bit of breathing space afterwards. I was heartbroken that it was done but, as time progressed and we learnt of Neil’s illness and dealt with that over the course of three-and-a-half years, it was a lot, you know? Then we were confronted with this pandemic. It was one thing after another.

But my wife and I, we’re at a stage in our life where we just feel like we have too much stuff and we’re trying to get a little leaner. I’m auctioning off the bulk of my guitar collection for charity. I’m looking forward to that. It was probably one of the most difficult things I’ve ever done in my life; it was so emotionally difficult packing those guitars up. I cleaned them, polished them, did string changes. I made sure every single one was in tune when it went back in the case, and then I kissed it goodbye.

That was the last one that was left. I was sitting in our mudroom, just off our garage, while the removal truck was waiting. I sat there with that case in between my legs and, maybe it sounds a little corny, but I was talking to it. I was reminiscing about gigs that we did together and kissing the bubble wrap. But I know that, with the funds I’m hoping to raise, it gives it all another life and helps other people, and in some cases gives people another chance at life. Why wouldn’t you do that?

We’re trimming down. [Envy Of None], after working on it for a year, has just made me feel like the horizon has opened up. What we did with Rush was remarkable and there are few bands that have that kind of longevity. We worked hard and we were proud of the work we did, and I love it all. But I still have life in me. I still have a love of music. I still wanna explore other areas that make me a better musician. 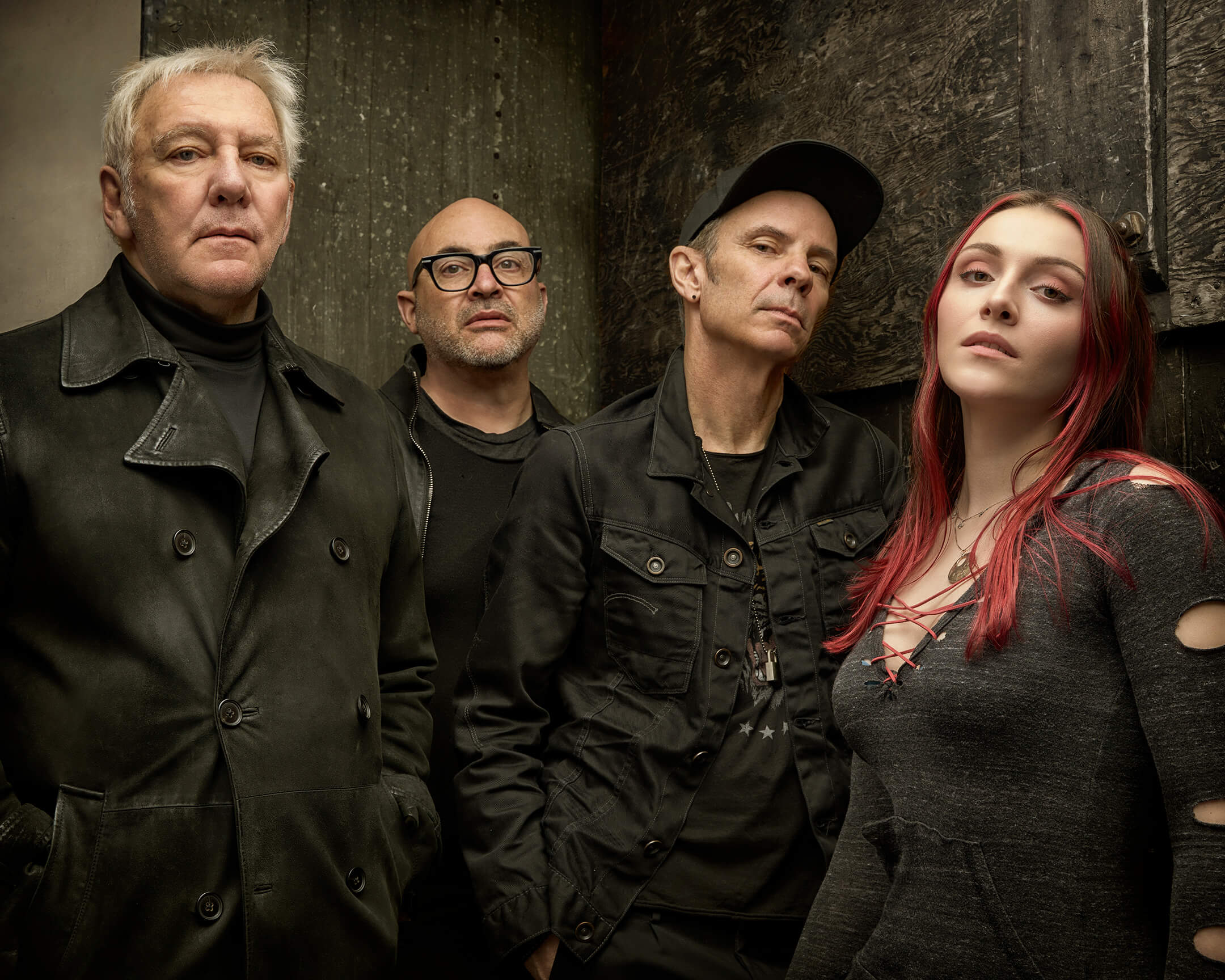 Can you see Envy Of None performing live?

We get asked this question a lot and I’m done with touring after over 40 years. It’s not an easy thing to do. You have to train yourself and you have to be patient and disciplined. It’s easy to get into bad habits on the road and to be bored and feel like you’re missing out on your life.

When I was in California spending time with Neil, it just occurred to me, when we were sitting on his little balcony watching the sunset in Santa Monica Hills, the peace and serenity and the finality of the end of the day as the sun sets really struck me. It was a very poignant revelation that I had at that moment. In so many ways, I thought this is so appropriate for the way I feel and for this experience that I’m going through at the time.

I really feel it when I listen to it. It grabs your heart and there’s something about just the melody and the sounds and how it flows that makes for the perfect ending for a lot of things, including this album. It’s not meant to be a sad thing; it’s meant to be more celebratory in a way but respectful at the same time.

As one of the most famous prog rock bands ever, there are many fans that deify Rush. Have you ever been star-struck?

There were many times. But one that really stands out for me was in 1998. Geddy was on a trip to Morocco and he met Robert Plant, as they were staying in the same hotel. But it wasn’t until the last day that they acknowledged each other; they’d sorta pass each other in the hall and kinda smile and nod their heads. On that last day, Geddy said to his wife, “I’ve gotta go over and just thank him for what a great inspiration he was for me growing up as a musician”. He went over to his table, you know we’re always uncomfortable to do something like that, and he said, “Excuse me, Robert, I just wanted to say…”, and he said, “Oh, Geddy! Do sit down, let’s have a glass of wine! Finally, I was waiting for you to come round!”

The following day when they saw each other, Robert said, “We’re going to be in Toronto later this summer, bring Alex down to the show, it would be great to see you”. So we went down. We went up to the elevator, up to the dressing-room floor, and we were chatting with Robert. He’s such a wonderful person. During the conversation he says, “Hang on, I’m just gonna go get Jimmy to come in and say hi,” and I was like [gasping, shaking and stuttering] “… Jimmy Page? You mean Jimmy Page?” I couldn’t believe it! He came in the room – I was so nervous! But he was so gracious and so nice. This is when I discovered it’s always a bigger deal in your own mind than it is when you meet somebody.

Envy Of None’s self-titled is out now.