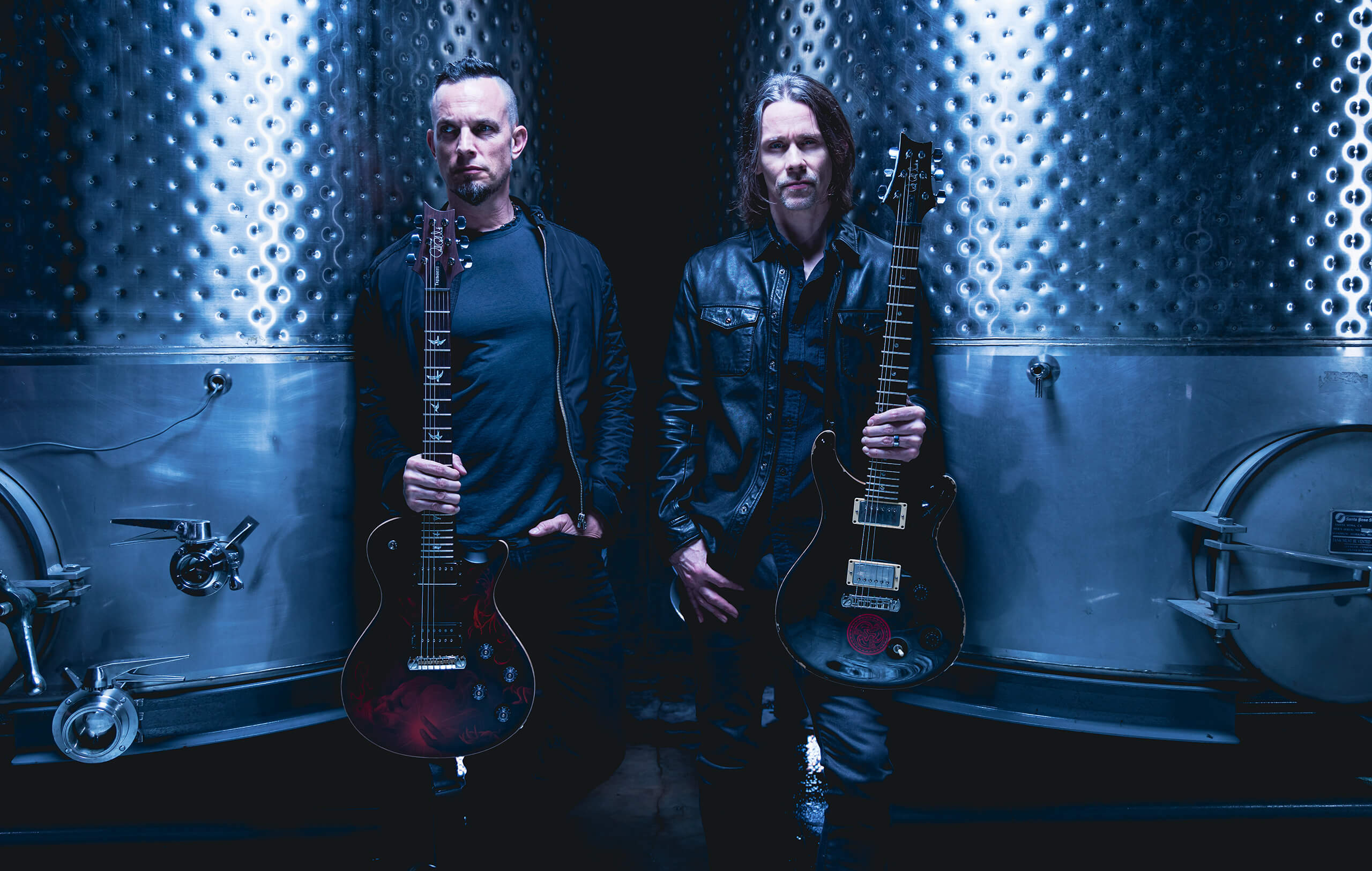 Alter Bridge on their lack of mainstream recognition, 15 years of Blackbird and why they need a gimmick

Mark Tremonti and Myles Kennedy look back on their greatest guitar moment, the Creed hangover that hampered their success, and why they’re happy not being the coolest band in the world.

Alter Bridge are living the high life. For our interview with the band’s guitar fulcrum – frontman Myles Kennedy and co-founder Mark Tremonti – we’re summoned to the Royal Garden Hotel in London’s fanciest borough, Kensington. Upon arrival we’re guided into a mezzanine bar that overlooks an expansive lobby. Beyond that, on the other side of the building’s two-storey-high front windows, are well-dressed businessmen strutting out of jet-black taxis. It’s all very fancy for a band that – let’s be honest – nobody talks about.

Don’t get it twisted: Alter Bridge are wildly successful. Every UK tour they’ve done in the past decade has crammed arenas around the country. Every album they’ve released since 2010 has cracked the top ten of the British charts. And, most famously, one of their songs has been the entrance theme for eleven-time WWE Champion Edge since 2005.

Even with all those credentials though – and in spite of the fact that they routinely belt out melodic metal anthems – you will never hear this Floridian four-piece on the radio. They’ve never been darlings of the rock media, and you’ve never seen them on a tour package supporting such superstars as Metallica or Iron Maiden. What gives?

“I think there are a few reasons,” Myles answers when he and Mark join us in the dimly lit bar. “It could have something to do with my approach to singing: it’s higher and, when we started, it was more in vogue [in American rock] to be a baritone. And it’s because there was already a certain legacy established before us…”

Ah, yes: Alter Bridge have baggage. Three quarters of them – Mark, bassist Brian Marshall and drummer Scott Phillips – are former members of Creed. They co-founded their current band in 2003, when their old one was technically still a thing, amid tensions with singer Scott Stapp. Although they started afresh with Myles and quickly released debut album One Day Remains in mid-2004, the spectre of their ex-day job has always loomed: unsurprising, considering Creed were both monarchs of US rock radio and frequently lambasted for being a bit shit.

“We hoped that we would at least bring along a bunch of fans that we already had once we started making new music,” Mark reflects. “But it’s hard to get those new fans if the gatekeepers aren’t pushing it like they were in the past. I think, at that point, Creed were so big and so polarising that people were afraid of [Alter Bridge]. In the States, we did not get the love and support that we were used to.” 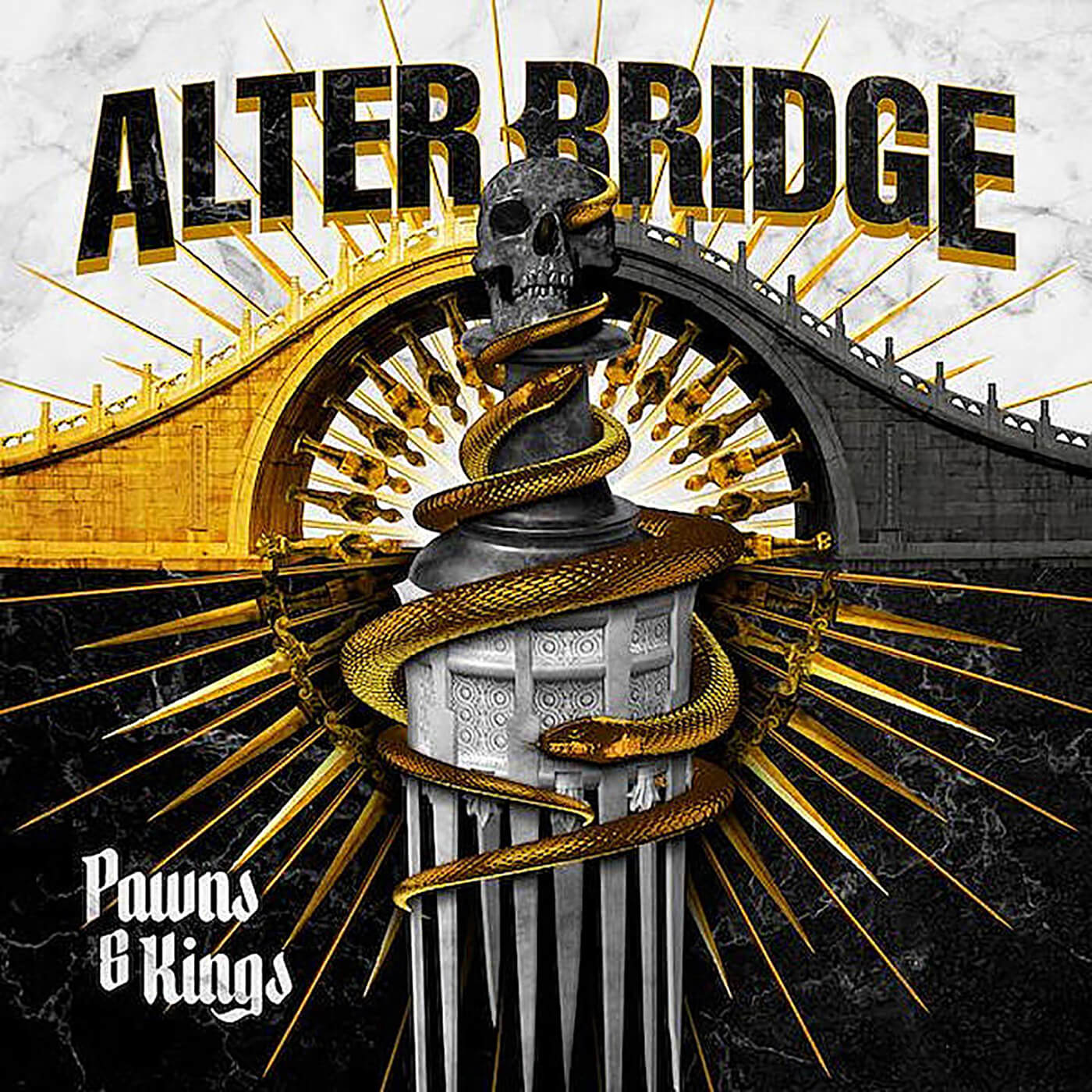 Alter Bridge may have suffered, and may still be suffering, from the Creed curse, but stick on their new, seventh album Pawns & Kings and they sound lightyears away from that skeleton in their closet with its arms wide open. The second that opening track This Is War starts, you’re bombarded with down-tuned staccato riffs while Myles’ falsetto wails hang in the distance. Then the verse takes hold in a flurry of chords, chugs and pinch harmonics, before the chorus implores you with Chris Cornellian howls to “Fight for your life!” It’s all heavy and invigorating enough to make you want to fist-fight God.

The rest of the album follows suit. Dead Among the Living explodes to life with thunderous percussion, each blast interrupted by whammy-pedal-contorted picking. Holiday is a cavalcade of pinch harmonics, its main riff built on the back of screeching strings, while Fable of the Silent Sun steals the award for longest Alter Bridge song to date. Its eight minutes and 22 seconds tumble from a delicate intro to distorted and isolated chords. It all amounts to the loudest and heaviest album that this band have ever released.

“That seems to be the general consensus,” Myles responds, “but, interestingly enough, I don’t think any of us thought that that was the case. I think it’s because it seems to be more of a riff-based record overall.” What was the driving force before, if not the riff? “Melodies,” the singer answers. He breaks into a cheeky grin. “And the cowbell.”

Equally as vital to Alter Bridge as their melodies and stonking riffs, though, is their solos. Myles and Mark frequently disintegrate their own calluses on Pawns & Kings, especially during that progressive behemoth of a title track. That’s why it’s so shocking when you remember that this wasn’t the plan: Myles – despite once working as a guitar teacher – only sang on One Day Remains. He wouldn’t play for Alter Bridge until midway through the album’s tour. “If you listen to [Myles’ pre-Alter Bridge band] The Mayfield Four, there’s no virtuoso stuff going on,” Mark explains. “Then I heard him playing jazz.”

“I was playing in the bedroom near our studio,” Myles adds. “This was between records [One Day Remains and 2007’s Blackbird]. He came to find me for some reason and I was playing to a jam track, just noodling and improvising.” Mark continues: “I remember seeing Queensrÿche opening up for AC/DC and both guitar players had solos going on all night. I thought: ‘Wow! That band are so talented! They have two lead guitar players!’ When I heard Myles play, it was: ‘Why in the world wouldn’t we utilise this?’ And he told me, he did win the Pacific Northwest Axeman Contest.”

Myles sinks in his chair and hides his face behind his hands. “I was dressed like a freakin’ pirate!” he loudly laments. “I was dancing around wearing big blue pants and a white, frilly shirt. It was obscene. I lived in Spokane, Washington, so you had the whole grunge movement happening just over the hill [in Seattle]. I found it so cool that they did their own scene, so I was trying to find something completely different, but went so far with it that I ended up in no man’s land. I’m such a dork sometimes.”

Who knew that that self-professed “dork” would one day be responsible for one of 21st-century rock’s best guitar solos? After One Day Remains reached number five on the US Billboard 200 but received apprehensive reviews from critics (many of whom still had the sour taste of Creed in their mouths), Alter Bridge leaned into their newfound twin-guitar attack on Blackbird. The title track was an eight-minute riffstravaganza that struck its apex with its duelling solo. In 2011, Guitarist magazine readers voted the fingertip-lacerating back-and-forth as “the greatest guitar solo of all time”.

“On One Day Remains, the ‘This is Creed part two’ crap drove us all nuts,” Mark remembers. “We already had a vocalist that sounds completely different to Scott, but with Blackbird and Myles also on guitar, we really got to turn the ship in the direction it’s heading in now.”

“That song took forever to finish,” Myles adds. “We had no record label and no management; we were barely surviving, but it gave us a lot of time to write.” The grin returns. “We all got paper routes to afford that record.”

“We needed to get from the second chorus to the last one with something interesting,” Mark adds. “We went into separate rooms and at the same time came out: ‘I got it!’ ‘Let’s hear yours!’ ‘Let’s hear yours!’ I don’t know who suggested we layer the two solos together, but that was a defining moment.”

Fifteen years after Blackbird, Alter Bridge have penned a pantheon of melodic metal hits (the singles Rise Today, Ties That Bind and Isolation have all reached the top ten of the UK rock charts) and progressive epics. Yet to so many they’re still just “that band that used to be Creed”: as recently as 2020, music critic extraordinaire Anthony Fantano called them “one pedal steel away from sleeping with your cousin. They’re the most ‘I drive a busted-up truck around’ hard rock I’ve ever heard in my life.” Rarely has he been further off the mark.

“We know we’re not the coolest guys on the corner,” Myles admits. “Our whole trip is about writing songs that come from the heart and that will hopefully resonate in other people’s lives for many, many, many, many years. We don’t have any gimmicks: we aren’t a bunch of super rock star types with a ton of swagger. But maybe we do need a gimmick…”

“Let’s put it out to the fans,” Mark laughs. “If we were to do a gimmick, what should it be?” We’d vote for Myles pulling the pirate outfit back out of the wardrobe.

Pawns & Kings is out on 14th October via Napalm. Alter Bridge tour the UK with Halestorm and Mammoth WVH in December.