“The day it’s hard for us to write music is the day it’s done”: Every Time I Die’s Andy Williams on balancing music and… pro-wrestling?

Williams and fellow Every Time I Die guitarist Jordan Buckley share their thoughts on balancing your passions, trying to do nothing for the first time in 20 years, and why they’re never going to abandon their hardcore roots.

Diamond Dallas Page’s hands are raised to the sky, fingertips touching in a familiar signal to the fans losing their minds at ringside during All Elite Wrestling’s Bash at the Beach. “It might be Diamond Cutter time!” the unmistakable Jim Ross yells on commentary. The Butcher, one of Page’s opponents in this freewheeling six-man tag match, gets to his knees, then his feet, and walks straight into the pro-wrestling legend’s finisher, ending up face down on the mat as icons including Ric Flair, Macho Man Randy Savage and Bret ‘Hitman’ Hart have done before him.

Four and a half thousand miles away, meanwhile, Every Time I Die are preparing to play their first show without guitarist Andy Williams in their 22-year history. After all, he couldn’t really be at the Watsco Center in Coral Gables to take that Diamond Cutter and in Paris to lay waste to the ornate Cabaret Sauvage venue all at once. Leading a double life, it appears, can be hell on your schedule.

“I was more worried about the guys’ reaction to me saying, ‘I’m going to take this wrestling gig over this’,” he admits over Zoom from Los Angeles, where the band are shooting a video. “But that was Diamond Dallas Page’s last match of all time. It was his retirement match. So, when you put that weight on it, the dudes were just like, ‘This is a once in a lifetime chance, just go.’”

At that point, Every Time I Die were also pulling things together to complete their incendiary new record. The metalcore hellraisers finished tracking Radical early in March of last year, just as the US stopped in the face of the Covid-19 pandemic. They stuck some new songs into the setlist for a sold out show in Chicago right before venues shuttered across the country, and then placed the album on the shelf in a move that will be familiar to musicians everywhere. What Williams did next, less so.

“You spend all this creative energy doing this beautiful record, you get out, you play one show and the entire world shuts down,” he recalls. “At that point in time I had been working with AEW but I was getting paid by appearance. If they booked me for a show, that was the only time I got paid. It seemed like that was what they were going to do with me and my [tag team] partner. But then they offered us the full contract.

“It was right when things started getting dicey with the pandemic. I was like, ‘The universe is really speaking to me. I have to do this.’ I’ve been listening to that record for almost two years, and every time our manager would hit us up because it was looking like we could book some shows, they would get cancelled. I dove headfirst into wrestling – if the other thing doesn’t come back, I need to set myself up. I went full on, to say the least.”

But you don’t just walk through the door at a promotion like AEW, which has emerged as a serious rival to the industry-dominant WWE in recent years by signing a series of eye-catching free agents and indie heroes, including CM Punk, Bryan Danielson and Ruby Soho, whose ring name and entrance music have been co-signed by Rancid guitarist Lars Frederiksen. Since Every Time I Die released Low Teens in 2016, Williams has devoted his time, and body, to wrestling alongside the other half of his team, the Blade, climbing the rungs on their way to regular TV time. It’s a punishing gig that, in reality, has a lot in common with life in a touring punk band.

“One takes you away from your family for 40 days, you live in a van,” he says. “The other takes you away from your family one or two days a week, but you’re gone, gone. I barely talk to my fiancée on the days that I work. I’m busy all day. It’s insane. Sometimes I’ll get weird about it and be like, ‘One of these has to go.’ And then I’ll think, ‘No way, man.’ I’m only 43 years old. I gotta do this until I can’t. Obviously, the wrestling thing is going to go before the music thing, because I’m 43 years old. It’s not if I’m going to have to retire, it’s when I’m going to have to retire.”

The knock-on effects of all this effort were felt by Williams’ co-guitarist and creative foil Jordan Buckley, who shouldered more writing on Radical than he perhaps would have in the past. “I was running in the red so hard when we were writing the record,” Williams admits. Buckley, though, was in a good spot to take on the challenge. “It was fine,” he says. “We had the time. It didn’t feel rushed. I was just sitting at home riffing. I gave myself this quota of one riff a day.

“This was, say, 2017, 2018. The idea at the time was to take two months off, and that was insane. We were like, ‘I guess we could do nothing for the first time in 20 years.’ I gave nothing a try, and that worked for about four days. I picked the guitar up. Andy was out doing his thing and it felt natural. I was in a productive, creative place. I wasn’t being asked to do anything I wasn’t capable of doing.” 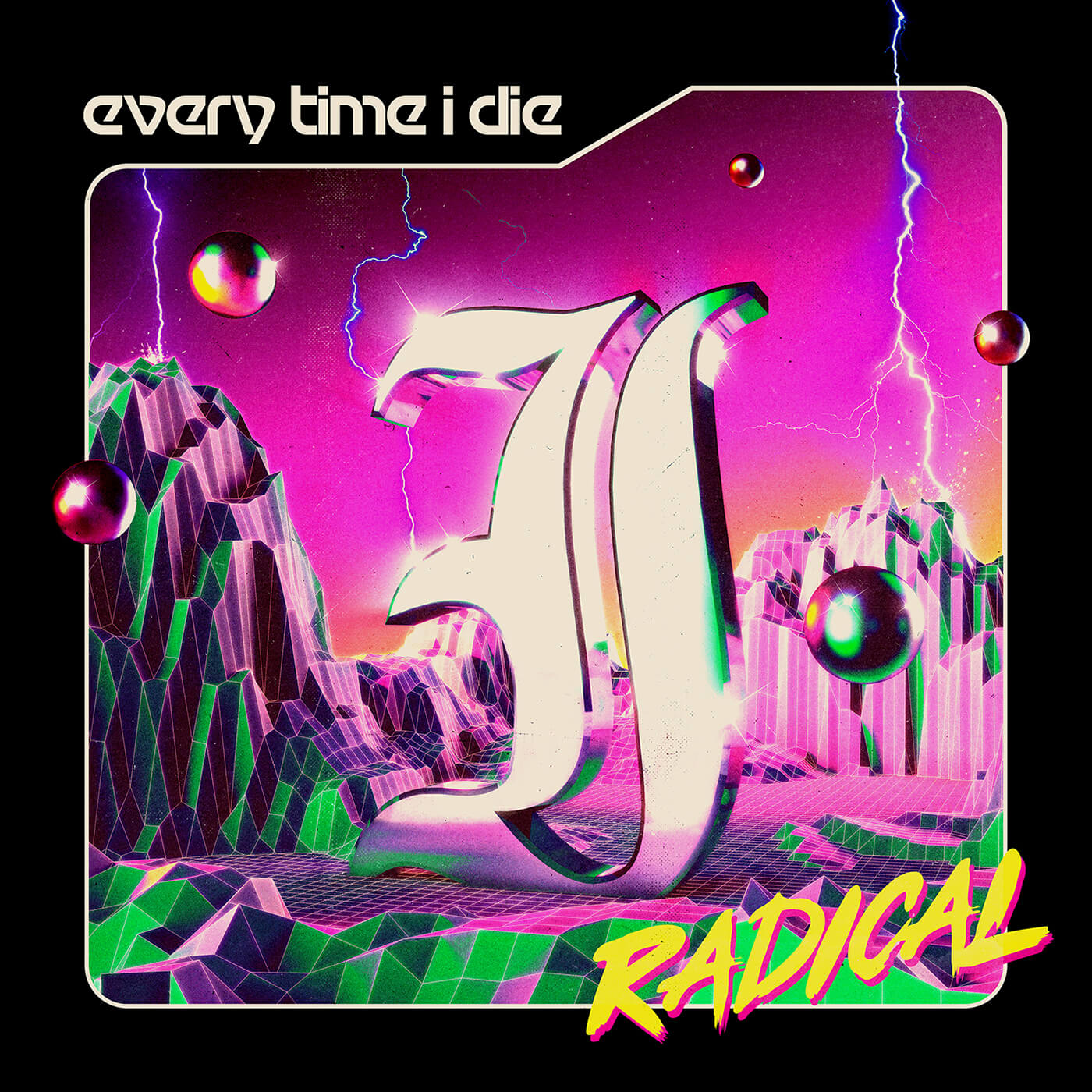 Radical is not a record by a band running on empty. It kicks like a mule, taking Every Time I Die’s patented brand of feral, time-signature-mauling madness and punching up the intensity so that each riff clatters into the listener, all knees and elbows. Recorded with returning producer Will Putney, its eye-bulging intensity isn’t the sort you always associate with a band – completed in this case by vocalist Keith Buckley, bassist Steve Micciche and drummer Clayton Holyoak – more than two decades deep.

“Me and Jordan and Keith made this assumption a long time ago, that the day it’s hard for us to write music is the day it’s done,” Williams says. “On this one, it was crazy, dude. Every time we showed up to practice either I had a song done or Jordan had a song done. We would leave for the night, come back the next day and be like, ‘Hey, check it out. I’ve got this thing.’ Every Time I Die is one of those bands that’s blessed because we know who we are. That’s a big thing.”

Something that continues to be thrilling about Buckley and Williams’ sound is that, no  matter how punchy the production, and it’s pretty punchy here, there is a coating of unbridled filth over everything. It’s all they way under their fingernails, caked on after years of seeking to blow up the blueprints of their favourite bands, renowned filth-merchants such as Converge, Botch and Coalesce. “I think that’s DNA, man,” Williams says.

Both players have signature guitars that were in the mix on Radical – Buckley’s ESP Eclipse, Williams’ Balageur Toros and Enigmas – alongside a Les Paul Custom. “I’ve been too scared to play a Les Paul live ever since I broke one like 20 years ago,” Buckley admits. “But Andy’s got one and I’m not as scared to play it in the studio.” The cornerstone of the Every Time I Die sound is a JCM800, with one running pretty much all the time, but beyond that there aren’t too many similarities between Buckley and Williams in terms of their approach to gear.

“I’ve always been the ‘if it ain’t broke don’t fix it’ guy,” Buckley says. “I’ve had a Marshall 800 and a TubeScreamer for over a decade. I like it, why change it? Andy bought me a 5150 because those are so reliably amazing. If Will tells me it’s going to sound good, that’s all I need to know. Andy is the guy who’ll try all 100 pedals and then decide.”

Williams isn’t about to disagree with that statement. “The thing that we’ve been doing is pairing the 800 with something a little more modern,” he adds. “My live setup is a Mesa Dual Rectifier with a 1977 JMP, a 50 watt. On the record I was using the Synergy SLO mod—which is insane, man—through a Seymour Duncan 700 power amp. And then we’d pair it with a Bogner Uberschall or a VHT Pittbull.”

The guitarists do have complementary styles, attacking Every Time I Die’s punishing riffs from different angles in order to flesh them out for maximum impact. There is a level of trust apparent in the way they discuss each other’s strengths, along with the sense that they really do get each other inside and out as musicians. “It’s very easy,” Buckley admits. “We know each other’s ideas are going to be awesome. Here Andy was really getting experimental on stuff. It reminded me of when we first started.

“Before we knew how to write riffs and songs, we were just like, ‘Let’s make it crazy, let’s make it confusing.’ We would have mosh parts that were phone numbers – six times, seven times, then four times because that’s the area code. That’s how we thought we had to write. This time around we were kind of doing that again. You add in what we know now and you get fun, cool ideas. Maybe it worked too well because we got 16 songs and we didn’t want to cut any of them.”

“Jordan’s a lot like his art, he’s very detail-oriented,” Williams observes. “He’s going to stress the turnarounds and the bridges. Me, I’m a quality over quantity guy. A lot of the groove comes from me, and a lot of the technical stuff comes from Jordan. He is a high performance, modern vehicle and I’m an old muscle car. That’s what makes us good together. I’m always wanting people to bob their heads. He wants their jaws to drop.”

Every Time I Die’s Radical is out now through Epitaph.