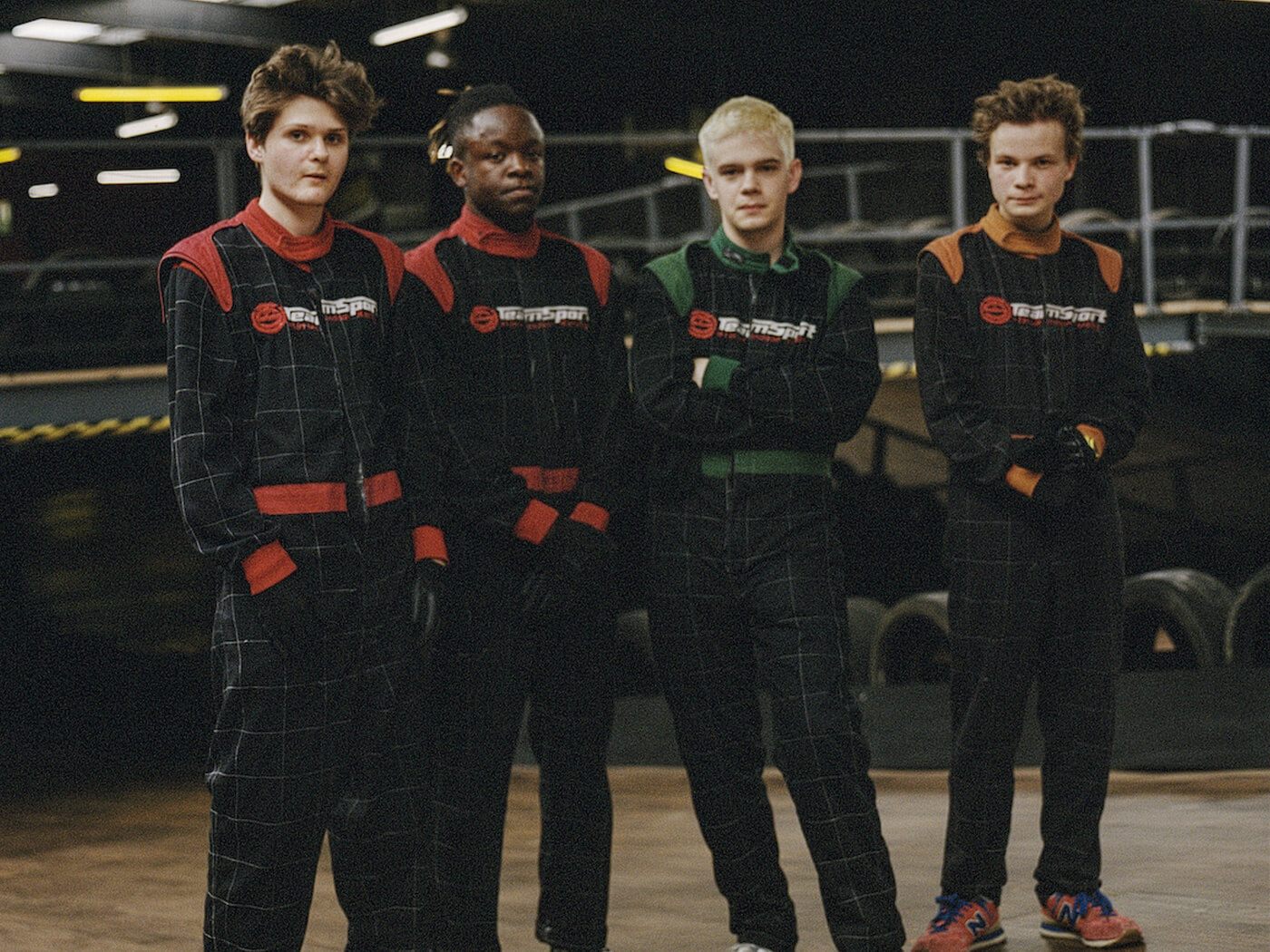 What does the future of guitar music hold? The answer might very well lie with London band Black Midi and their bracing, unpredictable approach to rock.

None of the group’s four members are of drinking age in the United States, and they’ve been an active unit for hardly two years. But they’ve already thrilled listeners across the globe with the sonic flag they’ve planted at the intersection of noise, post-punk, prog and krautrock. Freewheeling one moment and strapped into a monstrous groove the next, Black Midi have been known to set stages alight with incendiary performances. It’s no wonder they became the talk of the town thanks to live videos and gigs.

The energy of a Black Midi performance is impossible to capture in recording, vocalist/guitarist Geordie Greep tells Guitar.com. So, they don’t try. Last month, they released their debut album, Schlagenheim, which was produced by Dan Carey of indie label Speedy Wunderground. Its German title translates to something like “hitting home”, which is funny for a record that revels in zig-zagging between tempos, riffs and entire styles – but also an apt way to sum up the impact Black Midi have already made on the world of rock.

We talked to Greep about how Guitar Hero unlocked his love of guitar music, what musical trick used on Schlagenheim he might retire, and his trusty duct-taped Reverend axe.

How did you first get started on guitar?

When I was seven I got the game Guitar Hero on PlayStation for my birthday and slowly became addicted. As I made my way through the game, I grew more and more fond of the music itself. My dad had a vast CD collection and knew many of the songs in the game, so he would lend me albums he thought I’d find interesting.

I soon became more obsessed with this music than I ever was with the game, listened to as much as I could and decided to learn the guitar for real. For my eighth birthday I was given a ¾-size Squier electric Stratocaster.

You and guitarist Matt Kwasniewski-Kelvin were buskers for a brief stint. Did you take away anything from the experience into Black Midi?

Maybe not to expect too much from any one gig or audience. Some days, five hours of busking could earn us £200 and some days less than £20, even playing the same exact songs in the same exact spot.

When Black Midi first started, you said you had far more “rules and regulations” that eventually fell by the wayside. What were some of those rules, and why’d you feel you needed them in the first place?

At first we were much more conscious of the style of music we wanted to make and were careful not to let it fall into certain taboo genres. But as we played more and more, we stopped thinking about all that and did only what we found interesting in one way or another, sometimes without knowing why. This yielded better results.

Black Midi, as a creative entity, is all about reinvention. Are there any particular musical tricks used on Schlagenheim you feel might have already worn out their welcome?

Using the “magic” setting on the [EarthQuaker] Rainbow Machine to create a slowly ramping modulated delay may have.

So Schlagenheim and your live performances are meant to sound different, we hear. Why did you choose to do that? How has that worked out?

To completely capture the energy of live performance on record is an almost impossible task, so we decided to go in a different direction and make something with its own separate sound [as compared] to the live experience. This meant that [when recording] we were not hampered by considerations of how we would recreate every part live. We could just focus on making the album as detailed and nuanced as it could be.

How different is the gear you guys used for recording versus that of live sets?

On the record, we changed guitars and amplifiers on almost every song to make the band sound of each fit that one in particular. We also used quite a few strange pedals belonging to Dan [Carey] on overdubbed guitar parts, not to mention all the additional instruments.

What are your main guitar(s) and why do you like them?

Reverend Baritone guitar. It can handle baritone gauge strings and has excellent pickups but the scale length is not too long so it’s still quite easy to play compared to most baritones, especially live.

Can you tell us a little more about your duct-taped Reverend? What happened to it?

This is just used to keep the strap from falling off. At our first gig, the guitar strap kept losing hold when I would adjust pedal settings on the floor and I had no strap locks at hand, so I went to a nearby store and bought some duct tape to keep it in place just for the night. It worked quite well and has done ever since, so I’ve never felt the need to upgrade to the popular Grolsch bottle washers or even strap locks themselves.

What kind of effects do you guys prefer? Has that changed over time?

Ones that have a lot of features in a small box and respond to your playing. Most of the sort that make a crazy sound but don’t give you any control from the guitar get boring quite quickly.

What do you look for in amps?

[The ability] to handle bass frequencies without taking away treble and vice versa. Clean, loud.

Schlagenheim is out now via Rough Trade Records. Black Midi are currently touring Europe and North America. More info on their Facebook page.