“The world is in a dire spot now, there’s no time to be quiet”: Bob Mould rediscovers his vitriol on Blue Hearts

The Hüsker Dü legend on Strats, rediscovering old gear, and how his experience as a gay man in Reagan’s America meant he wasn’t going to “sit quietly this time” in the face of 2020’s “dire times”.

“At 59 years of age, I did not think I would be yelling this loudly again in my lifetime,” Bob Mould says along the line from San Francisco, beneath a sky that’s been lit up in ominous orange for a couple of days by California wildfires. As the west coast burned, in a broadcast from the trenches of the climate crisis, the front page of the New York Times detailed Donald Trump’s deadly downplaying of the dangers posed by COVID-19. “These are pretty dire times, especially in America,” Mould continues. “Vitriol, I like that word better than catharsis for our purposes right now.”

“I was cognisant of my beginnings,” he says. “I decided to take myself back in emotional time to, say, the fall of 1983. That’s what the fall of 2019 was feeling like in political terms. My job was to think about who I was when I was 22 going on 23, who I was with, what I was doing, and what thoughts were on my mind. That was a conscious callback. I was trying to look at who I was to see if any of that still applied to the current state of the world, and the current state of my music.”

It’s safe to say it did. In rewinding to the early 80s, when Hüsker Dü were still a semi-feral hardcore band operating in the Twin Cities, Mould was struck by the parallels between the men occupying the Oval Office then and now. Announcing Blue Hearts, he wrote: “I’m not going to sit quietly this time and worry about alienating anyone.”

He picks up that thread with Ronald Reagan looming large as a key domino in the run that led to Trump. “In the 80s, being a young, gay man, certain of my sexual preference but not having a sexual identity so to speak, it was a pretty tough time,” he says. “LGBT communities, especially young, gay men, were frightened by their government telling them that they were going to die of AIDS, and they’re not going to do anything about it.

“Looking back, I was thinking about what I did to help and what I didn’t do to help my own advancement as a gay man, maybe waiting a little longer than I should have to come out. It’s stuff like that. It’s not so much about regrets, but laments, and in hindsight thinking, ‘With the world being in a dire spot now, there’s no time to be quiet having gone through that once before.’”

American Crisis is a holdover from Mould’s writing for 2019’s Sunshine Rock, a peppy guitar-pop album that took a markedly different approach. Back then, Mould saw the song as too forthright, too angry, for the LP’s more happy-go-lucky palette. Now, he says it “seems fucking quaint.” 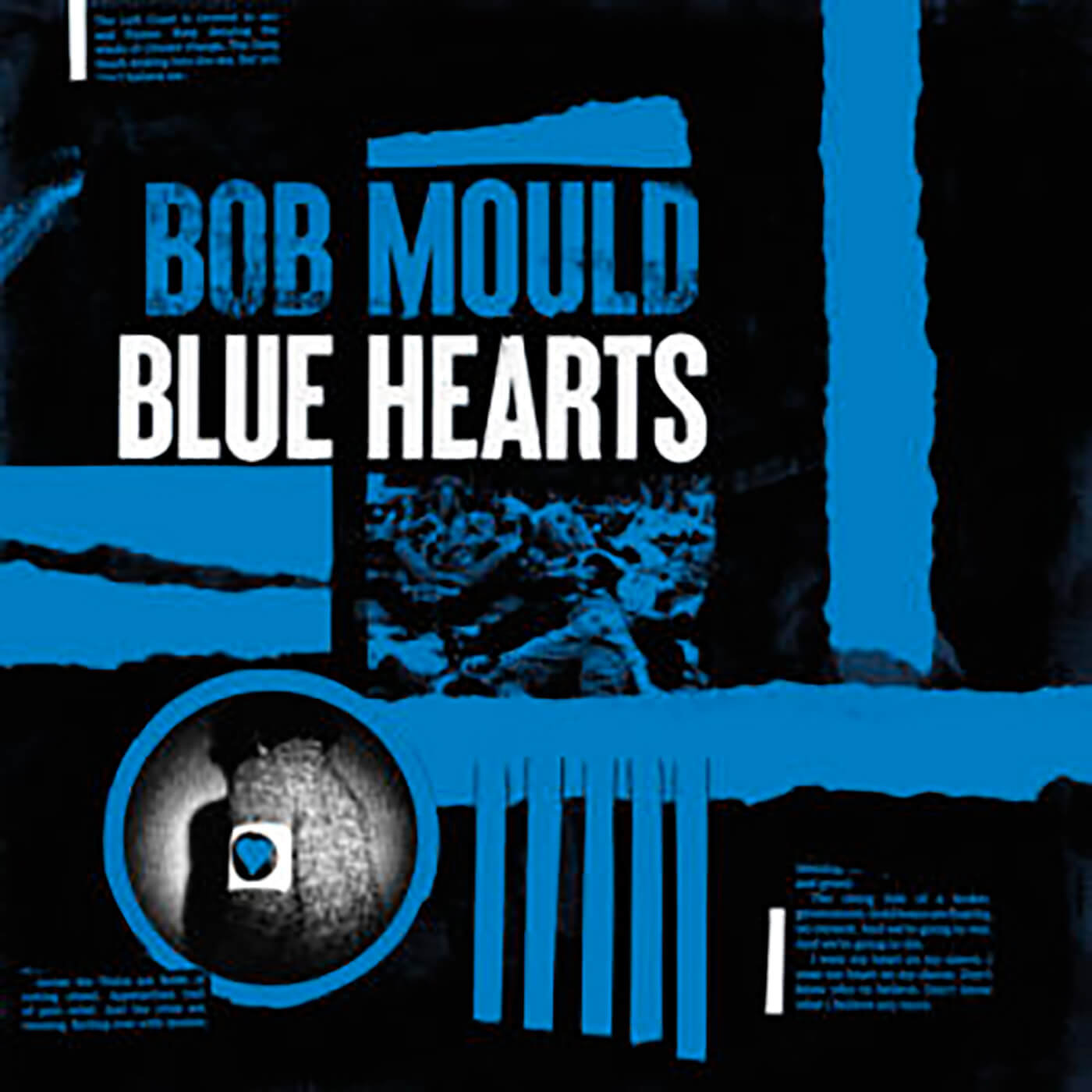 Having returned to the US following four years in Berlin, he has become reacquainted with 24-hour news and spent time marvelling at the depth of division found at each level of society. He devoted a large chunk of last year to being on the road, touring his solo guitar show, and the songs kept coming as he observed Trump’s America while settling into a mode of performance that he describes as “stand and deliver.”

“I’m having to carry all of the parts by myself, and that leads me to that more economical style,” he continues. “I think the key for this record was test-driving these songs in that setting and then going right into the studio without giving a lot of time to question it. That’s a particular methodology that I haven’t used since I guess 1991, when I spent a year on the road test-driving what became Copper Blue and Beaster, the Sugar records.

“Prior to that, with Hüsker Dü, we were known for always being an album ahead of ourselves on the road. It’s that idea of testing new material against known material, and if it holds up in the live setting you know you’ve got good songs. If you play a new song next to a hit and it doesn’t go over, you think, ‘Well, it didn’t really measure up.’”

Blue Hearts measures up. It blends the slashing punk purpose of Fireball with the artful, muscular jangle of Everyth!ng To You, balancing the competing sides of Mould’s creative personality in the process. It was recorded at Steve Albini’s Electrical Audio studio in Chicago, with Mould producing and his long-time rhythm section of drummer Jon Wurster and bassist Jason Narducy back in the saddle. With his knotty riffage reverberating loud and fuzzy, it calls on four decades of knowledge in how to get the best out of a power trio.

“It’s about trying to keep the parts as simple as possible, always being mindful of melody, and a record like this is built for the stage,” he says. “There aren’t a lot of singular solos that hang out there, sounding sparse in a three-piece setting. It’s those bigger, denser chord structures that are very easy to play without looking, which is always good if you’re intending to play them live.”

Mould has played Stratocasters since 1988, having famously picked a 1987 American Standard off the wall at a store in Forest Lake, Minnesota in the build-up to crafting his classic solo bow Workbook. That guitar, in Lake Placid Blue, has since retired, joining the Ibanez Flying Vs he played in Hüsker Dü on the sidelines. “Since I was coming off the road all I had with me was my grey Strat, which I think is an ’88,” Mould says. “I had someone ship out my green Strat, which might have had a hotter pickup. I have six of those that are more or less identical. Some are C necks, some are U necks.

“The ergonomics of a Strat suit me better than a V. Ultimately, that’s an awkward guitar. You can put it on your thigh and play it high in the air, I suppose. Other than that rock move, it’s a little unwieldy. The maple necks on the Strats felt so different to me versus the rosewood on the Vs in ’88, how you bend, how you dig in, the resistance, fret size. I like having the flexibility of getting that traditional Strat sound for cleaner stuff. You’d be hard pressed to get that out of a V.”

With his touring pedalboard employed – a custom Mould-branded Tym Guitars Distortion+, a TC Flashback, an Electro-Harmonix Freeze and a Wampler Ego Compressor – Mould set about documenting different amp configurations through a combination of close mics and room mics to capture depth. He also mirrored the record’s look in the rearview by utilising gear that underpinned his sound between the early days of Hüsker Dü and their unimpeachable third album New Day Rising.

“This one’s mostly a Blackstar Artisan 100 through a Blackstar slant 4×12,” he says. “The second main config was a Matchless DC-30 212 combo, and then the amp that I used back in the 80s that I haven’t brought into the studio in forever: a reissue of a ’65 silverface Fender Deluxe. That adds a lot of the constant, upper-mid saturation that you’re hearing on the record. The guitars are voiced a little higher in the frequency spectrum this time, which opens up different spaces and gives more room for my vocals, and the snare drum, and the mid-register of the bass. It shifted everything a little brighter.”

Interestingly, almost immediately after Blue Hearts hit the shelves, Mould took another dip into the past with a monster box set called Distortion, which collects his output between 1989 and 2019, both solo and with Sugar. Framing such an undertaking by making it follow in the wake of new material that chiefly recalls his work with Hüsker Dü is peak Mould – he’s been keeping us guessing for 40 years.

“I’ve always tried to look forward,” he says. “After Hüsker Dü, Workbook was a good example of changing my language pretty wholesale. Sugar was a little bit of a nod to the past, but more in a power-pop sense. The aughts brought a lot of electronica, and then getting back towards guitars. Those records were more about craftsmanship in the studio. With Jason and Jon locked in on the recent records, that was drawing upon all the things I’ve done before. With this record, it’s funny that it sounds like music I made before the box set. It’s this weird thing where we’ve got 30 years of recent history to consider and then an entirely new album that sounds even older.”

Blue Hearts and Distortion are out now.