The Brooklyn quintet return with songs about adultery via sexting, the perils of modern consumption and one set inside a bodega itself. 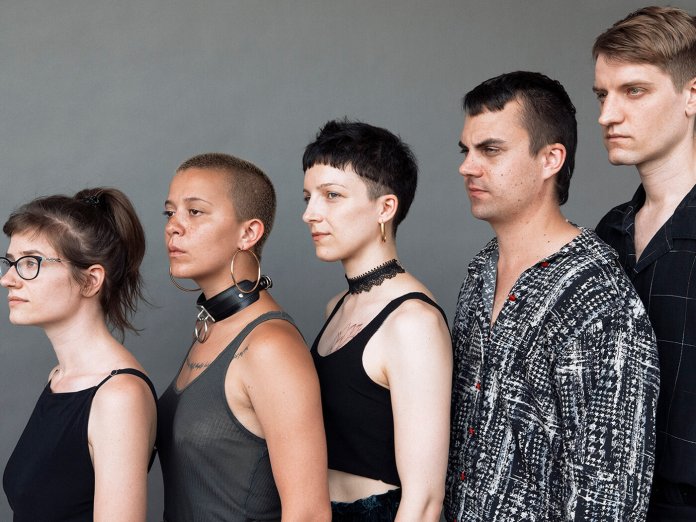 Brooklyn’s Bodega are a whip-smart, playful yet deadpan group of musicians and creatives. The collective pushes the boundaries of modern rock music with their repertoire of thought-provoking art-infused music, driven by their own brand of pretension and razor-sharp wit. Formed in 2016 following the demise of previous outing Bodega Bay, the art-rock outfit now lays claim to two full length albums and an extended EP.

Playing on the themes of adultery via sexting, the perils of modern consumption and also offering a song set inside a bodega, Madison Velding-VanDam talks us through his favourite guitar parts on the EP, Shiny New Model, alongside her introduction to rock music and her work on Bodega’s previous releases.

“I started in rock music as an electric bass player with the classic-rock legend Mike Lutz, who co wrote Smokin’ In The Boyʼs Room, as a teacher. I was lucky to learn about music from the perspective of a rock musician, instead of someone who is classically trained, because he encouraged me to develop my own style. By the end of high school, I was hungry to write and sing my own songs, so I switched to guitar, a more useful instrument for singing over.

“Iʼm no loyalist to guitar though, and while living in Berlin I put the guitar away and pivoted to working with synthesisers and sequencers and focusing on production. For that reason, Bodega has been a beautiful experience, bringing me back to the nostalgia of being a teenager rocking out. This time around, my tastes are much broader and this has helped me reimagine my role. Now I draw as much inspiration from art and other mediums as I do music; I improvise meandering atonal solos like Miroʼs protozoan monochromatic shapes, or channel my fears and id like Francis Bacon with haunting feedback.

“I’ve only recently started to hone my rig, but I will say that how I play my guitar has stayed far more important than the colours I get from my amp and effects. I use only Reverend guitars, primarily the discontinued Warhawk II HB, because it’s the most versatile, full-sounding guitar I’ve ever played and the humbuckers allow me to create sustaining feedback.

“For pedals, the MXR Dyna Comp adds sustain and uniformity to my staccato playing – I consider this pedal indispensable – and the TC Electronic Echobrain Analog Delays – they’re cheaply produced and readily break, so I have backups – because their huge delay knobs allow me to automate them with my feet live. I use a Fender Hot Rod DeVille because of how loud I can get this sucker before it breaks up, but I don’t love all Fender amps – for example, I think the Twin Reverbs are so bright that it’s painful. My clean sound and clarity is a key contrast to the way Bodega Ben uses his Vox for a nice smeared saturation on his chord arpeggios.”

Truth is not punishment

“After a year of touring and countless live improvisations on this song’s ever-expanding bridge section, we decided to re-record Truth Is Not Punishment for our new mini-album Shiny New Model to include this off-the-cuff energy. The new versions, both the extended and ‘radio edit’, are solid captured moments that represent directions we have taken it live. I wish I could say that we’ve documented our absolute best performance and my absolutely definitive solo and transcendent noodling, but I think the ephemeral satisfaction of playing and experiencing this track live cannot be replicated.

“We’re still green when it comes to improvisation and the improvisational elements of this song happen over a drone on D major. We’ve started to experiment with different modes and during a section of the jam, Heather drops out the major third from her bassline, Ben switches to an atonal harmonic arpeggio and I play primarily Locrian riffs, lingering uncomfortably long on the scales most dissonant notes, giving an almost scary turn to the track, until we reign it in for the final chorus.”

“We recorded a version of this song for Endless Scroll, but I will admit I was not a fan. At the time, it felt far too summery and saccharine for our otherwise relentless debut. I staged a bit of a coup to get it off the first record… With that said, I think it’s great that it’s the lead single for our second release. The song’s relaxed feel and vocal attitude is us letting ourselves go after touring for a year living the taut minimalism of Endless Scroll. The verse guitar part has Ben playing a savvy reinterpretation of Radioheadʼs Airbag chords and my lead riff is an accidental homage to Snow Patrol’s Chasing Cars!

“Bodega Ben has the great strength of arriving to the band with a fully written song concept that includes lyrics, melody, and chords. Our band flourishes when we help morph these – what could be folk songs – into a quintet of individualistic expression. Ben, in spite of his big persona, is a gentle soul and sometimes, early versions can feel a bit like Paul McCartney going ham.

“Jack In Titanic was one of those instances where he brought us a cheeky, but also movingly earnest, love song sung over open chords, but it was missing an unresolved element. It was early days in the band, and although I was certain we could push the song in this direction, I had to provide proof of concept on the spot at rehearsal. I quickly came up with the idea for this pedal-tone riff where the bass defines the chords and the guitar does a simple repetitive punk lead riff, akin to Joy Division’s Transmission. Ben would later add the big stadium-rock guitar hook that follows the chorus.”

Knife On The Platter

“This song is one where there is a marked distinction between our live and recorded approach. We envisioned this track living between the funky hip-hop in Name Escape, where Ben is primarily singing instead of playing guitar and the more melancholic chords of Jack In Titanic. To really push the beat, we leaned into the explosive Run-DMC/Beastie Boys-style snare sound. Heather’s bassline is the hook, so rather than double that, I tried droning chords that would push the mood in an unexpected direction.

“I ended up with this chime-y 11th chord that to my ear, connects with the mood of Jack In Titanic. Ben and I always say ‘self-plagiarism is style’. Another fun part of this one what is what we’ve dubbed the ‘lightning guitar’, which comes in after Nikki’s post-chorus vocals. This staccato riff is played with all downstrokes and, when played at the correct tempo, is exactly as fast as my hands can play!”

“My strongest memories of this song are very early on in the band when I was still on bass. I was broke at the time, so I bought a $100 all-black metal-looking bass at Guitar Center that had the highest action of any instrument I’d ever played. I’m a strong left-hand player, so I could make it work, but Ben’s live obsession at the time – and arguably even more so now – was repetition.

“One of our biggest fights came after we played Name Escape for 15 minutes and I left the show with my hand locked in a carpal-tunnel claw… I insisted that I switch to guitar. Ben was very reluctant – fair enough, as heʼd generally seen me playing different genres than Bodega was going for – but eventually agreed and we brought Heather Elle on bass.

“Austin Brown from Parquet Courts had offered to record us in a month between tours, so I was tasked with writing the second guitar parts very quickly. For better or worse, a lot of what I play live now, the erratic improvisation, feedback, and staccato interjections, came after we’d finished recording Endless Scroll. The guitar work on the album is in tasteful service of elevating the vocal, so I don’t dwell on this too hard. While we recorded demos in our tiny cement rehearsal space under blue LED light so Austin could get a sense of the album beforehand, I was improvising a bunch of riffs with Ben when I stumbled on the ascending run that is now one of the track’s big hooks. ‘That one!’ he said immediately. He’s got a knack for knowing the hook, so we went with it.”

Shiny New Model by Bodega is out now on What’s Your Rupture?

Noel Gallagher says of his songwriting: “I’m not as good as people think I am”