The London-bred duo went from playing to a crowd of 10, to collaborating with Jeff Beck, to finding their sweet spot between industrial rock, electronic pop and blues. 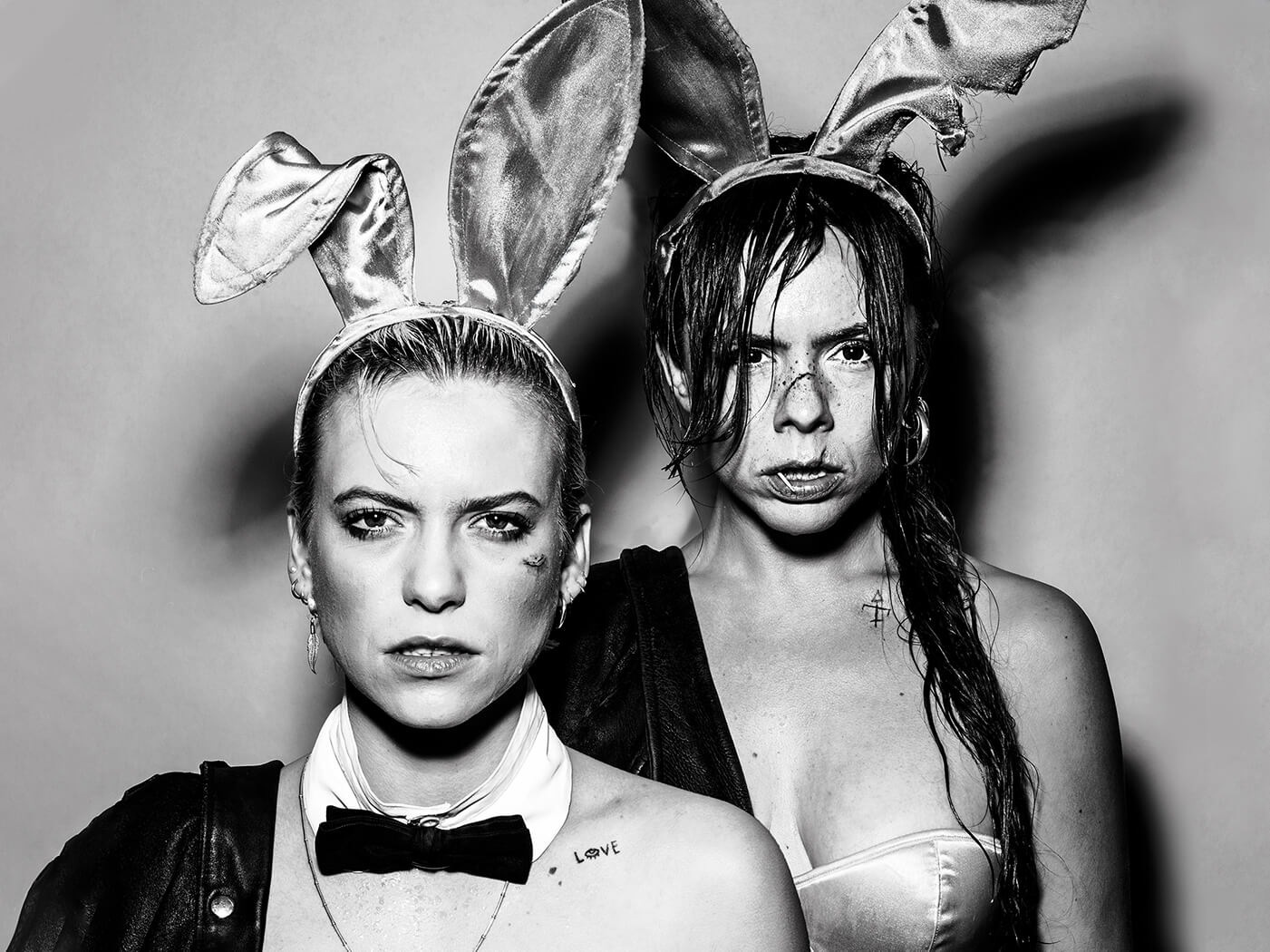 Bones UK are a band that could only have been formed in the lurid playground that is London’s Camden Town. Industrial rock, electronic pop and a booted-up punk’s rebellious spirit collide in the duo’s brash, unapologetic music – so it comes as a surprise that one of their first major projects was to co-write Jeff Beck’s album, Loud Hailer.

Vocalist/guitarist Rosie Bones and her six-string partner Carmen Vandenberg even went on tour with the blues-rock icon in 2016, just two years after the pair had met in a Camden bar. After touring with Beck for a spell, the duo swapped England for sunny Los Angeles and began putting the pieces together for an album of their own, produced by Filippo Cimatti. And if the slew of ferocious singles that dropped earlier this year is anything to go by, Bones UK’s self-titled debut will be a liberating, empowering affair, bound in leather and studs.

Ahead of the record’s release, we caught up with Vandenberg, a prodigious blues player who studied at London’s Academy Of Contemporary Music and, as a teen, sessioned for the likes of Kate Nash. She tells us more about the record, her love of Fender instruments and how she balances innovation with honouring her guitar heroes.

How have all of your previous experiences informed your approach to writing this record?

I started off playing in London with artists like Kate Nash and Dave Stewart, but it’s like two different worlds: writing your own music or being a session player. I’ve steered toward being more of a writer now, but I think it was great to play for other people and start to tour so young. I learnt a lot from watching and learning from other people.

I think this record and this band were worth the wait. Finding Rosie in my life, and Filippo, and making this album – the timing couldn’t have been better. It just feels like everything was a journey that had to happen in order to get to this.

Were you already living in L.A. when you started working with Jeff Beck, or still in England?

I met Jeff Beck about three and a half years ago at Roger Taylor’s birthday party. We played together a bit, and then he came to see a Bones show. He loved the band. We’d just started playing – I think there were 10 people in the audience – and he asked Rosie and I to help him write his next record. We were so honoured and surprised.

So we put Bones on hold for a year, wrote his record, and toured with him for a bit. Then at the tail end of that, we wanted to fully dedicate ourselves to Bones again, and instead of doing it in London, we wanted a bit of vitamin D. So we decided to move to L.A. and start everything new here.

The new Bones UK album is pretty diverse. How important is it to you to implement traditional guitar solos and leads, as opposed to letting the song breathe in a different way?

We see each song as a different canvas, so you do what’s right for the canvas itself. As far as the solos go, there’s definitely a moment where I would want to do a Gilmour kind of solo. In Leach, I wanted to channel Santana. I can think of some of my favourite guitarists and do my version of that, and I work quite tightly with Filippo, who also plays guitar. We balance each other’s ideas and sometimes he comes up with some of the riff ideas. It’s a collaborative process, but there’s [times where] I want guitarists to listen and be like, “Oh, she was probably thinking of Gilmour at that moment.” It’s my little in-joke, I guess.

With all the sounds on the album, do you look at it like you do a story?

I hope that’s what we try to convey, but I just hope that people really enjoy it and have their own journey. I can’t really guess what goes through people’s minds. I hope they have fun, and press play again when it finishes. That’s all I can hope for.

I know you play a lot of Fender guitars, but have you discovered anything new while making this record that you’re especially excited about?

The sound that I have right now is my Telecaster, a ’53 reissue that I normally play, but Fender’s being so supportive of us. Billy Seigle from Fender has always taken care of us. He made me my custom Strat that I use. We have so much love for them, and we always go see them when we pass by Phoenix. But for my sound, I use Blackstar Amps, and they’re very good to us as well.

My pedalboard varies, but it’s very simple. I have an Electro-Harmonix POG, because a lot of my riffs are played in different octaves, so when I do that I need at least three octaves. And for fuzz pedals, I’ve got an Archer, delay – MXR are very good to me as well. And a bit of wah when you want some screechy sounds. I can’t remember what else. I’ve got an Echoplex that’s delightful for making weird sound effects, but I don’t actually use that while I play – I just get down on my knees and make really weird noises. But that’s about it.

When Bones perform live do you play straight to what you wrote for the album, or improvise and try something new?

As far as the solos go, you want to be free to change it up. Doing this job for the rest of my life would get a bit monotonous if I did the same thing every day. We have different versions of the songs – like our live versions will have extended solos – but we stick to what we rehearsed ’cause it’s a proper show, and we take it very seriously.

What do you like about having the ability to do a more structured show and then pick up a blues session or something totally different? Does it tap into different parts of your brain or personality?