“This is folk music”: Bonny Light Horseman on celebrating the classics

A year on from the release of Bonny Light Horseman’s stunning debut album, Josh Kaufman reflects on breathing new life into centuries-old folk songs, reducing Justin Vernon to tears and lending The National his guitars.

“We didn’t dwell on it too much,” says Josh Kaufman laughing at the urgency with which his band settled on the moniker Bonny Light Horseman two years ago. “It was the day before our first show and we had to decide on a name so it could be in the programme.” They had been invited by Justin Vernon and Aaron Dessner to play to 6,000 people at the Eaux Claires festival in Wisconsin. “We had no songs written,” continues Kaufman, a custom Radack Guitars short-scale Pontiac resting by his side. “We had nothing really, except the desire to collaborate.”

It might sound like an unnerving way to play your debut gig, but life since that first festival as unfurled with graceful serenity for Kaufman, Anaïs Mitchell and Eric D Johnson, the folk supergroup formed in the summer of 2018. A year later, via a Berlin arts hub in the labyrinthine former GDR broadcast headquarters and a snow-blanketed studio in upstate New York, they’d completed an arrestingly beautiful album that’s a modern retelling of 10 folk standards dating back hundreds of years.

With the trio’s guitar playing weaving enchantingly around two of the most stirring voices you could wish to hear, the record also features cameos from The National guitarist Dessner and Vernon, aka Bon Iver. To many critics’ ears, it was one of the finest albums released in 2020, and before Covid-19 intervened the band had completed celebratory runs down both US coasts and a lap of the UK. It’s been quite a start to life for Bonny Light Horseman, and centuries after these sacred odes were first conceived, Kaufman is happy to report “they are all still very much alive”.

Multi-instrumentalist and producer Josh Kaufman moved to Brooklyn in the early 2000s, collaborating with The National on their 2007 album Boxer. He’s also worked with The Hold Steady and Josh Ritter, played guitar on The War On Drugs’ A Deeper Understanding and with Hiss Golden Messenger; you’ll find him on Taylor Swift’s Folklore album and he’s toured with the Grateful Dead’s Bob Weir. Oh and he’s in another New York supergroup, Muzz, with Interpol’s Paul Banks and Matt Barrick of The Walkmen.

Two years ago, Kaufman began working on songs with Vermont singer-songwriter Mitchell, whose Hadestown musical became a Broadway hit that saw her named in Time magazine’s 100 Most Influential People Of 2020. Meanwhile, Mitchell had met Johnson, founder of Chicago folk-rock band Fruit Bats and guitarist with The Shins, on Twitter. The trio quickly gravitated towards the concept of reworking ancient British folk songs, teleporting these ancestral tales of faltering romance, war on the high seas and the elemental beauty of nature through the centuries and splicing them with passages of their own. They were inspired by Peter Kennedy, editor of the authoritative Folksongs Of Britain And Ireland, who wrote in 1975 that standardisation of these songs would spell their “death warrant”.

“This is folk music,” says Kaufman. “It doesn’t belong to anyone. I think there’s something beautiful about that. There are many, many versions of these songs, all mashed up, and it has more in common with jazz and hip-hop than old, dead music that’s not going anywhere. These songs are all still alive and by borrowing, stealing and moving them around you keep them alive.” 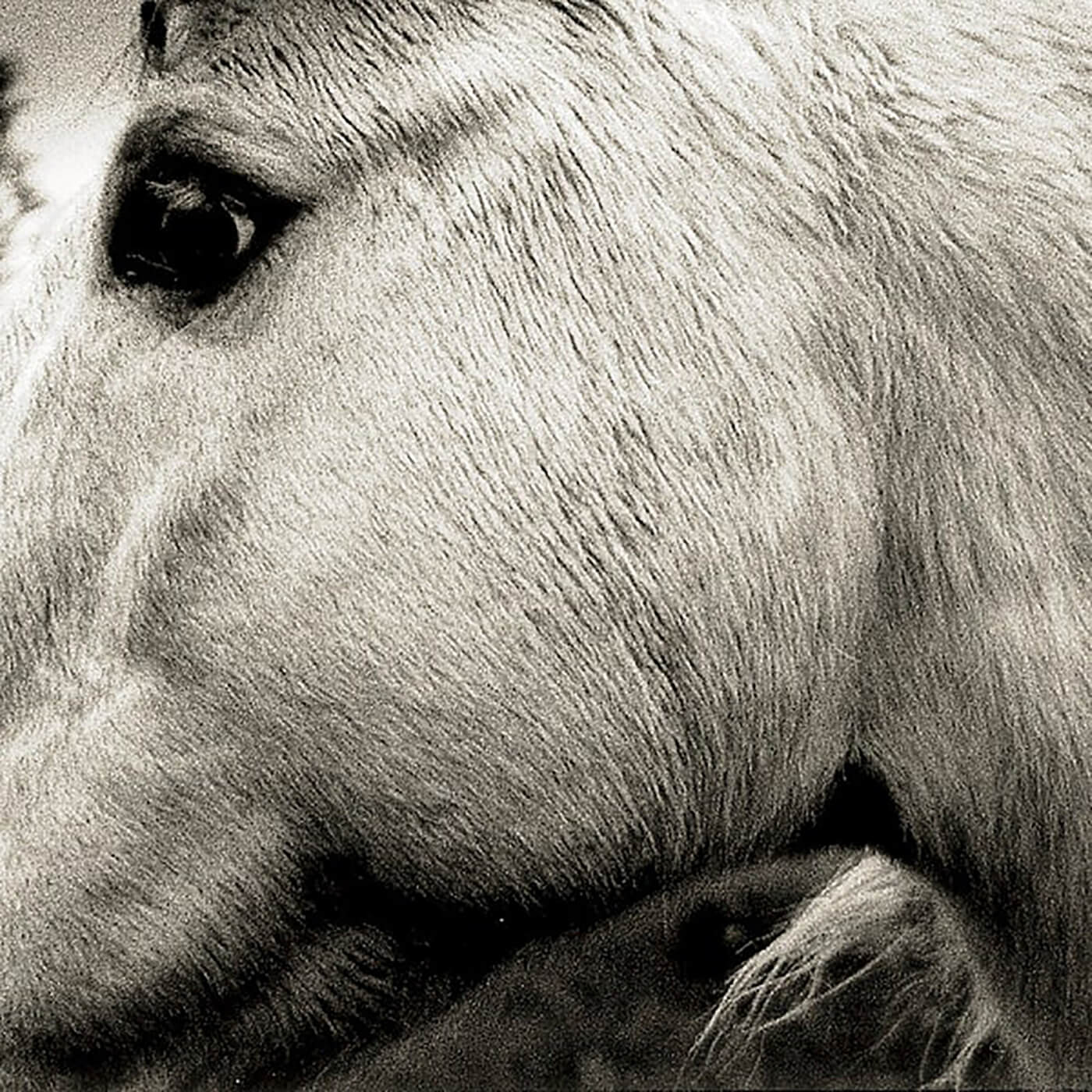 At the invitation of Dessner, the album was recorded during a sprawling collaborative residency at Berlin’s Funkhaus, where The National had orchestrated the electronic abstractions that pulse through their Sleep Well Beast album. With more than 100 artists allying on multiple projects, the collision between venerable storytelling and the brutalist post-modern setting was thrilling.

“It seemed like the Epcot Center of studios,” Kaufman recalls. “You would walk into one room and there’s two drummers facing off and someone screaming into a mic, and then in the next room there’s someone making hip-hop, this potpourri of everything happening. We were jetlagged, it was really hot and we were in this sort of dream state. I’m not sure how we walked away with a record.”

With engineer Bella Blasko capturing everything live, the connection between the three guitarists was immediate and alchemical. Decisions over who played what were made instinctively, as Mitchell’s fluttering alto and Johnson’s distinctive yearning timbre dovetailed. “We didn’t have to really work on that,” says Kaufman. “There was a natural fit. Anaïs and I, our picking patterns sort of interlock in this cool way. She leans on this side of the beat, I lean on that side of the beat, and it’s just the little engine that could.

“Anaïs sticks to her small-bodied steel string Martin, I’ll often play nylon strings, and we keep everything in open tuning, which gives it this suspended feeling. We play with our voicings, try to use the two guitars like they’re one piano and capture as much emotion as possible.”

The album’s eponymous opening track is a heartbreaking tale in open D set at the dawn of the 19th century. It sees the object of the protagonist’s affections condemned to a watery grave by Napoleon Bonaparte as Mitchell’s sorrowful cry is elevated by big, sonorous strums. Vernon, who Mitchell describes as the band’s “fairy godfather”, was invited to add his own vocal to the brew, but the band’s devastating delivery rendered him unable to sing.

“We got through the first chorus and Justin was just sobbing. He couldn’t sing it,” Kaufman recalls. “We were like, ‘Maybe we should try a different song’. He just said, ‘I can’t touch that’.”

Vernon instead takes the first verse of Appalachian spiritual Bright Morning Stars, recorded in Nils Frahm’s Saal 3 studio. Elsewhere, the accented interweaving of Kaufman and Mitchell’s playing on Johnson’s Deep In Love – captured in a single take – is heavenly. Mountain Rain calls on the ballad of John Henry, Blackwaterside is a reworking of Northern Irish folk standard Down By Blackwaterside, performed by Bert Jansch and Led Zeppelin, and Jane Jane revisits the gospel Children, Go Where I Send Thee. There are geographical shifts, too. Magpie’s Nest is relocated 3,000 miles from the Channel Islands to New Jersey, and Lowlands, smoky saxophone notes swirling lazily around Mitchell’s wistful visions of her true love taken by an angry ocean, is resituated to the Gulf Of Mexico.

“We had this idea that it would be cool to transport it to our side of the pond and set it in Mobile Bay,” says Kaufman a smile spreading across his bearded face. “We were really excited about this idea, and then we found people had been doing that for hundreds of years. We were late to the game… We played with the positioning and the language just a little bit. We wanted to retain that ancient poetry but not feel like we were dressing up in a costume.”

As they mined deeper into these centuries-old stories, the band realised how universal the tropes enshrined in their archaic verses are. “All of them,” says Kaufman emphatically. “There’s a lot of unrequited love, travelling, namechecking towns, people, desire, all part of the human experience, woven into these songs and it still pops so hard now.

“On The Roving, ‘I knew her love was changing by the roving of her eye’, to me that’s such a forever statement, something so universal that’s always going to resonate with people. It’s almost scary how vivid it is, it isolates that moment where you realise not everything is OK. Those observations are just part of our DNA as people.”

Lost in the dream

After two thirds of the album had been completed in a jetlagged haze in Germany, it was wrapped up at Dreamland Studios in Woodstock with some guitars of an appropriate vintage and an old silverface Fender Champ.

“There was Anais’ 1930s mahogany Martin 000,” recalls Kaufman. “I love playing it, and I want one, but it’s tough. You lust after this one, but they’re not all like that. You pick up another one and it’s totally different. There’s also an Antonio Aparicio nylon-string I really like that was made in Barcelona. It has a nice, dark, deep tone, then there’s my old Guild D4 for the strummy stuff. The electric guitars are mostly my early-70s Guild S-90 and a 1950s Silvertone U1 with the single pickup, it sounds so pretty.”

While Vernon was unable to gather himself to appear on the title track, Dessner does, playing a vintage Stella in Nashville tuning. “Aaron is such a beautifully texturally minded guitar player,” says Kaufman. “He always finds a little spot that’s missing some light and he just shines it in that perfect little spot. He’s a gifted guy and he finds these tiny moments. Sometimes I solo an Aaron track and it’s just two little notes up in the corner of something, but you take it away and the whole thing falls to the side. It just hangs on those two notes he’s playing.”

Dessner and Vernon’s familial support for Bonny Light Horseman typifies a collaborative atmosphere taking root in American alternative music, often centred around Eaux Claires or Dessner’s Long Pond studio. It’s audible on The National’s last two albums and Bon Iver’s I,I. Then there are those wildly exploratory Funkhaus sessions, the vast Grateful Dead tribute boxset Kaufman joined his National friends on, and the two Taylor Swift albums Dessner helmed. What they all have in common is that genre is immaterial, the guitar is used in new and interesting ways and individual egos are left at the door.

“I definitely feel it’s something special developing and a community-minded approach to music, almost like a food co-op,” says Kaufman. He likens it to the fertile creative environment he encountered upon first arriving in Brooklyn, lending Dessner his Guild Starfire and a blonde Telecaster to record Boxer.

“I’ve known Aaron and The National guys for a long time and they’ve always been this way, collaborating and expanding the fabric of what they’re doing. It’s something they’ve been cultivating for a really long time. It’s moving in that collaborative direction more and more, just opening things up, which is great.”

Inevitably, boundless collaboration means full diaries. After our interview, Kaufman is off to play a live-stream gig with Muzz at Reade’s Theatre in Kingston, NY. He’s had a busy year of production work, too. Will he, Johnson and Mitchell have time to make Bonny Light Horseman a full-time band?

“We’re working on new songs now, making another record,” he answers. “It’s hard to say  with the world the way it is, but I think when music comes back we’ll get busy again. The intention was always to tour, make records and have it be a fully functioning band, not just a side project.”

And will they turn again to the hallowed standards in Kennedy’s Folksongs Of Britain And Ireland for inspiration? “I think we’ll evolve and change, but there is a nice sort of feeling to making music that you can’t claim ownership over,” he reflects. “It does something to the collaboration when everybody’s playing with ideas that have been around a long time and moving them around. When it’s not necessarily your heart poem that you really went deep on, there’s something cool about it not belonging to you. It’s folk music, it’s cool to remind yourself – this music isn’t mine, it’s for everyone.”