The bassist pulled in everyone from Guthrie Govan and Joe Satriani to Mike Dawes and John Petrucci to help him create Scenes From The Flood. 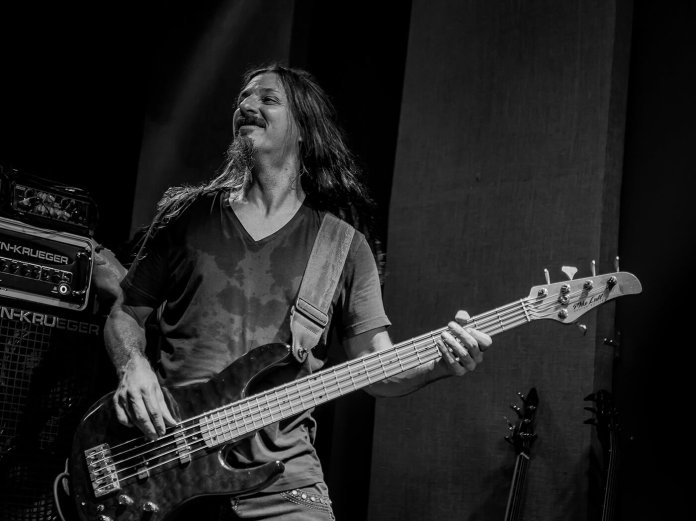 With some of the most astonishing guitar talent on the planet brought in to work on the record, we can’t help but wonder how he did it. Thankfully, the man himself was happy to explain how and why each artist got involved, taking each track and cameo in turn.

“When I listened back to the finished demo, I immediately realised that I’d be committing a crime against the song if I didn’t ask Joe Satriani to do it. The chord changes, melody, and song form (A/B/A/B/bridge/solo/coda) were all screaming for his signature artistry. But more than anything, this song is the most optimistic of the entire album – it’s where the story begins – and no other guitarist on earth soundtracks that kind of ‘upbeat journey’ vibe better than Joe Satriani.

“To me, the thing that’s so amazing about Joe’s playing is his phrasing. It’s so loose and fluid, the way he lays back on some parts of his melodic phrasing and then suddenly pushes back onto the beat again. He does the same thing in his soloing, the push and pull. There’s so much soul in it, and I think that’s one of the reasons why he’s so broadly popular – there’s an emotional payload packed inside that soulful phrasing that connects to folks both inside and outside the instrumental-guitar-music universe.”

“There are so many sides to Mike Keneally’s genius and one of them is the ability to quickly digest complex riffs and forms and play them with ballsy rock confidence, like an AC/DC tune. This extreme-metal song’s intro and outro are incredibly tricky and he just ate it up like it was nothing. Also, he doesn’t sound like a metal guitarist, which I really dug. He sounds rough and raw playing stuff like this. It felt dangerous, and right for the song.”

Always Worth It – Griff Peters

“Griff Peters is a veteran of my previous two solo albums and I always gave him the most emotionally challenging tunes, because he goes deep with his playing. This is a song about an emotional world coming apart, which I told him before he cut it. His response was to take a simple melody line – one of the main themes of the entire album – and send me back 30 tracks of guitar, a huge arrangement that contained multitudes of rich harmonic and tonal layering that only he would do.”

“I had a jangly demo of this song that I played on an ESP electric baritone tuned to a Bdom7 chord. I got the idea out, but it was barely there and the whole time, I was thinking: ‘Great, it’s a song, now it needs a real acoustic player to make it sound beautiful on acoustic baritone.’ And then I saw Mike Dawes’ videos online, and heard how beautiful his recorded acoustic tone was and how effortless his mastery came off and I immediately thought, ‘That’s the guy.’ Also, his breakdown on The Storm is one of the most heartbreaking gorgeous performances I’ve ever heard.”

“I was making the demo of this one and wanted a real guitar solo on it, so I could hear it fully realised before committing to it. I was hearing an Allan Holdsworth/Fredrik Thordendal half-diminished thing in my head and no way could I pull that off on guitar. I knew from seeing Jamie Kime play with Zappa Plays Zappa that he did his own version of that angular fluid vibe – and he lived locally. So I called him, he came over to my place and we cut that solo direct out of the back of his Friedman head in less than an hour. Sure enough, we kept it for the record.”

“This was always going to be Janet Feder’s showpiece. I’ve long been an admirer of her work and I knew her specialty – preparing her acoustic baritone with split rings and roach clips and horsehairs and other small objects to alter the way the guitar’s tones and overtones resonate and vibrate – so my goal was to create a harmonic and sonic environment where she felt comfortable and free to do her unique thing.

“She took this ambient, moody piece that closes the first half of the album and adorned it with a flamenco approach on her prepared guitar, a hypnotic repeating melody on a fretless guitar, and other ‘mystery’ sonic elements to create something unlike anything I’ve ever recorded.”

“Rick Musallam is extremely versatile and does all the right things right, like a proper studio hired gun. But one of the coolest parts of his artistry is when he’s set free in an ethereal sonic landscape. He employed an EBow to create a world of sustaining, singing tracks in the ‘broken circus’ bridge of this ballad.

“Then, for the song’s heavy repeating tag, he added layer after layer of tape echo madness and verb/delay texture until, by the end, it sounds like it’s going to collapse upon itself. And I wasn’t even there when he did it. He just tracked it all and said: ‘Here, use what you want.’ I used almost all of it.”

“Nili Brosh had not only the right modern tone and technical ability to pull off the most difficult melodic guitar line of the entire album, but she also had the right cultural background. Even though this is an Indian-based vibe, there’s also something vaguely Middle Eastern about it. Nili’s Israeli heritage authentically spoke to that in the way she played both the main melody and the clean tremolo picking behind the sitar solo in the song’s extended introduction. She really brought it on this song.

“And for the solo, it just had to be John Petrucci. This is the 16th track of an 18-track album, and it’s the climax of the story, in many ways. The solo needed an authority and majesty that very few players in the world possess. John Petrucci is one of them. And really, this song, in all of its progressive epic glory, was tailor-made for Petrucci to solo over.

“I’m not sure I’ve ever heard another modern rock guitarist holistically unify their tone and technique into a defined artistry as successfully as John Petrucci. When you hear him launch into something, it’s got such personality and authority, just from the first held note.
“And then when he cranks up the velocity, somehow all of the richness and buttery goodness that you usually only hear in a single sustained note is still present in every note of a fast flurry of 16ths or 32nds. There’s a part in his solo on World Class where he goes way down low and suddenly speeds up and that’s such a hard thing to keep clearly defined with a solo/lead tone. And yet, in his hands, every note comes out sparkling. It’s magic.”

“Everyone knows – and none better than me, thanks to my time in The Aristocrats – that Guthrie Govan is one of the best guitarists alive today. Technically and improvisationally, his abilities are limitless. But it was playing Flatlands and Through The Flower with him live – as well as hearing his melancholia shine beautifully on his solo tunes Eric and Hangover – that made me realise it had to be GG on this tune, a searing guitar ballad that essentially ends the album.

“One thing that not everyone appreciates about Guthrie is his attention to detail. We scrutinised every single note of the melody for tone, bending, vibe, squeal, everything. We’re both a bit obsessive about stuff like that. Then, of course, hearing Guthrie solo on a 6/8 ballad to take home an 88-minute double-concept album is one of those things you just have to hear – several times – to fully appreciate.”

Scenes From The Flood by Bryan Beller is out now on Onion Boy Records.

A brief history of Gibson