“If I designed a metal guitar, this would be it”: Bring Me The Horizon’s Lee Malia on his new Jackson, his old Epiphone, and the band’s recent headline shows

Fresh from headlining Reading and Leeds, Lee Malia tells us about his new Jackson, being a gateway band, and never settling for less. 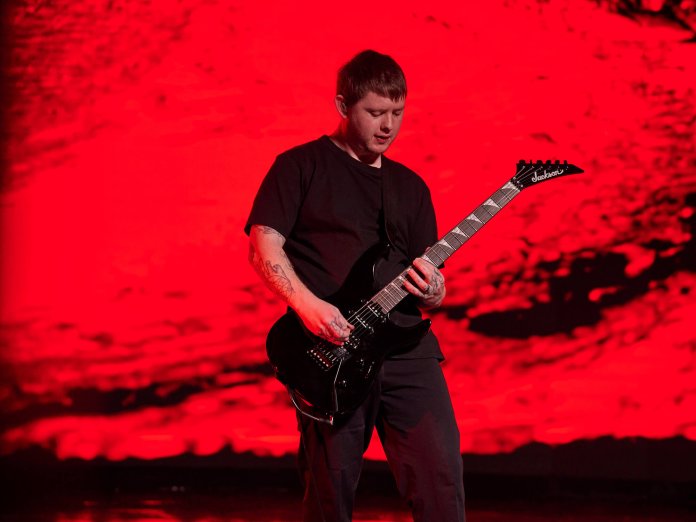 Bring Me The Horizon aren’t that band anymore. After bursting out of the underground in the mid-2000s as the ugly ducklings of deathcore, they spent the years that followed growing exponentially in maturity and skill, eventually morphing into arena-conquering, mainstream-baiting heavyweights (nothing says “fuck the haters” like bringing unclean vocals to the BRIT Awards, eh?). However, as far as their six-strings are concerned, they’re just coming full circle.

The first time the Sheffield quintet toured Europe, in support of Killswitch Engage in 2007, Lee Malia was playing Pray For Plagues on a Jackson Warrior. Fifteen years on, he has a Jackson round his neck once again, having been selected as one of the faces for the launch of the brand’s new USA Soloist.

“If I designed a metal guitar, this would be it, even down to the pickup configuration, because I always like a single-coil in the neck,” Malia says over Zoom, the jagged black guitar sitting on a stand beside him. “You can tell it’s really well made. It’s got through-neck construction rather than being a bolt-on. There’s a massive difference – the quality is so much better. It’s pretty much exactly what I would have wanted as a custom guitar; it’s that classic metal-looking Jackson guitar. It sounds great, it plays great, and it’s just built really well.”

In the time between getting his first Jackson – bought for him for £500 (“back then, it was a lot of money”) – and his new USA Soloist, Lee developed an interest in Gibson, after being taken round their showroom and gifted a classic Les Paul. “If you get a classic Les Paul, they usually weigh a ton, and I’ve always liked that because I feel like when [the guitar] weighs a lot, it makes me play it harder,” he says. “It gives you a certain sound because the guitar doesn’t feel like it’s going to break. That’s why I always use heavy strings and a weighted guitar.”

At about the same time, Malia made a parallel discovery while on tour with Every Time I Die in the US: the Marshall JCM800. “[Jordan Buckley and Andy Williams] were both using Marshall 800s and they just sounded insane,” says Lee. “I was running two amps and I could never make them sound as beefy as theirs.” Lee still uses the Marshall 800 to this day, and keeps a stack of them on display next to his computer.

A while later, Epiphone approached Malia about becoming one of their signature artists – the thinking being that, for Bring Me The Horizon’s young fans, Epiphone would make for a more accessible entry point into the world of guitars than Gibson.

“The Epiphone thing was really cool, and it was a good thing to do,” says Lee. “I ended up doing three different body shapes with them, and I was with them for ages.” Eventually, though, after such a long partnership, he felt there wasn’t much more that he could do with the brand. After not picking up any new guitars for a while, he was looking for something new. So, Lee has pivoted back to the brand whose more standardly metal appearance he obsessed over growing up – and it’s here he plans to stay for the foreseeable.

Almost 20 years into their career, Bring Me The Horizon have reached far enough into the mainstream to perk up the ears of those less familiar with heavy guitar music, inviting them to explore rock and metal in more depth. For most, caveman riffs and death growls don’t make for love-at-first-listen stuff; it takes some getting used to. The further new fans dig into BMTH’s back catalogue, the heavier it gets. For newcomers, these records could be the first exposure that leads to more extreme listening habits.

“When I was younger, I got into Metallica and bands like that,” says Lee, “then Pantera, who were the stepping stone to bands like Cannibal Corpse and stuff like that, which is super-extreme. You can’t just jump straight into death metal. You have to have a bunch of other bands that lead you there.”

This is a point of pride for Bring Me The Horizon. “We all think that it’s cool because, when we were young, we all liked bands like Linkin Park and they were never the heaviest, but I know Oli [Sykes, vocalist] has said he got into heavier bands from hearing the screaming in Linkin Park’s music,” says Lee. “We’re in a cool position where we can go and play a mainstream pop festival or we can go and play Download and it’s not weird, because we’ve got this crossover.”

It’s this crossover that made BMTH the perfect fit to finally headline Reading and Leeds in August – an occasion that brought the bucket hats and glitter kids face to face with festivalgoers in black hoodies and band shirts. This sense of unification was one of several things that made their 80-minute sets so triumphant. The others? Cyborg cheerleaders, eerie sci-fi voiceovers that depicted the shows as an “experiment for the next gen”, and pyrotechnic wizardry that ranged from fireballs and flares to pink heart-shaped confetti.

The sets were some of the weekend’s most talked-about moments. At Reading, the band even brought out Ed Sheeran for an energetic reprise of their BRIT Awards performance of Bad Habits back in February. For long-time fans, the shows felt like a win for the whole rock scene – proof to those who cynically decried the death of rock music that their judgement was painfully wrong.

The prospect of topping the bill had been in the back of the band’s – and the general rock fan’s – mind for years, ever since their landmark sub-headline set in 2015 just weeks before the release of That’s The Spirit, the album that arguably solidified their place as British rock giants.

“It was pretty surreal,” Lee says of the headline shows. “For the last I-don’t-know-how-many years, we’ve been like, ‘I wonder if they’ll ever give us a chance to headline…’ and the offer’s never come in. So we jumped at the chance to do it. It was crazy. It felt like a lot of pressure but we put a lot into the production, and it felt like it came across a bit different to what else was going on. We could do a bit more because it was a one-off weekend, whereas when we do a full tour it costs a lot more.”

Reading and Leeds was Lee’s first opportunity to take his new Jackson for a spin, and it’ll likely come with him when BMTH head to the US for a six-week stint, starting this month. In the time between shows, they’ll use the small studio in the back of the tourbus to shape ideas – they have hundreds, apparently – into full songs. “We’ve been writing for ages, on and off,” says Lee. “But we’re going to spend every day [while on tour] trying to get something made. We need to knuckle down and figure out what we’re doing.”

Despite Lee’s arsenal being led by more of a metal guitar these days, the direction the band has in mind is more of the emo variety. “It’ll be in a similar vein to the past two singles [Die4U and Strangers],” he says. “There’s a hint of nostalgia, but done our way. It’s something we feel we can do quite well, rock tracks with all these emotional vocals – Oli’s really good at that.”

It’s no coincidence that when Bring Me The Horizon started leaning into this strength, people started paying attention. Even 12 years on from their release, songs like the tormented It Never Ends and the wounded Blessed With A Curse still feel devastatingly potent. The band’s legacy, though, doesn’t concern Lee.

“I kinda disconnect from how everyone sees the band,” he says. “As soon as we get back off tour, I’m back home walking the dog. You disconnect from the bigger picture a lot.
“The next EP has taken so long because we’re never happy with settling,” Lee concludes. “The main focus is pushing what we can do. That’s what got us into this position – headlining Reading and Leeds – in the first place.”