“I wanted to create an amp where if I was going to a blues gig, all I’d need is the amp”: Carmen Vandenberg

The Bones UK guitarist and one-time Jeff Beck collaborator tells us why the new limited-edition signature Blackstar CV30 is her perfect amp. 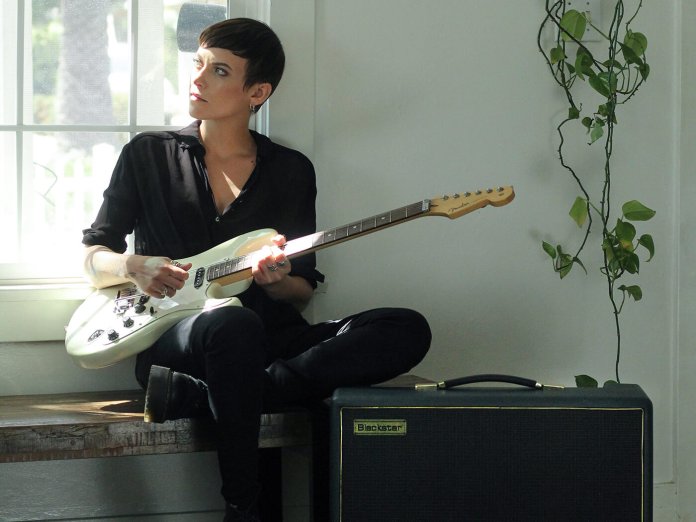 “When I got the call, I literally couldn’t believe it, it’s one of those things that’s so far-fetched I’ve never even dreamt about it,” Carmen Vandenberg tells us from her home in California, beaming with joy at the recollection of finding out Blackstar wanted to produce a signature amp with her.

The Bones UK guitarist, who graduated from the Academy Of Contemporary Music and co-wrote Jeff Beck’s Loud Hailer album with the guitar legend, is sitting alongside the product of 18 months’ development work with the UK manufacturer, the rather handsome-looking CV30 Carmen Vandenberg Signature Combo. Based on Blackstar’s Artist 30, it’s a 1×12, 30-watt valve amp combining the dynamics normally associated with an American 6L6 design and the chime and shimmer of a British Class A amp.

Packing in a 12-inch Celestion V-Type speaker, Blackstar’s patented Infinite Shape Feature and two distinctly voiced channels, the CV30 has been tweaked to the specifications of a stellar guitarist who’s a lifelong student of the blues. She’s now also the first female guitarist to own a signature amplifier.

“It’s incredible, it’s beyond an honour and I couldn’t even imagine what it would look and sound like at first. All the pieces started coming together throughout this year and a half we’ve been working on it.”

Blackstar have already been inundated with interest in the CV30, which is being produced in a limited-edition run of just 100 units to start. It represents the culmination of a journey to find the perfect live sound for Vandenberg, who spent part of her childhood in Italy with parents who were music obsessives. Her first instrument was the violin, but the guitar soon came calling.

“My dad had a VHS cassette of Woodstock and I saw Hendrix and picked up my violin and started trying to use it as a guitar,” she recalls with a smile. “My best friend at school, his dad is Dave Stewart from the Eurythmics. He had so many guitars and one day he put one in my hand and I thought ‘that’s it, this is what I want to do in life’. 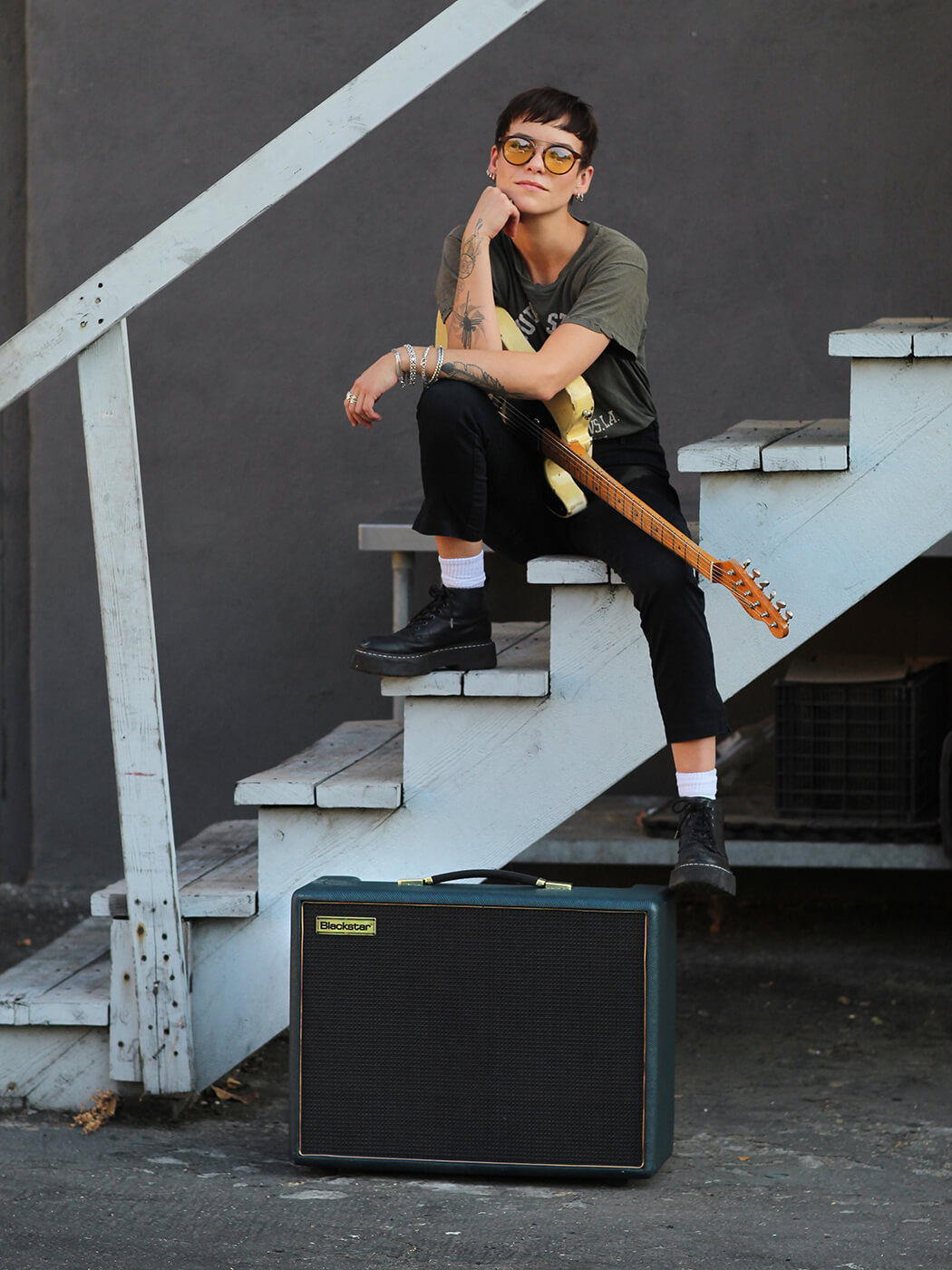 “I was drawn to blues… BB King, Freddie King, Albert King, all the kings! I fell in love with Albert Collins, Stevie Ray and all that stuff. The blues has been my love for a long time.”

That enduring appreciation of the genre informed Vandenberg’s initially fruitless search for the right amp, until she found Blackstar’s Artist 30 after touring with Beck to promote Loud Hailer in 2016. She agrees that many players underestimate the importance of the amplifier in their setup.

“A guitar is important because you have to feel connected to it in terms of your hands and the neck, but as you start to find your tone, the amp becomes equally important. I remember during the Jeff Beck tour not quite having a tone I was happy with. I blew up a bunch of Magnatones, and tried loads of different options. When I played the Artist 30, it was one of those moments – this fits perfectly, it gives me everything I need. I went to see Blackstar and tried all their amps, and for me it was the size, tone and weight of the Artist. It just clicked.”

The offer to produce a signature model came in February 2019, Vandenberg visiting the company’s Northamptonshire HQ six months later to start working on the spec. When she arrived, Blackstar’s engineers had already mocked up a prototype. “I was so surprised,” she recalls. “They’d really listened to my tone and what I liked about that amp, and made a more elaborate, more ‘me’-sounding version.”

Those tweaks involved giving the first channel more gain than the Artist 30 and pushing the mids, while the second channel has a more balanced tonal mix with significantly more gain than the Artist series. Elsewhere, the cabinet has been tuned to optimise the high-end content, the gain in the power amp has been dialled back and the PCB redrawn to reduce hum and buzz. Vandenberg’s go-to setting for the CV30 is Channel Two with just enough gain to push it to the edge of break-up, but she emphasises that her signature is a versatile amp and an ideal pedal platform.

“I use the second channel as my clean, with the gain at 3 or 4 o’clock,” she says. “It’s still clean but with a bit of a bite. I might not use the gain to its max, but I wanted whoever gets this amp to be able to use the clean channel for their clean and the second one as a proper drive. Say I was going to do a gig with the amp and no pedals, I could have a really cool drive sound if I crank it right up.

“It takes the pedals I use in Bones really well, but at the same time what I love about this amp is using it with nothing. I wanted to create an amp where if I was going to a blues gig, all I’d need is the amp. A clean channel, a channel with enough gain… you can do everything with just this amp.”

During development, the CV30 was put through its paces with Vandenberg’s well-stocked Bones pedalboard. It’s currently being rebuilt ahead of future live dates and sports a J Rockett Archer Ikon, an Electro-Harmonix POG, Pigtronix Octava, MXR Carbon Copy delay and a trio of Earthquaker Devices pedals – the Erupter fuzz, the Data Corrupter and the Organizer. Vandenberg also tested the amp with each of her three primary guitars – a ‘63 Tele replica, a Custom Shop Strat and a Deusenberg Julia, ensuring it thrives with a variety of pickups.

“In Bones, I play a lot with a Tele, so I need the bass to be quite present,” she says. “I loved trying it out with the Strat, as that’s what I’ll mainly use in the studio, and my Deusenberg because it’s got a whole different range of tones, but the main thing was for it to sound the way I need it to sound with Bones, and that’s my Tele. That’s the tone that defines the sound of Bones.” 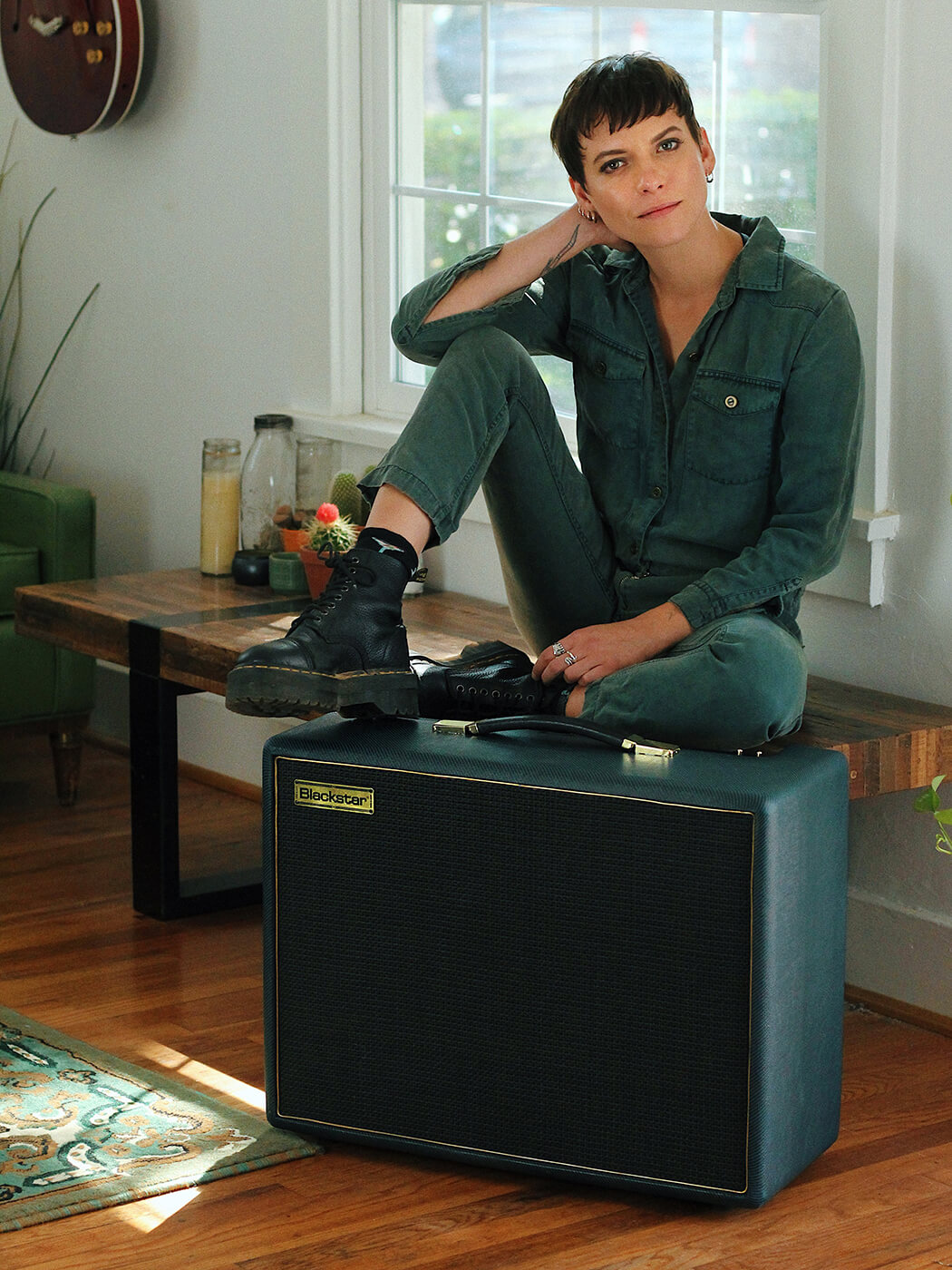 That Tele, spotted in No.Tom Guitar on London’s famous Denmark Street, could have been the one that got away for Vandenberg. “It’s a recreation of a ’63, rebuilt in ’84, and it’s just beautiful,” she says, turning a little misty eyed. “It was one of those magical moments, I picked it up and felt the air move around me. I couldn’t afford it at the time and for a whole week I’d wake up super-early and go to the store and play it so no-one could try it. Every time I had to go and do something, I’d be calling the shop, saying ‘has anybody got it yet? Please hide it until I get back’. I was a nervous wreck.”

The Strat, meanwhile, was specially built for Vandenberg by Fender’s Custom Shop before that tour with Beck.

“I grew up playing Fenders, they’re my first love. There’s something unique about a Tele, but there’s also something necessary and versatile about a Strat. Jeff asked Billy Siegle at Fender to contact me because I had to play a Strat on that tour. My hands are too small, I had to play with my thumb over the neck on a lot of the parts, and I couldn’t do it on thicker necks. Fender took the measurements from my Tele and made a custom Strat for me with a thinner neck, so that’s one of my other prized babies.”

When Vandenberg is able to get back on the road with Bones, she’ll be taking the Strat, Tele and Deusenberg, and whatever the size of the venue, the CV30 will be at the centre of her rig – as the Artist 30 was when the band supported Korn on a North American arena tour early in 2020.

“I had the Artist 30 and the HT Cub cab and head,” she reports. “Any time I’ve got space to travel with that stuff, I always have two amps. When we go back out with Bones, I’m going to take two CV30s and put slight EQ differences on each. One will be my main sound and the other will just beef it up. The bigger the stage, the more I want two amps.”

Having spent a large part of 2020 in lockdown unable to tour, Vandenberg has found the last year difficult. “There’s something about performing,” she says. “It’s not just what you give, it’s what you receive, I always call it my nutrition. Being able to entertain and see people’s smiles is what feeds my soul. This year, in the face of adversity, I just hope to get as much as we can done, and see if we can navigate doing shows in a safe way and keep our love of music and hope up.”

For now, though, she’s just happy to bask in the afterglow of having created her own signature amp. “It’s amazing,” she says. “I’m just so stoked that the Blackstar CV30 is here and this is really happening, that’s just crazy for me.”

For more information on the Blackstar CV30 visit blackstaramps.com.