“The best music on planet Earth are other people’s covers”: Cat Power on her new covers album and paying respect to artists past and present

As she releases her third covers album, Cat Power discusses the importance of tradition and reinterpreting classic songs.

Best known as Cat Power, Chan Marshall’s stage name has been attributed by many to the construction company Caterpillar and its trucker-cap slogan Cat Diesel Power. But that’s a myth. “Cat Power means people power,” she says, “as in jazz, where you say somebody is a cool cat.”

Marshall certainly is. With her latest album Covers, the Miami-based 50-year-old has delivered the capstone in a 20-year trio of covers albums. Power has been breaking hearts and crafting her own brand of candid anthemic folk-rock for more than 30 years. But she believes cover songs are the ultimate show of respect for songcraft.

Covers came early in Marshall’s career. Raised in Tennessee, North Carolina and Georgia, the heartland of gospel, Americana and blues, she moved to New York in 1992. Having done her stage apprenticeship and soaked in the grunge-folk-jazz sounds of the city, she recorded her debut album Dear Sir, in 1995. It features covers by Tom Waits and This Kind of Punishment.

“I’ve always had to ask to put [covers albums] out because normally when you sign a record label contract, you deliver originals, because that’s how they make more money off you,” says Marshall, as candidly as you’d expect of her. “But since the first one I did in 1999, I’ve said that I would always do this if I’m lucky enough to stay alive. From the standards to rock’n’roll, blues, country to jazz and folk, everybody always covered everybody’s songs. Traditionally it was very normal.”

Between The Covers Album, Jukebox and Marshall’s eight other previous studio albums, she has traversed all the aforementioned genres and more, her dusky, heartsick, sincere voice navigating listeners through the turmoil of broken spirits, self-discovery, and the marvel of womanhood. Though she’s strived to remain private, over the years Marshall has revealed her addictions and struggles with depression in frank interviews. She is a woman who feels everything. But like so many great artists, she has found a way to translate those dark moods and musings into music.

Covers, though, is not really dark. It’s melancholic and bittersweet but also poignant, cheeky, whimsical. Lana Del Rey’s A White Mustang is given a rockier, earthier twist and, without that breathy, hyper-feminine Del Rey touch, the song can be heard anew. Along with Iggy Pop’s Endless Sea and Nick Cave’s I Had a Dream, Joe, it was an impulsive choice.

Back in December 2019 in Los Angeles’ Mant Studios, along with guitarist Adeline Jasso, drummer Alianna Kalaba, and Erik Paparazzi on guitar, bass and keys, Power experimented with variations, recording everything and doing as few takes as possible to maintain the energy between improvisation, intention and pure musical magic.

“When the levels were correct and we were rolling, I just went to each member and just started composing. ‘Try this, try this’, ‘Eight bars’, ‘Try this 16 bars, then drop out and slow down’,” says Marshall. Once she had composed the part for each of her band, she’d head into the vocal booth. The first few songs to be recorded – Bob Seger’s Against the Wind, Endless Sea and I Had a Dream, Joe – were done in just one to two takes.

“I had no idea what I was gonna do,” says Marshall. “I believe that improvisational spirit is really, really a special ingredient in creating anything, you know, in cooking, writing a poem. So these [songs] are recorded in probably eight minutes, total.”

Elsewhere, you’ll hear The Pogues’ A Pair of Brown Eyes, which reminded Marshall of a beloved friend who passed from cancer, as well as Nico’s These Days, which Marshall peels back to reveal the beautiful bones of its writing.

During her early days in New York’s East Village, Marshall would commandeer the jukebox at old-school bar Mona’s and play The Replacements’ Here Comes a Regular on repeat. “I didn’t have a lot of money,” she says. “I’m going to get my alcohol. It costs a dollar. I’m going to put my other dollar in the jukebox and play that fucking song over and over.”

Now, having performed on stages and soaked in music across the world, she finally saw fit to tackle the track herself for Covers. “That song, I just felt like it was time.” 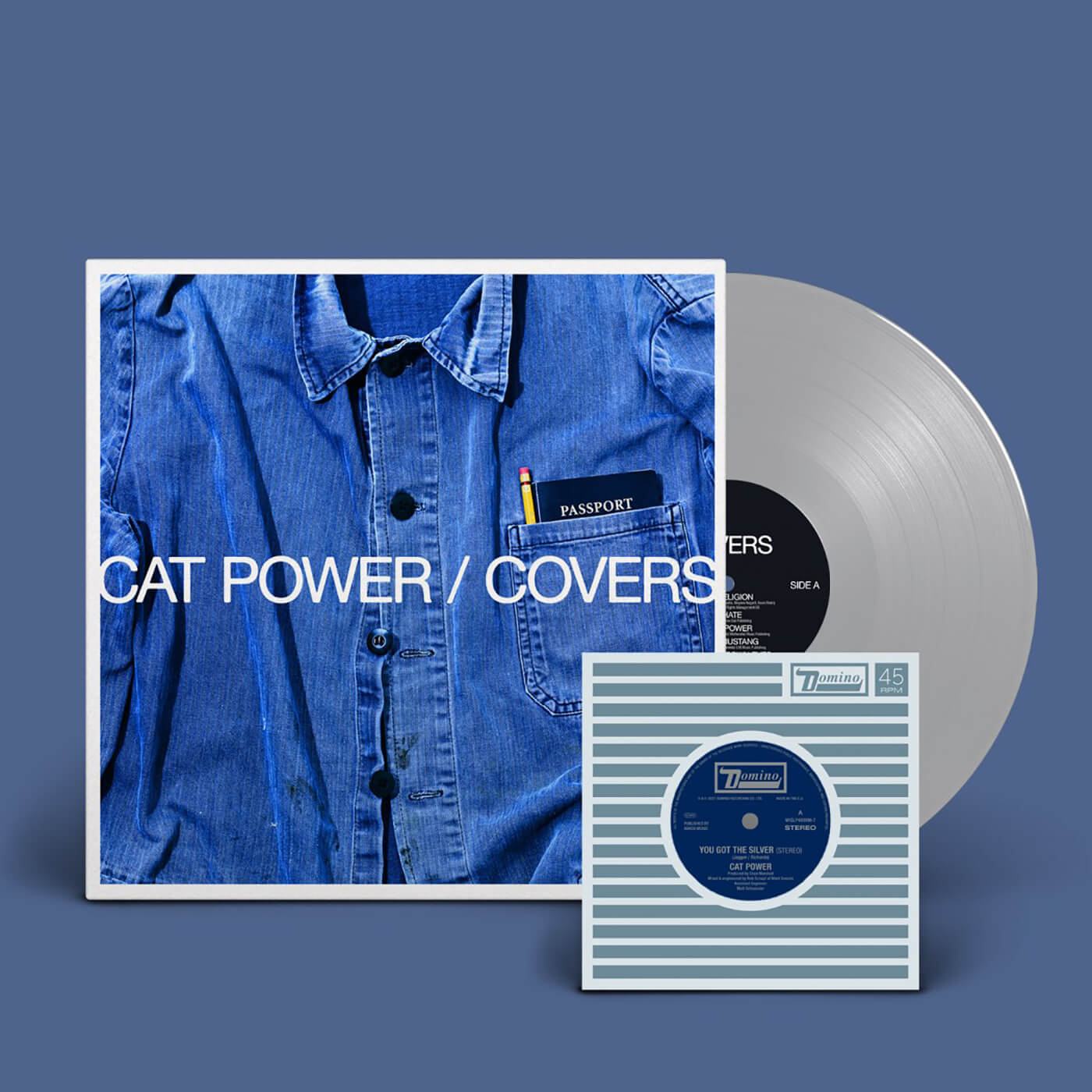 The powers that be

The entire Covers process, from recording to completion, took just a couple of months. But then Marshall’s creative fires were extinguished, the album sidelined by both COVID-19, and the death of Marshall’s grandmother.

“Covers was recorded in December 2019,” says Marshall. “In January, I mixed it. Then in March, I flew to New York so my friend [fashion photographer Mario Sorrenti] could take a picture for the sleeve, the inside jacket and the jacket. Then I flew to LA to do the Sean Penn songs for his movie Flag Day – and that’s when all hell broke loose. So I flew back home and just locked up and [the album] was set in a block of ice.”

That hell was the pandemic, which Marshall spent in Miami with her son, whose home-schooling schedule largely dictated mom’s daily duties. The pair would walk the dogs in the morning, and enjoy breakfast in a local car park, on a tablecloth that belonged to Marshall’s grandmother. “He turned five and six,” Marshall says of her son. “I taught him to read and write and do math. He’s the best in his class. I’m horrible at math.”

But it wasn’t all breakfast and arithmetic. There was also the collective misery of Trump’s presidency to bear, as well as Marshall’s own very personal loss.

“Losing my grandmother [just before the pandemic began], she’s like a mother too, and trying to make sure my son wasn’t afraid and felt secure… I was so unconcerned with the album. [There was] Trump and then the civil-rights movement started to really explode – thank god – here in America, so all those parts and pieces were my focus.”

It was Trump’s hateful rhetoric that first inspired Marshall to sing Frank Ocean’s Bad Religion on stage. Here on Covers, her homage is poetic and theatrical like Ocean’s original but, in a woman’s voice, the story and the mood inevitably take on a different feel.

This is the beauty of cover songs done with reverence for the original work. Elements of the original – whether it’s a harmony, a melody, pacing or theme – can be repurposed so that the cover stands on its own, while still encouraging listeners to revisit the original and perhaps pay closer attention to it. It didn’t occur to Marshall, once the pandemic set in, to alter anything on the album. Her approach, as ever, is to trust that her work has a timeless spirit.

“I hope with the music I write, the songs that I sing… I feel like art that moves me, touches me and teaches me keeps my head above water. To be a worker in song, I don’t take it lightly. I feel like it’s a gift that I do this. If I hear a song that I loved, it doesn’t matter if I’m 10 or I’m 99, it’s still going to mean the same to me: the pulse, the energy, the vibration, the strength I get from it and the love I get from it is going to be the same.”

One of the highlights of Covers is under-celebrated country pioneer Kitty Wells’ It Wasn’t God Who Made Honky Tonk Angels.

“It’s the first feminist song I ever heard,” Marshall says. “She’s bitching at Hank [Thompson], you know, it’s a call-back to his song [The Wild Side of Life], which is so punk-rock to be doing that back then.”

The song was a random discovery but one that stuck with Marshall for decades before finding a home on this album.

“I was 16 or 17 and my uncle had an antiques shack up in the mountains of North Georgia. I found this box of cassette tapes, four for a dollar or whatever, and I found Kitty Wells. I thought her name was so charming. I listened to her voice and it was like a mountain girl, just beautiful. I just fell in love with so many of her covers.”

Originally recorded by Wells in 1952, the song has been covered numerous times, by some of the biggest names in country music. Two other songs on Covers are covers themselves too. The layers and respect paid to artists in choosing to cover their work is something that appeals to Marshall, whose grandmother adored Billie Holiday’s 1944 version of I’ll Be Seeing You. “The best music on planet Earth are other people’s covers.”

Not playing it straight

From the $40 nylon-string guitar she picked up in Memphis in 2006 and subsequently played on Wanderer to the Fender and Danelectro guitars she’s accustomed to, Marshall is an eclectic player. Though she admits that she’s not technically proficient, she knows how to coax what she wants from an instrument, whether through strumming or using her voice as a guide for her studio bassists and guitarists.

Marshall still writes her songs on a guitar or piano, and on tour she’ll typically play her 1952 Danelectro and forgo the more vintage guitars she loves.

“For the live show, [I’ll play] a 1952 Danelectro and I’ll usually play a Fender Twin. I prefer the vintage but because they always crap out on tour, we’ll see what happens.”

As for a pick? Forget it.

For the love of song

Though the trio of covers albums is now complete, Marshall isn’t done with translating other artists’ songs through her own Cat Power dialect.

“I think because of MTV, the spectacle of the star and the new hit song, the new hit artist, the labels and the managers and publishing companies all wanted new, fresh blood,” she muses. “The tradition of covers has been buried. But I will always do it if I can continue to do what I do. I’ll always do it because I wouldn’t be a singer if I didn’t love songs.”

Covers is out now via Domino Records.