“It feels like I’m reacting to stuff that happened years ago”: Christian Lee Hutson on the long gestation of his Phoebe Bridgers-produced album

The singer-songwriter on his debut, how house fires make acoustic guitars sound better, and why having his “co-dependent” writing partner in the producer’s chair helped him realise his vision at long last.

Do not be deceived by the title of Christian Lee Hutson’s debut album, Beginners. This was an album five years in the making, a timeframe in which Hutson has amassed writing and performance credits for projects such as Boygenius, Better Oblivion Community Centre and more recently, on Phoebe Bridgers’ superlative second LP, Punisher.

Beginners has over-arching themes of youth, relationships and sentimentality among others, but can be considered more anthological, each song has its own narrative to tell. Works of fiction but peppered with fragments and alterations of real-life experience. We are so often used to siding with our narrator, but Hutson is unafraid to explore the devastation of faded romance, where there is no conceivable winner.

He writes with a reflective gaze, summarising, analysing and coming to understand how previous life experience can affect you later and how reflection can continually influence and change your perspective. Hutson’s songwriting heavily involves the acoustic guitar as a mainstay along with his vocals that offer a familiarity and sense of experience way beyond his years. This is fleshed out by infrequent visits of percussion, trumpet, violin and more.

The one to tie this together was frequent collaborator Bridgers, who took a seat in the producer’s chair for the record. “My favourite quality about Phoebe, as a producer is restraint. She knows when to say, ‘it’s enough’. If it’s just me on a guitar and vocals she’s not afraid of putting too little on a song. I feel like she’s not afraid to just have it resemble the rawest form.”

After meeting Bridgers through her ever-present guitarist Harrison Whitford, the pair began to share ideas and write songs together, from then they have become each other’s first port of call creatively. The word “symbiotic” comes to mind when thinking of their collaborative relationship, one with which Hutson agrees: “Even from the inception of those things that we’re working on, we’re at least involved in some way. By that definition I would say that it is a fairly co-dependent relationship”.

As friends, there are certain perks when working on a record together, especially compared to working with a stranger designated by a label and particularly when it comes to criticism. “The beauty of making a record with your best friend is that the communication is there if something is ever not working there’s not a stranger that needs to figure out how to communicate with you”.

When working with Bridgers on Beginners at Sound City Studios, the pair spent time working on Punisher, which was recorded in the same iconic venue, and saw Hutson contributing on guitar, vocals, lyrics and is even credited as ‘emotional support’ in the record’s liner notes. From an outsider’s perspective, the current LA scene seems to have a sense of rapid interconnectivity, with artists constantly appearing on the credits of each other’s records. “I’ve been really lucky to meet a bunch of really good songwriters here and good guitar players,” he agrees. “It’s been a really good place to see live music and get inspired by what people are doing”. 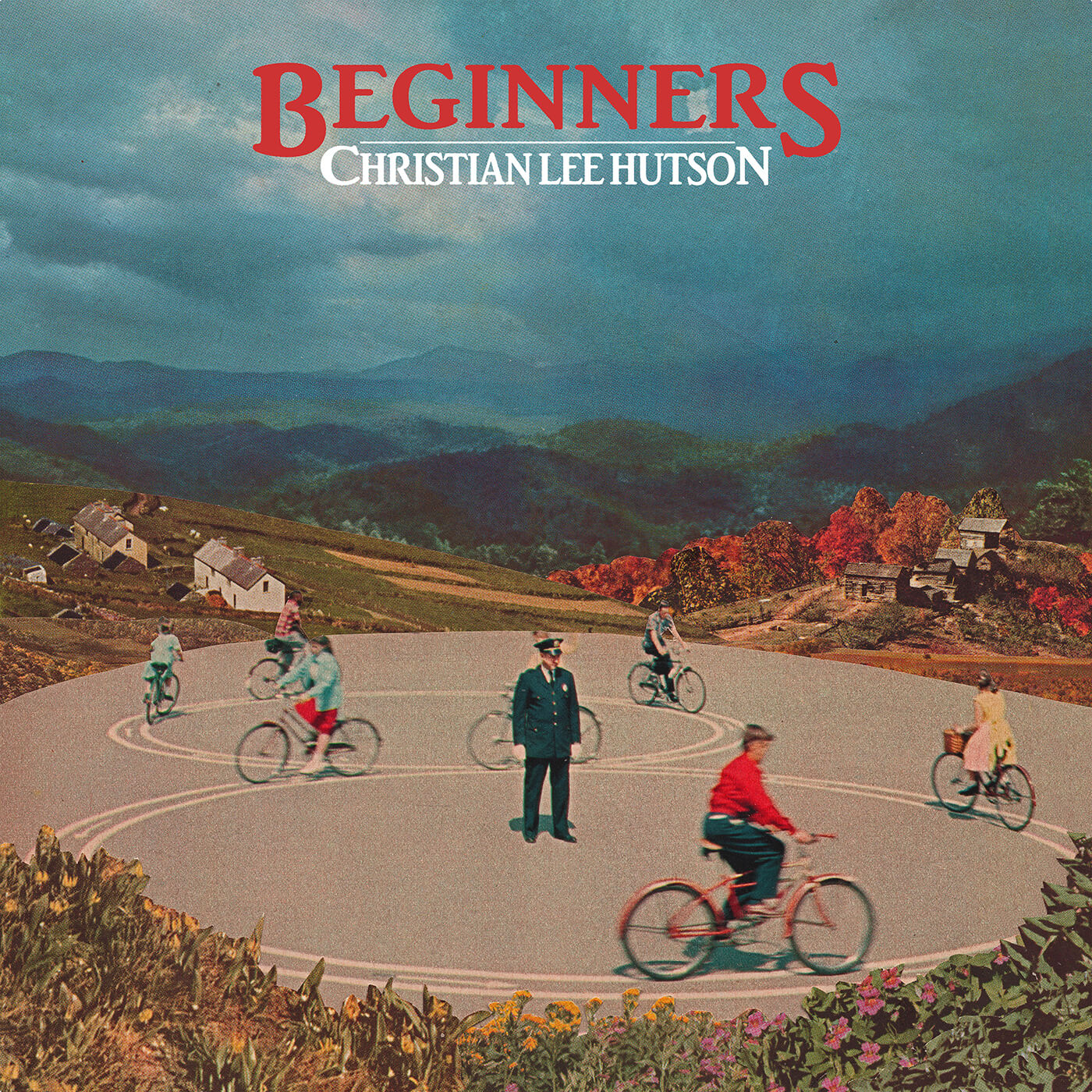 Bridgers might be wedded to her Danelectro baritone, but when it came to Hutson’s own record, Christian leaned on four or five different guitars involved, including a nylon-string loaded with a custom set of nylon baritone strings. The mainstay of the record, however, was a Sound City mainstay. “At the studio there’s an old J-50 that was in a house fire at some point and it sucked all the moisture out of it and it’s just the best playing sound guitar,” he enthuses. “For LA session musicians, or at least in my group of friends, it’s a famous guitar. It belongs to [Bridgers’ go-to producer] Tony Berg and it has been signed by Glen Campbell, they just call the guitar ‘Glen Campbell’. It’s really such a special guitar”.

At the age of 12, Hutson was gifted a Montana nylon-string guitar, with his mother’s innocent intention that learning an instrument would make him a more rounded student. Instead the academics went downhill as Hutson became obsessed with music, though perhaps not his first guitar… “I remember feeling frustrated because I just wanted to ROCK and I was just like ‘Waaaah why can’t I have a BC Rich Warlock?!’” he chuckles. “You know just the most rocking guitar I could think of!”

Instead he mainly stuck to the acoustic, developing a love of Elliott Smith’s songwriting and guitar playing that’s evident throughout Beginners. “I love his chord progressions and his sense of melody,” he enthuses. “I mainly learned a lot from listening to his music. Just musically, it taught me how to move around the guitar. I love how much is just packed into one instrument, I am always trying to figure out how to do that on a guitar as well. Just make it sound like several guitars. I learnt how to fingerpick from a combination of Elliott Smith songs and John Prine songs”.

In addition to Prine and Smith, Hutson cites Hank Williams (of whom he has a tattoo), Conor Oberst, Will Sheff of Okkervil River, and Dan Reeder as artists that have turned his head when it comes to how he thinks about songwriting.

“It’s like you were looking at a picture in one way this whole time,” he enthuses. “The picture being songwriting – and then they have just completely shifted the whole picture. It makes you realise that you thought you were seeing a dog the whole time but you’re actually seeing the face of a woman or a vase or something. I feel like this is what I miss the most about live music. For me seeing Phoebe playing her songs for the first-time sort of did that for me.”

A common thread between Hutson and Bridgers is the melancholy nature of much of their songwriting, but it’s not always something he finds the easiest to listen to

“Take Mount Eerie – the songwriting there is really raw. But when it’s really autobiographical and the circumstances of a person’s life are so, so sad, it’s hard for me to listen – even though I’m like ‘Wow this is a fucking amazing song.’”

From conception to completion, Beginners took about five years to make, with earlier versions not coming together in the way Hutson had quite imagined. “It was a lot of trial and error, adding a lot of stuff, trying it with a band,” he explains. “Then about two years ago Phoebe was like, ‘I would like to take a shot at producing a version’ because it still wasn’t exactly clicking. We just went in for a couple of weeks and made it and I loved it”.

Another shared trait that makes Bridgers and Hutson such good foils for each other is their shared penchant for story-driven songwriting. It’s something that Hutson wouldn’t mind expanding on at some point.

“I wanted to be an author when I grew up,” he explains. “But I haven’t attempted writing short stories or anything as an adult, but I think I would like to try that at some point. So much work has to be done by the listener which I like and helps the story because you just choose to mention specific things that will lead the listener to the next part of the story and fill in the gaps in their brain”.

For the time being then, he’ll continue to draw on his own experiences as the bedrock for his songs, reflectively looking back at his younger years in an attempt to make some sense of it.

“It takes me a long time to process things that have happened in my life or in the world or things that happened when I was a kid,” he concludes. “It’s like I’m on a delayed feed or something like that. Sometimes it does feel that maybe I’m reacting to stuff that happened years ago.”

Beginners is out now on ANTI-.