Clutch’s Tim Sult: The five pieces of gear I can’t live without

The guitarist for the legendary stoner rock band explores his approach to building a guitar sound.

Clutch have cemented themselves in stoner rock’s hall of fame, playing a stomping, groovy take on the genre – rather than the slowed-down Sabbath worship of many stoner bands, Clutch blast through up-tempo, riff-fueled hard rock with a doomy, bluesy edge.

Their latest record Sunrise On Slaughter Beach is no exception – packed wall-to-wall with head-nodding riffs and infectious grooves, alongside frontman Neil Fallon’s commanding baritone. And like the straight-to-the-point hard rock approach to the genre, the band’s gear is also distinctly minimalist – no pile of 10s of amps or metres-long chains of fuzz pedals here. Drummer Jean-Paul Gaster uses an absurdly stripped-back kit, and Fallon only picks up a guitar when it’s called for.

We spoke to lead guitarist Tim Sult about the five pieces of gear he couldn’t live without – and in keeping with that minimalist approach, his choices make up (aside from a tuner) the entirety of his current pedalboard. Let’s dive in.

“I probably over-wah. I’m probably going to keep overwahing. I might even overwah some more on the next tour. So you’re going to get a lot of wah pedal with me. That was really the first effect that I ever used live with Clutch. And I’ve never turned back.

“In terms of specific wahs – I’ve broken so many over the years. Tonally, I definitely love the Real McCoy Custom Wahs: – those ones always sound absolutely incredible to me. Yeah. But, you know, depending on the day and where we are, and, you know, I’ll just use whatever I have that’s working at the time. The Real McCoys probably cut the best of any wah that i’ve owned. Sometimes, with wahs, if I go too low on the pedal, the sound just goes away. But with the Real McCoys, it always cuts through loud and clear.”

“Phasers have just crept into my live tone over the years. I always love having a phaser. Over the years I was trying different modulation effects, flangers, phasers and I guess I would put wah in the same category as that, filters and so on. But I figured I needed just one on my pedalboard – for a while I was playing both a phaser and a flanger, and that was getting kind of ridiculous, but, over the past five years, I’ve always had a phaser on my pedalboard for both rhythm stuff and lead stuff.

“In terms of any particular phasers: Orange sent me one of their new 70s Phaser pedals. I’ve really only jammed it in my room on a practice amp. But it sounds exactly how I want a phaser to sound. I mean, I can’t really describe it and more than being perfect as of now. Okay, I mean, I might have a different opinion when I start playing it live. But as far as it goes, right now, it’s probably my favourite phasor I’ve ever owned.

“It’s definitely not an always-on kind of thing. Lately, I’ve been using a phaser on double-choruses. For the second repetition, it really brings the whole thing up – elevates the part.

“One of my favourite effects of all time is the reverse delay in the DL-4. We have a few like slower, jammy songs where we just improvise on them. Throwing out a reverse guitar solo is like, instant Jimi Hendrix, without having to play like Hendrix. That reverse effect is one of my favourite things ever. I could listen to that for hours, just jam on it and never get bored.

“There’s some tracks with a real tape reverse delay on them, but doing that with a DL-4 is so much easier than dragging a tape around. It’s great for the slower, groovier, more open songs.

“Originally I was drawn to the DL-4 because it had so many different options. Sometimes I just use the regular delay. For solo stuff. Also, it kind of gives it a good, good little wash. That’s not really too extreme.But if we’re talking about regular delay… 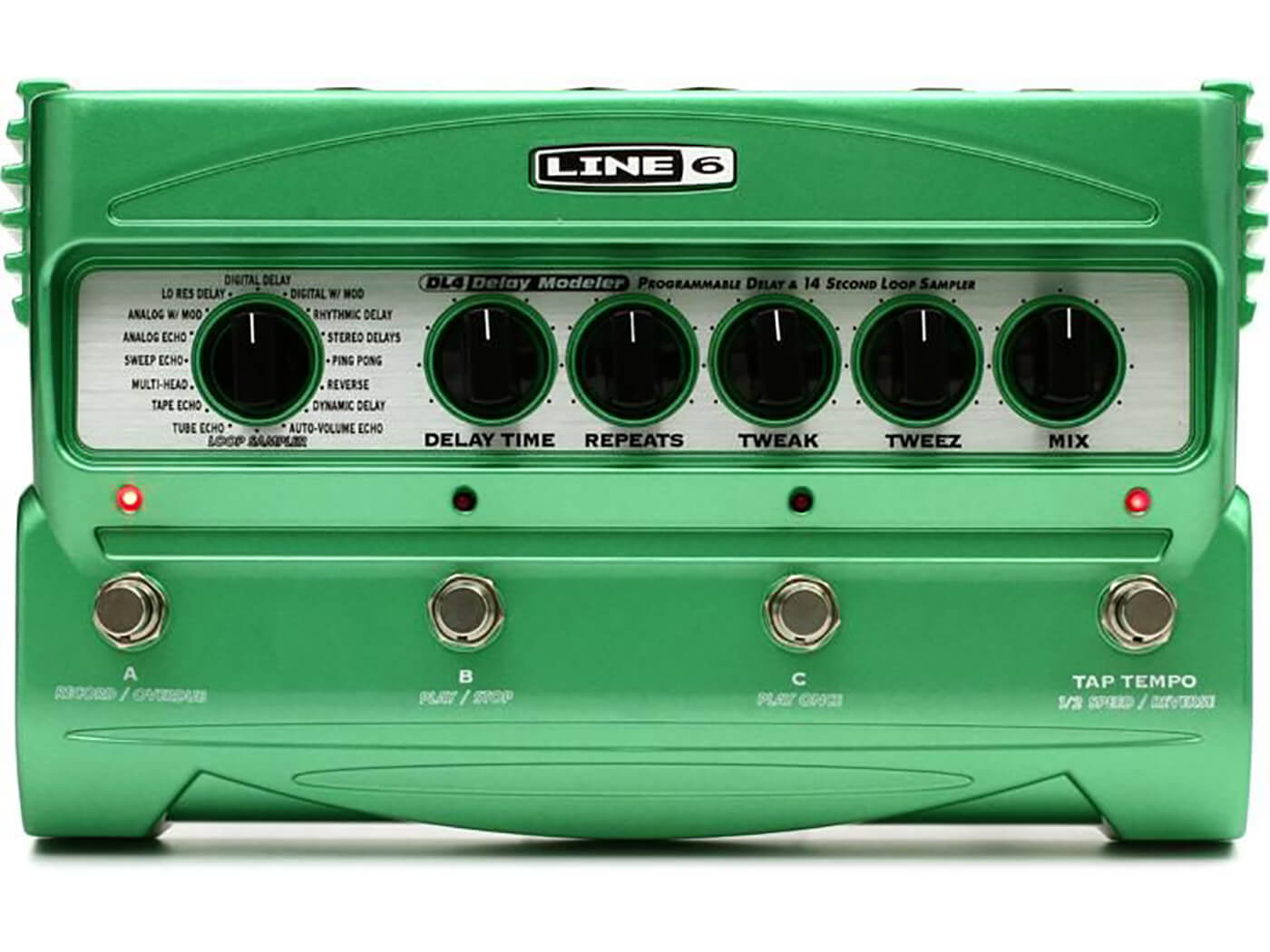 “It’s perfect. Nice and simple, and easy to find at Guitar Center. And I just love it. It’s easy to dial in a good delay. For me, with Boss delays, I have a hard time finding the right setting. And it’s always just completely out of control live, I never know what’s going to happen. But with the Carbon Copy, it’s easy, because it just has three knobs on it. You can get all crazy with it too, you know, just get down on the ground and start making all kinds of weird sounds.

“It’s on the board in front of the amp, and I’m really happy with how it sounds. I don’t ever want to not be using a Carbon Copy in my setup.”

The final pedal: an Electro-Harmonix POG, or Micro POG. And that is used quite a bit in the studio, especially on the new album. It’s kind of hard to hear where it’s being used, with the production on it. But I use it quite a lot live – especially on jammy kind of solos, especially on Cypress Grove. I just love it – making a guitar sound like bass. And that sort of weird organ sound. And for big open funky notes, it works really well.

But those are all the pedals that are on my board, other than a tuner. It would definitely be easy to balloon out into a bigger board – but that’s so much stuff to troubleshoot. For me, the less stuff, the better.

Sunrise On Slaughter Beach is out now.